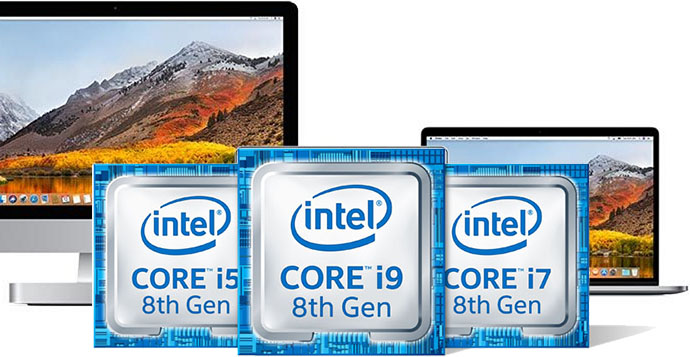 The most notable new chip is the first-ever Core i9 processor for notebooks. With six cores and 12 threads, Intel says the Core i9 is the highest-performance notebook processor it has ever designed. The H-series processor has a 2.9GHz base clock speed with a Turbo Boost frequency of up to 4.8GHz.

Given the Core i9 is a 45W chip, it is appropriate for the high-end 15-inch MacBook Pro and could be included in a refreshed version of the notebook as early as this year. Apple last updated the MacBook Pro lineup with Kaby Lake processors at WWDC in June 2017, so a Core i9 model could debut at WWDC 2018.

Of note, while the Core i9 processor allows for systems with up to 32GB of RAM, this is unlikely to apply to the next MacBook Pro, since low-power DDR4 RAM is still not supported. Back in 2016, Apple's marketing chief Phil Schiller said 32GB of standard DDR4 RAM would compromise battery life.

The eighth-generation Core processor family also includes new quad-core Core i5 and Core i7 processors with base clock speeds between 2.3GHz and 2.7GHz and integrated Iris Plus graphics. These 28W chips, part of the U-series, are suitable for future 13-inch MacBook Pro and Mac mini models.

Intel says the new Core i9, i7, and i5 processors for notebooks are based on its Coffee Lake platform and leverage its 14nm++ manufacturing process, enabling the chips to deliver up to 41 percent more frames per second in gameplay or edit 4K video up to 59 percent faster than the previous generation with the same discrete graphics, based on its internal benchmark testing.

As with Intel's Kaby Lake Refresh processors introduced last August, these new Coffee Lake chips pave the way for a quad-core 13-inch MacBook Pro should Apple choose to release one. The current lineup is limited to dual-core models.

Intel also expanded its lineup of eighth-generation Core processors for desktops today after an initial rollout last October. Two chips suitable for future 4K and 5K standard iMac models include six-core Core i5-8600 and Core i5-8500 chips with base clock speeds of 3.1GHz and 3.0GHz respectively.

The desktop lineup also includes six lower-power 35W chips with four or six cores and base clock speeds between 2.1GHz and 3.2GHz. While the current Mac mini lineup uses 28W chips, previous generations have used up to 45W chips, so the 35W processors could be suitable for future Mac mini models.

All in all, Intel has potentially laid the groundwork for a high-performance, top-of-the-line 15-inch MacBook Pro, quad-core 13-inch MacBook Pro models, a long-overdue Mac mini refresh, and updated iMacs as early as this year.

Looking further ahead, Bloomberg News on Monday reported that Apple plans to design and use its own processors for Macs starting as early as 2020. Intel shares saw their biggest price drop in two years following the report.

There have been plenty of other processors in recent years that have been passed over. And how often has a processor been announced by Intel and then Apple adds it in a new laptop 2 months later? Not gonna happen with this round of refreshes.
Reactions: imageWIS, ShaunAFC3, zemsantos and 24 others

MacRumors said:
All in all, Intel has potentially laid the groundwork for a high-performance, top-of-the-line 15-inch MacBook Pro, quad-core 13-inch MacBook Pro models, a long-overdue Mac mini refresh, and updated iMacs as early as this year.
Click to expand...

Hmm? Has it been that long? It's not something you tend to read about daily in the MacRumors comment section…
Reactions: ShaunAFC3, bwillwall, nitramwin and 7 others
S

...good one.
Reactions: Altis, zemsantos, iop and 74 others
A

I hope this confirms the core bump for those who were doubtful it would span the entire U-series and H-series lineup (despite it being leaked years ago).

It’s exciting to get the final CPU specs for the chips we’ll see in Macs this year, including the Mac mini, which we will (almost certainly) see this year.
Last edited: Apr 3, 2018
Reactions: ShaunAFC3

I need a Mac mini and I will buy for sure a MacBook Pro 13" quad-core
Reactions: ShaunAFC3, stylinexpat, thebryceman and 6 others
S

Butterfly gen 3 please, and 28W SKU in the nTB 13".
Reactions: ShaunAFC3, martyjmclean, JoEw and 4 others
J

What’s the deal with Intel dragging its feet to include lpddr4?
Reactions: Internet Enzyme, stylinexpat, dmi and 30 others

You can get a Dell with the new chips next months.
Reactions: ShaunAFC3, stylinexpat, jedifaka and 16 others

could be suitable for future Mac mini models
Click to expand...

JohnDoe98 said:
What’s the deal with Intel dragging its feet to include lpddr4?
Click to expand...

JohnDoe98 said:
What’s the deal with Intel dragging its feet to include lpddr4?
Click to expand...

Yet Apple will be the one blamed if they use this chip in the next MBP and only include 16GB RAM.
Reactions: Internet Enzyme, Val-kyrie, MacsRuleOthersDrool and 18 others
M

I don't care if it 'compromises battery life', I know what I'm getting into. 32GB is not a luxury anymore, it's needed for anyone who does heavy development work on the go.

90% of the time, I'm powered, anyway; the laptop just gives me the freedom to take that power anywhere.
Reactions: CertFX, ShaunAFC3, stylinexpat and 53 others

Here's how the updates should go -

All the CPUs necessary for the updates have been formally announced by Intel, so it's really just a matter of when Apple wants to pull the trigger. I would expect that June at WWDC is the most likely venue. They then would also be able to announce 6c/12t 21.5"/27" iMacs as well and show off the Mac Pro if it is ready to demo.

Here are some other wildcards -

- Mac mini - will either be part of the modular Mac Pro (Base Compute Unit) or stay a standalone and get the Core i5/i7 with the integrated Vega GPUs. These could become their entry level AR/AI developer boxes. My guess: 50/50.

- 12"/13" MacBook/MacBook Air - Intel has yet to launch the 8th Generation Y-Series chips for the 12" MacBook, but with the 12"/13" MacBook/13" MacBook Air rumors floating around, it doesn't matter quite yet. Intel also has another 1-2 months to announce the CPU anyways. My guess: 100% something in that space.

- 17" MacBook Pro - The time is ripe for Apple to re-launch a new 17" MacBook Pro for Pros. Create a thicker chassis for plenty of battery and heat dissipation, match the current aesthetic, equip it with a 3840x2400 P3 display, 32GB DDR4 standard, an AMD Vega GPU that can drive the internal Retina at a decent frame rates plus external 5K displays and up to 4TB of SSD. The only CPU choice would be the Core i7-8950HK. My guess - 10% chance.

Intel also launched 3 new chipsets for these CPUs, the HM370, QM 370 and QMS380. Apple typically uses the HM-series, and the HM370 supports up to 4 ports of USB-C 3.1 Gen 2 (10Gbps), which would be very nice for upping the number of ports and the bandwidth of a 12"/13" MacBook/MacBook Air. Exciting times ahead, for sure.
Reactions: mochatins, MilKat10, ShaunAFC3 and 16 others
H

yea I miss the early intel/apple days where Apple was getting first pick on processors. Its been sad how slow Apple has been to up date machines. Mac Pro 5 years or so and the Mac mini. For a company this size I think they can afford to throw a updated chip into an existing design. And Keep this stuff user serviceable too.
Reactions: bwillwall, stylinexpat, jeffirl and 11 others

This is what I want in my 13" MacBook Pro. I got in on the 2017 model which has been excellent but was saddened Intel was behind on Coffee Lake last year. To a degree I'm looking forward to apple moving to ARM but what would that mean for boot camp? I still need windows and like to have one machine...
Reactions: ShaunAFC3

Seems too late to be in the next refresh. But let's keep hope alive.
Reactions: ShaunAFC3 and StoneyG

Man, a six core mac mini would be an instant buy...
Reactions: Substance90, kazmac, Cisco_Kid and 19 others 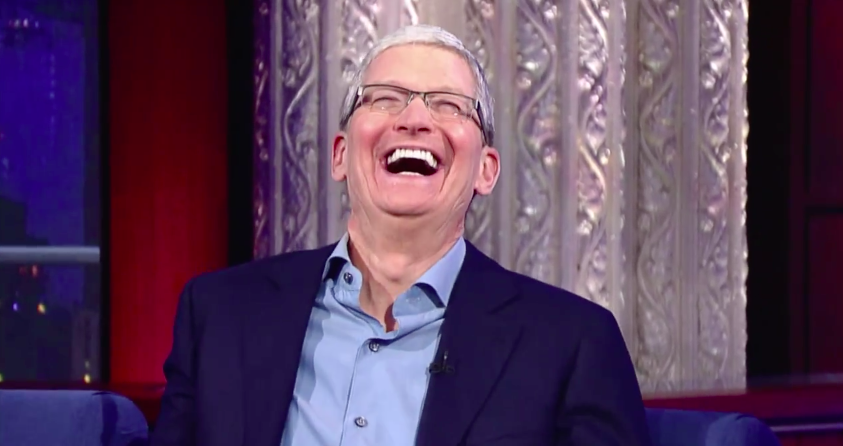 Whose going to buy a new intel mac now we know that Arm based ones are the future ?
Reactions: ShaunAFC3, Val-kyrie, stevekr and 1 other person

6 core i9 MacBook Pro with a 4K edge to edge 17 in display. iMac Pro to go, starting at $3599
Reactions: ShaunAFC3, Lone Deranger, thebryceman and 7 others
A

I mean, really, just take the components straight out of the MBP put them in a little box and majority of people will be SUPER happy.
Reactions: ShaunAFC3, kazmac, bwillwall and 19 others

If you think this is bad, wait until Apple tries to sell you a Mac with some mobile grade Arm processor, lol.
Reactions: stylinexpat, elhungarian, Powermichiel and 20 others
You must log in or register to reply here.
Share:
Facebook Twitter Reddit Email Link
Register on MacRumors! This sidebar will go away, and you'll see fewer ads.
Sign Up
Top Bottom