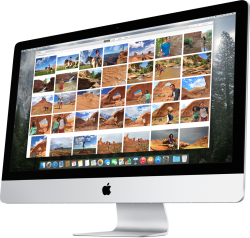 Apple is working on enhancing the Photos app in both iOS 10 and OS X 10.12, reports Japanese site Mac Otakara. The apps will reportedly be updated with new features to put them on par with the now-discontinued iPhoto 9.6.1 for Mac and iPhoto 2.0.1 for iOS.

It is not clear exactly what features will be added to the apps, but Mac Otakara says iPhoto 2.0.1 included tools for editing EXIF information and touch-based brushes for adjusting brightness and other parameters on only specific parts of a photo. Similar editing tools could be added to the iOS version of Photos.

On OS X, the Photos app will see improvements, but Mac Otakara says Aperture-level functions will not be added to the app.

We don't have much information about OS X 10.12 and iOS 10 as of yet, but a recent rumor has suggested Siri integration will be a headline feature in OS X 10.12. Siri on the Mac has been a long-desired feature and the personal assistant will likely be able to do things like adjust system settings, answer quick queries, and open apps.

OS X 10.12 and iOS 10 will likely be coming in the fall months, but we can expect to see a preview of the software at WWDC 2016, which is typically held in June.

bring back the ability to see all photos on the Places maps, not just year or moment.
Reactions: macbd, valerieobrien, OldManWithers and 34 others
Comment
M

I want graphical improvements. El Cap's animations are so inefficient and slow.
Reactions: attila, AleXXXa, Sandstorm and 6 others
Comment
M

Hopefully iCloud Photo Sync will start to operate in a timely fashion. I usually have to AirDrop photos I've taken on my iPhone if I want to use them on my Mac any time soon.
Reactions: OldManWithers, MLJH, Sandstorm and 9 others
Comment

Hope they make it easier to upload photos on the Mac (like when clicking the "upload" button on a website).
Last edited: Feb 25, 2016
Reactions: OldManWithers, jgelin, rog and 3 others
Comment

Seems to be the new tech trend: remove, complain, add it back, praise, rinse and repeat.
Reactions: AquaMac93, OldManWithers, attila and 31 others
Comment
P

for the love of god just let me lock the photo app with TouchID. the most obvious thing since ... ever.

yes, we can "hide" pictures in a "hidden" folder. may as well label it LOOK IN HERE
Reactions: Skoal, attila, AleXXXa and 25 others
Comment

2) Tagging on iOS
Reactions: attila, AleXXXa, Simplicated and 2 others
Comment

bushido said:
for the love of god just let me lock the photo app with TouchID. the most obvious thing since ... ever.

yes, we can "hide" pictures in a "hidden" folder. may as well label it LOOK IN HERE
Click to expand...

I like that idea but what would be even better is to lock photo's individually on top of what you suggest.
Reactions: ccard3dev, Borin, Glassed Silver and 5 others
Comment

Let me host my own Photos server! Make it part of OS X Server!
Reactions: jjduru, -hh, jgelin and 13 others
Comment
T

Interesting. The biggest thing keeping me out of using iCloud Photo Library is the mess it seems to make of your photos.

Having taken photos on holiday, I like to put the ones I want to keep into an album and delete the rest (clearing my camera roll). When I turned iCloud Photo Library on, my camera roll disappeared and "All Photos" showed me everything - stuff that was in an album, stuff that wasn't. My latest photos from WhatsApp, my latest camera roll photos riiiighhtt the way back to the oldest photo in the oldest album in Photos.

If there was a "unfiled Photos" album. Or a "Camera Roll" album that existed in the cloud (but that I could edit & delete from any iCloud device) that would solve the problem, I'd pay for more iCloud storage and be a very happy camper.
Reactions: SkippyThorson, ccard3dev, big-ted and 3 others
Comment

How about improvements to the Finder? You know, like proper cut/paste commands and folders on top?
Reactions: Darrensk8, PseudoRegister and pat500000
Comment

bushido said:
for the love of god just let me lock the photo app with TouchID. the most obvious thing since ... ever.

yes, we can "hide" pictures in a "hidden" folder. may as well label it LOOK IN HERE
Click to expand...

I'm pretty sure you're in a minority of people who think this feature should be added.
Reactions: Slix
Comment

The only issue I had with Yosemite, only in terms of its animations, was that the rubber band effect (when you'd scroll down to the bottom or up to the top of a page) would lag when it would play. Other than that, Apple's animations had been perfectly efficient until El Cap. In El Cap, I noticed speed improvements all throughout, but then I noticed that general animations were using much more horse power and actually lagging on older machines or machines with weak graphics cards (like modern MacBook Airs or Mac Minis).
Reactions: Vanilla35
Comment
N

Now all that have to do is put a decent RPM hard disk in them and maybe they'll have a useful platform.
Comment

I kinda like the Photos app and welcome all improvements to the app. And I'm looking forward to WWDC 2016, to see what improvements we will actually get for the Photos app on both iOS 10 and OS X 10.12.
Reactions: Easttime, elTylerr and BJMRamage
Comment
B

I still can't over how Photos ditched iPhoto Events. I know they're in there somewhere, but finding them ain't intuitive. And I miss badly the ability to group and label batches of imported photos. It seems like the obvious thing people would want to do with their photos. (Am I missing some easy way to do this in Photo?)
Reactions: OldManWithers, Darrensk8, davemchine and 5 others
Comment
C

bladerunner2000 said:
How about improvements to the Finder? You know, like proper cut/paste commands and folders on top?
Click to expand...

I guess I'll need to start making the move over to Lightroom, I can't imagine Aperture is going to keep working for me very well.
Reactions: -hh, AleXXXa and rfrmac
Comment

I'm still a dedicated Aperture user, hoping it continues to run fine in 10.12. My hopes for Apertures features all ending up in Photos are next to none.
Reactions: morteny, arthography, Glassed Silver and 7 others
Comment

I also want Apple to bring back colored icons in finder; considering how fruity things became with Yosemite, you'd think they would add back colored icons. It's way too uniform, and it makes it harder to quickly identify things by their look. Now I have to focus more on the label or icon itself. I know they got rid of that well before Yosemite, but it's still annoying me. Lastly, the fact that color labels are dots is the most retarded thing I've seen. The whole point of highlighting all of the text is so that the folder I highlight stands out. I couldn't care less about the meanings associated with the labels. It's also kinda stupid how you can put more than one dot on a file. What's that supposed to do? I use these labels for VISUAL purposes, not anything extra.
Reactions: colourfastt, Sandstorm and Slix
Comment

bladerunner2000 said:
How about improvements to the Finder? You know, like proper cut/paste commands and folders on top?
Click to expand...

Regarding folders on top: no. Absolutely not. The notion that folders and files should be handled seperately is completely retarded. I've been wishing Windows would knock it off for the last twenty years.

Just so you know, .app, .pages, .key, .numbers, and many other "file types" in OS X are actually folders (called "bundles"). You can right click and open them if you'd like to browse their contents.
Reactions: elTylerr and colourfastt
Comment
T