The second major update to iOS 9, iOS 9.2, was released this morning, with a long list of bug fixes and improvements to features and apps like Apple Music, News, Mail, Podcasts, Safari, iBooks, and more. There are quite a few outward-facing changes tweaks and changes to the operating system, and we've gathered up a list of the major new features below.

News - Apple's News app has been updated with features that are designed to make it more attractive to users and publishers. As outlined by Re/code, News will now include lists of top stories curated by Apple editors and published a "couple of times a day." For publishers, Apple is also implementing integration with Comscore. 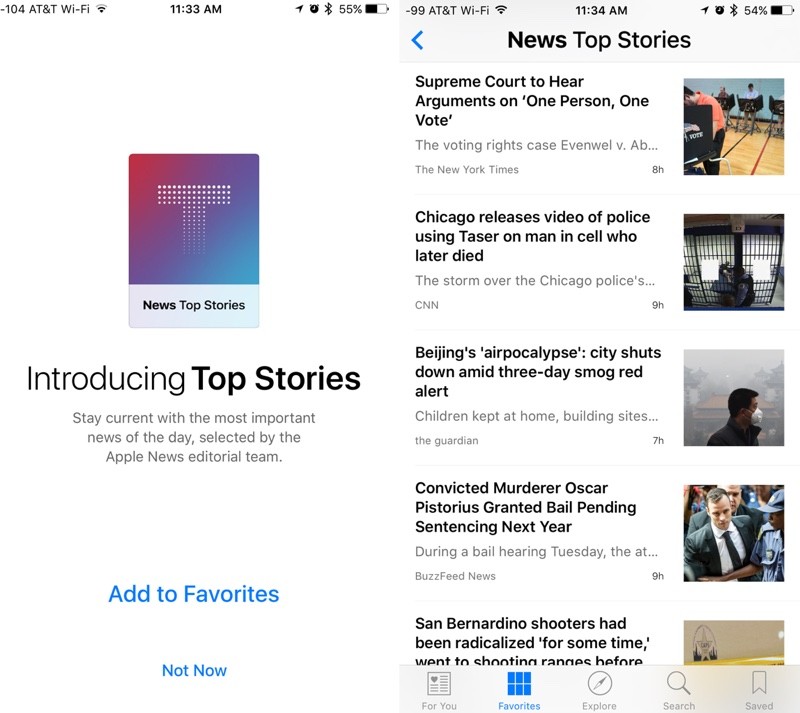 AT&T NumberSync - iOS 9.2 adds support for AT&T's NumberSync service, which is an expansion of Wi-Fi calling. As outlined in Apple's updated Wi-Fi calling support document, it is now possible for AT&T users to place Wi-Fi calls from their iPads, Apple Watches, and Macs (with OS X El Capitan) even when an iPhone is not nearby.

Continuity previously allowed a similar feature, but required an iPhone to be nearby as it used the phone's cellular connection. Similar advanced Wi-Fi calling features are also available to T-Mobile and Sprint users.

Apple Music - There are a lot of small tweaks to Apple Music to remove various pain points. When adding a song to a playlist, for example, it's now possible to create a new playlist instead of having to use an existing one, and playlists are ordered by most recent changes. There are also clearer indicators for which songs have been downloaded, and albums or playlists from iCloud Music Library can be downloaded by tapping the iCloud download button. The classical music catalog in Apple Music has been improved with works, composers, and performers. 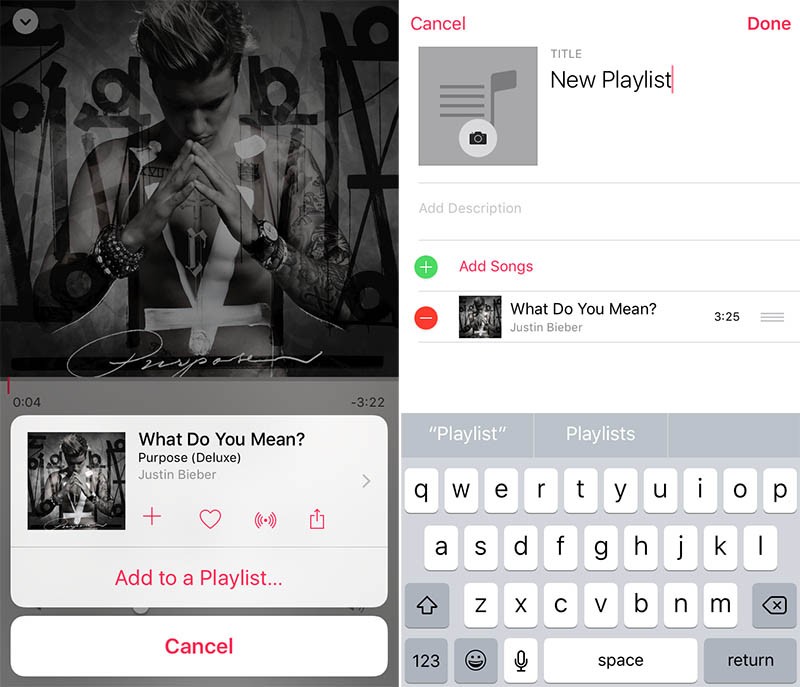 Mail Drop - For the first time, Mail Drop can be used on iOS to send attachments up to 5GB in size. Mail Drop is a feature that was previously limited to the Mac version of the Mail app.

iBooks - iBooks includes support for 3D Touch, allowing users to peek and pop into pages from the table of contents, notes and bookmarks, or search results with force press gestures. iBooks also includes support for listening to an audiobook while browsing a library, reading other books, or viewing the iBooks Store. 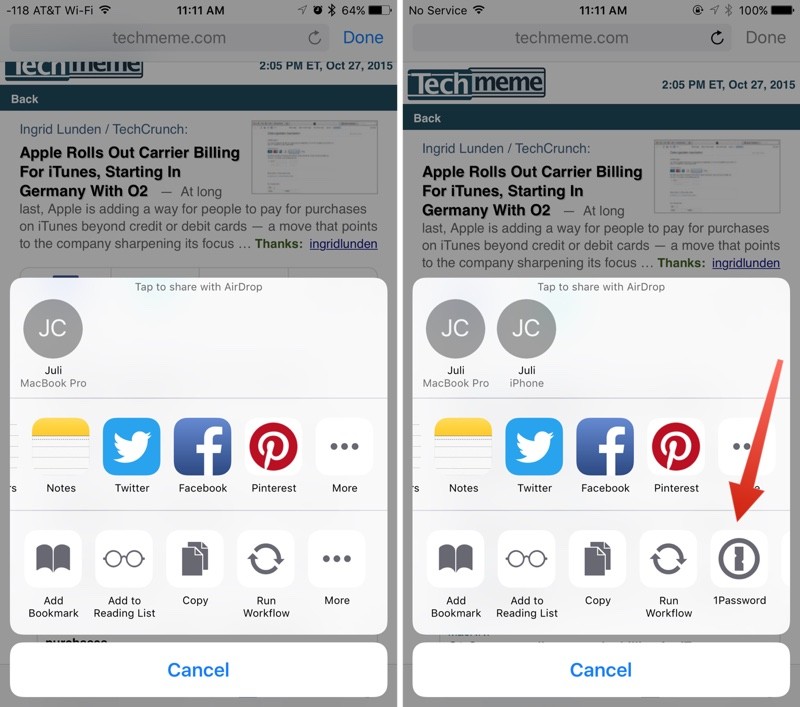 In the Hipchat app for iOS, clicking a link brings up an in-app browser. In iOS 9.1, seen on the left, there's no option for third-party extensions. In iOS 9.2, seen on the right, there's support for third-party extensions like 1Password.​
Unresponsive iPad Pro Fix - Apple has updated its support document for unresponsive iPad Pros to indicate that iOS 9.2 or later may prevent the issue from continuing in the future.

We'll be updating this tidbits post should any new features in iOS 9.2 be discovered. Our dedicated iOS 9 forum is also a great place to get more details on the new update, as users are discussing all of the changes that have been discovered in iOS 9.2.

The new update is currently available to all users with an iPhone 4s or later and can be downloaded over-the-air by going to Settings --> General --> Software Update.

still no fix for iPad Pro?
Reactions: AleXXXa and alecgold

Edit: Thanks for the link

I had no idea what Mail Drop was until this moment. Thanks for the tip!
Reactions: drumcat
R

Other Music improvements -
Adding a song to a playlist you've made available offline, will auto download that song.
Downloaded or added "dynamic" playlists, i.e. "Alternative A-list" will auto update and download the new songs.
Reactions: nortofthe13th, distemp and playaproved
K

Unfortunately, NumberSync stopped working for me. It worked on the 2nd beta, but not the last build.

I've wanted camera support since the advent of the iPhone. Glad to see this is finally supported.
Reactions: jyax, Radeon85 and eyeseeyou
C

Is number sync not comparable with all macs? It's working perfectly on my MacBook Air but I do not have the option on my mid 2010 iMac.

**both on uptodate operating systems.

USB Camera Support!!! OMG Took them long enough. Best feature for me! I don't have to deal with stupid WIFI SD cards anymore.
Reactions: jyax and 0970373

Sweet, hopes this brings improvement to my iPhone and MacBook Pro personal hotspot. That has been aweful for quite some time!
And my iPP can connect to my iPhone every time without a hitch (but doesn't need it because it has LTE).
A

Multi tasking seems to have been updated. No blur on the side and you swipe through one screen at a time. Still prefer the way it was done in iOS 8.

Edit: this is only the case when reduced motion is turned on.
Reactions: legacyb4 and ike1707

Had the same reaction, only to find out it doesn't work with my iPhone6S.
Hopefully, a temporary bug cause it still says ''Device not supported'' for me with my Canon DSRL. Or we might need to have a new camera adaptor like the one they released for the SD card reader.
Last edited: Dec 8, 2015

Some info on how to enable NumberSync (if necessary) would be nice.

Attirex said:
Some info on how to enable NumberSync (if necessary) would be nice.
Click to expand...

Jimmy James said:
I've wanted camera support since the advent of the iPhone. Glad to see this is finally supported.
Click to expand...

I couldn't believe when I first plugged the adaptor into my iPhone that I didn't work. Very pleased to see its finally supported!
Reactions: Radeon85

Attirex said:
Some info on how to enable NumberSync (if necessary) would be nice.
Click to expand...

Go to settings>general>about you will get a prompt to update carrier settings. Once you have completed this go to setting>phone>calls on other devices... You will see the option to enable in there.
Reactions: xdhd350, Gjwilly, megfilmworks and 3 others

What fix are you looking for?

It's ABOUT TIME the camera connection accessories are finally supported on the iPhone! I cannot comprehend WHY they weren't supported before. I'm a lot more likely to have my iPhone with me than my iPad when I'm out taking photos, and being able to transfer the photos to my phone to share them online is extremely useful.

This always seemed like an artificial limitation to me, and I'm glad it's gone.
Reactions: scarecrowmac

Not appearing on any of my devices yet...

Tried the News app (not available in Mexico) but Flipboard is vastly superior. Maybe in iOS 10...
Reactions: javco
M