iLounge reports that it has received a handful of details about what may be in store for the second-generation iPad. According to the report, the information comes from a source that has proven reliable in the past but that has cautioned that this information is preliminary and thus some caution should be exercised.

First, the source indicates that Apple is indeed building near field communications (NFC) capabilities into the next-generation iPad and that the company is working to develop accessories that can interface with the NFC/RFID chips included in the device.In the most basic implementation, an accessory could announce its presence and potential functions to an iPad or iPhone without the need for a Bluetooth or similar connection; our source suggests that an otherwise simple case could include a radio chip so that an inserted iPhone or iPad could go into power-saving hibernation mode automatically. More complex accessories will go far beyond that.Second, Apple may be shifting from the current aluminum shell for the iPad to one made of carbon fiber in order to reduce the weight of the device. While carbon fiber iPad shells have reportedly been spotted, it is unclear whether they will make their way into final production models. 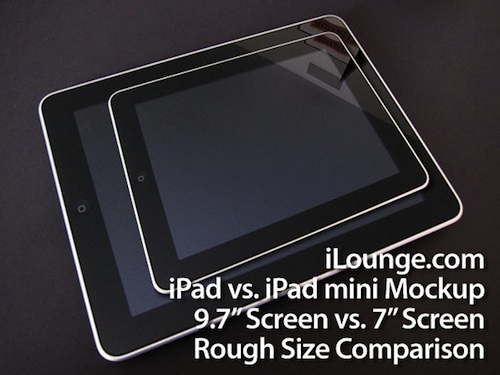 Earlier iLounge mockup of 7-inch iPad​
Finally, iLounge's source indicates that Apple has not yet abandoned the idea of a smaller iPad carrying a 7-inch display, despite Steve Jobs having criticized similar tablets as "dead on arrival" due to what Apple feels is an inability to offer a satisfactory tablet experience with the smaller screen real estate. According to the source, one of Apple's suppliers has been asked to manufacture a component that would be used in a 7-inch iPad, but it is unknown whether Apple plans to bring the device to market.

Just give me a faster processor and some type of improved display... even if it isn't "retina".
S

There's gotta be a better mock-up than the ilounge one that's at least not a trapezoid.
D

Only if they include sandpaper with it Apple-logo shaped of course.

Carbon fiber? I seriously doubt it. Apple's all about the aluminum.

Will be very surprised if there are two sizes available! I didn't think that Apple would do that, but now I'm not so sure...

Now people are just saying anything and it's on this front page.

7"?? This is still alive? One day Apple will go up to 12" and the world will be perfect. Magical rainbows will shoot out of your butts and unicorns will prance as Apple gets it right.
L

7 inch iPad will not come out in my eyes. It's not like Apple to go back on what they say.

Well, that's sure a step up!
K

Please just give us dual core CPUs and GPUs. And a decent quality webcam

Personally, I would go with the 10" (unless in person the 7" just really managed to sway me), but I really think Apple is grossly overlooking the potential for a 7" tablet. There are many, many situations where 7" would be the perfect size.

For example, I remember hearing that several restaurants are testing the use of iPads as a way of taking peoples orders. Would you really want to lug the iPad in it's current size around with you all day? 7" would be the perfect size.

Apple would miss out on the opportunity on a huge share of the marget if they forgo the 7" option. With that said, I still think the 10" would sell more, but 7" is still practical for many cases. In fact, I guarentee you a lot of people (on macrumors) would even buy BOTH sizes! haha
R

Darth.Titan said:
Carbon fiber? I seriously doubt it. Apple's all about the aluminum.
Click to expand...

Right now, that's true. But they also used to be all about transparent plastic and the color white.
I don't see why carbon fiber wouldn't make it into their products at some point.

I just want a release date or an event date

Regardless of what the iPad 2 has, I'm still gonna buy it
J

Darth.Titan said:
Carbon fiber? I seriously doubt it. Apple's all about the aluminum.
Click to expand...

I'm no expert, but carbon fiber costs may well be low enough to use on an iPad.. after all, its only the back casing, with the front being all glass.

And the iPad could sure do with being lighter.. I don't use it any more while taking a dump. I get dead legs..
N

Macrumors fail at mentioning a 7" iPad, it will never come out, thought Steve made it clear enough?!

The few days leading up to the first iPad featured a surge of rumors, all of which failed. 1080p! chess! solar powered! thumbprint reader! cameras! etc.

We're close enough to stop playing "Telephone" with speculations and just wait for the real thing.

Can someone teach me about the uses of Near Field Communications? I still don't understand what that would enable for the iPad. I'm not familiar with the concept. Thanks.
K

Unless youre just a nancy, the ipad isnt anywhere near too heavy to carry around
L

somairotevoli said:
There's gotta be a better mock-up than the ilounge one that's at least not a trapezoid.
Click to expand...

Carbon fiber iPad? No thanks, tacky, too much aftermarket souped-up car feel.

rickdollar said:
Right now, that's true. But they also used to be all about transparent plastic and the color white.
I don't see why carbon fiber wouldn't make it into their products at some point.
Click to expand...

I agree with you, and who knows what Apple has up their sleeves. But at this point in time, I'd be shocked to see carbon fiber make it's way into their products.

nexsta said:
Macrumors fail at mentioning a 7" iPad, it will never come out, thought Steve made it clear enough?!
Click to expand...

Steve has also "made it clear":

-No Mac App Store
-No Apple eBook reader
-No video iPod
-No Apple tablet
-No Apple cell phone
-No need for a camera on the iPod touch
-No plans to make the iPad hardware switch user customizable between mute and screen lock
-No third party apps on the iPhone
-No raising iTunes prices
Last edited: Feb 4, 2011
L

kavika411 said:
Can someone teach me about the uses of Near Field Communications? I still don't understand what that would enable for the iPad. I'm not familiar with the concept. Thanks.
Click to expand...

You could use the device to pay for something. (Although this seems more useful on phone.)

If you were streaming a movie from the device to your TV and walked into another room it could sense the change and move the streaming to the other TV (purely hypothetical).

An induction charging pad could recognize the device was placed on it and start charging -- rather than always sending out a charging pulse.

Two devices could recognize their proximity to each other.

Your car could unlock the doors as you approach it.

The device could sync up when you set it down next to the computer.

Basically it is just a short range radio. It has a lot in common with the many radios already found in such devices (WiFi, Bluetooth, etc.) and offers a few other options.
R

MarximusMG said:
I agree with you, and who knows what Apple has up their sleeves. But at this point in time, I'd be shocked to see carbon fiber make it's way into their products.
Click to expand...

I would be surprised to see it now, as well.
But really how much weight savings would there be with a carbon back vs the current aluminum? I think where they could shave off the most weight would be in batteries, which probably make up the bulk of the device weight.
But I'm sure it will be a while, too, before batteries become much lighter and store the same amount of power.
You must log in or register to reply here.
Share:
Facebook Twitter Reddit Email Share Link
Register on MacRumors! This sidebar will go away, and you'll see fewer ads.
Sign Up
Top Bottom