While Apple touted the power of the new A8X chip used in the iPad Air 2 at the company's media event last week, the company as usual opted not to disclose exact specifications on the part, leaving the details up to rumor and speculation until the device starts making its way into the hands of users and teardown experts.

But with Apple shipping out orders to customers for delivery as soon as tomorrow, it appears that at least one user has already gotten his or her hands on the iPad Air 2 and run a Geekbench 3 benchmarking test on it (via Gizmobic). If the result is genuine, and Primate Labs founder John Poole tells MacRumors that it appears to be, it reveals that the A8X contains an unusual triple-core CPU configuration running at 1.5 GHz and paired with 2 GB of RAM. 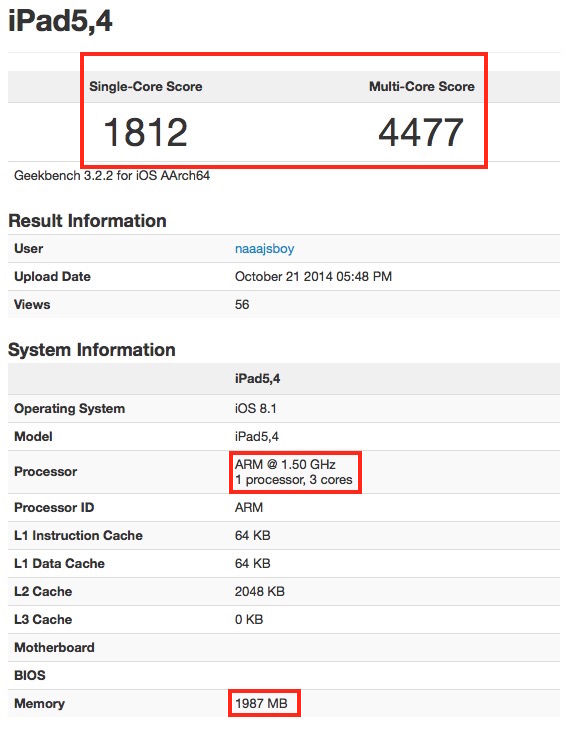 More details will undoubtedly be unveiled in the coming days as teardown experts take the iPad Air 2 apart and chip experts examine the internal layout of the chip.

Odd core numbers are pretty much non-existent in ARM-world, so this is interesting to see. Triple core also helps explain how they got to 3B transistors. Too bad geekbench doesn't accurately report that "L3" cache.
Reactions: ShaunAFC3
B

Well, I guess it has 2GB of RAM.
Reactions: ShaunAFC3
K

Well, didn't they say it had 3 billion transistors?

And they also said the iPhone 6 had 2 billion transistors.
C

Hmm.. this is now tempting me to retire the old iPad 2 and get and Air 2
Reactions: ShaunAFC3
T

Looks like we can finally expect 2GB of ram in the iPhone 6S...
Reactions: ShaunAFC3

impressed but not yet convinced...

So it has 2 GB of RAM. Now what will the primary gripe be?
Reactions: ShaunAFC3

Only 2GB?, wake me up when it has 4GB.
Reactions: ShaunAFC3
S

One core is disabled like in previous iPads and iPhones ?
B

"Safari won't keep my 20 tabs up without them refreshing!"
Reactions: ShaunAFC3
E

If this is true. I'm glad I went ahead and ordered my iPad Air 2 on pre-order day.
Reactions: ShaunAFC3

No comparison to the existing iPad Air? I guess I'll go do my own research...

EDIT: So it looks like iPad Air was at 1467 single core and 2656 multicore. So decently better on single core performance, but nearly double multicore.
Reactions: ShaunAFC3

The iPad air 2 crushes my 2010 MacBook Pro. This is how far we've come...
Reactions: ShaunAFC3 and Billy95Tech
M

this iPad will be screamer! wish apple made same great updates to other products this year - yes mini line, mac or ipad, I am talking about you
Reactions: ShaunAFC3 and Billy95Tech

Not that odd when you consider Apple has been designing their own chips for years now.

Sure, they may start with ARM architecture....but Apple HEAVILY modifies these essentially creating their own chips.

Which is why they've been so successful making powerful, efficient chips for so long.

Amazing news...that's an instant buy for me once they have in store pickup.
Reactions: ShaunAFC3
K

So I guess this thread from yesterday was correct.

In any case, this blows the Tegra K-1 in the Nexus 9 out of the water.
Reactions: ShaunAFC3 and Billy95Tech

agsystems said:
Amazing news...that's an instant buy for me once they have in store pickup.
Click to expand...