iPad Mini 6 Rumored to Feature A15 Chip and Smart Connector

The sixth-generation iPad mini will feature an A15 chip and a Smart Connector, according to a report from 9to5Mac. 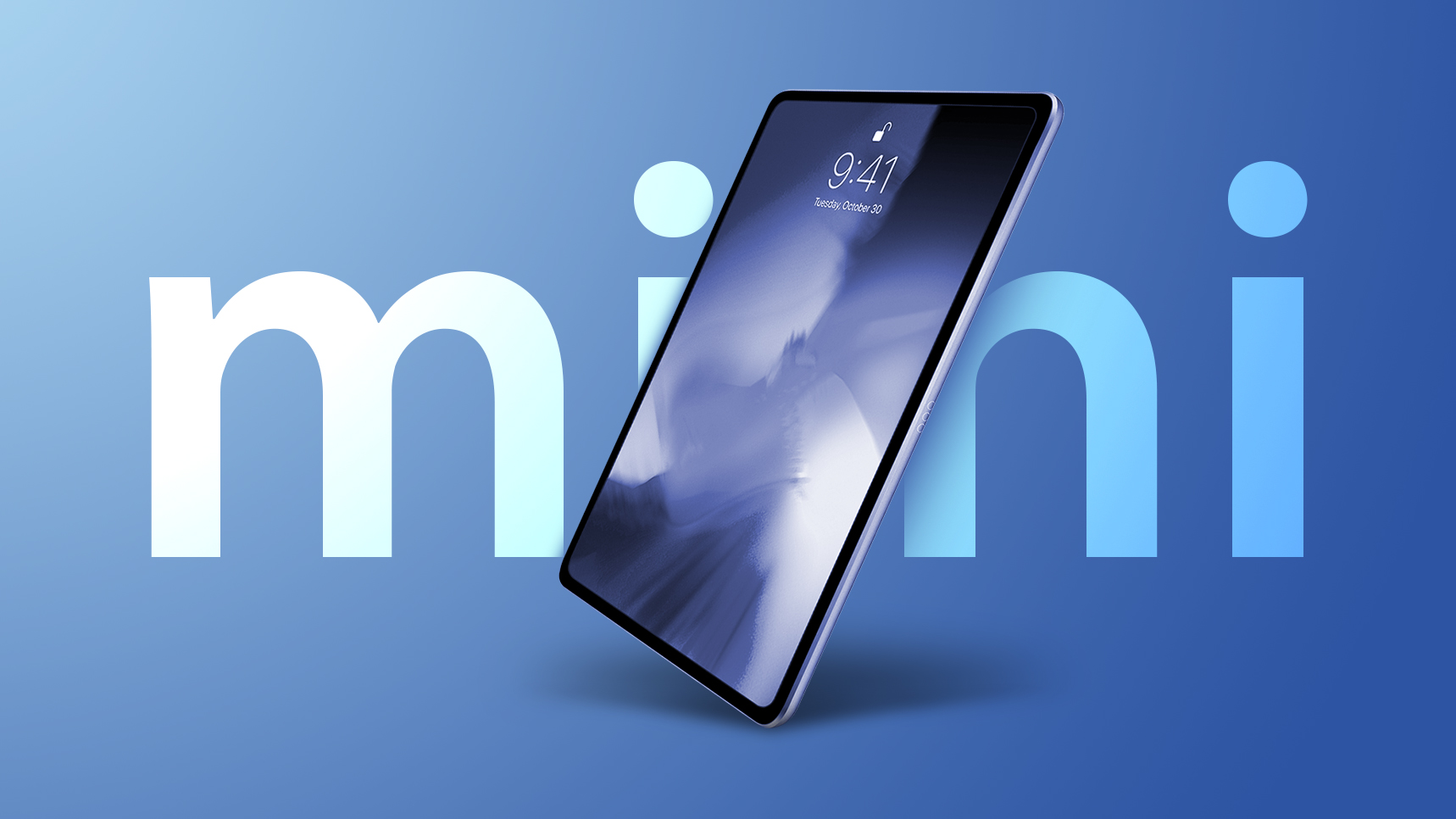 The next-generation iPad mini is reportedly codenamed "J310" and will feature a number of significant upgrades. The report claims that one of the key features of the new iPad mini will be the A15 chip, which is expected to debut in the iPhone 13 lineup later this year. The A15 is expected to be made with the same 5nm fabrication process as the A14 chip, and Apple is said to be working on a more powerful "A15X" variant for other iPad models set to launch at a later date.

As previously reported by the leaker Jon Prosser, the sixth-generation iPad mini will also have a USB-C port instead of the current model's Lightning port to open it up to a wider range of peripherals and accessories, bringing it in line with the iPad Pro and iPad Air.

The other major upgrade claimed to be arriving with the new iPad mini is a Smart Connector, as previously shown on Jon Prosser's renders of the device that were purportedly based on leaked images. The report says that Apple is planning to release Smart Connector accessories for the new iPad mini, but it is not clear what these may be.

Separately, the report also stated that the entry-level iPad, reportedly codenamed "J181," is set to receive an update with the A13 chip from the iPhone 11 lineup. The current model features the A12 chip, meaning that the A13 could give the device a significant performance boost.

Bloomberg's Mark Gurman has said that the new iPad mini is expected to launch this fall, and despite a range of inconsistent rumors around the device, most reports seem to have agreed on the device featuring a larger display in the region of 8.4-inches with slimmer bezels and an iPad Air-style redesign.

This is going to be a banger. I just hope it gets Face ID but it will probably just be a smaller iPad Air.
Reactions: iLLUMI, awsom82, MaximizedAction and 17 others

Wow, an A15 in this thing will be super fast.
Reactions: iLLUMI, SFjohn, ThaRuler and 8 others

A15X? That would be the M2 unless they’re making an ‘in between’ chip just for the iPad Air (or that rumoured folding iPad).
Reactions: apparatchik, peanuts_of_pathos, calstanford and 4 others

This will outsell hotcakes.
Reactions: iLLUMI, PsykX, AMWausau and 10 others
F

6GB of RAM, please.
Reactions: iLLUMI, Stridr69, SFjohn and 8 others

You heard it here first! Bezel-free design that allows multiple mini's to be attached together to make a larger iPad. No issues with folding, no need to choose size at time of purchase! Mini to the MAX!
Reactions: MaximizedAction, polyphenol, cameronp16 and 6 others
M

I wish Apple would make a decision quickly on whether they are converting to USB-C. Although I would hate to see Lightning go, it sucks that half their products are USB-C and half are Lightning.
Reactions: JohnNP, awsom82, IMPOSSIBLEMAN and 13 others

What’s the main point tho, the iPhones are big and the mini is to small for a tablet
Reactions: iLLUMI, ijbond, Damian. and 15 others

Just give it the edge to edge screen, 8" display (Same aspect as the 12.9" iPad), and Apple Pencil gen 2 support. Make the iPad an iPad again...I love my 11" iPad, but having the Smart Keyboard means I always end up using it like a laptop, and pretty much always have the keyboard lying around next to me if I do use it as a tablet.
Reactions: peanuts_of_pathos
B

Maybe for you. For me, a normal person, it’s the perfect size for reading and playing games.
Reactions: iLLUMI, Bobby Smallwood, Scarboose and 27 others
H

Falhófnir said:
A15X? That would be the M2 unless they’re making an ‘in between’ chip just for the iPad Air (or that rumoured folding iPad).
Click to expand...

There’s no room for an in between chip. M1 has the same core configuration as the A12z.

Im guessing this “A15x” is the same as the M2 we’ve heard some about.
Last edited: Jul 20, 2021
Reactions: MhaelK, peanuts_of_pathos and sananda
D

Sooo getting it! Just hope it has Face ID !
Reactions: iLLUMI and peanuts_of_pathos

I love it when people assume that their use case must be the same for everyone!
If you like a big phone and big tablet, more power to you!

I, for one, will jump on this, if it is true.
Reactions: iLLUMI, doctrsnoop, Bobby Smallwood and 15 others

My favorite iPad of all. Day 1 purchase if true.
Reactions: iLLUMI, Scarboose, ijbond and 9 others

Maybe the point should be that there are people out there who buy iPads other than you. The mini has been the best platform for reading IMO. It isn't big and bulky as its more powerful iPad cousins, nor too tiny like its iPhone cousins. It is the "Goldilocks" of iPads for those who love to read books. It is also way more portable for those who like to have an iPad with them but don't won’t to lug around one of the bigger models. It is a niche market, but so are all the iThingies... Long gone are the days when Henry Ford only sold Model Ts and only sold them in black color. People demand and get more options these days, and that is a good thing.
Reactions: Pedster, Bill Poulos, LRB55 and 35 others

The iPad mini is a great device, perfect for reading - gaming and also chilling on the couch.
Reactions: LRB55, iLLUMI, cristianvaldez and 8 others
D

Nautilus007 said:
The iPad mini is a great device, perfect for reading - gaming and also chilling on the couch.
Click to expand...

Perfect for kids too!
Reactions: star-affinity and peanuts_of_pathos

thingstoponder said:
There’s no room for an in between chip. M1 has the same core configure on as the A12z.

Im guessing this “A15x” is the same as the M2 we’ve heard some about.
Click to expand...

The original X chips were just graphics-boosted A chips, so Apple looking into a SKU with more GPU cores isn’t impossible. They already wring more graphics performance out of the A14 in the iPad Air, so this could just formalise the arrangement. The big benefit of doing this would be allowing the iPad Air/ ‘fold’ in on the fun with the sort of games the M1 unlocks, even if the vanilla iPhone chip is constrained by the much lower thermal envelope it has in the phones.
Reactions: ElectronGuru, peanuts_of_pathos and TheYayAreaLiving 🎗

I would place my order today. I love using my Mini 5 but ready for the update. I hope it mirrors my 21 Pro as much as possible but nice smaller size for reading.
Reactions: cristianvaldez, New York, Oohara and 3 others
M

Obviously, the iPad mini will be a complete failure because it'll fail to sell more units than (arbitrary metric here).

Give me a iPad mini Pro, and I'll buy the crap out of that. Form factor is the best for me, but the non-pro features will prevent me from moving to the smaller device.
Reactions: Zammir, HarryWild, SFjohn and 4 others
You must log in or register to reply here.
Share:
Facebook Twitter Reddit Email Share Link
Register on MacRumors! This sidebar will go away, and you'll see fewer ads.
Sign Up
Top Bottom