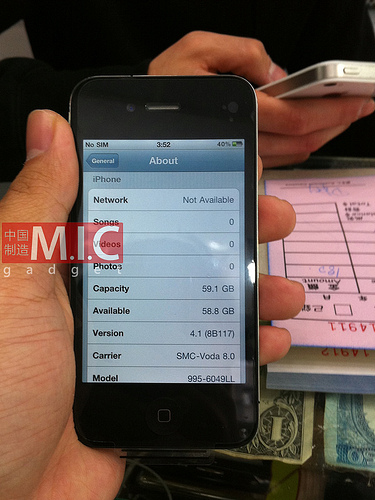 According to 9to5Mac source Mr. X, the upcoming "N94" next generation iPhone is being stocked by Apple in 3 different capacities. The iPhone 4 current comes in only two capacities: 16GB and 32GB. They are interpreting this to mean that the next generation iPhone will come in 16GB, 32GB and 64GB capacities. However, they can't be certain. The three different sizes could conceivably be 8GB, 16GB, and 32GB, or some other combination altogether. All that is known is that the upcoming "N94" model will be available in three different capacities.

However, this isn't the first time we've heard of a 64GB iPhone. In March, a prototype 64GB iPhone model began making the rounds in China.

The owner of this engineered prototype told us that he got it from a source who has a small quantity of these prototypes. They are definitely leaked from Foxconn's factory in Shenzhen. What's more, according to the owner, he believes that the next iPhone will bring 64GB storage capacity to users.
Click to expand...

The circulating model at the time was an iPhone 4 design with 64GB of internal storage, suggesting that Apple had been working on such a model.

Apple will be introducing the next iPhone on October 4th during a media event held on Apple's campus. So far, there has been evidence of a revised iPhone 4 model, rumored to be of 8GB capacity, and this N94 next generation iPhone which will be coming in 3 sizes. The N94 carries the same overall look as the iPhone 4, but is believed to incorporate a much faster processor (A5) and better camera (8 megapixel).

Considering the SSD upgrade costs of MacBooks (especially Pros), I doubt the 64GB iPhone will be cheap...

Excited for the 64gb possibilities!!
S

YAY finally a 64Gb iPhone!!! I have a massive music library would be nice to get it all on
S

If this is true then Apple will for sure be doing one phone that covers both low and high end. No iPhone 4 as a low end model. They will use this one.

By the way, I think that it will be called an iPhone 5 no matter what. I don't think Apple will say "Here is our new A5 chip, new iOS 5, and new 5th generation iPhone called the iPhone 4S."

Doubt 64 would be an option now that cloud will be intro'd.

If the 4S is supposed to be 'lesser' phone to the 5, there is no way it would come in 3 size variants- this is definitely troubling for those of us hoping for a redesigned iPhone 5.

strausd said:
By the way, I think that it will be called an iPhone 5 no matter what. I don't think Apple will say "Here is our new A5 chip, new iOS 5, and new 5th generation iPhone called the iPhone 4S."
Click to expand...

rgarjr. True, I heard they'll be having an iPhone 4s that looks the exact same as the current one but doesn't save stuff to phone memory at all and it will be all on the iCloud, also apparently will be fair cheap
U

YES we all know what this low key means! No iPhone5


whatever, im not mad because they arent releasing an iphone5 this year im mad cuz they released this new phone LATE! and yet have not made any major improvements. If 4G is not available for this iPhone type, i don't know what ill do
R

Either Apple is finding it harder and harder to keep things under wraps these days (and only ONE new iPhone is released), or Apple is a master of deception and we get two.

I'm rooting for the latter.

On a slightly unrelated note, whatever happened to the 3G (cellular) iPod Touch rumors?
B

Hopefully true. I won't be considering the new model if it doesn't have 64GB

One new iPhone. iPhone 4S design model. The cases are a distraction. based on what I've heard.

Then what do you think of the iPhoto icon?

64GB is overdue. We've had a maximum of 32GB for over two years. Obviously the cloud is the future, but it's not there yet (for example, it doesn't address video and iTunes Match is US only).
S

Loge said:
64GB is overdue. We've had a maximum of 32GB for over two years. Obviously the cloud is the future, but it's not there yet (for example, it doesn't address video and iTunes Match is US only).
Click to expand...

iCloud needs to be a streaming service first.
A

Picture of the iPhone above is simply using the jailbreak tweak "fake about screen" which allows you to put in fake values on your about screen: http://www.ijailbreak.com/iphone/cydia-app-fake-about-screen/

Who is doing the distracting? Apple? I don't know why Apple would get consumers hopes up with some radically different design and then disappoint with a 16 month spec bump.
R

One new iPhone. iPhone 4S design model. The cases are a distraction. based on what I've heard.

Arn, to be sure, I wasn't impugning a lack of effort on the part of the rumor sites, just that I'm surprised at the sheer quantity of conflicting/confusing leads. We'll know soon enough.

I just feel bad for those of you charged with writing the rumor roundup piece after Tuesday's announcements.
L

samsandy said:
YAY finally a 64Gb iPhone!!! I have a massive music library would be nice to get it all on
Click to expand...

You don't need a 64GB iPhone to do that with iOS 5 you can get iTunes Match.

I really hope there is an 64BG iPhone I have the 32GB and only have about 500mb left.

Too many pictures, videos and apps.
A

I figured the "1" badge on the invitation suggested just one phone, although I still think they'd call it an iPhone "5" whether it is a "4S" regarding its upgraded internals and supposedly similar design. But why would the cases that support what many seem to want (a tear-drop design, bigger form factor, etc.) be used as a distraction? I'd think that typically, distractions would involve using somewhat "lesser" products (4S) to divert attention away from a superior product (5), not the other way around.

(I'm just speaking based off of what seems to be what many wish for with the bigger screen and tear-drop design, etc. Personally I like the iPhone 4's current design, although I do think a bigger screen would be nice)
X