So I recently got an iPhone 5 on iOS 6.1.4, sadly this iPhone has had a few issues though.

One brand-new dock connector and NOHON battery later, the iPhone 5 is perfect. But let's focus on the NOHON battery now, so I bought it because I saw no reviews on the battery/it seemed to have claims which weren't that unachievable(ahem Gold 4S batteries). It claimed my iPhone 5 would have 1590, a nice little boost from 1440 if true and some room for the battery to degrade while being at its full design capacity still.

Fired up Coconut Battery and to my surprise, it is a real 1590mah battery. 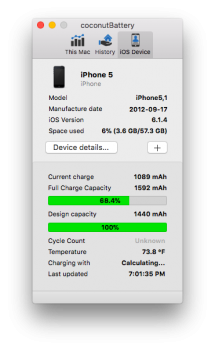 I also use a Cydia tweak to display the iPhone's battery info in the Notification Center which also reported it being 1590mah.

Hope this helps out any users deciding on buying one of these, I'm very happy with the result. I'll try to update this thread on how the performance is a week from now, a few months later ,etc.

It's currently fully charging so when I reach 100% I'll post a full battery shot. 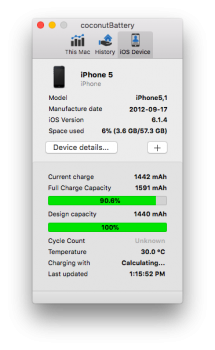 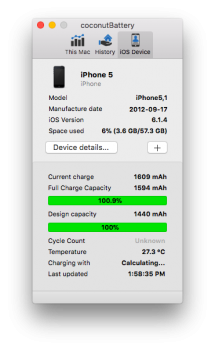 I knew there was larger capacity batteries for iPods, didn’t know they have them for iPhones too. Curious to see how it holds up..
Reactions: iModFrenzy

Give it a week of usage before reporting. The full charge capacity value is set at the factory. Until it's been through a couple of cycles, the true value isn't known.

JPack said:
Give it a week of usage before reporting. The full charge capacity value is set at the factory. Until it's been through a couple of cycles, the true value isn't known.
Click to expand...

Alright will do, thanks for that piece of information!
D

I would love to see some *real* testing on these.

It makes sense that higher capacity options could exist given density improves by a few percent a year.

Hey, how’s it going? So I just bought a 1700mAh Nohon higher capacity battery for my 5s and I’d like to know how’s the battery holding up for you so far? Did the charging capacity decreased? I would really appreciate an update!
Last edited: Jan 17, 2019
You must log in or register to reply here.
Share:
Facebook Twitter Reddit Email Link
Register on MacRumors! This sidebar will go away, and you'll see fewer ads.
Sign Up
Top Bottom