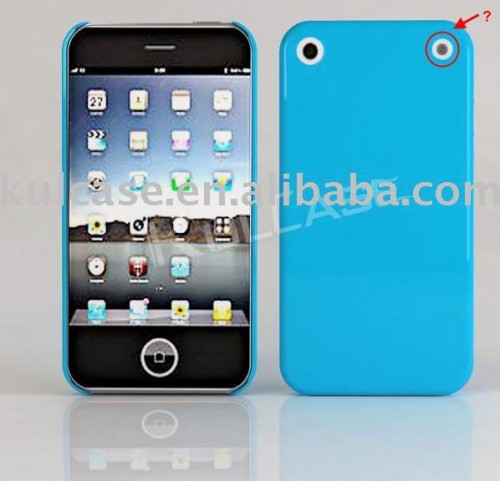 GadgetsDNA points to a new Chinese case design found on Alibaba that claims to be for the "iPhone 5G".

What's unusual about the case is that it seems to depict a very thin-bezel design as well as a distinct camera design. (It should be noted that their iPhone 4 "crystal" designs</a> also have little in the way of bezels") The camera flash appears to be on the opposite side of the case rather than adjacent to the camera itself.

While there's been talk of these more dramatic changes, the most recent reports have claimed that the next iPhone will actually only contain minor cosmetic differences over the iPhone 4.

In fact, the closest rumor that we've seen resembling this design is one from former Engadget editor Joshua Topolsky who claimed that there would be almost no bezel on the new iPhone and that the screen would be enlarged to 3.7 inches. Topolsky, however, had previously incorrectly predicted an SD card slot in the iPad 2 -- a feature that also found its way in early case iPad 2 case designs.

Our best guess at this point is that Topolsky and these case designs share a common source. And while it may represent prototype designs being tested at Foxconn, we believe the very next iPhone will likely share a similar form factor to the present design. It's possible we could see these design elements in the future, as the iPod Touch camera was found in case designs a full release cycle ahead of the ultimate release.

I love the iPhone 4's design so much. Hard to think they can better it!
Comment
Z

This design which makes it look like zero bezel [where the screen is] makes the phone look really ugly and brick-like, in my opinion.
Comment

I swear, if Apple makes the new iPhone have a screen that looks like that, all stretched and too big...
Comment

That case however leaves a lot to be desired. And when I say that, I mean in the chromatic department.
Comment

This made up by someone who doesn't even know why it was called the "3G"..... sigh.
Comment
R

Damn that looks ugly...I don't see what the fascination is with these larger screens...they look so tacky and cheap when they go all the way to the edge.
Comment

When I said the chromatic department, I did mean the color (ie the blue hue you see above).
Comment

Jobsian said:
When I said the chromatic department, I did mean the color (ie the blue hue you see above).
Click to expand...

I think we could have worked that out
Comment

Love the iPad screen on the iPhone. Brilliant. /sarcasm
Comment

Someone in china makes a bad photoshop and poor jpg compression, throws 5G around and it makes front page on macrumors.

To me by the wide spacing of the two this could be a second camera for taking
3D imaging, what do you think.
Comment
C

They make all sorts of crap that very often does not work. It would not be surprising if this was simply some failed idea or bullcrap.
This really does not have anything to back it up.
Comment

lifeinhd said:
I really don't think Apple would shift the screen off-center like that.
Click to expand...

Agreed. Also the white ring around the home button. This mockup (and Topolsky's similar one from last month) are just silly.
Comment

Gemütlichkeit said:
Someone in china makes a bad photoshop and poor jpg compression, throws 5G around and it makes front page on macrumors.

For whatever reason, a lot of the cases you look up from China use a number and "G" (i.e. xG) for Generation, not data speed. For example, a lot of the cheaper Chinese cases for the iPhone 4 are listed as "iPhone 4G". Same with the iPod touches. Current cases are often listed as "iPod touch 4G" compatible.
Comment

The multitouch grip of death

The screen is so close to the edges, it can cause a the dreaded "multitouch of death". Grip the sides too hard, and your fingers appear as touches to the OS.
Comment

iPhone 3D maybe? Probably not. And I kinda hope not.
Comment

The other location is for a 2nd camera, for 3D. The flash/light will be surrounding the lens of each
Comment
W

Look, you guys are the same guys who whined that the iPhone 4 looked like trash when it was leaked. When Steve Jobs comes on stage and gives the run through, there will be love in your eyes.

The edgeless screen will look spectacular since nobody has done one yet. It'll look amazing since it'll be edgeless and very well put together.
Comment
R

wankey said:
Look, you guys are the same guys who whined that the iPhone 4 looked like trash when it was leaked. When Steve Jobs comes on stage and gives the run through, there will be love in your eyes.

The edgeless screen will look spectacular since nobody has done one yet. It'll look amazing since it'll be edgeless and very well put together.
Click to expand...

Not if the resolution changes it wont. Developers will be pissed if they have to have a 4th set of graphics. We already have to have: