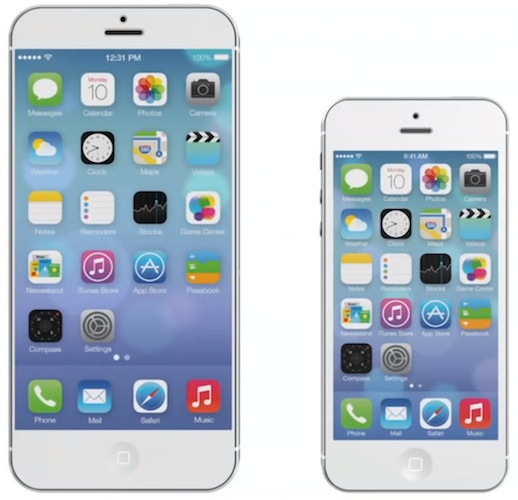 Adding to a litany of analyst predictions pointing to a larger iPhone, Timothy Arcuri of Cowen and Company (via AppleInsider) today claimed that the iPhone 6 will ship with a 4.8-inch display, a significant increase over the 4-inch display of the iPhone 5c and iPhone 5s.

Citing sources within Apple's supply chain, Arcuri also indicated that the next-generation iPhone will come with the 802.11ac Wi-Fi standard that first began appearing in Apple products in 2013. 802.11ac, or "Gigabit" Wi-Fi offers speeds up to three times as fast as existing 802.11n wireless networks, reaching speeds over 1 Gigabit per second.

Because 802.11ac was included in Apple's updated Mac line throughout 2013, many expected the iPhone 5s and the iPhone 5c to ship with the standard. While the chips were presumably not quite ready at the time, 802.11ac support in the Galaxy S4 and the HTC One suggests that the technology is now ready for mobile devices.

Echoing several other predictions about Apple's future in mobile payments, Arcuri went on to suggest that Apple will offer "key software innovations" in 2014 with iBeacon, Touch ID, and Passbook used as a mobile payment solution.

Aside from hardware tweaks and design changes, Arcuri also said that Apple is planning "key software innovations" with the next major release of its iOS platform. He expects the company will leverage iBeacon, Touch ID and Passbook as part of a push into new services with mobile payments.
Click to expand...

According to the analyst, Apple will launch its updated iPhone in September, which is in line with previous Apple iPhone releases. Although Arcuri does not mention dual iPhone sizes, some iPhone 6 rumors have indicated Apple could release the phone in multiple sizes ranging from 4.7 to 5.7 inches.

I would love a bigger screen but with proper aspect ratio. I don't want to see a 7th row of icon.

Seems large, but I'll wait till it comes out until I decide whether or not I like it.

bah, i wanted bigger
B

I'll believe it when I see it. This would be a massive issue for app developers.
T

Thank god, my hands have been growing uncontrollably. It's time for a bigger phone. /s

In all honesty, I'll just try and see how it fits. My wife already complains from the 4s to the 5s that she can't reach the top left corner easily anymore. And that's where a lot of apps' back button is. On Android, with a hardware back button, it makes more sense.
C

Even though some well designed widgets (not that ugly Android stuff) would be great, I'd actually like that blown up interface.

Can't wait to see all the one-handed users bitch and whine lol. Hopefully they release this iPhone in June, and not the fall.

This is good news indeed. I use my iPhone to RDP into my servers and the 4" display just doesn't cut it. Please

4.8 in display will satisfy me.

After using a Galaxy Note or S4 you'll never get back to a smaller screen. It's very comfortable for typing and reading.
D

Jony Ive always proudly stated that the iPhone can be comfortably used with 1 hand. If iPhone 6 still holds true with that philosophy, I'm sold.

I sincerely hope that they have multiple size options rather than just releasing one large iPhone 6. My wife and I were talking about this yesterday. I think her opinion echoes that of a lot of users. They just don't want to haul around a larger device.

I'm going to guess there will be 2 sizes.
B

Another phone, I would never buy. - Spoken like Yoda.

(I would buy this and never any other phone)
T

Please lose the home button or change the shape of it -- whatever it takes to utilize the most real estate without making the phone unnecessarily big.

If they could the form factor anything close to the Moto X, sign me up!!!

nepalisherpa said:
I'm all for a bigger screen but with proper aspect ratio. I don't want to see a 7th row of icon.
Click to expand...

Same here. The "too tall" iPhone is not my idea of a good experience. If they keep a 16:9 aspect ratio, because there is area above and below the screen, the phone is still too tall. I'd settle for 4:3 as to decrease the height of the phone. The larger the screen, you don't need to worry about letterboxing for 16:9 movies, etc. Now, if they could do 16:9 that was all screen, nothing above or below the screen, that would work.
D

It's about damn time. I wish Apple would take more risks instead of playing it safe all the time like they did with screen sizes.

Also to state the obvious they need to shrink the bezel! It's unnecessary to have anything at this point.

bmunge said:
I'll believe it when I see it. This would be a massive issue for app developers.
Click to expand...

It's honestly not that massive of an issue. Developers will spend a little bit more time updating the GUI. I suppose it's different from app to app, like for games, but it's something most developers deal with anyways (i.e. multi-resolution desktop gaming).

Apple needs to fix how universal apps work. When I download a universal app for my iPhone, I get all the graphics needed for it to work on an iPad too. It's double the size it needs to be. Apple needs to check what device it's putting the app on and only serve the package it needs.
C

tonytiger13 said:
Thank god, my hands have been growing uncontrollably. It's time for a bigger phone. /s

In all honesty, I'll just try and see how it fits. My wife already complains from the 4s to the 5s that she can't reach the top left corner easily anymore. And that's where a lot of apps' back button is. On Android, with a hardware back button, it makes more sense.
Click to expand...

That's exactly the reason why Apple silently introduced that swipe-back-gesture some time ago. Believe me, they will certainly justify the bigger screen with software tweaks like that at the coming press event.
R

I wish it would copy the HTC One style (4.7"). I hope Apple doesn't disappoint.

bmunge said:
I'll believe it when I see it. This would be a massive issue for app developers.
Click to expand...

Absolutely all apps would keep using the same dimensions, positions and AutoLayout constraint, except with a 3x multiplier to transform points to pixels.

All developers would have to do to "optimize for iPhone 6" would be to add @3x.png assets to their project, and Xcode would automatically handle the rest.

In the mean time @2x assets displayed on a @3x display would look better than @1x assets looked on the iPhone 4 display when it was released, and we'd have no letterboxing like initially with the iPhone 5.

I don't know what's the likeliness from a economical/manufacturing perspective, but from a developer's perspective that'd be the most elegant way to up the resolution without jumping to the total overkill that is @4x (2272x1280).
You must log in or register to reply here.
Share:
Facebook Twitter Reddit Email Share Link
Register on MacRumors! This sidebar will go away, and you'll see fewer ads.
Sign Up
Top Bottom