Apple is widely rumored to launch a high-end iPhone with an edge-to-edge OLED display this year, which has been variously called the "iPhone 8" or "iPhone X" to commemorate the smartphone's tenth anniversary, and rumors suggest the device will an include iris scanner to authenticate with your eyes. 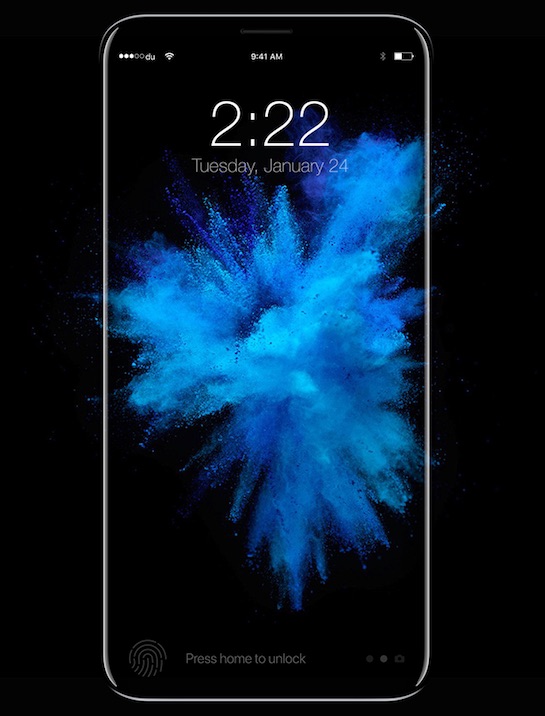 iPhone 8 concept by visual designer Moe Slah​
Taiwanese website DigiTimes, citing unnamed "industry sources," claims the so-called "iPhone 8" will include an OLED display, wireless charging, and iris scanning technology, the latter of which would presumably enable iPhone users to unlock their device or use Apple Pay by authenticating with their eyes.

A person's iris, or the circular colored muscle of the eye, contains a complex and random pattern that is unique to each individual.

DigiTimes has sources within Apple's supply chain, but it has a mixed track record at reporting on Apple's unannounced product plans, so this latest report should be treated with a proverbial grain of salt. The publication previously said iPhones with iris scanning capabilities would not debut until 2018.

DigiTimes previously cited a Chinese website that said 2017 iPhones will include iris scanning capabilities, but today's report is based on its own sources. The original report claimed Taiwan-based supplier Xintec, an affiliate of Apple manufacturer TSMC, would begin mass production of iris-recognition chips this year.

KGI Securities analyst Ming-Chi Kuo, one of the more reliable sources of iPhone rumors, believes Apple is leaning toward facial recognition technology rather than iris recognition, based on the bio-recognition patents it has filed. Way back in March 2016, he said the "iPhone 8" will include either facial or iris recognition.

Kuo said he believes Touch ID will "ultimately be replaced by a facial recognition system" for enhanced security, in line with rumors Apple will remove the Home button; however, if the technical challenges cannot be overcome, he noted a "combination of fingerprint and facial recognition" is another possible solution.

Last month, Cowen and Company analyst Timothy Arcuri said the "iPhone 8" could include facial or gesture recognition technology powered by a laser sensor and an infrared sensor located near the front-facing camera. The feature could allow users to control their devices with simple gestures for tasks such as adjusting volume.

Lending credence to these rumors is Apple's trademark for "Iris Engine" and the acquisitions of companies such as Faceshift and PrimeSense.

iPhone would not be the first smartphone with an iris scanner, as Samsung included the technology on its now-discontinued Galaxy Note7.

DigiTimes also said the "iPhone 8" will enter production earlier than in previous years, in line with a report from earlier this week.

Apple has requested its chip and component suppliers start trial production, inspection and prepare inventories for the new iPhone series earlier than usual, said the sources. Deliveries of chips and parts for the new models are expected to kick off in the second half of first-quarter 2017, the sources indicated.
Click to expand...

Apple's trio of new iPhones, including more iterative "iPhone 7s" and "iPhone 7s Plus" models, are still expected to launch in September per usual. The "iPhone 8" in particular may cost upwards of $1,000 in the U.S. due to its significant redesign and features that require more expensive parts.

Article Link: iPhone 8 Said to Feature Iris Scanner to Authenticate With Your Eyes

why do i feel like this is barely going to work, especially with glasses
Reactions: JamesPDX, Val-kyrie, dannyrodri and 13 others
T

This is so unnecessary
Reactions: Vanilla35, JamesPDX, Galley and 14 others
M

a fingerprint is much more practical unless the iris scanner is some kind of amazing new accurate technology. who wants to bring their phone right up to their eyes?
Reactions: Vanilla35, Val-kyrie, scapegoat81 and 26 others

So we will have the first true EyePhone?

Seems like fingerprint is the way to go in this area, but I can see it being a cool factor for the phone even though I question how well a first gen phone would do at this.
Reactions: Vanilla35, Demo Kit, Val-kyrie and 14 others

Would be coool if it can do some eye exam.
Reactions: businezguy, macs4nw, Cameroncafe10a and 4 others

sputnikv said:
why do i feel like this is barely going to work, especially with glasses
Click to expand...

Microsoft did this already (Iris scanning, wireless charging), and their phone was recently on sale for a 2 for 1, at a $500 price point I do believe.
Reactions: etios and Danilo - Italy

This is always one of those rumors that I hope ends up being false. I think it sounds so hokey and gimmicky to try and pick up the phone straight in front of me and have it try to scan my face or my eyes every time I want to unlock it. Just tapping my finger on the screen is instantly faster and more reliable.
Reactions: Vanilla35, scapegoat81, eduardoregueiracampos and 13 others

I feel like Apple will nail it, just like the fingerprint reader. What's scary is that if the camera can detail your retina, it can pretty much watch you the whole time.
Reactions: S G
J

If alol of these features are true, I can certainly see why the next iPhone will cost upwards of $1000 it will also be worth it if all of this is true. However it could be that some of this technology won't make it into the next iPhone and Apple are just looking these technology's for future devices.

delonholmes said:
When I had my note 7..it did work with glasses...do some research first ..
Click to expand...

You could have just answered the very legitimate question without being childish.
Reactions: Vanilla35, stol, macs4nw and 10 others

Jyby said:
This is just a waste of technical resources.

Apple should go back to the drawing board and make buy worthy computers.
Click to expand...

And Henry Ford should have focused on breeding fast horses.

Computers aren't where the future is for most consumers. Most tech companies are noticing that and switching their resources. Apple putting a huge focus on computers and taking away resources from iPhone and iPad would be a bad move.
Reactions: Kengineer, Macaholic868, Mattlike and 2 others

I sincerely hope burnt retinas are covered by warranty
Reactions: Macaholic868 and Cameroncafe10a

Waste of money, time and resources. By the time I get my phone out of the pocket, it's already unlocked. No need to look at it at all.
Reactions: Vanilla35, marf1million, eduardoregueiracampos and 16 others

sputnikv said:
why do i feel like this is barely going to work, especially with glasses
Click to expand...

If Apple do it, they will make it so that it works properly.

As long as this is optional... This kind of technology is useless for people who have conditions such as keratoconus.

Passwords and TouchID to unlock the iDevice are enough for me. Iris scanning is trying to solve/fix something that isnt broken and hardly necessary or wanted. It'll make for a cool tech demo, but i doubt it will make much of an impact in day-to-day use. Instead of these gimmicks, i wish they would focus resources on revamping iOS from the bottom up.
Last edited: Feb 10, 2017
Reactions: Vanilla35, Gorms, DCIFRTHS and 8 others

GaymerAdam said:
As long as this is optional... This kind of technology is useless for people who have conditions such as keratoconus.
Click to expand...

I have albinism and it comes with nystagmus. Super fun for passports and iphones I hear.
Reactions: SeattleMoose
1

As always Apple following others. I miss the days when Apple used to actually make something different, now it's just the same as the other companies already have for years.
Reactions: EvvieLynn, Demo Kit, tooltalk and 1 other person

apppen1 said:
As always Apple following others. I miss the days when Apple used to actually make something different, now it's just the same as the other companies already have for years.
Click to expand...

Aside from designing the iPhone, Apple has been behind on phone features for years and they have done so on purpose. There is something to be said for being the first to do something, but there is also a lot to be said for taking your time and implementing something the best way possible. Sometimes Apple fails, but sometimes they do it very well.
Reactions: thasan, Icaras, DUIduckSAUCE and 1 other person
A

BenTrovato said:
I feel like Apple will nail it, just like the fingerprint reader. What's scary is that if the camera can detail your retina, it can pretty much watch you the whole time.
Click to expand...

It is an iris scanner, not a retina scanner. It's still highly detailed, but not as highly as you are thinking
Reactions: Icaras, manhattanboy and 69Mustang
You must log in or register to reply here.
Share:
Facebook Twitter Reddit Email Share Link
Register on MacRumors! This sidebar will go away, and you'll see fewer ads.
Sign Up
Top Bottom