Apple currently has more iPhone users in the United States than at any point in history, according to market research firm comScore. 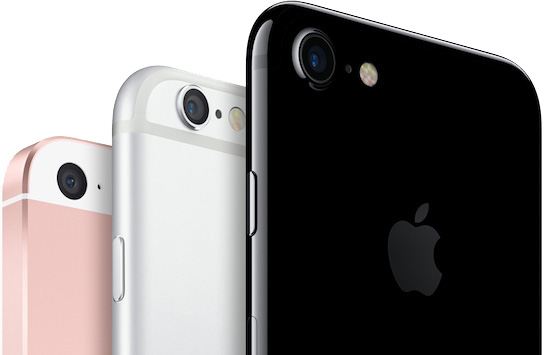 There are now over an estimated 85.8 million iPhone owners aged 13 and older in the United States, based on a three-month average ending December 2016, according to comScore MobiLens Plus. Apple's latest iPhone 7 and iPhone 7 Plus models accounted for approximately 15 percent of that total.

iPhone 6 and iPhone 6s models, including their respective Plus-sized versions, remain Apple's most popular smartphones in the U.S. with an estimated 48.4 percent share of the overall installed base. Meanwhile, an estimated 17.8 percent of the users are still using an iPhone 5, iPhone 5s, or iPhone 5c. 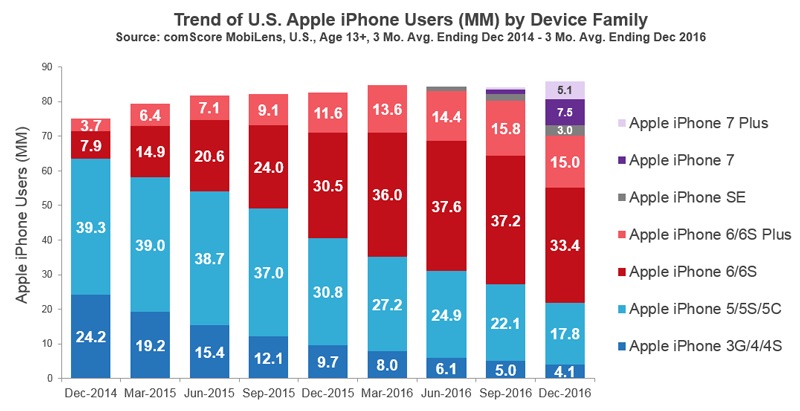 iPhone is the most popular smartphone in both the United States and the world, according to market research firms Kantar Worldpanel and IHS Markit respectively. iOS adoption trails Android in the United States, however, given a wider variety of Android smartphones available to purchase.

iOS adoption among smartphone users aged 13 and older is an estimated 43 percent in the United States, based on a three-month average ending December 2016, according to comScore. The research firm places Android at 54 percent during the same time period, with BlackBerry and Windows 10 Mobile barely registering. 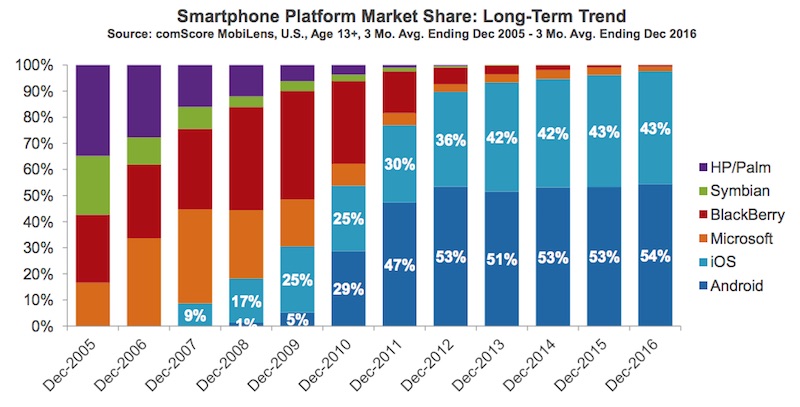 comScore's data differs from Consumer Intelligence Research Partners, which estimated that the iPhone's installed base reached 132 million units in the United States as of December 2016. However, CIRP's data is extrapolated from a survey of 500 Apple customers with no 13-and-over age parameter.

There is a home field advantage for Apple. But by reaching the younger people it does instill some brand loyalty and halo for later products.
Reactions: tridley68

water is wet. Sky is blue.

There are more people now on earth than in anypoint in history.

the world is culmulative. as long as Apple is selling, I expect this number to be raising.

now, if it started dipping, you bet your bottom dollar, we'd have known before know during the earnings calls
Reactions: travelsheep, TechGeek76, tennisproha and 1 other person

I remember walking around the city with my iPhone 4 back in the day, as there was a rarity to owning one & it used to be a big deal. Literally almost everyone I know owns an iPhone in some shape or form today.
Reactions: lionkin, tardegrade, v0lume4 and 3 others
N

Quite astonishing what can happen in 5 years if you don't pay attention and fall behind.
Reactions: lostczech

I think their last few models have been fantastic. Not shocking they keep gaining market share.
Reactions: Keane16, tardegrade, Amacfa and 8 others

There are more people now on earth than in anypoint in history.

the world is culmulative. as long as Apple is selling, I expect this number to be raising.

now, if it started dipping, you bet your bottom dollar, we'd have known before know during the earnings calls
Click to expand...

This is not about sales on earth though, it's about the US only. Many have been saying that the US reached market saturation for smartphones. If that was true, and that Apple's market share didn't go up, then US sales wouldn't be up.

pgiguere1 said:
This is not about sales on earth though, it's about the US only. Many have been saying that the US reached market saturation for smartphones. If that was true, and that Apple's market share didn't go up, then US sales wouldn't be up.
Click to expand...

but even in the US, the population is still increasing overall so, it should still be expected that there is growth possible. (just not necessarily record)

when business analysts and forecasts talk about "saturation", they'r enot saying that sales will stop because everyone everywhere has one.

it's just a state where the market is no longer exploding and the product has reached the maturity state. as long as populations continue to grow, there should still be market growth (as long as the product has moved to product decline, that happens when a product no longer meets any needs, or is replaced by something else)

Smartphones have reached stage III: they're mature and the market growth you see in stage II is done. that's what we mean by "saturated". but as I also said, as long as the population continues to grow, there should be growth in the install base even at this stage, it's just slow growth. (now if US population is actually decreasing, that would be an entirely different story)
Reactions: TechGeek76, FriendlyMackle and Tycho24

NinjaHERO said:
I think their last few models have been fantastic. Not shocking they keep gaining market share.
Click to expand...

Good job Apple. It shows in spite of the naysaying you have identified your customers and they are satisfied.
Reactions: Beck Show, Amacfa, t1meless1nf1n1t and 7 others

Not this user. I'm hoping the new 2017 iPhone isn't just an old iPhone with some glitter on it the way the way the iPhone 7 was.

After owning numerous android phones, my opinion is the iPhone is still the best smartphone around. The best software and best hardware longevity are hard to beat.
Reactions: Soulman, Beck Show, Goatllama and 17 others

This actually agrees more with what I observe than most of these reports. I rarely see android devices used, so either the numbers still are off, android users rarely use their phone in public, or this region is an outlier for iPhones.

I hope that the number grows even more and cannibalises some of the android share.

So Google wakes up and does more for Android (Allo and Duo was a joke). It's good for the competition and my Android Phone will get better
Wish it would be the other way around, but there is not much space to expand for Apple, since there are too many walls and mainstream interfaces getting removed etc.

NinjaHERO said:
I think their last few models have been fantastic. Not shocking they keep gaining market share.
Click to expand...

Any breakdown for Europe? I feel like it is doing horrible here, minus the UK and Scandinavia (yes i know thats not a country) maybe.
F

I think iOS and Apple in general are perceived as being more concerned with privacy. This isn't some trivial issue, privacy is a basic human instinct.

I like seeing charts like these. I find the data quite interesting. One observational note: I can't believe active iPhone 3g/4/4s users outnumber iPhone SE users.
Reactions: Soulman, riomp300 and redscull
E

The reason the market share is high in US is because iPhone is relative cheap for Americans, the dollar is strong and people in US have higher salaries than most other countries.

I wonder how large Apple's market share would be if they had sold the iPhone at production costs. It would have been extremely hard for Samsung and others to enter the market 8 years ago. Apple would be able to push cost lower because of the scale.

Apple could have owned the smart phone market, they could have been as big as Microsoft when it comes to PC. For underdeveloped countries they could sell old models really cheap.

Apple could then have made money from the Apple Store, Apple Music and other Apple products/services in the ecosystem. With a larger market share, Android development would be as attractive as OS/2 or CP/M development.
Reactions: blake2
R

still waiting on Apple's "doom".
Reactions: lkrupp and dBeats
B

This is a bit misleading guys.

The majority of these iphones in the USA are 3+ years old.

That's not a graph apple is proud of.

Why they should push another iOS update to slow our phones down more to force us iPhone 4, 5, & 6 users to upgrade.
Reactions: Jmausmuc, Soulman and Cloudkicker

pgiguere1 said:
This is not about sales on earth though, it's about the US only. Many have been saying that the US reached market saturation for smartphones. If that was true, and that Apple's market share didn't go up, then US sales wouldn't be up.
Click to expand...

It actually means there are more people in the US willing to spend huge amounts of money on a smartphone than any other country in the world.