As it does every year, Flickr today shared its 2017 Year in Review statistics highlighting various aspects of the photo-sharing community with lists including the Top 25 Photos of 2017, Top Devices, and Top Brands. For the Top Brands category, Apple has once again beaten out dedicated camera makers with iPhones being used by 54 percent of photographers uploading photos to Flickr this year, followed by Canon in second place (23 percent) and Nikon in third place (18 percent).

Over the past few years, iPhones have been rising up Flickr's Year in Review rankings. In 2015 iPhones were used for 42 percent of the photos shared to Flickr, and then in 2016 Apple's smartphones retained the top spot again, with 47 percent. Apple first surpassed Nikon to become the second most popular camera brand on Flickr's 2014 rankings. 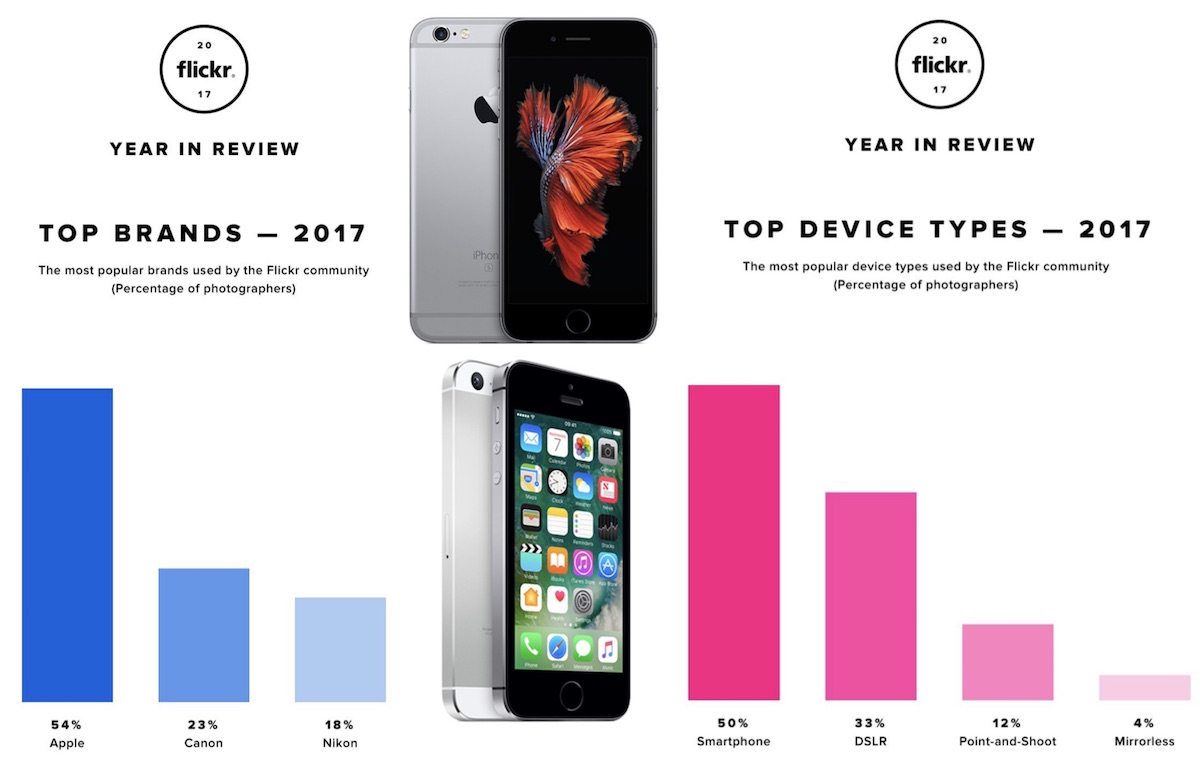 The most popular iPhones used to capture photos shared on Flickr in 2017 were slightly older models: the iPhone 6, iPhone 6s, and iPhone 5s. In total, iPhones accounted for 9 of the Top 10 Devices of 2017, with the Canon 5D Mark III representing the only non-Apple product on the list.

The Top Device Types list has stayed the same over the years, but in 2017 smartphones have grown to account for 50 percent of photos uploaded to Flickr, up from 48 percent last year. DSLR came in second with 33 percent (up from 25 percent last year), followed by point and shoot with 12 percent (down from 21 percent), and then mirrorless at four percent (up from three percent).

Flickr has posted quite a few lists of photos recapping the past year, including the overall Top 25 Photos of 2017, Top Portrait Photography, Top Nature & Wildlife Photography, Top Landscape Photography, and much more. Flickr today also announced new partnerships for its premium Flickr Pro membership, introducing perks from Adobe, Priime, and Portfoliobox into Pro.

Article Link: iPhone Remains Flickr's Most Popular Camera in 2017 Ahead of Canon and Nikon

You're telling me the single most popular phone model on the planet is used the most for shooting pictures?
Reactions: johnnygee, MrkJensen, trainwrecka and 11 others

I just use my iPhone X for photos , got rid of my DSLR camera.
Reactions: ILikeAllOS, Eggtastic, MagMan1979 and 5 others

Android users have too little time left for mundane things like taking pictures after fixing stuff and removing malware.

However, I do use the service as pure and private backup of all my photos.

That’s not hard on Flickr though, right? How many people still use that service? 12?
Reactions: jerryk, Johnny London and Avieshek

I did use Flickr for a while to back up some photos but found it slow, and the interface was clunky. I might take another look at it since I still have an account. But I wouldn't be surprised if the advent of "Pro" means that the free tier eventually will be dumbed down.
Reactions: CarpalMac, BigMcGuire and Avieshek

Not really surprising given the popularity of the iPhone. I went on a trip and used my iPhone and Canon equipment. DSLR got shots iPhone couldn't even begin to capture. While iPhone easily got shots and videos that would not have been as easy in my DSLR. Options are great.
Reactions: spacemnspiff, johnnygee, KAZphoto and 8 others
F

Flickr is actually an amazing website for photos despite the millennials thinking Instagram is da bomb. If you care anything about the quality of photos then Flickr is pretty damn good. You can view/download full size photos from everything up to a 100MP Phase One camera.
Reactions: millerlite, johnnygee, shinji and 13 others

[These are just my personal opinions.]

Selfies and phone cameras are the death of photography as art. And, twitter and blogs (or, even worse, vlogs) portent the death of the written word as craft.
Last edited: Dec 7, 2017
Reactions: spacemnspiff, sofila, SeaFox and 10 others

Of course none of 25 top foto's was made with iPhone. (Yes, I clicked through all of them.)
What value does it have to know that 50% are crap mobile images?
Reactions: CmdrLaForge, gatearray, tooltalk and 1 other person

meaning-matters said:
Of course none of 25 top foto's was made with iPhone. (Yes, I clicked through all of them.)
What value does it have to know that 50% are crap mobile images?
Click to expand...

Now again, this might be Apple's limited 5GB iCloud storage as free for everything vs Google Photos Unlimited Storage the reason for why iPhone users in this age are on Flickr.

fathergll said:
Flickr is actually an amazing website for photos despite the millennials thinking Instagram is da bomb. If you care anything about the quality of photos then Flickr is pretty damn good. You can view/download full size photos from everything up to a 100MP Phase One camera.
Click to expand...

There's Unsplash for that.

meaning-matters said:
Of course none of 25 top foto's was made with iPhone. (Yes, I clicked through all of them.)
What value does it have to know that 50% are crap mobile images?
Click to expand...

Please tell the people at Flickr that they have my close attention once in 10 years
Reactions: Avieshek
R

aking83 said:
I just use my iPhone X for photos , got rid of my DSLR camera.
Click to expand...

tell me about it! The convenience of having a phone always on you is just reason enough.
Reactions: cote32mt and Pufichek

People still use Flickr? That's the real surprise from it. I rarely use my Photobucket account and couldn't use RockYou! once MySpace became irrelevant. I now use Google Photos. Flickr has as much relevance to me as Yahoo!, Glass Door, DxO, and Consumer Report. Nil.
V

TheShadowKnows! said:
[These are just my personal opinions.]

Selfies and phone cameras are the death of photography as art. And, twitter and blogs (or, even worse, vlogs) portent the death of the written word as craft.
Click to expand...

neuropsychguy said:
The best camera is the one with you
Click to expand...

I'd argue against the phrase "Most Popular". It would be more accurate to say "Most Used." I *prefer* the photos I can get from my standalone cameras, but I *use* my iPhone much more often for taking pictures, because I always have it with me.
Reactions: v0lume4

That`s where I am right now. I have Sony RX100M5, which I like - but deciding should I drop it and Iphone SE and go to Iphone X just to have one good enough camera, that`s always with me.

Because my small Sony is way surpasses any cellphone camera, but what`s the point if I forgot it at home?...

Can't tell if joking or if you actually believe that's the reality.
Reactions: sofila, SeaFox, Menneisyys2 and 1 other person

50% of photos on the website come from smartphones while 54% come from Apple branded devices...

That means a minimum of 4% of the pictures come from Apple branded devices which aren't smartphones... so... does that mean that there's an Apple branded Point and Shoot, DSLR, or Mirrorless?

Edit: Multiple people are mentioning the iPad. Which category are you thinking the iPad is going in? Point and Shoot? DSLR? Mirrorless?
Last edited: Dec 8, 2017
Reactions: andreyush
You must log in or register to reply here.
Share:
Facebook Twitter Reddit Email Share Link
Register on MacRumors! This sidebar will go away, and you'll see fewer ads.
Sign Up
Top Bottom