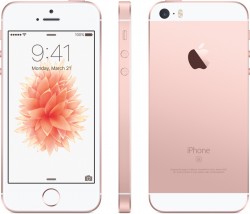 Despite a shift towards smartphones with larger screens, the iPhone SE has topped all other smartphones in the annual American Customer Satisfaction Index (ACSI).

Apple's four-inch smartphone received a customer satisfaction score of 87 out of 100 to finish just ahead of Samsung's 5.7-inch Galaxy S6 edge+ and the 5.5-inch iPhone 7 Plus.

20 other smartphones, mostly including other iPhone and Galaxy models, received customer satisfaction scores of between 70 and 85, according to the ACSI results published today.

"Over the past few years, the general trend for smartphones has been toward larger screens," says ACSI Managing Director David VanAmburg. "But apparently, consumers were craving a new iteration of a smaller, less expensive phone as the iPhone SE - Apple's first update to a 4-inch phone since 2013 - comes in first in ACSI this year."
Click to expand...

ACSI said the results are based on interviews with 36,194 customers in the United States, chosen at random and contacted via email between May 2016 and April 2017. The survey data was inputted into ACSI's so-called "cause-and-effect econometric model," which in turn estimates customer satisfaction. 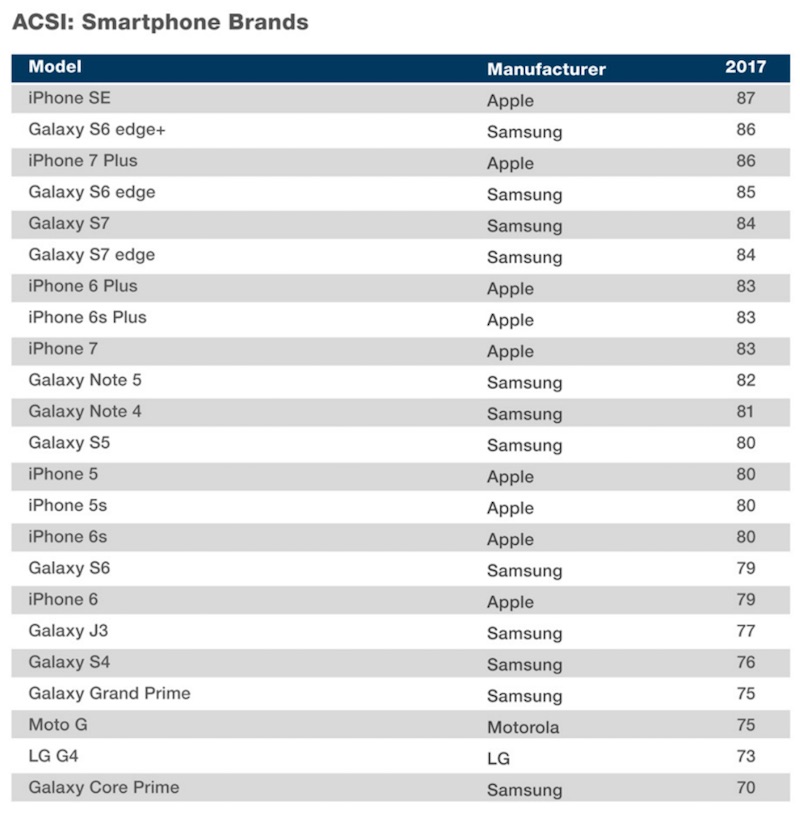 Apple introduced the iPhone SE in March 2016, acknowledging that some people simply love smaller phones, as evidenced by the 30 million 4-inch iPhones that it sold in 2015. The smartphone is essentially an iPhone 5s with newer tech specs, including a twice as fast A9 chip and a 12-megapixel rear camera.

Given its lower $399 starting price, the iPhone SE is also a popular smartphone in more price-sensitive markets such as India.

Apple has yet to release a second-generation iPhone SE, but it doubled the smartphone's previous 16GB and 64GB storage capacities to 32GB and 128GB a few months ago, without raising prices. KGI Securities analyst Ming-Chi Kuo said Apple is unlikely to refresh the iPhone SE in the first half of 2017.

No surprise here to anyone except Apple, who seems to be intensely focused on creating products customers don't want.

I know Steve Jobs liked the quote about skating where the puck will be, but this can be taken too far.
Reactions: ThomasJL, MyopicPaideia, tentales and 23 others
Comment

Well, it's technically an iPhone 6s with a couple older specs, like the fingerprint reader and the front-facing camera, in the body of a 5s (so its screen and battery, naturally).
Reactions: GrumpyMom
Comment

How well Samsung are doing is the bigger surprise to me.
Reactions: Jaro65, Wowereit, bkends35 and 7 others
Comment
0

alvareo said:
Well, it's technically an iPhone 6s with a couple older specs, like the fingerprint reader and the front-facing camera, in the body of a 5s (so its screen and battery, naturally).
Click to expand...

That's a long name for a phone so I'll keep calling mine iPhone SE.
Reactions: pandi.ruvina, rodnaynay, Gameboy70 and 12 others
Comment
B

Headphone jack and reasonable screen size, what's not to love? It's the common sense phone, the last with Steve Jobs fingerprint on it. The 6/7 look like generic Samsung phones.

Yeah I'm a fan. I had a six but missed the one handed glory of my 4s. Got the SE as soon as it dropped and have not regretted going back to small. I have big screens when and where I need them, I don't need one on my person at all times.
Reactions: jakebrosy, MyopicPaideia, tentales and 30 others
Comment

E3BK said:
That's a long name for a phone so I'll keep calling mine iPhone SE.
Click to expand...

ha, that was a reply to "The smartphone is essentially an iPhone 5s with newer tech specs"
Comment
S

I hope the iPhone SE gets updated at least once every two years and Apple doesn't let it die as a one-off.
Reactions: tentales, FrankCostello, thewroots and 22 others
Comment

SE is probably the model of iPhone I'd actually buy because the price is (relatively) reasonable yet the specs are pretty good. Of course, I don't need one and can't afford one but if I had a choice between any iPhone that's available this would be my pick.
Reactions: mattaaron
Comment
M

Ah I'm part of this crowd, love my iPhone SE

The main reason I went to smaller phones was simply because when I'm home, I'm on my iPad/MacBookMacMini, when I'm at work I'm on a MacBook... so it didn't make sense to carry a bulky phone around.

Although I wish the Apple Watch had a SIM so I didn't need to carry my phone around, than I finally have nothing in my pockets (my money is on Apple Pay, my phone is my watch).

Not surprising at all, it really is the most well designed iPhone out there. No nonsense like the 7.
Reactions: FrankCostello, Avenged110, tongxinshe and 10 others
Comment
U

I would imagine the iPhone SE is less profitable for Apple so, despite customer satisfaction, I expect Tim will kill it along with the iPad mini. At this stage Apple's No. 1 goal is shareholder profits. Anything less than obscene profits is fair game for the axe. After all, Apple knows best!
Reactions: aylk, GrumpyMom and usersince86
Comment

I own both an SE and 7plus. Love them both. Both powerful and stylish.

I skipped the iPhone 6 series and thank god I did. The 6 series is as close as Apple should ever get to tacky Android industrial design. And that goes for the gaudy Samsung Galaxy phones that only tasteless tech nerds could like.
Last edited: May 22, 2017
Reactions: mattaaron
Comment

Has less to do with inexpensive and more to do with mobility.
Most people don't want another big clunky thing in their pants.

It's why the iPad mini was the best selling iPad. If you're going to have an iPad, the mini fits in your back pocket, and can be held securely with one hand while out & about. Not because it was cheap. ...which wasn't. If it was cheap people were after they'd have gotten an iPod touch.


And people. Stop saying "industrial design" when not referring to a job title. It's just "design".
Reactions: sracer
Comment

Urban Joe said:
I would imagine the iPhone SE is less profitable for Apple so, despite customer satisfaction, I expect Tim will kill it along with the iPad mini. At this stage Apple's No. 1 goal is shareholder profits. Anything less than obscene profits is fair game for the axe. After all, Apple knows best!
Click to expand...

Wouldn't profits on the SE be even higher? Considering the parts are reused from older iPhones? Doubt there was a massive R&D cost to the SE as well. I'm not much of an iPhone guy myself but I would consider picking an updated SE in the near future as a backup phone.

Still using an iPhone 5, but it's barely holding on. I thought I might eventually move to an SE, but now I'm a bit torn. I got excited by rumors of an all glass iPhone again (the 4 was my favorite), but the so-called 8 looks like it's going to be slightly bigger than the 7s and I really prefer the smaller form factor.

Here's hoping whatever I pick has the longevity that the 5 did. I'm past the need-to-always-have-the-latest phase-- now I'm at the point where changing devices is more of a pain than its worth. The 5 already does everything I need-- calls, texts, email, browser, music... Only giving it up because it's starting to reboot if I try to update more than one or two apps at a time-- think it's a temperature issue...
Comment

It's mostly about the price! (In my opinion.) Big enough, but not too big. Performs well - speed, battery life. But my expectations only have to reach the $350 I paid for a 64 GB model (cyber Monday deal for a new unlocked T-mobile phone) for me to be satisfied. If I spend $1,000 my expectations are that much higher.

Why not keep the SE form factor the same with spec bumps from year old tech and keep price where it is or lower. I bought one, my wife bought one, my mother bought one. Sweet spot for us all.
Reactions: S G, djlythium and turbineseaplane
Comment

ThunderSkunk said:
And people. Stop saying "industrial design" when not referring to a job title. It's just "design".
Click to expand...

Don't correct people when you don't know what you're talking about. "Industrial design" is not just a job title. It's a proper description.
Reactions: 0970373, .max and UL2RA
Comment

The iPhone SE is the favorite because people can still use their Same Earphones without having to spend money to ungrade to bluetooth ones.
Reactions: aylk, saytheenay, JackANSI and 2 others
Comment

Outside of a tiny bug with tapping the back button on the messages app, the iPhone SE is a terrific device. It still has a headphone jack too. Top notch battery life, reliable performance, high end specs? Totally worth the $185 I paid for my 32gb model brand new.
Reactions: aylk
Comment

It's a whole point above 7+

This thread just made me jump back into my gold SE jailbroken,
Reactions: GrumpyMom and Sunny1990
Comment

Hands down my favorite designs with length being the main variable (4, 4s, 5, 5s and SE).

They actually feel like high end hardware and are amazing in hand.