Beats apparently has some new earbuds on the way, as assets bundled in the release candidate version of iOS 15.1 this week revealed upcoming "Beats Fit Pro" wireless earphones that look similar to the recently launched Beats Studio Buds but with wingtips for additional support in the ear. 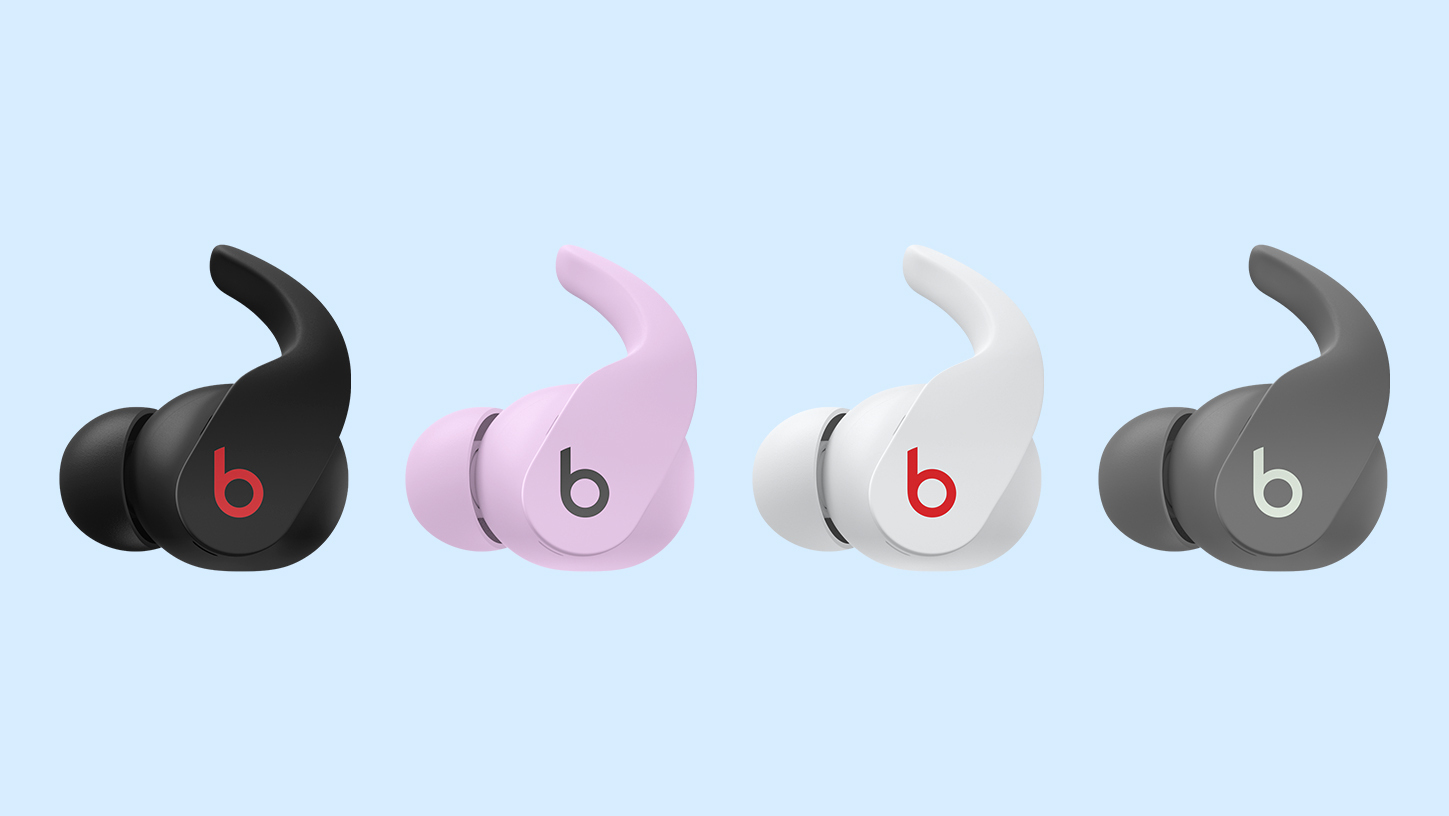 Rumors suggest the Beats Fit Pro should launch around November 1, but at least one celebrity has gotten her hands on them a bit early, as Kim Kardashian was photographed out and about today wearing the purple version of the earbuds, as shared by Just Jared.


http://instagr.am/p/CVRf1TVs0mu/ ​
The photos give us our first real-world look at the Beats Fit Pro as they are worn. As with the Beats Studio Buds released a few months ago, the Beats Fit Pro appear to protrude from the ear a fair amount, so the wingtips should help with comfort by helping to ease pressure on the ear canal.

Beats Fit Pro will reportedly have Active Noise Cancellation (ANC) with Transparency mode, and they appear to have similar Beats "b" logo buttons on the exterior for controls as on the Beats Studio Buds.

Apple's next-generation AirPods Pro are rumored to adopt a stemless design that may resemble the Beats Studio Buds or Beats Fit Pro, but they reportedly won't be launching until sometime next year.

It’s too big for her ear lol
Reactions: FriendlyMackle, SmugMaverick, Benjamin Nabulsi and 4 others

I really don’t think she’s wearing them right. Also, I don’t agree that the Beats Studio Buds protrude that much.
Reactions: Bow Commander, Anson_431 and jordclay

I plan to upgrade to these from the Powerbeats Pro… which are excellent headphones
Reactions: Anson_431, Laces Out, Minato1990 and 2 others

Definitely a controlled leak just like how we saw celebrities wearing Beats Studio Buds before they were announced.
Reactions: TropN, willchris, Anson_431 and 13 others

Who would've thought Kim K would be the newest Apple leaker xD
Reactions: GrumpyMom and 19callum93

Very fitting. This woman made a thriving, multi-multi-million dollar career off of a DVD of her getting exercise... with Ray J.
Reactions: DeepIn2U, Macalicious2011, BugeyeSTI and 14 others

Beats seeds product as a marketing tactic. Seeding to celebrities of all kinds has been in their marketing DNA prior to Apple’s acquisition and continues to be. There’s no story here — it’s not about her vs anyone else. Guarantee half the NBA had these delivered to their addresses in the last 24 hours, etc.
Last edited: Oct 20, 2021
Reactions: FriendlyMackle, CarlJ, Anson_431 and 10 others

XciteMePls said:
Very fitting. This woman made a thriving, multi-multi-million dollar career off of a DVD of her getting exercise... with Ray J.
Click to expand...

Ha! She should be peddling his Raycon earbuds then. ?

XciteMePls said:
Very fitting. This woman made a thriving, multi-multi-million dollar career off of a DVD of her getting exercise... with Ray J.
Click to expand...

And left a sea of teens with body image issues in her wake.
Reactions: Turnpike, The Clark, arkitect and 1 other person

How convenient that her hair is clear out of the way from her ears so that the product can be seen. If she gets paid around a million for a single IG post, I wonder how much she got paid to be photographed out in public wearing these.
Last edited: Oct 21, 2021
Reactions: TropN, hooptyuber, tehBrad and 9 others

She's "influencing", who cares???
Reactions: Turnpike, Glacier1, Kissaragi and 1 other person
U

And MacRumors can't be bothered to mention that how she is using the BEATS FIT PRO EARBUDS (TM) is illegal? At least as far as driving a car is concerned...
Reactions: orbital~debris

So which color should I get so I can look like a talentless narcissistic rich attention…
Reactions: TropN, FriendlyMackle, Turnpike and 10 others

Ha who are you kidding - clearly done to generate interest and buzz.

Could her hair reveal anymore of her ears as well.

Ugh. Out of all people. ☹️
Reactions: TropN, Turnpike, Anson_431 and 6 others

That is news worth reporting!
Reactions: Trolle

Kinda looks like a little seaman in the ear. But pink? Hmm, it’s all good.
Reactions: DeepIn2U and Antes

Kim who? People still care for her?
Reactions: DeepIn2U, Turnpike, decypher44 and 3 others
P

One compelling reason why not to buy this!
Last edited: Oct 21, 2021
Reactions: dazz87, Turnpike, Trolle and 7 others
T

Thanks Apple another reason to buy Bose Headphones instead lol.
Reactions: Turnpike, decypher44, lyngo and 2 others

Hazmat401 said:
I plan to upgrade to these from the Powerbeats Pro… which are excellent headphones
Click to expand...