Reddit has released a new version of Alien Blue this week that gifts pre-existing Pro users with a four-year Reddit Gold subscription for free. The one-time gift can be redeemed through a pop-up menu in Alien Blue version 2.9.10. 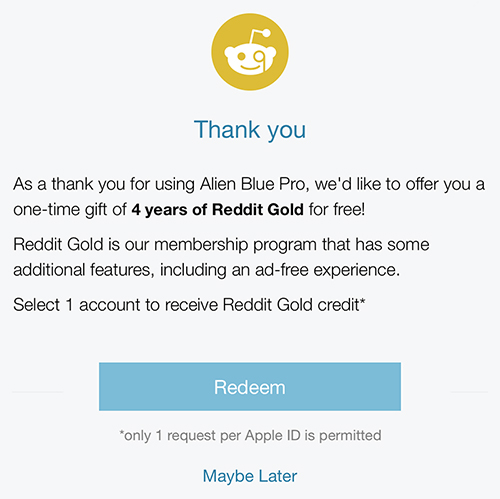 Alien Blue is the most popular Reddit app for iPhone and iPad, developed by Jase Morrissey and acquired by Reddit in October 2014. The universal iOS app is free on the App Store, and a Pro tier was previously offered as a $1.99 in-app purchase.

However, Reddit has since decided to focus its efforts on developing an official Reddit for iOS app, and Alien Blue will be removed from the App Store once the new app is released. Reddit for iOS is currently in closed beta testing.

Alien Blue [Direct Link] remains available for free on the App Store in the short term.

Reddit is a hate site, think twice about supporting them with any money.
Reactions: attila, slu, tonyr6 and 1 other person
Comment

It started as a free for all americana but it evolved into more and more modded version of Facebook. You do realise that the initial reddit was supposed to be the going back to the roots of the internet type of thing where all the information was given and no moderation was supplied and where users decided about the content, not some external entity.
Reactions: aarond12 and patrickcwelsh
Comment
I

Like anything online, reddit has parts of their community that are really great and parts that are really terrible. A lot of it depends on how well a sub is moderated. I only casually browse the site now (mostly on desktop when I want to get into some discussions or learn something), but still appreciate this article about getting a free gold account. I had to redownload the app as I don't browse the site as often anymore, but it worked like a charm once I restored my Pro account that I had from back when it was a paid app. Thanks!
Reactions: caughtinfire, attila, anshuvorty and 2 others
Comment
R

If you've already viewed the message and not redeemed yet, you can choose to redeem your gold membership before 3/31 by scrolling to the top of your feed and just below the search bar there will be a redemption link. Select your account and click 'Redeem"
Reactions: Jemi9OD and iMerik
Comment

That's an interesting statement. My company uses Reddit as a support outlet for its products. Our users love it. Likewise, as a Guildwars 2 gamer there's no better place to go for hints and news about the game as it evolves.

Like the rest of the internet, if there's places you don't want to be don't go there. But there's some valuable information on Reddit.
Reactions: aarond12, Keane16, pcmacgamer and 6 others
Comment

So you admit that you're ignorant, but you continue to stand by your statement. Sounds like a typical Mac user to me!
Reactions: TechGod and pcmacgamer
Comment

gfuexia said:
So you admit that you're ignorant, but you continue to stand by your statement. Sounds like a typical Mac user to me!
Click to expand...

Wow. Harsh, no? I wasn't standing by my statement. I was asking for help from others who knew more. That's why I said I was ignorant. Do you know what that word actually means?
[doublepost=1457724475][/doublepost]

I thought that kind of seedy was Silk Road?

All of our comments discussing this mix up are going to be modded away, aren't they?
Comment
M

There are some great subreddits on that site that are really well moderated, and others not so much. If you filter just the subs that you are interested in and have good communities of people then you will have a fantastic time there. Default subs are usually lower quality because of their default status.
Reactions: aarond12, caughtinfire, Keane16 and 7 others
Comment
B

You also could be thinking about 4chan.
Reactions: naeS1Sean
Comment
Z

hate site? and how is that compare to macrumors
Comment

budselectjr said:
You also could be thinking about 4chan.
Click to expand...

That's what one of the other people said. That's probably the case.
Reactions: budselectjr
Comment

Makes it clear that Reddit is going with a subscription based requirement for their apps in the future. Using the apps will require a gold membership. Those that already own the app will be "grandfathered in", at least for 4 years currently. Those that download the app later will have to pay for a gold subscription to use it or get much of the functionality.

Gotta make money somehow when you're hosting one of the largest sites in the world and not seeing normal advertising work out well for ya.
Reactions: CJM
Comment

I block reddit from my search engines using this script after I searched on so called inocent Google about pregnant cat and the reddit link was loaded with profanity. Reddit is the cesspool of the interent and so is Twitter.
Comment
T

gfuexia said:
So you admit that you're ignorant, but you continue to stand by your statement. Sounds like a typical Mac user to me!
Click to expand...

I guess creating accounts on forums to troll people is the 21st century version of prank calling people you don't like?
Reactions: aarond12
Comment