Leaked Photos of Next Generation iPhone? 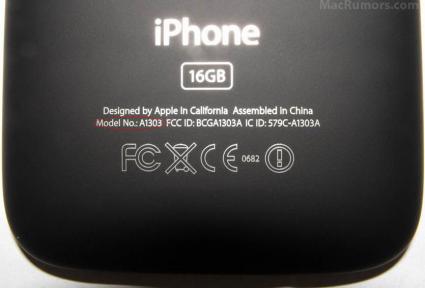 Images claiming to depict the back cover of an upcoming iPhone have started circulating on the internet. iPodObserver first posted a version of the above photo that allegedly depicts an unreleased 16GB iPhone with the model number A1303. This new iPhone case is said to "shed its glossy appearance for a matte black look" and also introduce a new case-back made of metal. The site seems confident in the photo and reminded readers that they were also responsible for publishing an early back-case photo of the iPhone 3G.

MacRumors has also received images that appear to be from the same series. While we can't confirm their authenticity, we present them for discussion given iPodObserver's apparent belief in them. The images have reportedly come from China and are said to depict the back-casing of the next iPhone. The case is also said to be textured for better gripping. 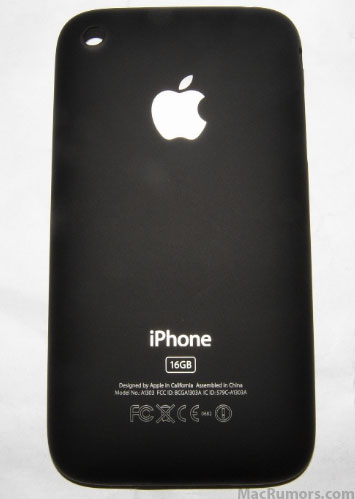 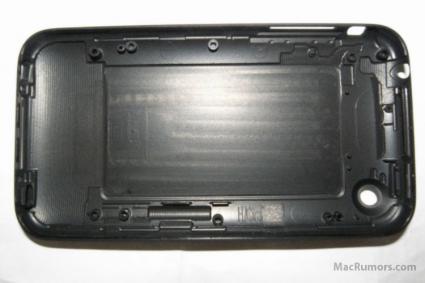 The original iPhone came with aluminum back casing. This design eventually gave way to a smooth plastic curved back of the current iPhone 3G.

My, my! That looks incredible, I'd greatly prefer it versus my glossy back.

Returning to a metal back would be nice, though I seem to recall my original iPhone had a partial black plastic back for the antenna.
T

The matte is SO much better than the glossy. . . . Are we talking about iPhones or MacBook Displays?

looks pretty convincing to me.....but where is there elevator buttons?
L

It better have a lot more to offer than a new back.
C

Yeah baby! The wait is almost over.

Here's to hoping it comes in a CDMA Verizon version

Only about 4 months until we know if it's real or not.

I really like that. Can't believe my baby is going to be considered "old" in a couple of months

And doesn't look like we'll be apple to upgrade cheaply since our 3Gs were subsidized (unlike original iPhone owners.)
S

I think this would have been believable a few months back. This is far too much like the old black macbook. Would it be be totally out of the question that the new iPhone matched in with the rest of the mac/macbook line up? Who knows, they may go back to aluminum for the unibody look.

I don't really see them making the phones have the same finish as an old 13" plastic macbook.
W

I just peed my pants a little bit
S

i just hope the metal back doesnt change the weight that much cuz i LOVED the feel of the iphone 3g...
H

Very interesting. Do I see an indication of a ring around the camera opening which could possibly be for an LED flash, or am I seeing things?

16GB...if true I would imagine a further price drop unless they have something else up their sleeve.
N

That thing is going to be greasy like none other (think black Macbook except worse).
A

Man, it seems like just yesterday that I was huddled outside the AT&T store at 2 a.m., trying to stay warm in the freezing rain, thinking about my upcoming iPhone 3G. Guess I'll be doing it all over in June...

Bringing back the metal!

Im sorry it might just be the "Shiny" Apple "Reality Distortion" but I'd much rather have aluminum backing back! It just has a better feel to it- Heck lets go Uni-Body iPhone 3G, each iphone carved from a brick! p)

Seriously though, I'm hoping for the metal back!

Looks good! Hope it makes waiting to upgrade from my first gen worth it.
T

Garissimo said:
Very interesting. Do I see an indication of a ring around the camera opening which could possibly be for an LED flash, or am I seeing things?
Click to expand...

Maybe the apple logo doubles as an LED flash? One can always dream...
P

MHM !!! hate the glossy back, feels greasy and get many scratches, me would love that iphone !