LG has denied copying the iPhone X's notched design with its latest G7 ThinQ smartphone, unveiled on Wednesday, according to The Korea Herald. 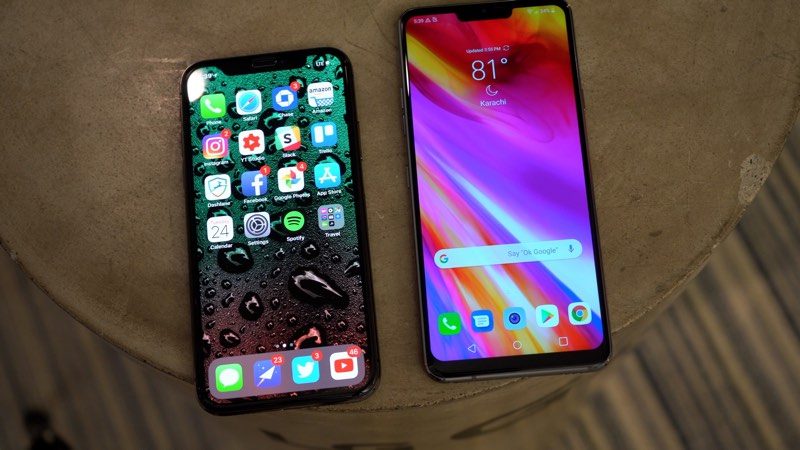 "We planned the notch design before Apple," said Hwang Jeong-hwan, chief of LG's mobile division, in an interview. "The display design may look similar to that of other smartphones, but boasts differentiated features."

LG is one of several Android smartphone makers that have unveiled iPhone X lookalikes in the months following the debut of Apple's flagship handset, alongside the likes of Asus, Huawei, and others. One notable holdout is Samsung, with its latest Galaxy S9 devices retaining uniform top and bottom bezels.


Google introduced support for "the latest edge-to-edge screens" with a "display cutout for camera and speaker" in Android P, the next major version of its mobile operating system that will be seeded to devices like the G7 ThinQ.

Apple has previously said the iPhone X reflects the next decade of smartphones, suggesting the controversial notch will remain for the foreseeable future. However, a questionable report from Korean website ET News recently suggested that Apple may remove the notch from iPhones starting with 2019 models.

How can they deny it. Its right there on the friggen screen. Albeit a bit smaller.
Reactions: Icaras, LandRovers, nastve and 15 others
Comment

Of course they would deny it, they would never directly admit that they are copying Apple blatantly in the notch design. You know...because no other smart phone competitors would mimic The iPhone.
Reactions: LandRovers, ILikeAllOS, ex0dus1985 and 15 others
Comment

Shameless. At least they did it before Samsung though. What's in that notch anyway? The selfie camera?
Reactions: surf2snow1, philosoraptor1, Morgenland and 5 others
Comment

It's funny to me how one of the original positive aspects of the notch was how it stands out and now it's the phones that don't have it that now stand out.
Reactions: surf2snow1, rmoliv, martyjmclean and 3 others
Comment
H

Maybe they did? Did Apple copy Essential? Is this evan an "innovative idea", or natural evolution?
Reactions: skinned66 and flyinmac
Comment
A

In all honesty I wonder what the lead times are on this. I doubt they could have re-worked this in less than a year to match the iPhone X. If you have dealt with HW engineering (I have) then it's just not something you can change quickly. The iPhone X will always look like the pioneer however.

"We planned the notch design before Apple," said Hwang Jeong-hwan

And sure enough, Android folks will buy this, in their processing of mourning that started with “ROTFL” and will end up with ”it’s the obvious design, Apple invented nothing”.
Reactions: surf2snow1, ILikeAllOS, Mescagnus and 13 others
Comment

Doesn’t matter how long ago they planned the design. Whoever had it patented or have the product second would be seen as the one who copied the first one.

Love or hate the notch, there’s a clear reason why Apple put it in.

However if you’ve got a notch on your phone but only 2D facial recognition and still have a bezel on the bottom, you’re probably doing it wrong.

LG boast they “planned the notch first”, yet Apple put the notch in for the purpose of Face ID and it was a necessary compromise to make the technology work. LG have put it in for different reasons. They had it on the drawing board in the rejected pile and it’s now acceptable design as Apple have shipped a phone with it.
Reactions: surf2snow1, ILikeAllOS, Mescagnus and 6 others
Comment
Y

B4U said:
Doesn’t matter how long ago they planned the design. Whoever had it patented or have the product secind would be seen as the one who copied the first one.
Click to expand...

So then Apple, who was the second to have a notch, after Essential.
Comment
1

How could anyone say something so shocking like this? Of course LG didn't copy the "Notch" from the iPhone X, they just added more screen on the sides because they thought about it before than Apple /s
Just like this
https://www.androidauthority.com/notch-apple-huawei-design-858390/
Comment

B4U said:
Doesn’t matter how long ago they planned the design. Whoever had it patented or have the product secind would be seen as the one who copied the first one.
Click to expand...

And sure enough, Android folks will buy this, in their processing of mourning that started with “ROTFL” and will end up with ”it’s the obvious design, Apple invented nothing”.
Click to expand...

At least, both Huawei and LG has way to hide this stupid notch. And according to some forum member, Apple copied essential phone.
[doublepost=1525462975][/doublepost]

Relentless Power said:
Of course they would deny it, they would never directly admit that they are copying Apple blatantly in the notch design. You know...because no other smart phone competitors would mimic The iPhone.
Click to expand...

Recognize or not. Apple has copied lots of features from Android competitor. Suck it up, Apple is also a copycat.
Comment

I really like the LG G7 ThinQ. I may look into getting one in a few months after release if I can find a good deal.

But the truth is, Apple really doesn't have anything to worry about when it comes to LG phones.

Most people don't know about them. Just did a Google search and found a BGR article that 88,000 Essential phones were sold in 2017. According to a MacRumors' article from earlier today, Apple sold over 42 million iPhones during the first quarter of 2018 alone.
Comment

And sure enough, Android folks will buy this, in their processing of mourning that started with “ROTFL” and will end up with ”it’s the obvious design, Apple invented nothing”.
Click to expand...

Not likely. Spend some time in the Android communities and you’ll see the criticisms. There will always be the crazed fanboy and fangirl out of touch with any semblance of reality and objectivity but Apple has its i-Sheep, so it all evens out.

No, a lot of Android enthusiasts think this is an embarrassing and absurd trend. And no, it’s nothing like the little bump on the Essential phone. The notch on an Android phone will be tolerated the same as it is on an iPhone but judging from the many comments and discussions I’ve followed and participated in, it’s not exactly eagerly embraced.
Reactions: timeconsumer and Regime2008
Comment

It’s not the notch that shows they are copycats. It’s the strangely similar wallpaper that says it all.
Comment
C

The appearance of the iPhone notch in the video was not a good example. It appeared uneven left and right. Was that just the background image and lighting causing that illusion?
Comment
J

Just another in a growing lineup of notched phones I’m not buying. If anything, maybe Apple will reconsider their design now that their unique eyesore is no longer unique?
Comment

At this point in the game, I think that arguing over design features (by lawyers and groupies alike) is juvenile and childish. It's like arguing over four wheels on a car, or toilets that flush, or the graphical user interface. People may like or dislike certain features, but the "we did it first" crap falls on a lot of deaf ears. Just give me a machine that works; I could care less about the penis envy between corporate buffoons.
Last edited by a moderator: May 4, 2018
Reactions: kdarling
Comment
C

If it wasn't for LG trying to defend itself in their keynote, and insulting Apple's efforts on stage, I'd have more respect for the company. But like Samsung, they are just childish.
[doublepost=1525465902][/doublepost]

Joe h said:
Just another in a growing lineup of notched phones I’m not buying. If anything, maybe Apple will reconsider their design now that their unique eyesore is no longer unique?
Click to expand...

Apple gives you a choice... use an iPhone 8.

I'm not sure why people are complaining about the notch. It was consumers _demanding_ edge-to-edge screens. Apple delivers, and then consumers complain that they needed to reserve a small space for the camera tech? Makes no sense in my mind. If they dropped the camera tech entirely, could you imagine the outcry then? Just can't please everyone.

It's not an eyesore, but the silly complaining hurts the ears.
Reactions: shamino and BlueParadox
Comment