In a support document, LG has indicated that it plans to add AirPlay 2 and HomeKit support to some of its 2018 smart TVs by October 2020, including LCD models with "SK" or "UK" in the name and OLED models with "B8" through "Z8" in the name. 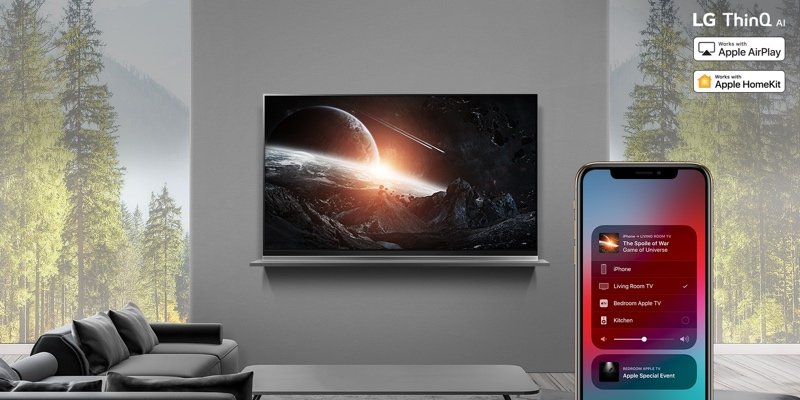 AirPlay 2 and HomeKit will be rolled out with a software update in most countries, with exceptions being China, Iran, Sudan, Syria, and Venezuela.

AirPlay 2 will enable users to stream videos, music, podcasts, and more directly from an iPhone, iPad, or Mac to a compatible LG smart TV, with no Apple TV necessary. And with HomeKit support, users can easily control the TV's power, volume, source, and more using Siri or the Home app on iPhone, iPad, and Mac.

LG initially said that AirPlay 2 and HomeKit would be limited to its 2019 and newer TV models since it could not "guarantee" a "seamless user experience" on older models, resulting in over 20,000 people petitioning the company to reconsider.

About time. My C8 was waiting.
Reactions: Kagio, GarethR, puckhead193 and 4 others

MY B7 is very very sad, but at least, my RaspberryPi 3 with HOOBS managed to get me a proper HomeKit TV integration without any hiccups 🥶 Would appreciate official support but at least I got the option...
Reactions: pollaxe and AccenT

Awesome! I may keep my lovely C8 65 for a while longer, even though I am lusting for the 77 inch CX.

Is there an overview which TV functions one can adjust via Siri?
Reactions: Sandstorm
G

My Apple TV has been chugging along quite fine for years now.

Love Ambilight, but gave up on Philips last year. In December purchased LG C9 and WOW I'm impressed. The display itself is incredible (especially love the 120Hz VRR gaming), but most importantly - the WebOS UI is fast, beautiful and extremely easy to use. The LG Magic Remote is stratospherically better than the utter garbage Apple TV touch remote (I've had every ATV) and, because the C9 was updated with AirPlay 2, HomeKit and Apple TV+ app - I no longer need ANY extra devices and control everything with one awesome remote.

Kudos to LG for updating older devices, but I feel they should do more - definitely some 2017 models could also be updated. But either way - they are totally the leaders in TV field, imho.

Confusing, because I have a B7 with a 2018 date of manufacture. Though this is a refurb model, so I'm thinking the date reflects that process, not the original line-off date. Either way, maybe we see the 7s get something down the road, officially or not.

I looked at LG screens in the store and they were so bad. Such a blurry display and the air gap between front glass and panel is massive causing shadowing round the edges. It seems you have to pay more for the "nanocell" versions to get a panel more comparable to Sony/Samsung budget models that don't have air gaps.

bgalakazam said:
About time. My C8 was waiting.
Click to expand...

Ditto. My C8 will be pleased.

Glad I returned my B7 and got the C8.

We have 3 LG 4K TVs of various vintages. One is way too old to ever support this. One is brand new and already has Airplay 2 (which is great). The third is a 55UK6750PLD. I hope this means it will get Airplay 2 later this year. In the meantime we are finding multiple uses/needs for Airplay to the TVs in lockdown so I've ordered a very inexpensive HDMI Airplay 2 adaptor. We'll see how that works out (badly I expect: if it works at all for the price I'll be happy!)

I visited a Four Seasons in Baltimore two months ago and we were upgraded from the cheap room ($299) to a suite. In the bedroom it had a 65" LG Nano and in the living room it had a 75" LG Nano. I think that only the 01 rooms have this setup. At home I have a 55" LG OLED B8 (the wife set the size limit) in the family room, and four AppleTV's, one of which is used for a guest room and travel. Worked fine in New Zealand. The tuner for ATSC on the OLED is amazing. It identifies two stations on the same channel from different directions. Airplay to the TV means I don't need to use the AppleTV. Looking as to how I can install an LG 48" OLED in the bedroom, without the wife noticing.

Did... hell just freeze over?

Was disappointed initially because I picked up a 2018 before this announcement and I’ll only replace a TV when it’s beyond it’s expiration date. Very exciting!
Reactions: RichardGroves

Hell yeah my B8 and C8 are waiting.
S

I hope they can make a firmware update for existing models to enable this. Or just sell a hardware upgrade kit for that. A TV screen is not something we can just replace because we want a feature upgrade. I think we must do more to decouple the display and the surrounding technology stack.
Reactions: AccenT

LG TV is much better than Samsung TV. All Samsung TV don’t support Dolby Vision 4K. The only thing they can do is HDR10. LG OLED is also a new generation vs Samsung’s old tech QLED (fake, LCD TV).
T

As much as I hate Samsung... I bought 2 TVs from them to use as computer displays at home and in the office (40" and 43").
The quality control was excellent, no issue whatsoever. Unlike my actual TV, which is a Sony that had cost 3x as much when it launched in 2013... which I had to send back THREE times, due to dead pixels all over.

You have to give credit, where credit is due.
S

Hello Sony...wake up and do the same.
Reactions: abbstrack and Jammer005

It seems odd that Disney+ is able to support my C7V, but not AppleTV+. I don't care about AirPlay 2 support, but there's really no reason at all why AppleTV+ can't be added to older sets.

As Disney+ is there, I suspect the fault may be Apple's and not LG's?
Reactions: DCstewieG and AccenT
W

originalmagneto said:
MY B7 is very very sad, but at least, my RaspberryPi 3 with HOOBS managed to get me a proper HomeKit TV integration without any hiccups 🥶 Would appreciate official support but at least I got the option...
Click to expand...