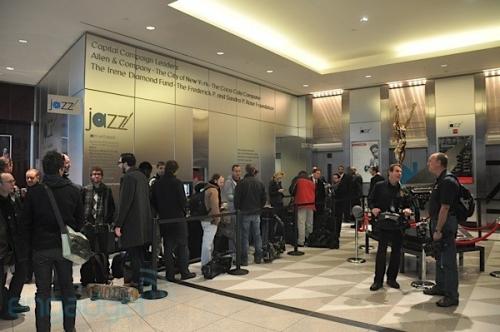 Verizon today is holding a media event where it is widely expected to announce that it will begin offering the iPhone, marking the end of AT&T's exclusive distribution for the device in the United States.

The event is scheduled to kick off at Lincoln Center in New York City at 11:00 AM Eastern Time, or a little under 30 minutes from now. Verizon does not appear to be providing live video or audio coverage of the event, and thus observers will have to rely primarily on text and photo updates coming out of the event.

We'll also be providing event updates here in this article.

- The Daily Show's John Oliver is on hand, with cameraman apparently in tow.
- Media has been admitted to the venue and attendees are getting seated. Venue has a small stage with a screen showing Verizon's logo and the company's "Rule The Air" marketing logo.
- We're getting underway. Verizon's Lowell McAdam is on-stage.
- Setting context with CES and the convergence of data, broadband, and video. "Today two innovators are coming together."
- Talking about FiOS, new 4G LTE network rolling out. "We debated calling this 6G" - responding to other carriers such as AT&T rebranding their HSPA+ service as "4G".
- "Today we're partnering with a giant of the industry, and that's Apple."
- Started talking about bringing the iPhone to a CDMA network in 2008. Tested for a year.
- Today announcing that the iPhone 4 will be available on Verizon early next month.
- Thanking Apple's senior team...pleasure working together.
- Apple COO Tim Cook on-stage. Highlighting success of iPhone, very excited to bring it to Verizon. 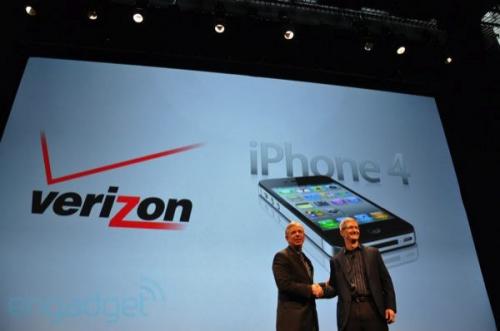 - Has all the features you expect: FaceTime, Retina display, 5-megapixel camera with HD video, custom A4 chip, etc.
- Verizon's Dan Mead on stage to talk about launch details.
- Verizon employees getting the iPhone this week. Ramping unprecedented supply in inventory system.
- Talking about network preparations...have been building in capacity to handle the coming surge.
- Current Verizon customers can pre-order beginning February 3rd. Available to all at Verizon and Apple stores on February 10th.
- Pricing is $199 for 16 GB, $299 for 32 GB. Can also act as Wi-Fi hotspot for up to five devices.
- End of presentation. Cook and Mead now taking questions.

Q: How many do you plan to make in the first quarter or year?
A: Cook: I'm not going to get into our forecast. But it's a tremendous opportunity.

Q: Will it be on a yearly refresh cycle?
A: Cook: No comment.

Q: Is the CDMA version exclusive to Verizon?
A: Cook: It's a multi-year deal, but non-exclusive.

Q: Did you change the antenna?
A: Cook: We've optimized things to work on CDMA, but I'm not commenting on anything beyond that.

Q: Simultaneous voice and data?
A: Mead: "It's consistent with other CDMA devices now", meaning no.

Q: Any new capabilities compared to GSM version?
A: Hotspot is new.

Q: When will we see LTE version?
A: No comment.

Q: Coming to indirect sales channels?
A: Yes, but not at first...Verizon and Apple only at first.

Q: More questions about lack of simultaneous voice and data and whether that will be disappointment for users.
A: Cook: It's all about getting it on Verizon. The customers who want it there will be willing to make the trade-off.

- End of event. Demo units provided for attendees to test out.

No video feed!
I

I guess we are becoming spoiled with those great video feeds...

Worst possible news for Google and Eric T. Mole (if there will indeed be a Verizon iPhone announcement.)

It seems odd that it's been 4 years since the iphone was announced and only now is there a second carrier in the US for the phone.
A

Would we be able to pre-order today as well?

Amazing to see the attention anything Apple- (even assumed Apple-) related gets. We're told that mindshare has moved to Android, but I don't see the excitement in the media for any new Android model being released. Maybe it's because there are so many Android models, and that market share is being boosted by hundreds of Asian Android smart phone models flooding that part of the world, so it's no big deal when a new Android unit gets announced. It's just part of the swarm.

I hadn't heard anything about that...

You can probably watch LIVE Broadcast Coverage at http://live.twit.tv.

Leo LaPorte is pretty good about casting live video coverage on these announcements when the company doesn't.

EDIT: In fact, they have a schedule slot for the event in their calendar. So yes, Video Coverage is there.

Booo... Why are Verizon rumors the front page of a MAC website????

beat me to it lol

*LTD* said:
Worst possible news for Google and Eric T. Mole (if there will indeed be a Verizon iPhone announcement.)
Click to expand...

Actually even worse news for AT&T. They bet their whole operation on being the exclusive provider of the iPhone and that goes away today. The rest of their smartphone offering is pretty weak. They will bleed customers left and right with nothing else to offer except the same iPhone as Verizon on a much weaker network.

mr.steevo said:
It seems odd that it's been 4 years since the iphone was announced and only now is there a second carrier in the US for the phone.
Click to expand...

Unfortunately, that seems due to the monopoly practiced by US carriers. In Europe, I think it's all but illegal.

it's a good day to be snowed in, and work is cancelled!
T

This is beneficial for customers that are sticking to AT&T too! It will turn android growth in the opposite direction, forcing developers to keep the majority of their attention on iOS. And... It will take a load off of AT&T, allowing more reliable data speeds and voice coverage. Can't wait.
T

mrblack927 said:
Booo... Why are Verizon rumors the front page of a MAC website????

Can't wait until this is over and MR stops making a new Verizon post for every step of this process.
3

It would be really funny if this event had noting to do with the iPhone. It almost certainly is because the main stream press seem to think so and I doubt Bloomberg and co publish reports based on wild speculation.

Harry McCracken of technologizer.com will be there as well.

Been looking forward to this all day.
Another day's work behind me which leaves time for a nice cup of tea before the news rolls in.

Today has to be the day, it just has to!

Being in the UK, I'm somewhat indifferent about this event, however, I do think it would be hilarious if it was nothing to do with iPhone coming to Verizon!
M

DakotaGuy said:
Actually even worse news for AT&T. They bet their whole operation on being the exclusive provider of the iPhone and that goes away today. The rest of their smartphone offering is pretty weak. They will bleed customers left and right with nothing else to offer except the same iPhone as Verizon on a much weaker network.
Click to expand...

People keep saying this, but I don't think it's as universal as you think. IMHO, VZW is horrible. I never had good service with them, their CS was bad, and they did all sorts of dirty tricks to cripple their phones. The only way I would switch away from AT&T at this point is if VZW could soundly beat my current rate (which BTW is already a super discounted family plan, so unlikely).

Remember that AT&T came out awhile back and said that most of their customers are on some sort of discounted plan. VZW will have to beat those plans and not the listed plans in order to move a significant amount of people.