Long Lines Persist for iPhone 4, Second Round of Pre-Orders Shipping 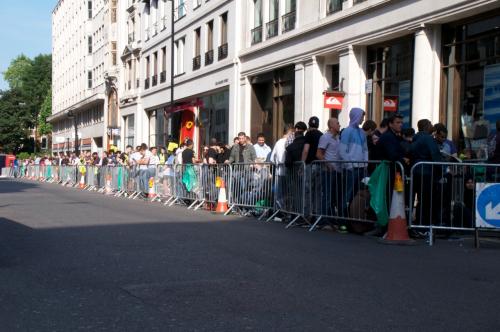 Friday morning at Regent Street, London. Photo by Rob Smith
Long lines persist for the iPhone 4 a full day after its official launch day. The photo above was taken at the Regent Street Apple Store in London this morning.

Meanwhile, we've heard that the second round of iPhone pre-orders have begun shipping ahead of schedule. Customers who ordered the iPhone 4 from Apple after the initial batch sold out were originally quoted a July 2nd ship date, but some of those customers have now started receiving shipping notifications.

The continued strong demand bolsters analysts' recent estimates of blockbuster opening weekend sales. Piper Jaffray's Gene Munster estimated yesterday that Apple will move 1.0-1.5 million iPhone over the first three days of availability. Oppenheimer's Yair Reiner followed up with a more bullish claim of as many as 1.5 million iPhones sold on the first day alone, presumably including those that shipped to customers a day or two early.

Apple reported after last year's launch weekend for the iPhone 3GS that it had sold "over one million" units in the first three days of availability. Given claims of substantially increased pre-order increase over last year and reports of Apple's longest lines ever for launch day sales, it certainly seems likely that the company will eclipse last year's performance.

Hopefully, that's not the queue of people returning the iPhone 4 they bought yesterday (or to buy bumper cases!)
Comment

I am still waiting for my 32GB one that I pre-ordered from the AT&T store =( no news on when it will get here.
Comment
I

lines like this will last for a number of days. When i got a 3GS last year 2 weeks after it came out I had to wait in line.
Comment
P

Will individual Apple stores be indicating whether or not they have stock on their websites like they did last year?

I'd love to go out and get one after work today but don't want to drive that far just to find they don't have any stock.
Comment
Y

A bunch of idiots waiting in line for a defective product...
Comment

That picture is actually taken from around the corner from the Apple Store. I was there just a week ago in one of those buildings for a meeting. I guess that makes the line about 4-500 feet long.
Comment

It'd be nice if you could still get in the store to buy other things while this mess is going on. I was told last night (8:00pm) that I would not be able to enter the store, unless I wait inline, and purchase an iPhone 4.
Comment

I know of all the ordering problems on the 15th and I was very fortunate to get my order in successfully (and very flukey) early. But if I hadn't, well...there's no way in h-e-l-lllll I am standing in lines that long for anything.
Comment

Not a single issue with mine, love it! The Grove store in LA stayed open past 10 last night as there was still a long line!
Comment

Jeremy1026 said:
It'd be nice if you could still get in the store to buy other things while this mess is going on. I was told last night (8:00pm) that I would not be able to enter the store, unless I wait inline, and purchase an iPhone 4.
Click to expand...

I think it depends on the store. Others have let people in. For the next launch, Apple needs to come up with a comprehensive set of rules for stores to follow. They can't have every store doing something different.
Comment
L

Hopefully Apple is also shipping phones to AT&T for those of us who are still waiting for our pre-ordered 32GB phones. It seems like a random assortment of people with certain order numbers haven't gotten any news or shipping notification on their phones.
Comment
S

Jeremy1026 said:
It'd be nice if you could still get in the store to buy other things while this mess is going on. I was told last night (8:00pm) that I would not be able to enter the store, unless I wait inline, and purchase an iPhone 4.
Click to expand...

How the F@&K are they shipping the July 2 shipments when they haven't fulfilled the orders for those of us who ordered on the 15th? This is BS.
Comment
S

It is nice to know that Apple can ship out its second set of pre-orders before AT&T can even bother to fulfill its first set...
Comment
M

This is not what I wanted to hear, I waited in line for 4 hours yesterday to be told they had run out of stock of 32gb although I was far enough along to get a 16gb but declined.

Im hoping to get my hands on one in Cardiff tomorrow in an o2 store, they have an online checker and are occasionally showing stock. As I write this im upgrading my 3G to iOS4, sad times!

Rafterman said:
I think it depends on the store. Others have let people in. For the next launch, Apple needs to come up with a comprehensive set of rules for stores to follow. They can't have every store doing something different.
Click to expand...

Yeah, the Regent Street store in the picture seems to be handling it well. I was able to go back twice yesterday, once to get a micro-SIM and again to get a bumper, no queuing needed.

(And no, my signal is just fine, but I got a bit precious about the shiny glass edges. I've since taken it off though, looks too nice naked )
Comment
C

sennejm said:
It is nice to know that Apple can ship out its second set of pre-orders before AT&T can even bother to fulfill its first set...
Click to expand...

I feel the same way in Canada. Everyone needs a shot at an i4, why not ship a few to Canada
Comment
S

yg17 said:
A bunch of idiots waiting in line for a defective product...
Click to expand...

Defective what now? Where are you getting that BS? That it drops signal like every other phone when the antena is blocked by the hand in a certain way of holding it? Or the handful of yellow spots on the screens caused by the still drying bonding agent?
Comment
A

don't people work for a living? personally I have better things to do than wait in long lines to buy a gadget.
Comment

Can I buy a case today?

Got my phone delivered yesterday. So far, no reception issues, despite my attempts to recreate the problem. (Knock on wood.)

When the 3GS was released last year, I tried to go to the Apple Store on the afternoon of launch day. I actually went to buy something other than a new phone and they wouldn't let me in. Do you think that policy still stands today since there are still long lines? I'd like to get a case but don't want to make the trip if I'm not going to be able to get in.
Comment

That picture does not do that queue justice. I was in that queue for 6-7 hours yesterday, I just made it in before closing at 10 and there were hundreds of people behind me who were turned away.
Comment
A

Apple should first launch it to the countries that are still waiting for the new iPhone, and only then ship second batch to USA..
Comment
B

I pre-orderd on second day of pre-order and got a ship date of jul14th. I was hoping this date would move up after reading this article. Anyways, don't know how all these people have time to wait in line. I find it much easier to order online, save a lot of grief and time. The only time I waited on line was for the 3g, when apple was not selling it online during launch time. Even then I waited 1 week, and the lines were a lot shorter.
Comment
O

I have to wonder about anyone who will stand in a line like this to get a product, any product. I remember the people waiting in line at midnight to get Windows 95; what an awesome product that was (LOL!). They act like it's going to be a turning point in their lives or something. "I used to be a complete failure, but now I have [Windows 95, iPhone, etc.]!"
Are they still clapping as people buy them?
Comment
You must log in or register to reply here.
Share:
Facebook Twitter Reddit Email Share Link
Register on MacRumors! This sidebar will go away, and you'll see fewer ads.
Sign Up
Top Bottom