Mac Shipments Up in Q3 2020 Amid Worldwide PC Market Growth

Gartner's Preliminary Worldwide PC Vendor Unit Shipment Estimates for 3Q20 (Thousands of Units)​
Apple shipped an estimated 5.5 million Macs during the quarter, up 7.3 percent from the 5.1 million that it shipped in the third quarter of 2019. Apple's marketshare grew from 7.5 percent to 7.7 percent, and while it fared well, some PC manufacturers saw even higher shipment growth.

Lenovo, the number one worldwide PC vendor, shipped an estimated 18 million PCs, up from 16.9 million in the year-ago quarter for 8.3 percent growth. HP's shipments were up slightly with 15.5 million PCs shipped, while Dell saw a slight decline, shipping 10.8 million PCs compared to 11.3 million in the third quarter of 2019. 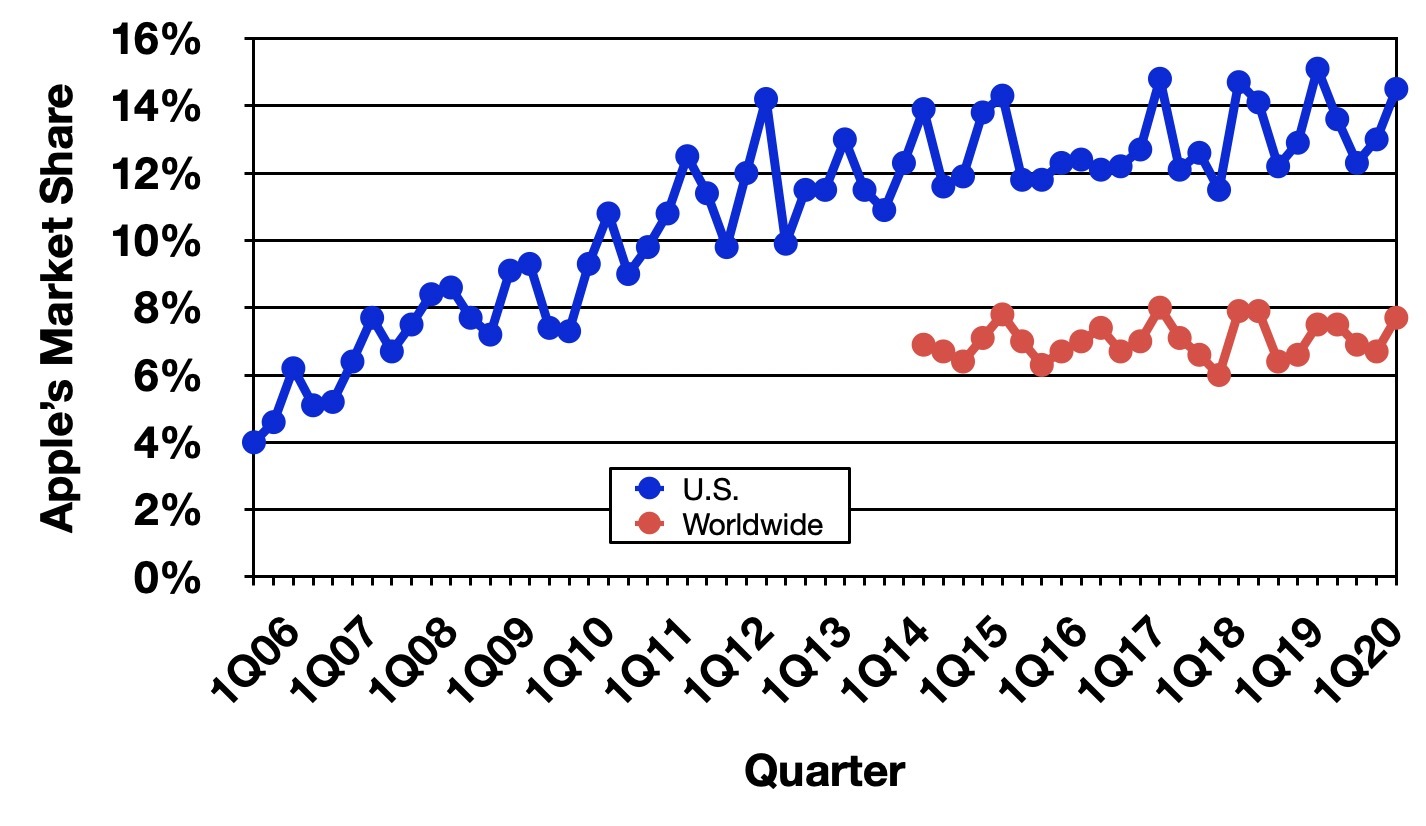 Apple's Market Share Trend: 1Q06-3Q20 (Gartner)​
PC shipments were up this year due to the ongoing global health crisis, which has resulted in people working and learning from home.

"This quarter had the strongest consumer PC demand that Gartner has seen in five years," said Mikako Kitagawa, research director at Gartner. "The market is no longer being measured in the number of PCs per household; rather, the dynamics have shifted to account for one PC per person. While PC supply chain disruptions tied to the COVID-19 pandemic have been largely resolved, this quarter saw shortages of key components, such as panels, as a result of this high consumer demand.
Click to expand...

Apple saw similar growth in the United States, shipping an estimated 2.4 million Macs in the U.S., up seven percent from the 2.3 million that it shipped in Q3 2019. Apple was also the number four vendor in the United States, trailing after HP, Dell, and Lenovo. All PC vendors in the U.S. saw growth, and the U.S. PC market was up 11.4 percent compared to the year-ago quarter, marking the most significant U.S. PC shipment growth in 10 years.

Gartner's Preliminary U.S. PC Vendor Unit Shipment Estimates for 3Q20 (Thousands of Units)​
IDC also released its own shipment estimates this afternoon, which are wildly different from Gartner's when it comes to Apple's sales. According to IDC, Apple shipped an estimated 6.9 million Macs, up 38.9 percent from the 5 million shipped in the third quarter of 2019.

IDC also positions Apple as the number four worldwide vendor, trailing Lenovo, HP, and Dell. Gartner and IDC have different metrics for their measurements, which perhaps explains some of the discrepancy in numbers. Gartner counts desk-based PCs, notebook PCs, and ultramobile premiums, but not Chromebooks or iPads.

The numbers from IDC include desktops, notebooks, and workstations, but not tablets or x86 servers. IDC and Gartner's data is based on estimates, and because Apple no longer provides specific breakdowns of Mac sales, it is difficult to confirm exact numbers.

Apple may see a surge in Mac sales in the coming months as it prepares to transition its entire Mac lineup from Intel's chips to its Arm-based Apple Silicon chips. The first Macs with Apple Silicon chips are expected to arrive before the end of the year.

I bought the new 13 inch MacBook Pro in May and it works great!

I think Mac shipments are going to continue to rise as more people are working and studying from home nowadays. I’m looking forward to Apple reporting their quarterly results at the end of this month
Reactions: BigMcGuire, DelayedGratificationGene, DocMultimedia and 1 other person

I wonder how much custom PCs would factor into this chart? Or do they even measure that?
Reactions: Agit21 and xnu

Get your last Intel Macs now! The transition has begun.
Reactions: VictoryHighway, Freeangel1, GeoStructural and 1 other person

MacRumors said:
Lenovo, the number one worldwide PC vendor, shipped an estimated 18 million Macs, up from 16.9 million
Click to expand...

Might need to fix that typo
Reactions: strawbale, brucemr, kazmac and 4 others

Dekema2 said:
I wonder how much custom PCs would factor into this chart? Or do they even measure that?
Click to expand...

I would think the number is statistically insignificant. If it's counted at all, I'd think it would fall into the Other category.
Reactions: KeithBN, Oblivious.Robot, Dekema2 and 2 others

Damn, what changed with Acer?! They're on fire this year!

Despite Apple’s recent software mishaps (Catalina has been a pain, the last .1 update and the new Safari to name a few), Macs are still the best personal computers out there, hopefully the silicon transition is a success I dont want to have to use Windows ever again haha
Reactions: sideshowuniqueuser, DelayedGratificationGene and xnu

It's amazing to me that Apple is in fourth place after shipping five and a half MILLION computers. I can't even fathom that number. And they do this quarter after quarter. The amount is just staggering (as is the greater number of PCs that wind up in landfills after a couple years).
Reactions: DelayedGratificationGene

Wait until Arm Macs, especially if they are faster and cheaper.
Reactions: DelayedGratificationGene

where are the categories in this...?
this numbers saying nothing, pointless data
Last edited: Oct 13, 2020
Reactions: tmaxxtigger
L

Lenovos are very cool... they had to release a titanium X1 right after I got mine

It's fixed, thanks.
Reactions: LeadingHeat
T

Analog Kid said:
Damn, what changed with Acer?! They're on fire this year!
Click to expand...

working and studying from home due to the virus caused a massive surge in value laptop sales. You dont need a $2k macbook pro to run Gsuite or MS teams.

Also as with ASUS they was the first to widely adopt the superior AMD mobile Ryzen chips in their laptops which would also cause a sales boost , I wouldn't be surprised if that was the reason for intel friendly dells deline in sales
Reactions: NMBob, Agit21, Analog Kid and 1 other person

We sadly won't see any of these on a Mac, save maybe the smaller bezels.

I believe Apple will save the 5G/LTE for the iPad line, but I could be wrong.
J

More laptops because the pandemic has everyone stuck at home and each kid needs one for virtual school. The local schools handed out a 1000 or more Macs, most Airs, but the occasional 13".

Always glad to hear Mac shipments are on the rise.
Reactions: DelayedGratificationGene and centauratlas
S

Those things would make the computer versatile, user-friendly and productivity-focused. So, that's a hard "No" from Apple.
Reactions: MacBH928, pratikindia, NMBob and 4 others

justperry said:
Wait until Arm Macs, especially if they are faster and cheaper.
Click to expand...

Faster? Highly likely imo. I doubt they'd intro computers on a new architecture for them to only equal what they already have.

Shipments are not sales, so this is pretty meaningless. Oh and people still buy desktops and laptops? Why?

Not sure Silicon Macs with hurt PC sales. I have a iMac with an Intel processor that dual boots Win 10 because I need Windows for some programs. I am not sure the Silicon Macs will allow the dual boot option on Macs anymore. So it might spur some people to buy a Windows machine to run apps that won't or don't run as well on a Mac.
Reactions: pratikindia, NMBob and Agit21
F

these numbers wont look so good once they switch to ARM.
you watch
ARM computers: