Apple this morning introduced macOS 10.14 Mojave, the newest version of the operating system designed to run on the Mac.

macOS Mojave is a major update that introduces a range of new features like a Dark Mode, Desktop and Finder improvements, new apps, and a revamped Mac App Store, but unfortunately, the update drops support for a number of machines. 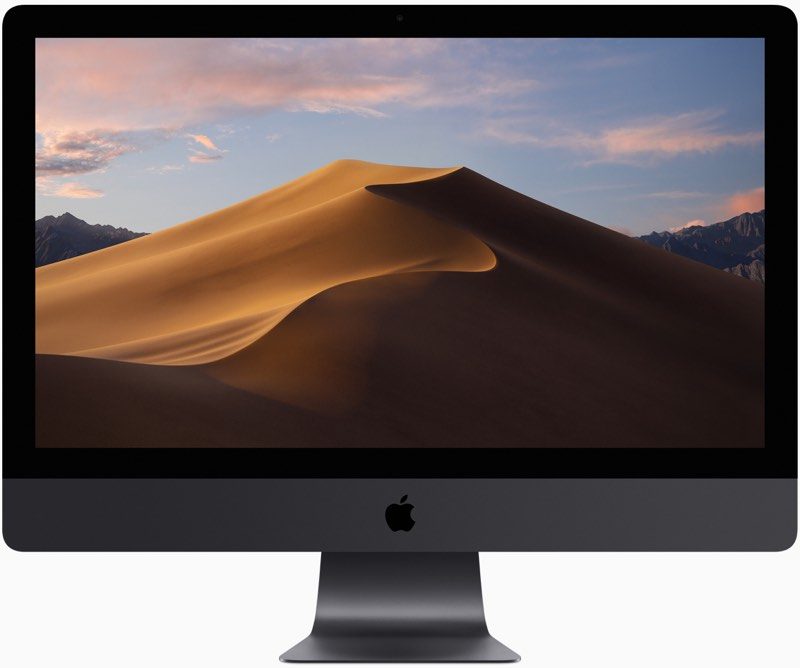 While macOS High Sierra was available for some machines manufactured as early as 2009, macOS Mojave is largely limited to 2012 or newer machines, with the exception of some Mac Pro models. Here's a full list:

As you can see, compared to High Sierra, the update drops support for the older plastic MacBooks, and MacBook Pro, Air, mini, and iMac models from 2009, 2010, and 2011.

These older machines will not have access to the macOS Mojave features, and will continue to run macOS High Sierra.

Developers can download macOS Mojave starting today, and the update should be available for public beta testers later this summer.

Damn. End of the road for my 2011 iMac then. Then again, I can't even install High Sierra because the hard drive died and it won't allow me to install it on an external SSD (something about "invalid firmware" which can't be updated).

I also have a 2011 MacBook Air which would have made a great machine to install the beta on. Sigh.
Last edited: Jun 4, 2018
Reactions: tevion5, wyarp, TheCoolGuy and 2 others
Comment

This is sure to make some mad.
Reactions: SeattleMoose, DeepIn2U, wyarp and 7 others
Comment

I was afraid that they will drop my mini, but thanks to them, all of my 3 Macs will get the update!
Reactions: jimthing and ikir
Comment

Now just give us a new Mac to use it on
Reactions: Marmee, hagar, navaira and 25 others
Comment

This may be the last update that supports the 2012 Mini then. If they are indeed going to keep the Mini as part of the lineup, then they need to get off their ass and replace it with something other than the neutered 2014 Mini.
Reactions: SeattleMoose, hagar, LlamaLarry and 33 others
Comment
P

Well that sucks, I have a 17inch machine. Have cash ready for new model, but waiting for update, not buying last years models.
Reactions: Macyourdayy, PowerBook-G5 and leesweet
Comment

My 2011 MBP which runs High Sierra just as fast as most newer macs because I upgraded to an SSD. I had a feeling they were going to drop support after these machines were moved to vintage status earlier. The logic board would probably blow up again with 10.14. We need those 2018 MBPs anytime now.
Reactions: alvindarkness, DeepIn2U, pratikindia and 2 others
Comment

I was wondering about this...they were quick to point out how iOS 12 would be compatible with all devices capable of running iOS 11, but, said nothing about macOS.
Reactions: DeepIn2U, MacsRgr8, lostczech and 4 others
Comment

Ok I guess that I’ll be downloading since my MacBook Air 2014 qualifies..
Comment

Yeah. Just as I suspected. All Metal supported Machines. No point in trying to patch this.
Reactions: Borin, dabotsonline, MrUNIMOG and 2 others
Comment

My 2010 MacBook Air had a good run with MacOS. At least Windows 10 still updates on it.
Reactions: ignatius345, HVDynamo, alvindarkness and 7 others
Comment

Hopefully they update the mac Mini before this! I'd like to replace my 2011 mini, but not with a 2014 mini.

Ah well... My 2011 MBP is officially old now and this makes me reconsider buying a Windows machine to replace it instead of a new Mac... If that's not planned obsolescence I don't know what it is. Longevity is one of the big advantages of owning a Mac but sadly it seems that they'd rather have a dark mode and a bunch of users forced to upgrade -> $$$.
Reactions: AdeMorgan, brucespoint, ThunderSkunk and 13 others
Comment
Y

It's too bad that my mid-2010 iMac—which still runs as well as the day I got it—will not be able to run Mojave. Fair, though; the thing is nearly eight years old.

For those whose devices will not run Mojave: do not fret; this is not the "end of the road" for your computers! Indeed, so long as Apple continues to support High Sierra (likely for two more years) your device ought not to be considered obsolete.

EDIT: and yes, while my iMac was indeed ~$2,500 back in 2010, the reality is that I have had no problems with it in eight years. Absolutely none. That to me is worth the Apple price premium. I'll gladly buy another iMac a couple years down the line.
Last edited: Jun 4, 2018
Reactions: Jynto, old-wiz, arefbe and 10 others
Comment

phew i read 2012 and my heart stopped for a second. got a late 2012 mbp
Reactions: macbug and Kynmore
Comment

Well i do need to upgrade my 2011 MacBook Pro as it’s on it’s last legs but this gives me the extra kick. MacOS was a great update at the keynote I’m impressed with where they are going with it.
Reactions: moostrax
Comment

Since my Mac has gone "Vintage" this year, and not getting Mojave, this is the year for a new Mac!
Reactions: orbital~debris, DeepIn2U, moostrax and 1 other person
Comment
L

This really, really, really sucks for me. I use a lot of storage, and I'm completely priced out of buying any Mac laptop with an equivalent amount of storage. A machine with 1TB would cost close to $3000 Canadian.

I wish they'd make them a couple of mm thicker to allow for M.2 SSDs.
Reactions: brucespoint, alvindarkness, DeepIn2U and 5 others
Comment

Good!
I have a MBA 2010 that won’t be bothered every day for an impossible update!
Yipppppie!
I read that the Apple will announce revamping the airPods with a iOS12 inspired design that will improve their podiness!
Last edited by a moderator: Jun 4, 2018
Reactions: moostrax and macsforme
Comment

OldSchoolMacGuy said:
This is sure to make some mad.
Click to expand...

And if Apple "supported" their older machines, they would lodge class action suits against Apple, claiming that Apple crippled the performance of their machines after the Mojave update.

Or they would complain that Apple keeps pestering them to an Update that (bazillion of others) have claimed slowed down their older Macs.
Reactions: orbital~debris, DeepIn2U, eastmanweb and 9 others
Comment

It’s fair to end suppport for my 8 year old Air. But why the hell not provide a fair replacement device?

I surely won’t spend more than a 1000€ for a 10 year old design a second time again. Also, the current MacBook with a 480p(!) FT camera and the butterfly keyboard are a rather ridiculous option if you consider the price point. For me the Back to the Mac campaign was a promise that Tim Cook actually never delivered.
Reactions: AdeMorgan, brucespoint, ignatius345 and 12 others
Comment
You must log in or register to reply here.
Share:
Facebook Twitter Reddit Email Share Link
Register on MacRumors! This sidebar will go away, and you'll see fewer ads.
Sign Up
Top Bottom