This thread will be used to discuss advancements in getting macOS 11.0 Big Sur running on unsupported Macs.

- These Macs so far are capable of running Big Sur properly, but WiFi is not yet fully stable (except on iMac14,x, i.e. Late 2013 iMacs), and (at least on iMac14,x) Fusion Drive performance is significantly slower than on previous macOS releases. See FAQ for more information.

- These Macs so far can boot Big Sur, but do not currently feature graphical acceleration support and, as with most 2012-2013 Macs, WiFi is not fully stable yet. See FAQ for more information.

* Not officially supported in macOS Catalina, but are fully capable of running both Catalina and Big Sur with a Metal-compatible GPU and upgraded WiFi/BT card.

You can install a Metal GPU in MacPro systems and some iMac Late 2009 to Mid 2011 systems.
You can install Big Sur on such systems, but currently it is not possible to get graphics acceleration when running Big Sur on a system with:

Big Sur will be almost unusable without graphics acceleration.
---

Q: Why did Apple drop support for my perfectly capable Mac?
A: Only Apple can give a definite answer to this. However there is evidence that it is based upon the CPUs being used in the now-unsupported Macs, which was the case last year with the Mac Pro 4,1/5,1. Intel decided to stop releasing firmware security fixes for Ivy Bridge and previous-generation CPUs. While they are technically compatible and supported in Big Sur, Apple has decided it is not worth the risk to continue supporting CPUs that have permanently unpatched security holes, putting users at risk. Also, terrible Fusion Drive performance under Big Sur on Late 2013 iMacs may be the reason Apple dropped support for that model.

While this is also not confirmed, another possibility could be that some of the excluded Macs feature WiFi chips that are no longer deemed fit for the next major release. This decision could be based on the previously mentioned security issues as well. The presence of graphics drivers for some of these newly unsupported Macs in Big Sur Beta 1 suggests this.

Q: What does unsupported mean for my old Mac?
A: This means Apple locks you out from running the stock installer of Big Sur and as important to mention, you cannot get OTA upgrades via Softwareupdate in the Systems Preference.

Q: So will my now unsupported Mac get macOS 11.0 Big Sur?
A: If your Mac had official support in macOS Catalina, they will likely be able to be patched to run Big Sur with minimal issues. As of writing, only WiFi appears to be unstable, and even then, not for all users.
If your Mac was unsupported before the release of macOS Catalina, support remains to be seen as graphics acceleration may not be feasible at this time. (OpenGL is deprecated but actually still supported for now in Big Sur, as mentioned in Apple's own developer documentation. However, there are other reasons why providing non-Metal graphics acceleration on Big Sur is proving to be very difficult.)

Q: I see that my (2011 or earlier) unsupported Mac does not have "graphics acceleration" under Big Sur. How much performance loss does this cause?
A: For example, minimizing a Safari window takes well under a second on a 2012 MacBook Pro with accelerated graphics, versus 14 seconds on an Early 2011 13" MacBook Pro (2.3GHz Intel Core i5) or 25 seconds on a Late 2009 MacBook (2.4GHz Intel Core 2 Duo). During these multi-second delays, the entire user interface can freeze up. So when one app causes a graphics processing delay, it can occupy the entire computer and prevent switching to another app. Video playback is still generally fluid on 2011 Macs with 2nd generation Intel Core processors, but videos are almost slide shows if you have a Core 2 Duo. Overall, a small number of users of these Macs may have a serious need for Big Sur and may be able to endure the slowdowns, but most users will find unaccelerated graphics performance to be simply unacceptable.

Q: When will my unsupported Mac receive macOS 11.0 Big Sur? / ETA when?
A: This is a community driven effort to try and restore support for various unsupported Macs. Community members are working as hard as they can, often in their spare time, to try and add back stable support for these Macs. Based upon changes in macOS Big Sur, it may be possible some Macs that were previously patchable in Mojave, Catalina, and other previous releases of macOS may not be patchable under Big Sur. Please do not harass the patch developers to go faster, release the patcher, etc. Please do not clog up the thread with useless posts asking if your specific Mac will be patchable. Big Sur has been just released and is still subject to change. Rest assured, the dedicated community of developers working on these patches are doing everything that they can to re-add support for as many Macs as possible.


A: Check the table containing current download links. Please do not assume that all links will be valid all time in future! Apple may pull these downloads from their servers.

Q: Where/how can I download a patcher tool?
A: Currently we have here more than as single known options:
Please remember it is highly suggested that you have a backup in place before installing new system software on your main devices, overwriting any stable releases.

Please remember it is highly suggested that you have a backup of your Macs firmware. You can use @dosdude1 (legacy) software called romtool (password of the software archive is rom) to save and store it externally. Getting a corrupted firmware can cause serious head aches.

Unsupported software can cause irreparable hardware damage or irrecoverable data loss and should be used at one's own risk.

Q: Where/how can I download the @dosdude1 Big Sur patcher tool?
A: @dosdude1 commented recently directly on this topic. There will be no such patcher for Big Sur available. Please do not clutter the thread asking for it again and again.

Q: Using the patchers listed above I have issues! How to post my problems?
A: Please first add a signature to your account describing your hardware setup. It will be added automatically to each of your posts. Please describe what you did and what you experienced. Add screen shots of your Mac using
Hold CMD+Shift+3 for whole screen capture of CMD+Shift+4 for capturing selection. Do not post blurred photos. Be specific and be precise, be sharp!


For legal purposes, the only official way to obtain a copy of macOS Big Sur at this time is to register with the Apple Developer program ($99/year) or, for the public beta, the Apple Beta Software Program (free). Please remember it is highly suggested that you do not install beta software on your main devices, overwriting any stable releases. Beta software can cause irreparable hardware damage or irrecoverable data loss and should be used at one's own risk.
Apple and all patch developers are not responsible for any potential damage or data loss caused by using pre-release software or unofficial support patches. Please use at your own risk.
Last edited: Friday at 1:35 AM
Reactions: Razor-G, Eschers, panzer06 and 129 others
L

That was fast, let the games begin!
Reactions: Eschers, AMP12345, William Rogers and 10 others
Comment
S

what kind of name is that anyways. Oh well macOS Bug sir, here we go!
Reactions: Eschers, SWAON, stevecc and 12 others
Comment

Instead of "Big Sur" they could have called it "iPadOS", I mean they are almost identical.
Reactions: moosethegoose2213, mazz0, Ben Naambo and 23 others
Comment

I'll be here for testing brother! let's get at it!
Reactions: MacTechAaron70, William Rogers, Claudio Moraes and 6 others
Comment

Its rumored that all Catalina supported devices will get Big Sur. Just too bad that the switch to arm will likely doom Intel Macs like how the ppc to intel transition doomed Macs like the PowerMac G5.
Reactions: markc2 and TimothyR734
Comment

jackluke said:
Instead of "Big Sur" they could have called it "iPadOS", I mean they are almost identical.
Click to expand...

If you haven't seen the post on rmc.ch/newsroom: I'm switching to Linux and won't develop a patcher this year. I also think this isn't a desktop OS.
Reactions: moosethegoose2213, Luc Aussenac, stevecc and 15 others
Comment

Awesome dosdude, you're already on it! I'm excited to help test it out.
I'm ecstatic about that version number. I think they should've done that with Mavericks or Yosemite, but better late than never.
Reactions: Larsvonhier, timidpimpin, Lowhangers and 2 others
Comment
H

Unfortunately not, my iMac isn't supported either. 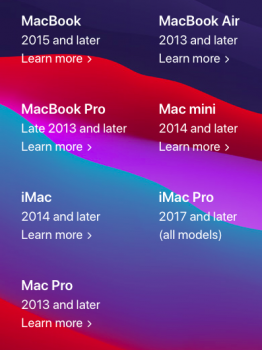 dosdude1 said:
This thread will be used to discuss advancements in getting macOS 11 Big Sur running on unsupported Macs.
Click to expand...

dosdude1 said:
This thread will be used to discuss advancements in getting macOS 11 Big Sur running on unsupported Macs.
Click to expand...

hi there (Dosdude1) please remove the code screen with 5 second countdown at boot on apfs volume on unsupported mac please give me ways to remove it
Reactions: Jorge Acosta and Alan Graham
Comment

Looks like all pre-Retinas and the first Retinas will be dropped. Mid 2013 and newer only.
Reactions: Yebubbleman
Comment

But reading that list I doubt, even if 2012 Mac having a Metal GPU should get with few efforts "Big Sur", I guess.
Reactions: iMac-iPad, atomizasser and TimothyR734
Comment

But reading that list I doubt, even if 2012 Mac having a Metal GPU should get with few efforts "Big Sur", I guess.
Click to expand...

19SK91 said:
Unfortunately not, my iMac isn't supported either.

Damn, oh well. This will be an adventure!
Reactions: TimothyR734
Comment
T

Seems like they dropped support for all Macs with Nvidia chips. I wonder if they're going to require the AVX2 instruction set in Haswell CPUs this time too.

19SK91 said:
Unfortunately not, my iMac isn't supported either.

MacOS support is completely arbitrary at this point. I miss when there was some kind of reason to justify dropping the older models.
Reactions: panzer06, Ungibbed, yurc and 18 others
Comment
V

Ternary said:
Seems like they dropped support for all Macs with Nvidia chips. I wonder if they're going to require the AVX2 instruction set in Haswell CPUs this time too.
Click to expand...

Maybe it's the Intel HD 4000 that's no longer supported. Everything with at least the HD 5000 or Iris Graphics is still supported.
Reactions: Larsvonhier, Alex-Microsmeta and TimothyR734
Comment
T