Apple has admitted defeat on the Safari design changes that have been present for the entire macOS Monterey beta, and the release candidate that was provided to developers today reverts to the old style that was available prior to Safari 15. 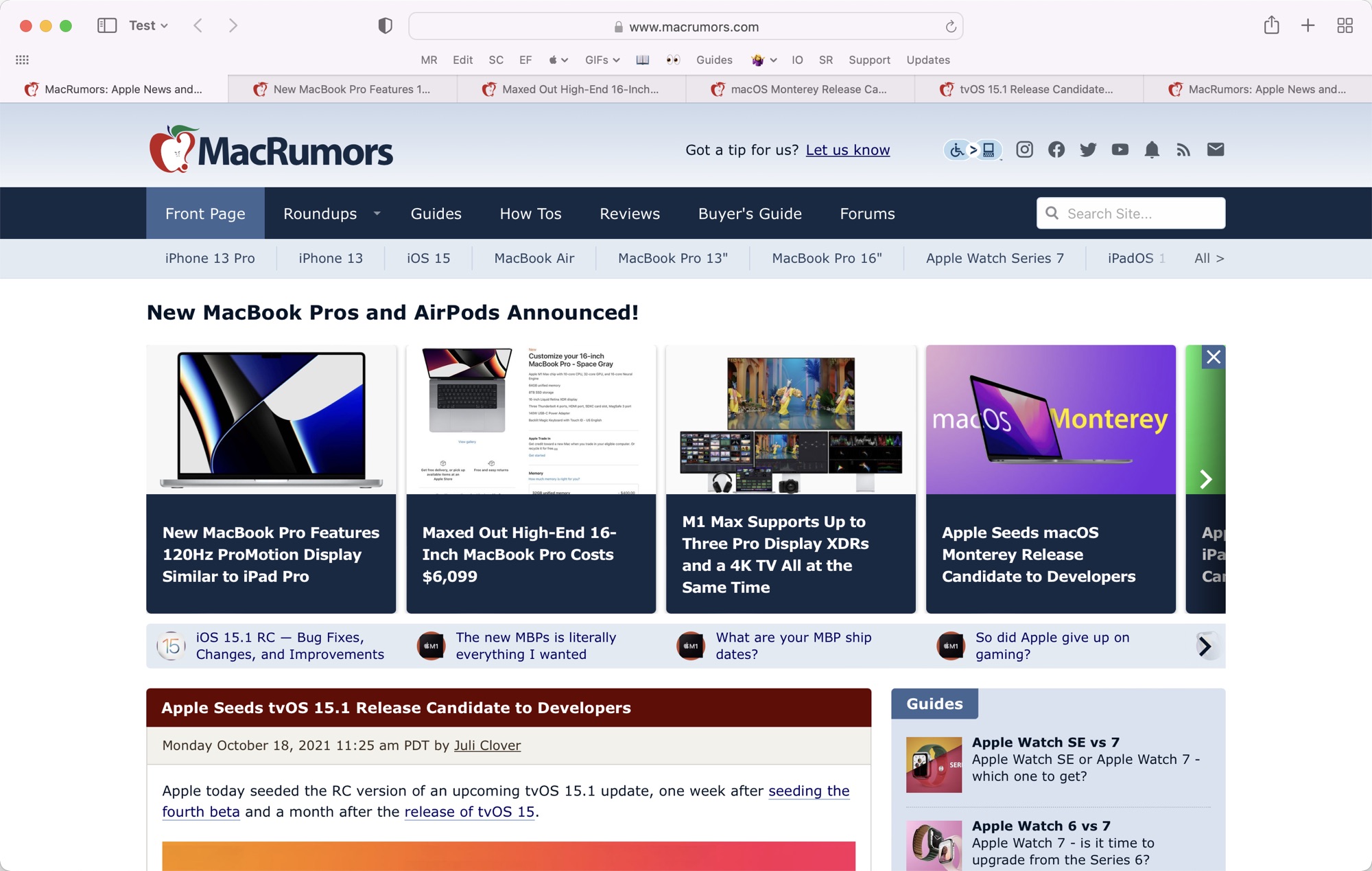 Safari design in the macOS Monterey release candidate​
macOS Monterey now features a standard Big Sur tab design that does have the tabs with spaces in between them, which Mac users who were unhappy with the design update will be pleased to hear. 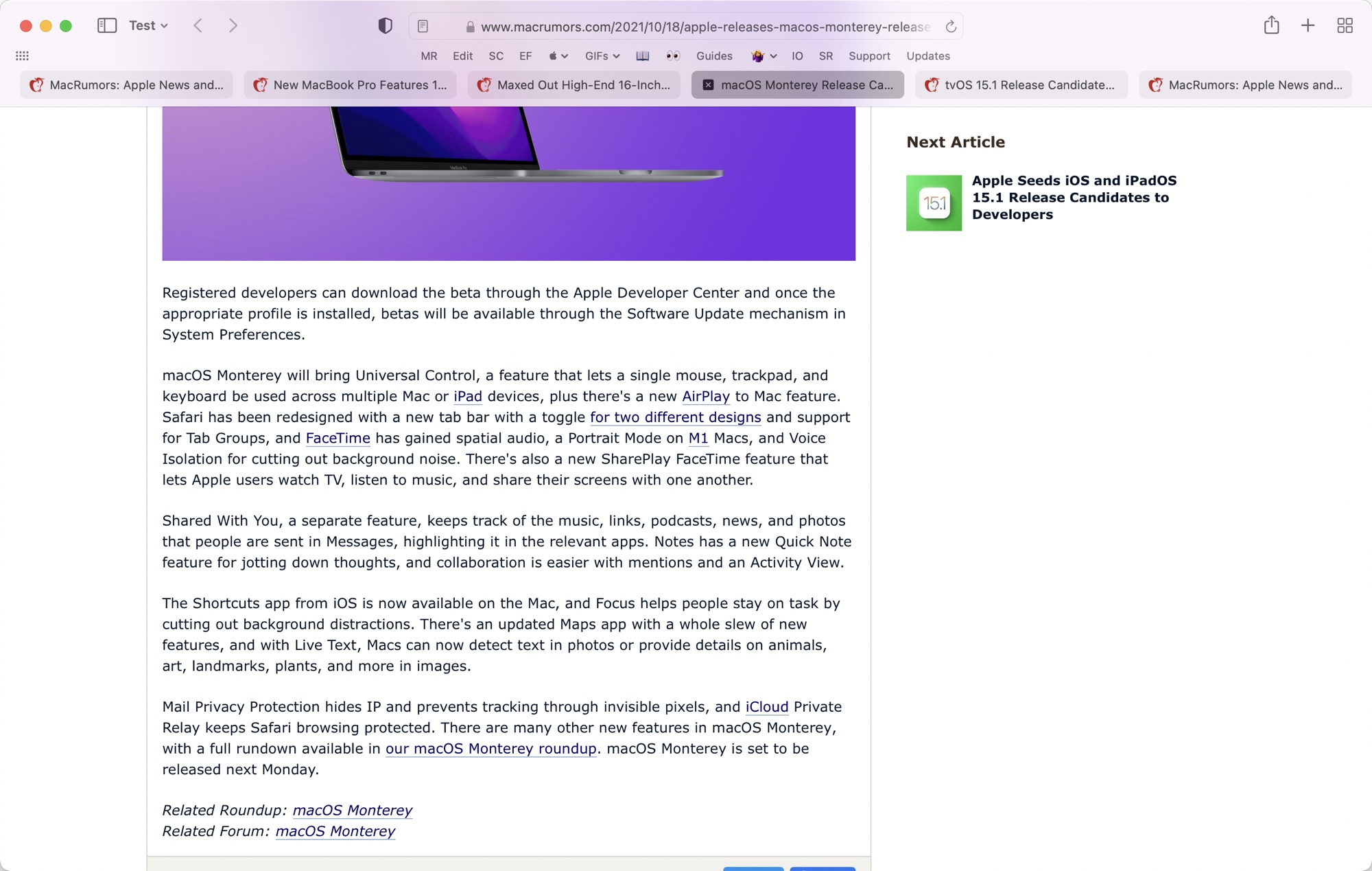 Safari design in the prior macOS Monterey beta​
The standard tab design is enabled by default and is labeled "Separate" in the Safari preferences, but for those who preferred the original Monterey Safari design, there's also a "Compact" option that merges the URL bar with the tab bar.

Apple in the prior Monterey beta moved the Favorites bar back up above the tab bar, so now Safari looks about the same as it did prior to when Apple made the Monterey changes. There are, however, still new Safari features like Tab Groups.

macOS Monterey with no changes to the Safari design will be coming on Monday, October 25.

Is the change a glitch or a feature?
Reactions: pratikindia, -BigMac-, GMShadow and 1 other person
D

I like the old tab design. I keep getting confused with the new one mistaking the active tab as the non-active one.
Reactions: Kilibee, Toutou, SixColors2000 and 18 others

And there was much rejoicing. 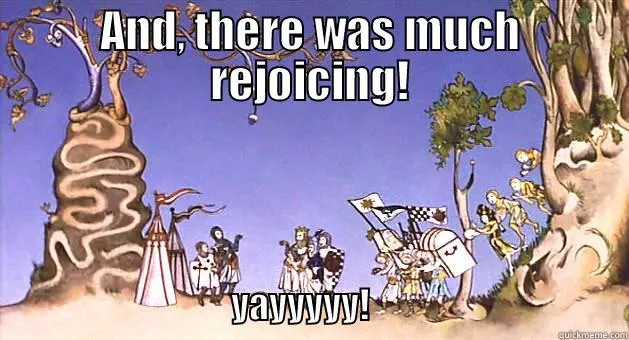 This truly is a new Apple.
Reactions: SixColors2000, JDHiro, DaJoNel and 15 others
A

I feel like the only person that has liked everything they did with Safari, both on Mac with that design and on iOS with the address bar dropped to the bottom of the screen. Does this also rollback the way the nav bar inherits colors from the web page?
Reactions: Reason077, Nykolaz, CosmicRadiation and 31 others

The return of the pre-2016 MacBook Pro era and pre-Monterey Safari design in the same day. The mac is in the right direction now
Reactions: Kilibee, johnscully, ErikGrim and 13 others

They removed the “show color in tab bar” option as well. I liked having it
Reactions: CosmicRadiation, revs, miq and 17 others
S

Disappointed in apple not sticking to their guns. I liked the new design. The ones who shout the loudest are normally the vocal minority.
Reactions: zach-coleman, grs, Ludatyk and 33 others

Any way to download and install this on Big Sur without a developer's account? Already running the regular Safari 15 on Big Sur.
Last edited: Oct 18, 2021
Reactions: FasterQuieter

Thank goodness for that, needs undoing for Big Sur / Safari 15 too
Reactions: calstanford, johnscully, steve333 and 4 others

amill9601 said:
They removed the “show color in tab bar” option as well. I liked having it
Click to expand...

Update, it’s only available for the compact tab bar now 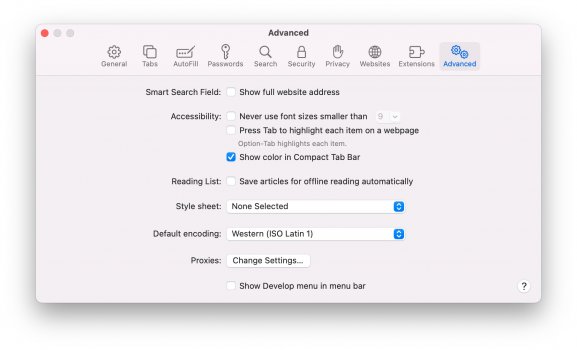 There is a god!
Reactions: miq, lupinglade, calstanford and 5 others

Actually, my tabs are still the nice beta compressed versions, not the derpy ones pictured in the OP.
Reactions: miq and Jemi9OD
J

Thanks to Daring Fireball for the eloquent rebuttal; someone at Apple must have been listening.
Reactions: H3LL5P4WN, Ludatyk, dtb200 and 22 others

Good. It was a terrible idea to copy from Firefox.
Reactions: H3LL5P4WN and NYC Russ

Let's face it. This is Apple's new design language. They want the notch to be their signature look kinda like Mercedes and BMW front grill. They will implement this to their iPad next. Maybe even force the notch design into their iMac desktop soon after.
Reactions: miq
E

Good stuff, hope they fill out URL field like it was before too