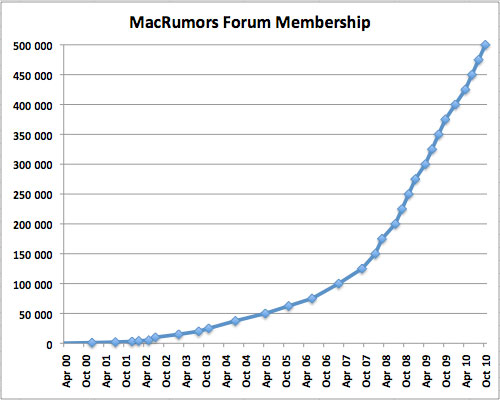 The MacRumors forums have reached half a million members, reaching a new milestone in forum participation. Tens of thousands of users joined MacRumors in recent months, fueled by speculation and discussion surrounding the release of iOS 4, the iPhone 4 launch, the controversy over the iPhone signal strength problem, and Apple's release of new iMacs, Mac Pros, and other products. Just shy of 20000 members joined in June and over 20000 in July, the highest monthly totals in MacRumors history.

MacRumors was founded in February 2000 by Arnold Kim and Blake Patterson. The forums have grown at an increasing rate each year since. Over the past 6 months forum registrations have reached about 500 per day (15000 per month).

A number of factors have contributed to the success and growth of the site, including MacRumors' reputation for careful evaluation and reporting of rumors and speculation and the expansion of our staff to cover more news. Our growth also reflects Apple's growth, with its expansion into new business areas, the rising number of Apple customers, and the attention focused on Apple by the press and the public in general, both in the U.S. and internationally.

Some members register for MacRumors seeking technical help, while others want to discuss the latest news and rumors. Many stay for years, reading and writing posts about both Apple and non-Apple topics as they participate in our ever-changing and ever-growing online community. Some forum members have been along for the entire ride. Of the forum posters who joined in 2000, 43% have been active within the last 2 years. The following members, listed by user name, have been logging in or posting for over 10 years: 63dot, balloons, barefeats, bigjohn, CompUsed, curmi, dsma, Ishan, jeremycrandell, kainjow, Mark Colangelo, mdntcallr, michaelrjohnson, nodttiurp, outZider, stukick, tviolation, and vanguys. Congratulations!

We thank our regular visitors, new forum members, and long-term members for their support over the years. In an online community the users, not just the meeting place, make the site what it is.

Wow! I didn't realize we had so many members. any idea how many are actually active?

I had enjoyed MacRumors for many years before I joined as a member. It was the buyers guide that got me hooked.

I actually get most of my Apple news here first.

Great work and congrats to all the staff at MacRumors.

I don't have figures for that, and we know that some users register, post a question or comment, stick around for that thread, and then disappear forever. But the last time we found a way to estimate the number of active users the result was "surprisingly many." Of course there are varying ways to define "active" since some users post regularly but many log in to visit/read without posting, and some users disappear for months or years and then return to posting.
P

Yeah, it was the buyer's guide that impressed me too. It's like no other, you'll never find anything like that elsewhere, really comprehensive but concise at the same time... The forum members are also great at giving tips and suggestions, and I really anticipate the posting of new rumors on this site everyday. Thank you macrumors gods!

Nice to see the community is growing.

Congrats Macrumors! By far the best Apple-focused community on the Internet!

I have been reading for many months now, and on reading this I thought I'd join the party. Fantastic site about fantastic products. Keeps on getting better.

Wow, looks like when i joined that it was already in seeing a massive up shift in members. iPhone/touch you are guilty, please step forward

Now why would someone troll MacRumors?

This is something I wonder also.

I had no idea that the membership was growing so fast. I have been reading for a while now and it was the buyer's guide that hooked me and the up-to-date rumors w/assessments that kept me here. Now I visit every day, usually without logging in, maybe I should log in more often.
T

It's so alive in the forums which is why I stay. I always get so many views and comments on my posts which is what we all look for in getting your questions answered or just sharing your insight or thoughts.
N

I <3 macrumors. haha. I like keeping up with tech and apple tech.

Congrats MR! You are now a half a million people's procrastination buddy! lol

hello, i have been visiting macrumors for a year now and this news made me sign up and express my gratitude to macrumors team. gj from czech republic