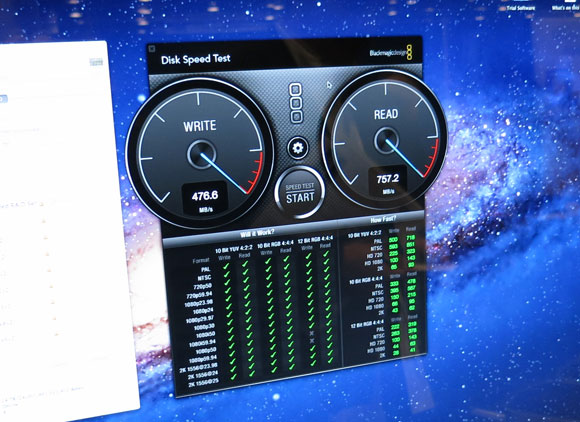 We briefly mentioned WDC's press release that they would be showing their new MyBook Thunderbolt Duo at Macworld. Here are photos from the show floor of the unit. As expected, the new drive shares the same appearance as their previous two drive MyBook hardware.

This new model, however, incorporates two Thunderbolt ports that allows the units to be daisy chained with each other to create a single logical drive. 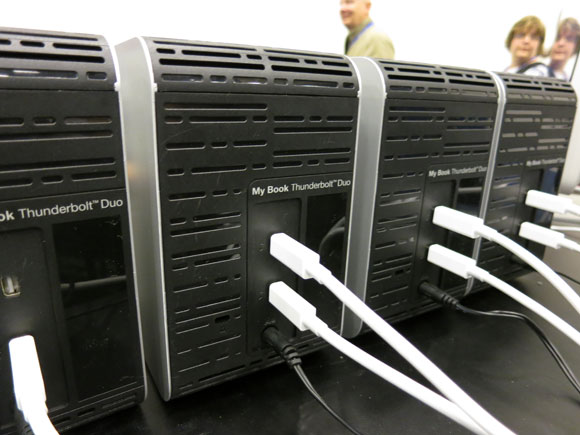 At the show, WDC was showing 4 devices daisy chained with Thunderbolt in a striped configuration. Each MyBook Thunderbolt Duo had two 3TB drives, giving a total capacity of 24TB that appeared on the desktop as one contiguous 24TB device. 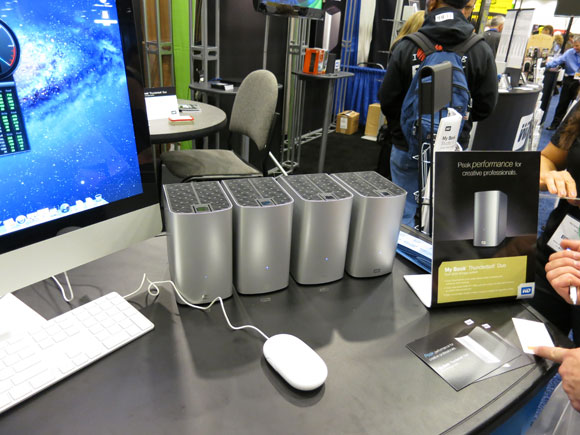 The individual drives within each unit are user serviceable/replaceable and can be configured in either RAID 0 or RAID 1 configurations. The product will be available this quarter with pricing to be announced then.

Kinda cool I guess. Probably way too much money though.
Comment

What happened to the days when just 1 TB was cool? When did I stop being cool?

Edit: Is it just me, or is their desktop set up with a wired mighty mouse? Apple doesn't even sell those anymore, do they?
Comment

RAID0 over Thunderbolt sounds pretty snappy...just hope you don't have a disk failure!

I'm loving all of these Thunderbolt products, but they're just too expensive to reasonably consider for non-media professionals at the moment.
Comment
Y

If support other Raid config will be nice
Comment
H

Is this a bootable setup? With all that bandwidth it seems like an ideal interface for connecting SSDs.
Comment

What happened to the days when just 1 TB was cool? When did I stop being cool?

Edit: Is it just me, or is their desktop set up with a wired mighty mouse? Does Apple even make that anymore?
Click to expand...

One day it's going to be all SSDs in there. Imagine that!
Comment
M

I think I just peed a little.
Comment
E

Come on really, who needs more than a 128GB SSD drive!

(Would love to get one on my MBA)


Jaro65 said:
One day it's going to be all SSDs in there. Imagine that!
Click to expand...

And about the size of a deck of cards.
Comment

ArtOfWarfare said:
Edit: Is it just me, or is their desktop set up with a wired mighty mouse? Apple doesn't even sell those anymore, do they?
Click to expand...

I would imagine at a trade show, there are either a) a buttload of wireless mighty mouses that would confuse the macs, or b) hackers trying to download demo software through bluetooth exploits.
Comment

Where did you get that price at ?
Comment
C

If I purchase one of these would I be able to go:
Thunderbolt port -> MyBook Thunderbolt Duo -> DVI adapter -> Monitor

FakeWozniak said:
I wonder if they come diskless.
Click to expand...

If I purchase one of these would I be able to go:
Thunderbolt port -> MyBook Thunderbolt Duo -> DVI adapter -> Monitor

I wonder how many of those Pegasus R6 RAID enclosures it would take to saturate the TB interface if setup in a similar fashion?
Comment
E

Peace said:
Where did you get that price at ?
Click to expand...

It's not a real price, just a joke Probably a good guess going on the other Thunderbolt peripherals though.

What happened to the days when just 1 TB was cool? When did I stop being cool?
Click to expand...

The next big thing in storage is the Petabyte (PB) and I'm sure the marketing types are going to go gaga calling it "a million billion bytes" which it is. My guess we will see that before 2020.

To quote the greasers of my father's generation, "You stop being cool when you care about being cool."
Last edited: Jan 26, 2012
Comment
E

Think we best keep you away from the Intel 720 then. It could make you explode.

Who needs the old fashioned Mac Pro! Now I can see what Apple is holding back on the new Mac Pro and maybe even new versions of Final Cut Pro.
Comment
B