Many bloggers and media (including MacRumors) have started to descend on San Francisco for Macworld Expo 2008. SetteB.IT managed to take an extensive gallery of photographs from the expo floor, including Apple's floor displays which were covered in their usual black tarps: 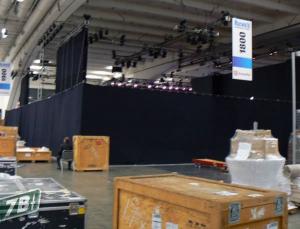 They even managed to get a blurry photo of a presentation, which appears to be showing GarageBand: 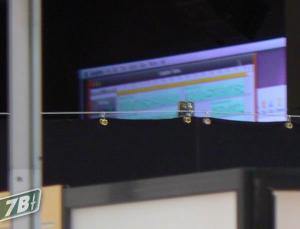 Meanwhile, MacNotes.de posts their gallery of Macworld Expo photos. They had arrived at the Apple Store as they were unloading a shipment on Friday night. One of the packages was marked "Visual Merchandising", presumably for Tuesday: 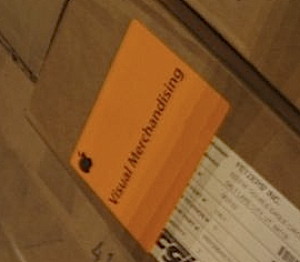 Meanwhile, the "Something's in the Air" banners have generated an enormous amount of speculation about what Apple might be introducing at Macworld. Johncarync points out the banners Apple has posted the past few years (Life is Random, iPod banners, The first 30 years were just the beginning.). t0mat0 compiles all the varying possibilities discussed in the 800+ responses. There has been suggestion, however, that it is simply a hint to the name of the upcoming thin portable.

I have been dreaming about wirelessly controlling my DSLR camera via an apple tablet. Photographers, can you imagine walking into your frame and making changes to model positions and seeing your shot with liveview and a wifi grip? Oh my!

If there is one thing I want for MacWorld...

Git rid of the price increase on the Blackbook!

I So Badly Want To Know What Is Behind Those Really Thin Black Sheets!!!!!!!!
I

Bah! someone! please "accidentally" rip the covers off! BAH!!!
I

iTeen said:
awww...but it makes the black, "more exclusive". and it comes with slightly higher standards.

ironically the cheaper one looks so much better

iTeen said:
awww...but it makes the black, "more exclusive". and it comes with slightly higher standards.

I'd be perfectly happy if they offered the color in all three configurations. It just doesn't make sense to me why they don't do that.

nice pics! we all want to see under those covered banners, but somehow, not seeing makes me more excited! the tradition continues!

Oh goody... new source material for the PhotoShop Fakers.
I

For those who were suggesting that "something in the air" might relate to wireless power... there's an article in the February issue of Popular Science about exactly that, so it's not so far fetched after all.


I'd be perfectly happy if they offered the color in all three configurations. It just doesn't make sense to me why they don't do that.
Click to expand...

yea i guess that would be cool, i suppose. it would have saved me a few bucks. I am really hoping for aluminum macbooks. i hate how easy the black stains....yuk!

I wonder what they are doing with Garageband, any other year I would have thought that it may be the next version, but they updated late last year so i don't think there will be a new one.
B

We might finally see that Asteroid getting shape. Wasn't Asteroid assumed to be an interface for instruments?
D

Something in the Air

Doesn't this mean Phil Collins is coming
B

Or Garageband becomes social? Make music with your friends online?

In Sams World said:
Wonder whats going on with Garageband...
Click to expand...

I don't know, but notice the yellow band at the top of the garageband window - that's what you get when you set your loop area to make a ringtone... he might have been showing off how easy it is to make a loop or your own ringtone from GarageBand.

Yay covered banners! It's that time of the year again.
B

benspratling said:
I don't know, but notice the yellow band at the top of the garageband window - that's what you get when you set your loop area to make a ringtone... he might have been showing off how easy it is to make a loop or your own ringtone from GarageBand.
Click to expand...

It's the most simple answer indeed but note that you will always use the loop function as otherwise you will need to compose an entire song to playback. Don't think SJ will do that effort
J

movie rentals in the air!

There is an amazingly diverse collection of theories in the "There's Something in the Air" thread, about what that slogan means.