Microsoft is continuing its anti-iPad ad campaign, today releasing a new commercial comparing the Surface RT to the fourth generation iPad. The ad, which displays a Surface RT tablet and an iPad side-by-side, highlights both pricing and size differences between the two products.

Microsoft also uses the spot to summarize other iPad shortcomings that it has highlighted in previous ads, including the iPad's lack of an integrated kickstand and keyboard, the absence of dedicated productivity software on the tablet, its poor multitasking capabilities, and its failure to offer expandable storage.

Despite its vigorous advertising campaign, Microsoft revealed last week that its Surface lineup had earned just $853 million in revenue for the company, less than a $900 million writedown the company took for the Surface RT earlier this month.

Oh jeez....is it me or are these ads just getting more embarrassing?!

Average consumer: "Hmm, I have a limited amount of funds to spend on a tablet, I guess I'll go with the leader"

I'm sure sales of the Surface will make up for the cost of producing these kinds of commercials.

(I'll have you know I said that with a straight face! )
Q

Microsoft should really just focus on itself rather than always benchmarking with the iPad.
S

Seriously Microsoft, stop touting that awful kickstand. Especially if you're not even going to show the iPad's Smart Cover in the comparison.
B

Fanboy aside... thats pretty impressive. If Apple did that, you'd be lined up around the corner. The only turnout is the name Microsoft.
C

Actually to be honest I liked it how in a way they did do a relatively far comparison, showing that the Surface is indeed heavier than the iPad. Either way the Surface for the price actually seems rather reasonable and enticing.

All I saw was that beautiful woman in the video chat...
C

I predict the RT will be dead in two years, max.

The Pro will probably stick around because improved technology can remove its major shortcomings, and it can actually run things.

Ironically, the 16GB iPad has more free space for data and apps than the 32GB Surface RT.

BTW. The Surface RT (or otherwise) cannot be used on the lap with that kickstand and that flimsy keyboard whereas an iPad with a keyboard case can.

If you want a stand, get a smartcover.
T 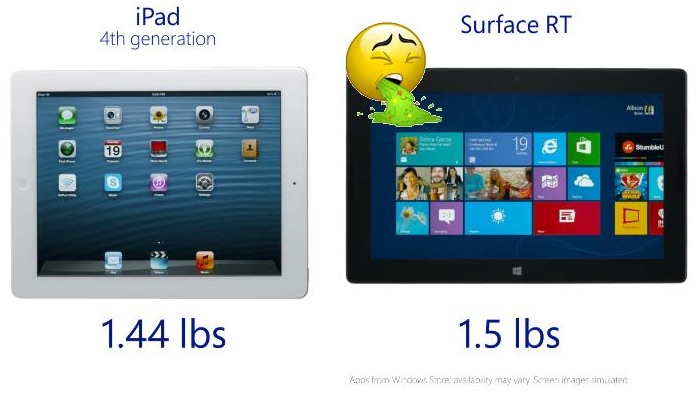 That's one of the best Microsoft ads I've seen in a very long time. At least as good as the Apple ones, maybe more-so.
V

um did anyone else notice the girls face on the microsoft surface side during the video conference?

maybe its flash/youtube.. or is that really in the commercial? lol

the quality of the video on the surface side doesn't look as good to me. not that i was expecting it to.
S

How about getting someone who actually knows how to use an iPad to play the part?

These ad campaigns are not helping you sell your tablets. Try something else.

Don't know why they would go to all the trouble with the comparison and not compare the price with the same 32gb version, to make the iPad look even worse! One of the downsides of Apple is definitely the price increases for doubling memory, all about profit rather than component cost.

This is the first ad of theirs I enjoy (except for the Super Fanboy one). Well done, all the stuff is true, I just wish they had more apps available. Then it would be good.

thejadedmonkey said:
That's one of the best Microsoft ads I've seen in a very long time. At least as good as the Apple ones, maybe more-so.
Click to expand...

Seriously? My immediate thought was it looked like some poor PowerPoint presentation.