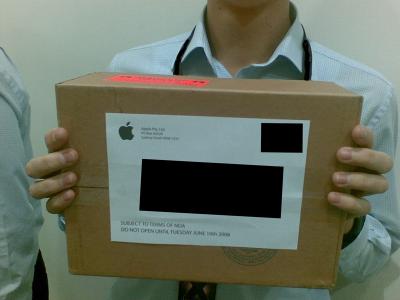 More sealed boxes are reportedly arriving at Apple Stores worldwide with Arstechnica reporting that the London Regent Street Apple Store has received "a single box that is padlocked, and under orders to be put in a safe until Monday."

The image of the above box was sent in anonymously and correlates to the box that supposedly was sent to some Australian resellers.

We've also heard that Germany's T-Mobile has already received subsidized rate plans for the iPhone coming in at a subsidized 99, 199 and 299 euros. These are prices for hardware with a 2 year contract, but may only represent two distinct models, as the amount of subsidy depends on what rate plan is chosen. For comparison, T-Mobile Germany currently offers 4 prices (99, 149, 199, 249 euros) for the 8GB iPhone alone depending on the rate plan chosen. Meanwhile, the current 16GB iPhone (499 euro) has not been eligible for any discounts regardless of rate plan.

Finally, news is coming out of Spain that the new iPhone will be sold there starting at 99 euros by Corriere.it.

Apple will be announcing their new products at the WWDC 2008 keynote speech on Monday, June 9th at 10am Pacific. We will have live web/photo coverage at MacRumorsLive as well as Twitter, SMS and Spoiler free coverage.

I thought these pictures had already been debunked?

Hmm... The iPhone wont be for sale tomorrow, but I bet it will be on display... And stolen by the end of the day.
T

Most likely it's a sales kit with a picture of the new iPhone and all the information and not an actual new iPhone.

I wonder if you can get a subsidized phone if you're an existing AT&T customer.

Ima get my hands on one of those the first day it comes out!
J

Wow, seems like those rumours of the Australian boxes were true...who would have thunk?

Yup, seems like iPhone v 2.0 might finally be sold within the next weeks. I cannot wait until 1000 hrs tomorrow!!!
B

hopefully we will get a "one more thing"

someone in the chat room admitted it
W

Enough with all these rumors and hype ups...just give me my phone already.
T

"a padlocked" box. Too bad it's cardboard.

Aznsensation45 said:
I wonder if you can get a subsidized phone if you're an existing AT&T customer.

Ima get my hands on one of those the first day it comes out!
Click to expand...

I think you're looking for the thread two stories down...

Well since the boxes are fake, do you think the prices listed are?

And what are those prices in american?
K

if all these stores are getting seem to be display pieces, does that mean we'll only get an announcement on monday and nothing to take home?

hmmmmm
i've got to say, i think there's like a rumor 'gang' doing all this

who the hell is in the pic anyway and why isn't he wearing apple uniform or whatever its called, im exhausted and cant be bothered to think.

what makes this worse is that the open time says Tuesday.. Isnt this box meant to be from a London store? also... I've never seen an Apple Employee with that shirt on

EDIT: no mention that the box shown is the London box... debate?

hoits2000 said:
Well since the boxes are fake, do you think the prices listed are?

And what are those prices in american?
Click to expand...

someone in the chat room admitted it
Click to expand...

okay
I now believe it.

The good side of the grass.

Doesn't look big enough to be my long anticipated mini.....

The photo is just some photo sent in. It might easily be fake.

That being said, Ars is reporting that London Apple store also received a locked down box. This is independent of the Australia story.

Thanks. If thats true, thats not bad at all. 16gb for that? It would be sweet for 32 gigs!

The photo is just some photo sent in. It might easily be fake.

That being said, Ars is reporting that London Apple store also received a locked down box. This is independent of the Australia story.