Apple is continuing to refine the unpopular Safari design that it introduced in macOS Monterey, and the latest beta tweaks the position of the Favorites bar. 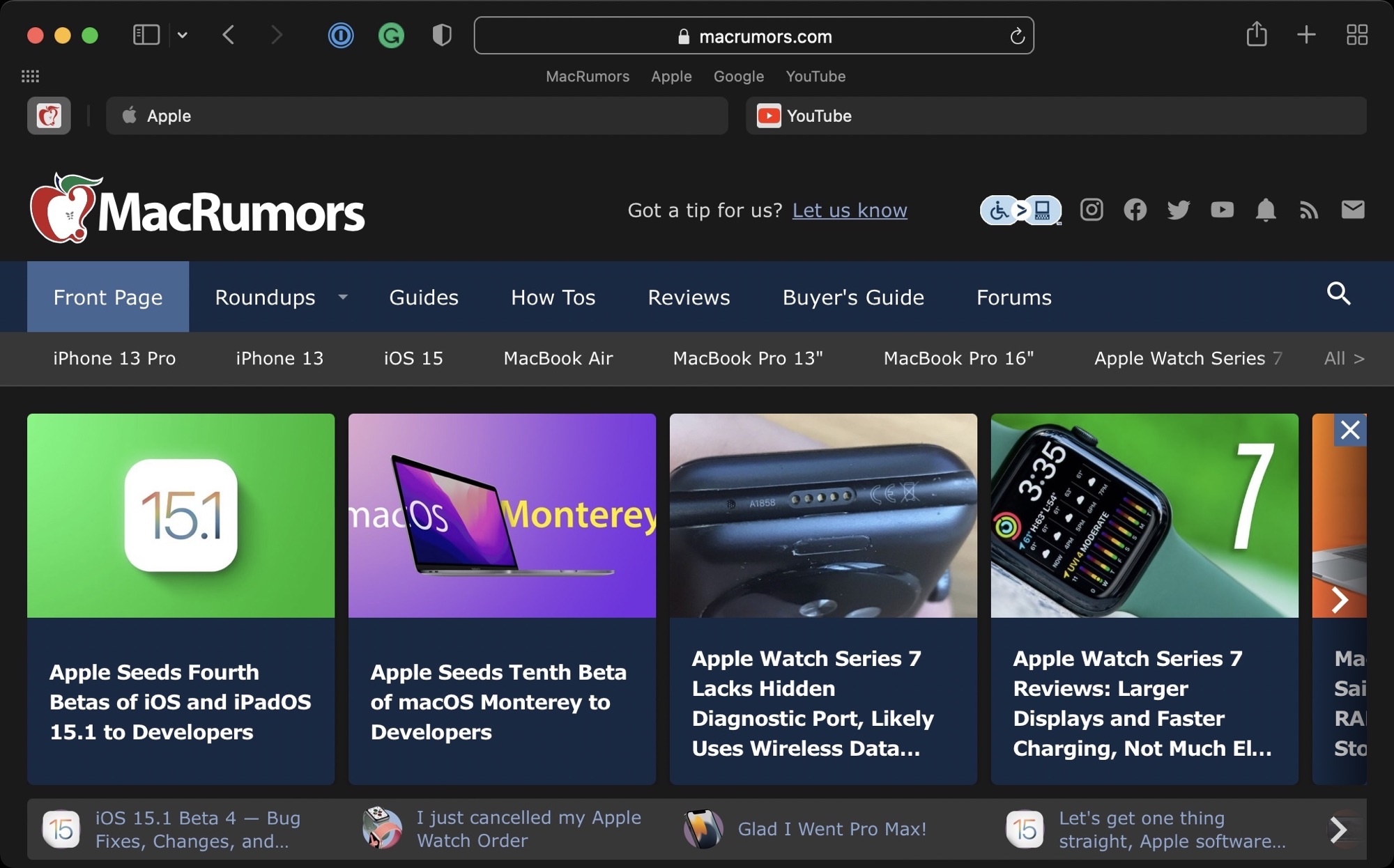 The design initially had Favorites located below the tab bar, a departure from the location in prior versions of macOS, including macOS Big Sur. With the tenth beta, Apple has relocated Favorites and put it back above the Tab bar where it was originally.

Apple has been changing the design of Safari throughout the beta testing process, but for many, the new look continues to be inferior to the previous Safari interface, especially when it comes to the tab bar design.


https://twitter.com/i/web/status/1448360720962240513
Apple has also released Safari 15 with the Monterey-style design to macOS Big Sur users, and the same Favorites change may be coming in an update set to be released in the near future.

macOS Monterey is likely nearing a release as we are expecting it to come out right around when new MacBook Pro models launch. Apple is holding an event on Monday, October 18 to introduce the new machines, so we may not have too long to wait until the update launches.

At this point it’s just gonna be old safari with options to become new safari
Reactions: NoelWalker, ImaginaryNerve, amartinez1660 and 18 others

I love the new tabs (even their colors!) but this was one thing that just wasn’t working for me, weeks/months in. Glad for the little tweak.
Reactions: severe, creativesmith, Mikkis and 3 others

These changes make nothing better. the thinner fetish has now spread to the software interfaces with no care for usability and discoverability, just how the product marketing materials look.

just go back to previous interface and add tab groups. Done.
Reactions: bluecoast, LunarFalcon, Gameboy70 and 22 others
B

It feels like they’re going to rework the tabs - or perhaps as with iOS safari, simply add in an option to revert it back to the previous design.
Reactions: Babygotfont and mburkhard

I like they are continuing to test out these changes with feedback but allow it to work like it was before
Reactions: Babygotfont, Krizoitz and mburkhard

Apple: "What should we tweak on Safari next?"

I’m glad this change was made. One of the things I was most frustrated by. Now, darken the active tab color and it’ll be pretty decent overall.
Reactions: severe, amartinez1660, sydneysider88 and 2 others
J

Hopefully it’s getting better and better. It’s been too long of a wait now.
Reactions: sydneysider88, svish, Babygotfont and 1 other person
V

Microsoft was already putting application buttons and text entry fields in title bars in Office for Windows. Now Apple has started doing the same thing in MacOS. Did anyone ever consider what happens when a window title bar becomes so crowded with buttons, text fields and tabs, there is no more space to drag and move the window? Do Microsoft and Apple now think that everyone should run only 1 application at a time, with each application covering the entire screen so nobody uses multiple windows anymore?
Last edited: Oct 13, 2021
Reactions: amartinez1660, sydneysider88, Babygotfont and 7 others

This is what drove me away from Facebook - they couldn’t stop changing the UX when it was working fine as it was. Sure, innovation is great but not at the expense of usability. “Next generation Apple Car to feature speedometer in the glove compartment and aluminium windscreen…”
Reactions: amartinez1660, Babygotfont, steve333 and 3 others

TheYayAreaLiving said:
Hopefully it’s getting better and better. It’s been too long of a wait now.
Click to expand...

Must be real challenging to make all three Safari platforms work as well. (iOS, IPadOS, MacOS)
As a comparison Firefox has gone though multiple iterations of browser interface layout plus their own variations of enabling privacy measures. They are all doing this is my point across variety of devices.
Reactions: Babygotfont

THANK THE FREAKING GODS they move the favorites bar back where it belongs. I don't know what the crap they were thinking. The tab bars should be "anchored" to the page!
Reactions: sydneysider88, Babygotfont, Nermal and 1 other person

If it ain't broke, don't fix it! - that was always my approach to software design. Some things just don't need to be played with!
Reactions: bluecoast, jorisw_, Babygotfont and 2 others

Apple has a great game that goes along the lines of

- make a bunch of changes that are form over function

- listen to the complaints and make some minor changes

- revert back to the original design the following year and call it “new”
Reactions: Asarien, Rivvvers, sydneysider88 and 8 others

As long as the standards body keeps driving changes to the HTML specification they will be updating browsers. There is now HTML6 out there.
Reactions: Babygotfont and KeithBN
8

I still get confused with what tab is currently active, they really need to fix that.

Also, why won't it let me automatically open my bookmarks bar to the side? I have to click on the bookmarks button, then bookmarks, it's very annoying.
Reactions: creativesmith, nightflight82, sydneysider88 and 3 others
8

Realityck said:
As long as the standards body keeps driving changes to the HTML specification they will be updating browsers. There is now HTML6 out there.
Click to expand...

I follow tech news pretty closely and I had absolutely no idea HTML6 existed.
Reactions: Babygotfont and ErikGrim
J

I hope they fix the tabs, and then I hope they fix them in iPad OS as well. This is an unmitigated disaster of poor UI design. On the other hand, If Apple’s goal was to entice users to switch to Firefox for the first time, then congratulations, this is a resounding success.
Reactions: amartinez1660, bluecoast, Babygotfont and 1 other person
M

I'm just glad they've left space at the top next to the URL bar. With the new firefox, if you have a bunch of tabs open, it's hard to grab and move the window.
Reactions: Babygotfont

827538 said:
I follow tech news pretty closely and I had absolutely no idea HTML6 existed.
Click to expand...

Its still way early but here's a article on what it entails. 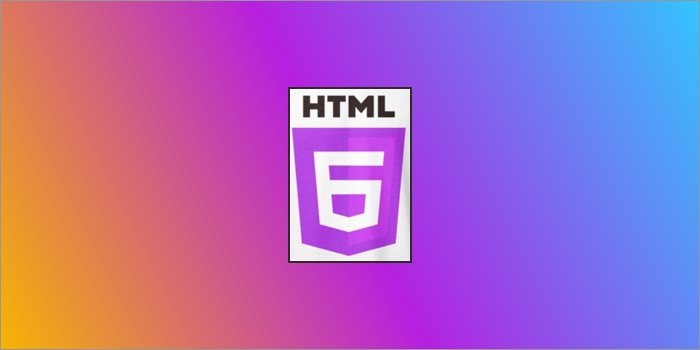 HTML6 is Coming - Here is a Sneak Peek

HTML, the language of the web, is one of the most well-known web technology. Let us know what new is coming in HTML 6 future version.

I hope some of you know that Safari isn't the only web browser you can use on your Macs....
Reactions: Babygotfont
T