A fairly clear image of what is said to be the logic board for the second-generation iPad Air suggests that the device will indeed come with an A8X chip, as hinted at in earlier images shared over the weekend.

Furthermore, the new image published by Apple.club.tw [Google Translate] seems to point towards 2GB of RAM for the device. Though the image of the RAM on the logic board is low resolution and fuzzy, enhancing the contrast and the brightness reveals a bit of information about the numbers on the chip. While the first letter is entirely blurred, it is the second character that is key to determining whether the chip is 1GB or 2GB.

Multiple rumors have suggested that Apple will double the memory in the second-generation iPad Air, which would give it the power to support split-screen multitasking. Last week, an image depicting a 2GB Elpida RAM module surfaced, and it appears that photo showed a set of the same chips seen in the logic board.

Apple has stuck to 1GB of RAM for several generations of devices, including the iPhone 6 and the iPhone 6 Plus, but Apple may have big plans in mind for the second-generation iPad Air 2 as it also appears to be gaining an A8X chip.

While Apple used an A6X chip in the fourth-generation iPad, the iPad Air used the same A7 chip as the iPhone 5s clocked at a higher speed. The company was widely expected to utilize the same strategy in the iPhone 6 and 6 Plus for the iPad Air 2, but a faster A8X chip may have been utilized to power features like split-screen multitasking. There have also been some rumors of a "Retina HD" resolution for an upcoming iPad, which would likely require a more powerful chip.

Along with 2GB of RAM and an A8X processor, the logic board image appears to depict a 16GB Hynix flash module (denoted by the "TDG" characters on the chip), suggesting that the second-generation iPad Air will continue to be offered with 16GB of storage at the low end. It's possible Apple could do what it did for the iPhone 6 and 6 Plus, offering a 16GB solution along with 64 and 128GB options, doing away with the 32GB tier of storage space and sliding the 64 and 128GB tiers down $100 from their current levels. 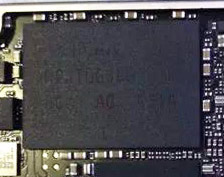 Apple is expected to unveil the second-generation iPad Air at a media event that it is holding this Thursday on its Cupertino campus. The event may also see the debut of Retina iMacs and another preview of OS X Yosemite ahead of its public release.

Well we will all know on thursday.
F

ahahahahhaha, 16gb
what is apple thinking

I'm all in for the maxed out one!

16gb option still? That is most heinous.
M

Apple has to do something to boost new iPad air sales (the current iPad Air has not been selling very well), and one way to do it is to introduce true multi-screen/task features with 2GB RAM.
D

That is good stuff.
I've been waiting for the new one for a month already... I really need an iPad as mine was stolen in the airport 2 months ago....

Does it usually go on sale in the same day, or will we have to wait? How was it one year ago? I don't think it will be the same due to crazy demand on iPhone 6, but I was just wondering...

My iPhone 6+ already feels old with A8 and 1GB RAM!

16GB? That's pathetic with the iPhone. Even worse for the iPad with it's potential for larger apps. I was hoping for a 256GB option. I guess that will have to wait for some sort of iPad Pro.
M

Incentivizing you to purchase the 64 or 128 GB versions.
U

OMG, 2GB of RAM! I'll be able to do all these more things that I haven't been able to do until now!
8

Apple needs to stop being so stingy with storage...
K

Ahahahahahahaha. What are you thinking? It's all personal preference.

Ever since I got my Note 3 and hopefully my 6+ whenever that arrives, I haven't had the need for a tablet anymore. With all these 5+" phones coming out, I think the tablet market is going to start tanking similar to how netbooks died out. Of course there will always be a market for them, it just wouldn't be as big as before.
D

I wasn't planning on upgrading my iPad Air but if this news is true...well...now I don't know!

nepalisherpa said:
My iPhone 6+ already feels old with A8 and 1GB RAM!
Click to expand...

No doubt that Apple wants to differentiate the iPad from the iPhone, particularly now since there is a large screen iPhone 6 Plus available. IMO, there's a huge difference between a 6 Plus and even an iPad mini, but lots of people might view the 6 Plus as a replacement for both a phone and iPad.
F

except, when you accidentally press the sync button and itunes loads >16gb of apps onto your iPad and you need to update iOS 9 but then it's complaining about storage issues.

Same with iPhone 6. Why increase the baseline model when it already sells so well?

mrhick01 said:
Incentivizing you to purchase the 64 or 128 GB versions.
Click to expand...

In my case I bought the 64GB version last year since supplies of the Retina Mini were tight for several weeks and that's all they had available. That said, I've come to actually use enough of the extra capacity, so in my case, this would be a $100 price drop. I agree that the 16/64/128GB capacities incentivize upselling, though.
You must log in or register to reply here.
Share:
Facebook Twitter Reddit Email Share Link
Register on MacRumors! This sidebar will go away, and you'll see fewer ads.
Sign Up
Top Bottom