More Than 100 Million People Worldwide Use an Apple Watch

The Apple Watch continues to be the most popular smart watch on the market, and in Q2 2021, Apple hit a new user base milestone, according to Counterpoint Research's Global Smartwatch Shipments Tracker. 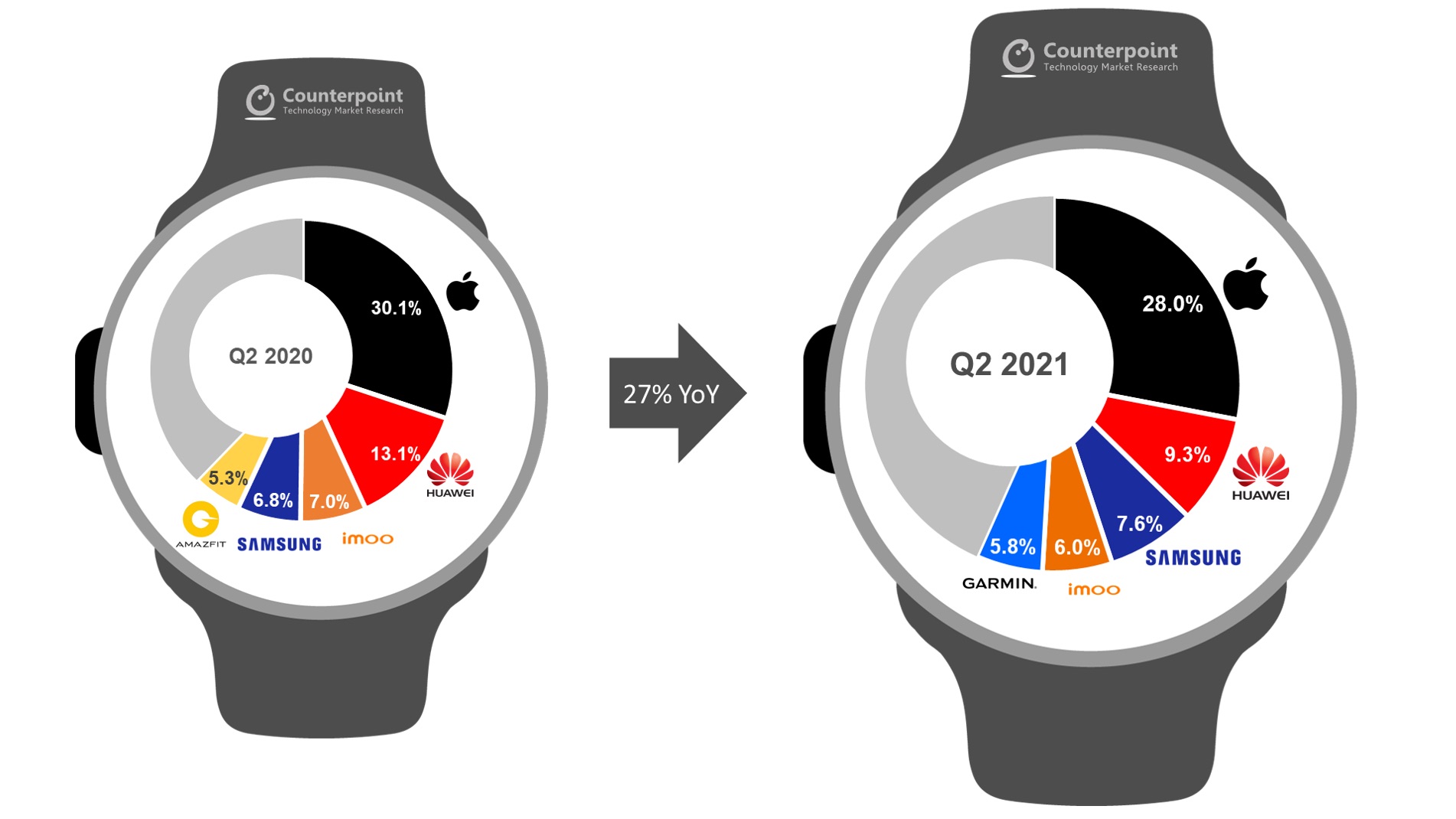 There are now more than 100 million active Apple Watch users thanks to the device's design, health features, and related services. It's possible Apple hit this milestone even earlier than 2021, as Neil Cybart said in February that based on his estimates, Apple reached 100 million users in December.

In the second quarter of 2021, global smart watch shipments were up 27 percent overall, and Apple was able to maintain its number one position. Apple's market share was at 28 percent, down slightly from 30 percent in the year-ago quarter, but well above competitors like Huawei, Samsung, and Garmin.

The United States continues to be Apple's largest market, responsible for more than half of the Apple Watch user base. 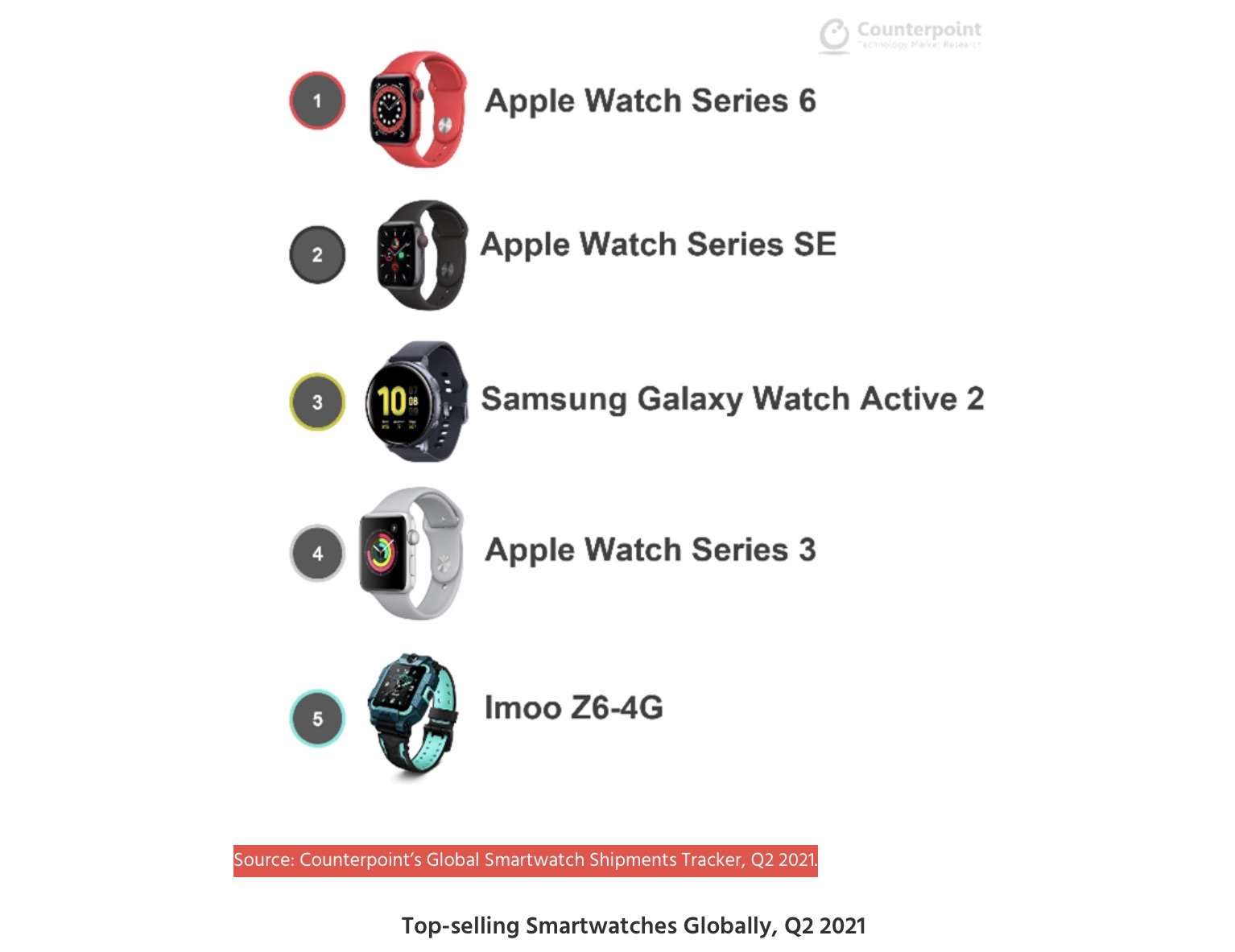 Apple in just a few weeks is set to debut its newest wrist-worn device, the Apple Watch Series 7. The Series 7 will feature the first redesign we've seen in years, with Apple adopting a flat-edged design, a larger display, and new 41mm and 45mm case sizes.

We're expecting Apple to debut the new Apple Watch Series 7 models alongside the iPhone 13 lineup, and we could be hearing details on an event date within the next two weeks.

That's pretty impressive. Such a success!

I Cannot wait for the new Apple Watch to be out next month.
Last edited: Aug 26, 2021
Reactions: SFjohn, FightTheFuture, BvizioN and 3 others
U

I’m guessing since Apple has a monopoly on the Apple watch, it, too, shall soon be deemed “essential”
Reactions: trsblader, bwillwall and pasamio

Where is the competition for the Apple Watch, that is actually good?
Reactions: SurferPup, Jony Ive and Co., FightTheFuture and 2 others

Thankfully, the competition is drunk of the skeuomorphic round-face Kool-Aid.
Reactions: SFjohn

Thank you to apple for doubling down on fitness. It has allowed me to find actual purpose in having one over the years.
Reactions: artfossil, apparatchik, ender78 and 5 others
S

Love my apple watch. It is an excellent smartwatch.
Reactions: TheYayAreaLiving 🎗, SurferPup, SFjohn and 3 others

Perhaps I'm crazy but I much prefer the look of the imaginary watch they used to show the graphs, than the actual Apple watches in the image underneath!
Reactions: mhnd, Agit21 and Commodore 64
J

Loving mine since the S0 and hoping that the S7 will bring some new health sensors so I can upgrade from my S4…
Apple is clearly the leader in this space but the Android folks need some more options too
Reactions: SurferPup, SFjohn, FlyBry and 1 other person
C

That graphic with a ROUND watch looked promising…?
Reactions: SFjohn, mayga1, mhnd and 1 other person
M

I bike a lot and it feels like my day is not complete without my Apple Watch. Might upgrade to 7 from 5. Will try the "boxy" design.
Reactions: mhnd and DelayedGratificationGene

More than 100 million people worldwide, or about 1.25 percent of people around the world.

A lot more room for Apple to grow sales.
Reactions: SFjohn, FightTheFuture and DelayedGratificationGene
B

I'm glad that Apple Watch owners are happy. And more power to 'em. But, for me, not one more device that requires charging. Also, I much prefer my analogue watches - both mechanical and quartz.
Reactions: TracesOfArsenic, RedRage and decypher44

MacRumors said:
In the second quarter of 2021, global smart watch shipments were up 27 percent overall, and Apple was able to maintain its number one position. Apple's market share was at 28 percent, down slightly from 30 percent in the year-ago quarter, but well above competitors like Huawei, Samsung, and Garmin.
Click to expand...

Where does Fitbit fall?

Must be way down the list if they weren't even worth mentioning.
G

I stopped wearing a watch about 10-12 years ago. I'm not quite ready to start again.

Joe_ said:
Where is the competition for the Apple Watch, that is actually good?
Click to expand...

The rise of imoo watch indicates Apple should make a cellular watch designed for kids.

Apple Watch SE with cellular is close, but handicapped for kid's use by few factors:

The SE was a very good move. Stripped away the fancy features and made an affordable "core" model.
Reactions: FightTheFuture, mhnd and subi257

Joe_ said:
Where is the competition for the Apple Watch, that is actually good?
Click to expand...

The only thing better than the current war Apple Watch will be… the Apple Watch series 7
Reactions: FightTheFuture and mhnd

I have an Apple Watch series 5 which I wear every day.

Gym - record workouts
Music - paired with my AirPods, listen to my music collection also at the Gym
Mac - I use it quite often to automatically log into my Mac and also Apple Pay
Time - use it to tell time

Being asked to Breath and Stand all day long.
Battery Life (getting old, barely makes it a day)

Generally I am ok with it as I am a watch wearer and its quite convenient at the gym.

I may buy a new model mainly for any battery life improvements.
Reactions: brgjoe, SurferPup, Ghost31 and 2 others

Imoo? Personally waiting for the Iquack.
Reactions: SurferPup and mhnd
B

Being asked to Breath and Stand all day long.
Click to expand...

You can disable those notifications!
Reactions: Ghost31, SFjohn, istvan and 7 others
A

That's a lot of Watches. Still a lot of room to grow when compared to the number of iPhone units.
Reactions: FightTheFuture and TheYayAreaLiving 🎗
B

The Apple Watch battery replacement cost is quite high out of warranty. Wish it's lower.