According to a new survey, more users trust Amazon and Google to handle their personal user data and internet browsing activity than Apple, while users overwhelmingly distrust Facebook, TikTok, and Instagram. 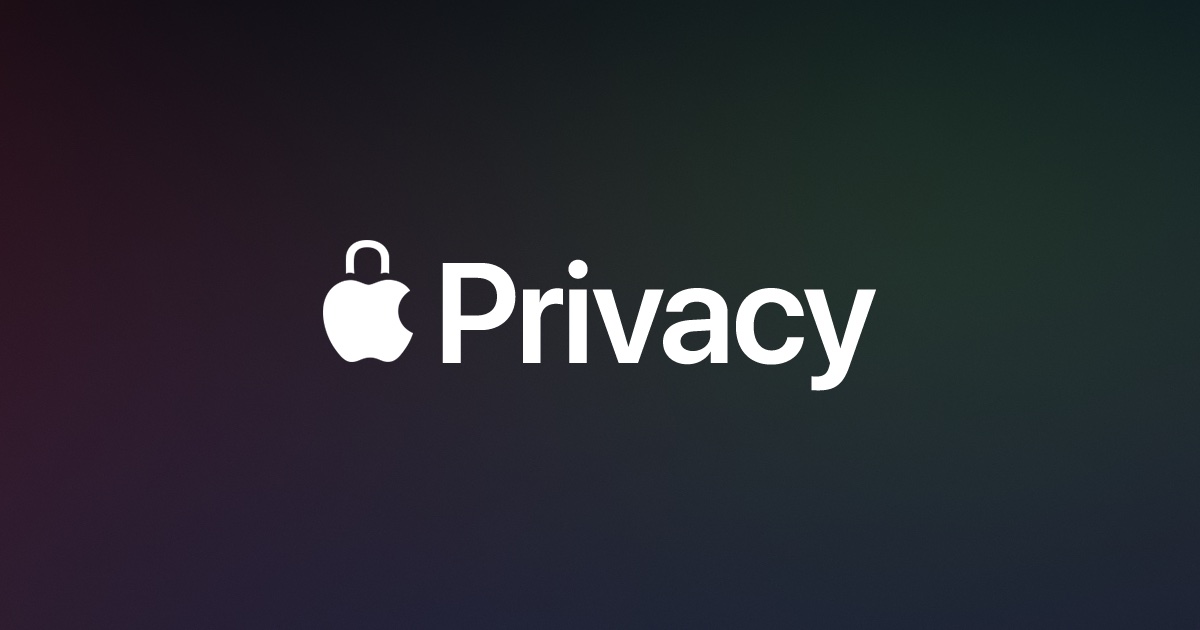 The survey conducted by The Washington Post sampled over 1,000 internet users in the U.S. about how much they trust Facebook, TikTok, Instagram, WhatsApp, YouTube, Google, Microsoft, Apple, and Amazon to "responsibly" handle their user data and browsing activity.

Users were polled on whether they trust the companies and platforms "a great deal," "a good amount," "not much," or "not at all," with users also able to state they had no opinion of a given company.

Among respondents, 18% said they trust Apple "a great deal," while Google and Amazon scored 14%. But in the "a good amount" category, Amazon took the lead with 39%, Google with 34%, and Apple trailing with 26%. Combining the two positive categories, Apple's overall net positive score was 44%, lagging behind Google's 48% and Amazon's 53%. 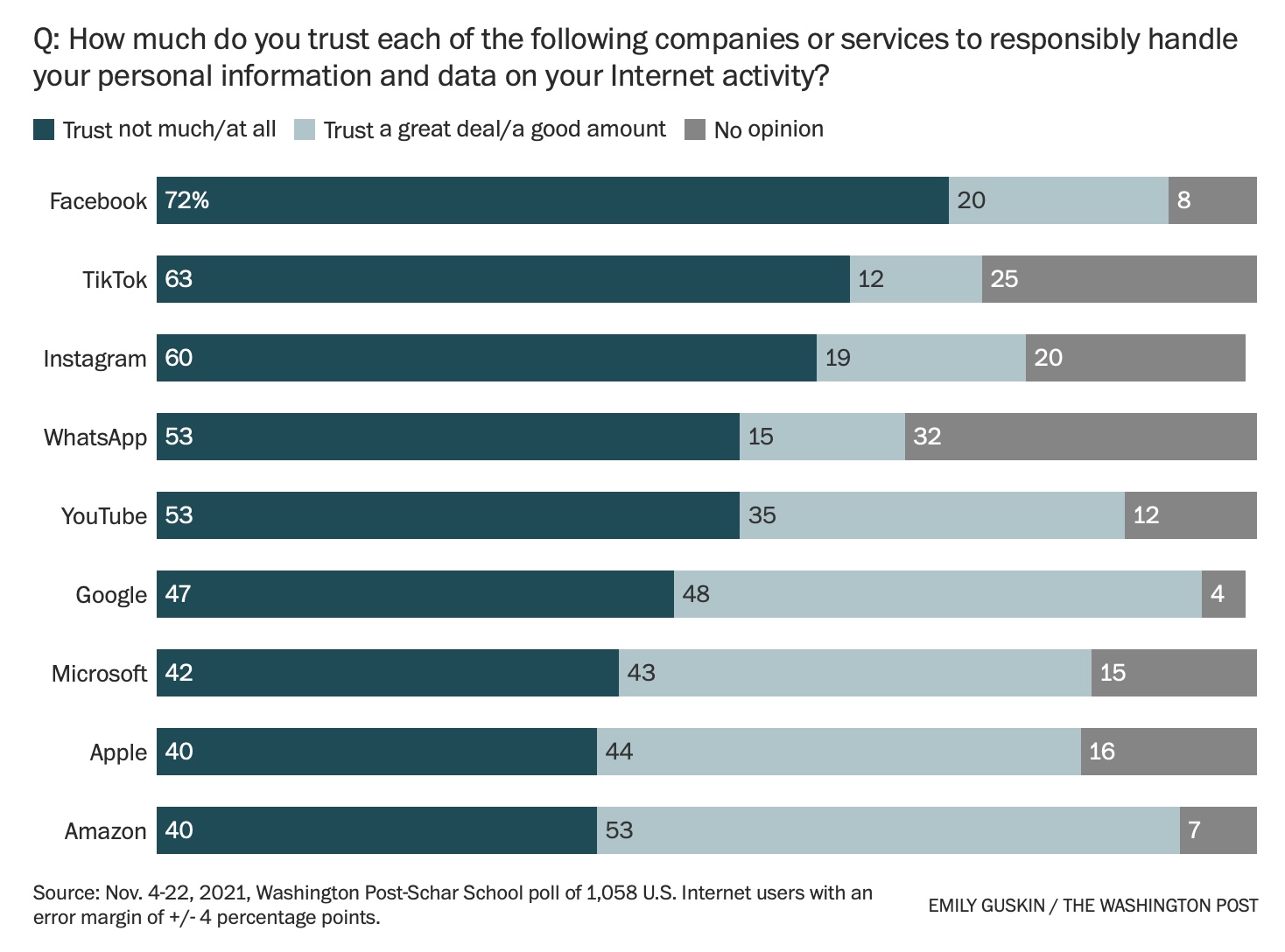 On the negative side, survey data indicated that out of Amazon, Apple, Google, and Microsoft, 40% of those surveyed said they don't trust Facebook at all to handle their user data. Facebook took the crown for being the least trustworthy out of all those listed. A separate survey last week revealed a similar sentiment amongst users, naming Facebook, now known as Meta, as the worst company of 2021.

Apple tied Amazon for the best net negative score at 40%, with Microsoft coming in at 42% and Google at 47%.

Internet users were also asked about targeted online advertising, with 82% saying they find targeted online ads annoying, 74% finding them invasive, and only 27% finding them helpful. One of Apple's most controversial and talked-about privacy measures introduced in recent years is App Tracking Transparency, which indirectly aims to limit the annoying and invasive ads seemingly disliked by most users.

App Tracking Transparency (ATT) requires apps to ask for users' consent before tracking them across other apps and websites. For users opted out of the tracking, apps and data brokers such as Facebook have fewer data points to show users targeted advertising online. Facebook has lobbied against ATT, calling it harmful to small businesses that rely on ads to keep afloat.

Well, more fool them then lol
Reactions: Kastellen, Sikh, 1bcoolrob and 36 others

Hard evidence users have no clue about their privacy.
Reactions: travisjaymoore, Kastellen, Sikh and 161 others
A

It's good to see it visualized this way. The No opinion category is what put Apple behind Amazon which means not enough people know how massively intrusive Amazon is and how massively privacy conscious Apple is by comparison.

A few journalists have blocked traffic to Amazon's IP block on their computer and found the internet is basically not usable. This isn't a privacy violation in itself but it shows how much control Amazon has on the global internet.

Surprising result.
Reactions: DeepIn2U, Vasilioskn, Jimmy James and 14 others
A

I don't trust any of them. Apple has ruined their privacy high ground. At least FB and Amazon didn't parade around holier then though about it.
Reactions: russell_314, Surne, Kastellen and 104 others

Ah, yes. Trust the company that makes its money by selling your data. Makes perfect sense!
Reactions: tranceme, DeepIn2U, Average Pro and 72 others

The survey shows there a lot of dumb and ignorant tech users.
Reactions: CheesegraterMac, tranceme, Kastellen and 84 others
A

It's relatively close and somewhat meaningless without the overlay of primary device within the data sample. If there are more Android users for example, they are more likely to trust Google.
Reactions: bevel, G5isAlive, Janschi and 26 others
B

Ever watch a dystopian future movie and wonder how people would ever let it get to that point?
Reactions: xpaulso, jagooch, Onexy and 34 others

That is surprising - I would trust Apple any day, with all they do for privacy, their priority is hardware, and not services, where as ALL of the others primary is services - so their insentient to use your private data is 100 fold bigger than Apples.

We all know (or shoud know) that nothing is free, so every time you use a product that you did not pay for, you are paying more than you can imagine.

did you pay for your iphone - yes = I trust them
did you pay for gmail, google.com, whatsapp, instagram, tiktok ...... - NO = they will find ways to sell my data and my soul
Reactions: Sikh, sinoka56, Average Pro and 35 others

Google and Amazon over Apple? Seriously? As George Carlin used to say, "never underestimate the power of stupid people in large groups."
Reactions: scoobs031, Sikh, 1bcoolrob and 53 others

Considering the amount of people that get their news from Facebook, is this surprising to anyone?
Reactions: Sikh, Average Pro, jagooch and 19 others
U

I don’t think it gets much more clickbaity than this
Reactions: CheesegraterMac, Sikh, jbc25 and 23 others
D

I read it that way: people see data companies as pretty good at managing data, their raison d'etre.

Has Apple every been a data company at core? Maybe not, maybe not yet.
Reactions: jbc25, thejadedmonkey and antiprotest
E

Maybe because most people realize that Tim Cook is not trustworty. Talking equality and access for everyone in the US and doing deals with the CCP in China at the same time is not very confincing.
Reactions: djstile, lugworm, jinnyman and 21 others
U

So, given the margin of error, statistically identical.
Reactions: MacCheetah3, zapmymac, Apple fan from Korea and 13 others
C

The NO Opinion numbers are large for some, & IMO, skews the results.
Reactions: FelixDerKater, mzeb, V.K. and 3 others

Personally identifiable data? I think not.

it shows Google and Amazon targeted Ads are working. lol. They are able to fool their users.
Reactions: jagooch, nt5672, mr_jomo and 8 others

Just laughed my ass off.
Reactions: 1bcoolrob, jagooch, SFjohn and 1 other person
3

This should be the Onion article.
Last edited: Dec 22, 2021
Reactions: BlueParadox, jagooch, TheSkywalker77 and 8 others
H

aplnub said:
I don't trust any of them. Apple has ruined their privacy high ground. At least FB and Amazon didn't parade around holier then though about it.
Click to expand...

Exactly this.
They've tried stuff and had to backpedal, (what a way for experts to read peoples privacy wants in the wrong way). They've tried a few things and been caught, (and then greased their way out of it).
They have shown they are dishonest when it suits them - why do people think that virtue signalling means that they must be 100% privacy focused.
I'm still surprised that facebook is so high up though.
Reactions: Surne, sinoka56, jinnyman and 20 others