Nintendo's First Smartphone Game Due This Year, 5 Planned by March 2017

In Nintendo's financial results briefing posted today, which relays the company's past fiscal year ending in March 2015 and looks ahead to the future, Nintendo president Satoru Iwata provided a few more details regarding the company's future release plans with mobile gaming partner DeNA. 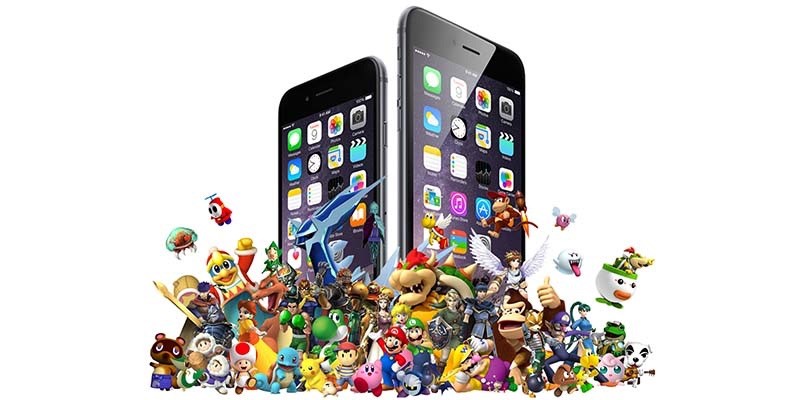 Essentially, the first game in the lineup will launch "by the end of this calendar year," with the current long-term plan to release five games in total by the end of the company's next fiscal year ending in March of 2017, just under two years away. Iwata promises that while that estimation for a release schedule seems low, the company hopes to retain its well-known degree of polish and customer satisfaction when transitioning to mobile, and taking a quality over quantity approach is its way of doing that.

You may think it is a small number, but when we aim to make each title a hit, and because we want to thoroughly operate every one of them for a significant amount of time after their releases, this is not a small number at all and should demonstrate our serious commitment to the smart device business.
Click to expand...

During the briefing, Iwata also went further into detail regarding the actual strategy for creating games on a mobile device, such as an iPhone and iPad. While the initial announcement of the deal with DeNA had fans excited, Nintendo was quick to specify that the experiences provided on mobile wouldn't simply be ports of existing franchises and would be more tailored for a smaller, bite-sized experience. 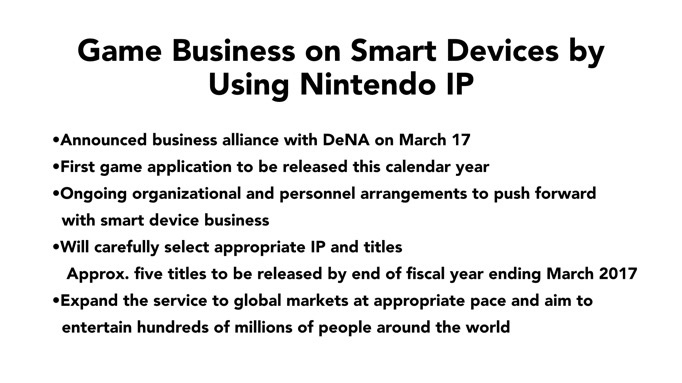 Although that dashed most fan hopes for full-fledged Pokemon, The Legend of Zelda, and Animal Crossing experiences on the iPhone, it does provide hope that the sometimes fumbling company is at least aware of what makes mobile games work in the first place.

As we confirmed on March 17, all of our IP can be considered for a smart device game. On the other hand, since the game business on smart devices is already severely competitive, even with highly popular IP, the odds of success are quite low if consumers cannot appreciate the quality of a game.

Also, if we were simply to port software that already has a track record on a dedicated game system, it would not match the play styles of smart devices, and the appropriate business models are different between the two, so we would not anticipate a great result. If we did not aim to achieve a significant result, it would be meaningless for us to do it at all. Accordingly, we are going to carefully select appropriate IP and titles for our smart device deployment.
Click to expand...

Iwata last mentions the company's hope to "expand this business," in regards to the mobile games, to global markets so more and more fans will have a chance to experience Nintendo games on mobile. "We are aiming to make this one of the pillars of Nintendo's revenue structure," Iwata said.

Since the deal with DeNA, the company has begun slowly relinquishing its stranglehold over its precious characters and IPs, after first being burned by various motion picture and CD-i partnerships in the past. Most recently, this week Nintendo announced a partnership with Universal to include the former company's popular characters as various attractions and locations in a theme park expansion of the latter's well-established park experiences.

and here comes to...

"Just release the mario and zelda for $1 each and you'll make millions!" comments.

I hope it's genuinely a good game. Pls Iwata

Sega? is that you?
T

It would be interesting to see how games like Super Mario Bros would work on iPhone, when it's touched base.

Also, it will be interesting to see if these games launch on Android, too.

Just release the mario and zelda for $1 each and you'll make millions!

Man..just release the mario and zelda for $1 each and you'll make millions!
M

This could parallel what happened with the NES. It sparked a revival of the console industry after the market crash in 1983.

Not saying mobile games are suffering a similar fate but maybe they will come up with some new touch interface paradigms for games.

And maybe they will start using capacitive touch for their own hardware! (prob not lol).

There's no way they are making shovel ware/pay to play games. This is NINTENDO guys~!
0

These will be $10 games that feature the likeness of Nintendos famous characters, but the games will probably have 5-10% of the content a console game would have. Nintendo are some greedy MF'ers.
B

If they would just take the mini game collection that they put on some of the Mario DS carts and release it in the App Store for like $3 or so, I would gobble that up.
C

Considering our family Wii sits collecting dust while the iPads are used constantly, I think this is awesome. Big time nostalgia. I can't imagine how much sleep I missed at a young age due to playing so much Nintendo.

Reminded me of this small write-up I saw a couple of years ago:
Five Reasons Nintendo Will Never Develop for the iPhone

I'd test the waters of Nintendo games on my iPad/phone.

Guess I can stop using the mame emulators

Well, I can see games like Fire Emblem working on the iPhone's touch screen. My body is ready.
R

I sincerely hope these aren't freemium games with in-app purchasing. I'd gladly pay $10-$20+ for a quality game that's not nickel & diming me every time I play.
X

I just hope that those games also support MFI controller. That way I can have an iPhone mirrored to tv via Apple TV or Digital AV Adapter and play with a controller.
0

damn..just release the mario and zelda for $1 each and you'll make millions!
W

Another future option would be to use the Iphone / Ipad as peripherals to a WiiU, with exclusive content for the Apple products. The WiiU is an under selling system, but it is still a damn cool idea. I ended up getting one just because of how much damn fun it is. The concept is original IMO as well and pretty well executed.

I still think they should release IOS only options like what is being spoken about here.....but they could have this option as well.

I just hope we can get SOME kind of quality Zelda game. I grew up with that franchise and I would love to see it expanded to my iPhone 6 Plus' screen with the use of an emulator.

I also wouldn't mind seeing a Metroid game of some sort. FPS or good old side-scrolling, I don't care which.

5 in the next 2 years. Blistering pace.

The best thing about Nintendo is that they'll take advantage of the system. Best Wii games were from Nintendo, same with the U. These will be amazing.

I have gone back to my Game Boy Micro for mobile gaming. I just can not get into it on my phone.