iPhone Notes from syncing has weird font and formatting

I created an Exchange account on my iPhone SE and sync'd notes with my Windows PC. On the PC, AkrutoSync acted as the Exchange server.

The odd thing is that even though notes created on the iPhone have the default font (looks like Helvetica or Arial), the notes that sync'd with Exchange server have a font that looks like Times. Furthermore, there is paragraph level formatting in that each new line has liberal amounts of (wasted) space preceding it. Not all lines have this spacing.

I tend lean toward the conjecture that Exchange server notes do not support formatting, as I've never seen notes with formatting before. At least on my Windows machine, there is no way to apply formats to text within notes.

Can anyone shed some light onto what goes on during the synching notes with an Exchange server, and more importantly, how to get rid of the formatting that plagues the notes in iOS?

I don't know if this provides a hint as to possible causes, but I find that if the text of a note contains multibyte characters (http://://en.wikipedia.org/wiki/UTF-8) then the iOS note takes on the (apparent) Arial/Helvetica-ish system default font. If there is not even one character that is multibyte, then the iOS note takes on the hard-to-read Times-ish font. So far, the unwanted vertical spacing occurs in the latter.

One might presume that the former is preferred, but in fact, they come with an even bigger problem -- all the new-lines seem to be missing. Unreadable. So I went through all the notes in Outlook on the PC and replaced multibyte characters with single-byte approximations. For example, the bullet symbol was replaced by asterisks. It's a bit tricky because some of the multibyte characters are hard to find, e.g., even a space mutlibyte (it's obviously some variation of the single-byte space that we all know and love). Other multibyte characters were vowels with accents -- I replaced them with their unaccented versions.

Anyways, this makes the notes readable, but the Times-ish microfont and the haphazard verticaal spacing is far from ideal. Thanks for any suggestions as to a better solution.
I

Slide 1 shows a typical note that looks normal on Outlook but displays on the iPhone with Times-ish microfont: 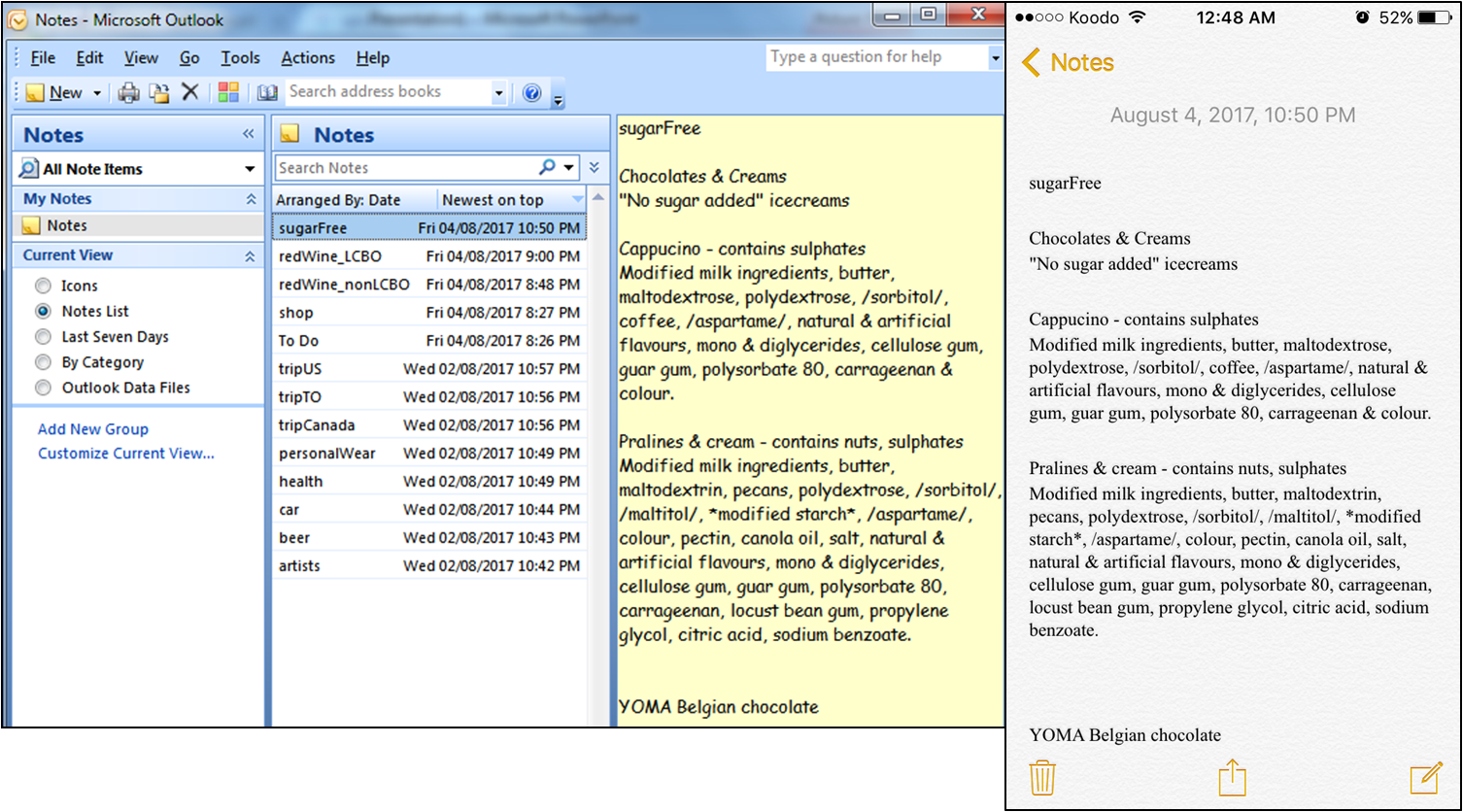 Slide 2 shows what happens when I add a single multibyte character to the text. The only difference from slide 1 is the bullet symbol. Notice how the font is right (the system font, sans serif), but none of the newlines are displayed: 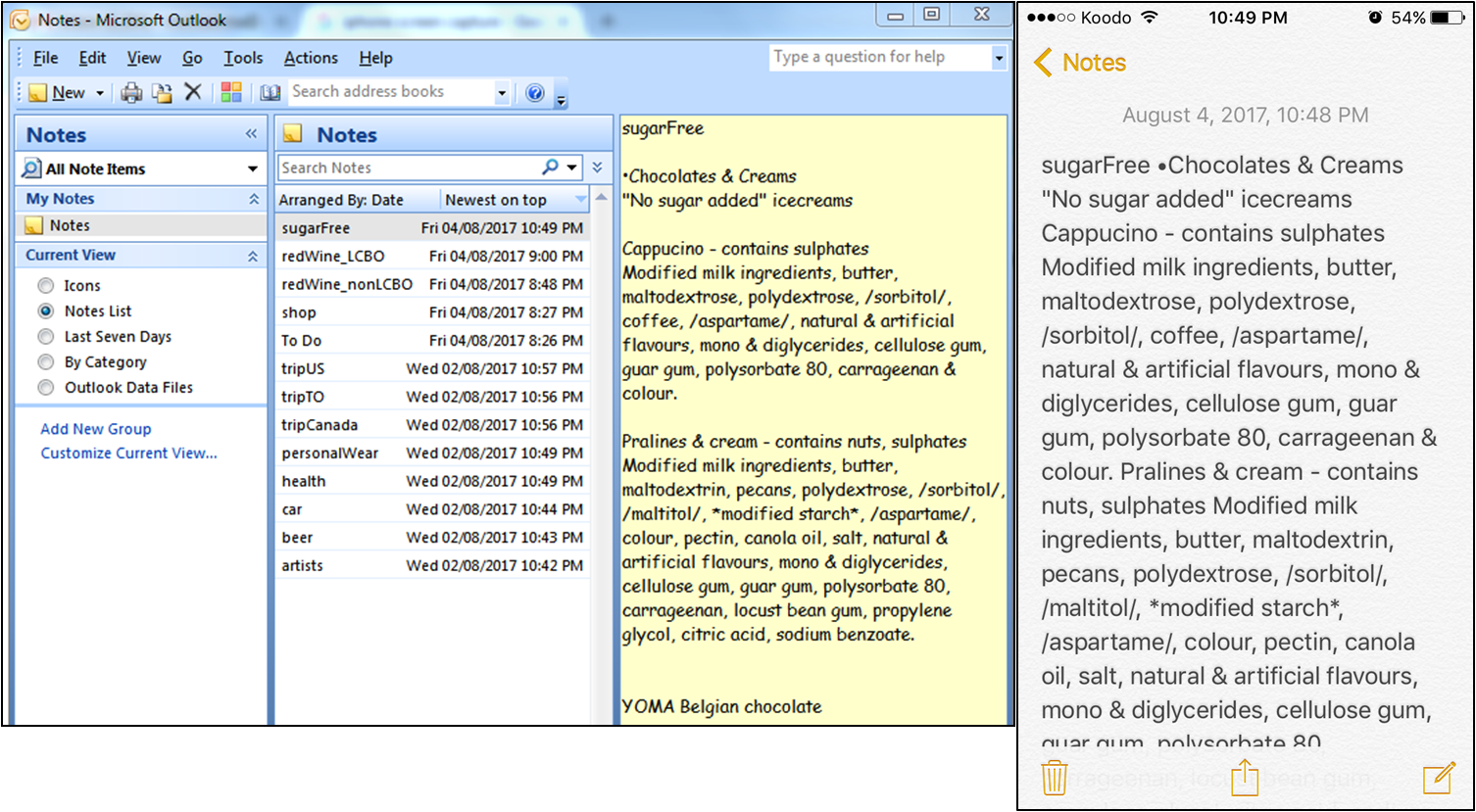 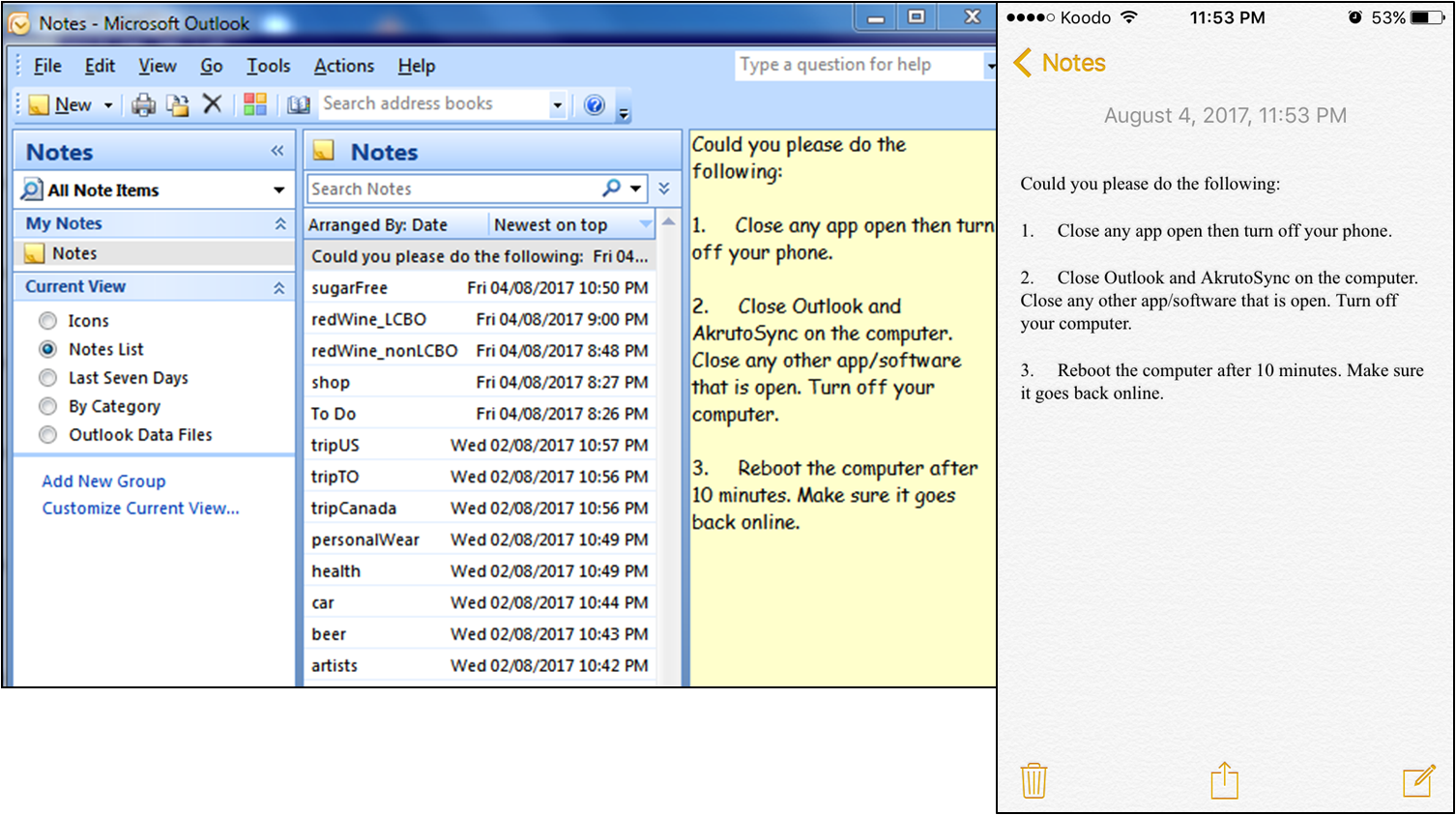 Slide 4 shows what an uncorrupted note created on the iPhone looks like. It has the system font (sans serif) and newlines are displayed: 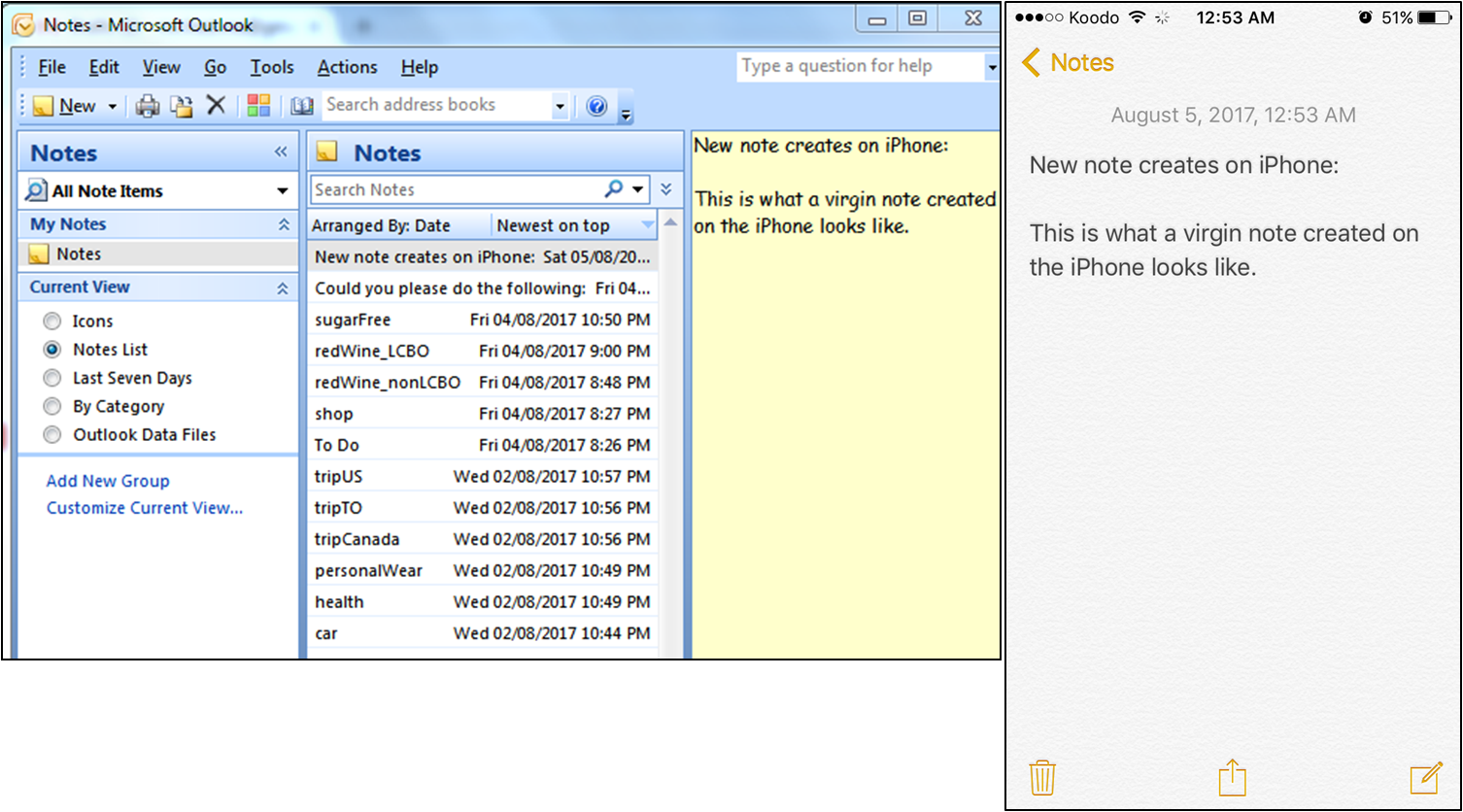 I mentioned that there was sporadic extra vertical spacing in some notes. I can no longer find an example, and I strongly suspect that the erratic spacing was the result of some of the other multibyte characters that I mentioned.

If a note is a text-only object, then no notes should have any formatting. The note should have no font attribute, and the font in which the note is displayed should be determined strictly by the app or host system, not on the basis of individual notes (as seems to be the case here). Yet somehow, the notes for which updates propagate from Outlook to the iPhone *are* taking on individual, non-standard fonts. The presence of a multibyte character in the note seems to force the Notes app to use the standard font, but also causes the newlines to be not displayed.

I don't expect the iPhone to display notes with the same font as Outlook, but neither should it start selectively displaying some notes with a nonstandard font (which unfortunately has poor legibility) and other notes without newlines.

AkrutoSync has clarified that their syncing is text-based only, so their syncing is not responsible for the inconsistent manner in which notes are displayed. It makes me wonder whether the Notes app exhibits this same bizzare behaviour when syncing with other Exchange servers.
Last edited: Aug 4, 2017

Thanks for the screen shots and careful write up! While it doesn't fix the problem it does define it well when I talk to others. In regards to your question.


iPodTouchOwner said:
AkrutoSync has clarified that their syncing is text-based only, so their syncing is not responsible for the inconsistent manner in which notes are displayed. It makes me wonder whether the Notes app exhibits this same bizzare behaviour when syncing with other Exchange servers.
Click to expand...

I don't use AkrutoSync and see the exact same issue connecting to my work Exchange server.
I

Thanks. It's good to know of one more piece of info. It looks like it's common to the Exchange Server protocol or default behaviour. I have one further piece of info, and I'm not sure how much more light it sheds. Here is an image of AkrutoSync's logged transaction with the phone -- in particular, a test memo that I created in Outlook, which got sent out to the phone. It has HTML tags, meaning that it's not just the simple text that gets sent. I'd be surprised if AkrutoSync went out of its way to add the tags for no reason. So perhaps it's using some export functions of the Outlook. However, since you also see it with a bonafide Exchange Server, perhaps Exchange Server has some export functions that embellish the simple text with the extra "intelligence" in the form of HTML tags. I'm not familiar with the Outlook/Exchange world, but is it possible that Microsoft makes some export packaging libraries available, which AkrutoSync uses in exporting from Outlook? 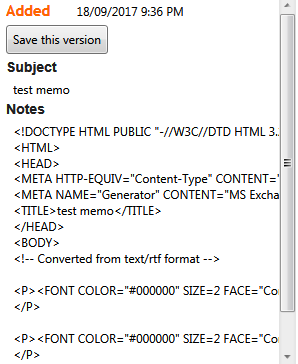 A
iPad Tot app not syncing

May 25, 2020
Alwis
A
H
Universal RSS reader with iCloud sync

Feb 21, 2020
nicho
N
A
iPad looking for a NAS with automatic backup/sync with ipadOS