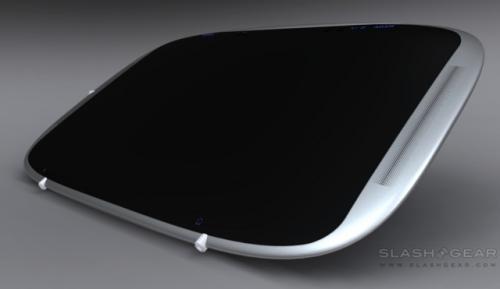 Rendering of Unreleased Notion Ink Tablet
It seems 2010 is going to be the year of the tablet with or without Apple. While Apple is rumored to be pursuing the market later in the year, other consumer electronic companies aren't going to wait and see. A number of non-Apple tablet announcements are expected at CES this year with Notion Ink's announcement arriving a bit prematurely.

Details of Notion Ink's "Smartpad" tablet was released by Slashgear today and carries an impressive spec sheet. The 10.1" sized device also is one of the first to use Pixel Qi's 3qi screen we detailed as a possible candidate for the Apple tablet. The specs for the unreleased device can give you an idea of what might be possible in an upcoming Apple tablet:

No price was given, and the system appears to be based on the NVIDIA Tegra T20 chipset. The Pixel Qi display which we detailed in the past is said to offer significant power savings to these portable devices as well as clear viewing in sunlight.

Apple is rumored to be bringing a tablet of roughly the same size to market later in 2010. Apple's version is expected to be based on the iPhone operating system.

What exactly will this do that a netbook can't???
Comment
J

The android os is absolutely amazing. Cant wait to see this
Comment

DipDog3 said:
What exactly will this do that a netbook can't???
Click to expand...

The same thing the Apple tablet will do (ie, not much).
Comment

Wow...this could be pretty cool to utilize. I'd like to get one of these in hands to get a sense of size...
Comment
E

What exactly will this do that a netbook can't???
Click to expand...

I was thinking the same thing. Other than the "cool" factor, this doesn't seem very appetizing. I just don't see the point of having a watered-down computer just to be able to navigate it from the screen. I'd rather have a MacBook Pro . . .

Just not for me I guess! But it definitely looks pretty cool.
Comment

Sweet!!! I hope this is good enough to keep me satisfied until Apple releases their Tablet next year.
Comment

"Apple is rumored to be bringing a tablet of roughly the same size to market later in 2010."

They should have already announced release for January 2010. How long have they been working on the device? Only 7+ years.
Comment
H

Have some faith. Demoing something at CES doesn't mean it is ready for production ( nor does it mean it will ever hit production )


Also the spec sheet here lists like a dream world... Notice the pictures of the display ( not the mockup ) are just the stanrdard Pixel Qi screen. They didn't actually demo this tablet itself, just talked about it.

I seriously doubt this will be ready for production in 2010.
Comment
U

That is gorgeous. Apple better get their butt in gear or I'll be buying this one instead.
Comment

How many years after cell phones were out before Apple released the iPhone? This Apple its never too late...
Comment
U

KristenM said:
That is gorgeous. Apple better get their butt in gear or I'll be buying this one instead.
Click to expand...

Lesser Evets said:
How long have they been rumored to be working on the device? Only 7+ years.
Click to expand...

Fixed that for you.


huntercr said:
Have some faith. Demoing something at CES doesn't mean it is ready for production ( nor does it mean it will ever hit production )
Click to expand...

Except for the fact that there are dozens of tablets already on the market. Guess why you never see anyone around with them.
Comment

When Apple jumps in, they jump in big and leapfrog the competition. They didn't have the first MP3 player or smartphone, either, but they sure managed to make a splash, didn't they?
Comment

TheSlush said:
When Apple jumps in, they jump in big and leapfrog the competition. They didn't have the first MP3 player or smartphone, either, but they sure managed to make a splash, didn't they?
Click to expand...

Except both those markets were already big hits in and of themselves. They entered markets where there were tons of opportunity. The problem with tablets is that... well.. they don't sell well and aren't very popular. If Apple does make a tablet, it will have to really be something to fit in that niche between a laptop and a PMP while being better than a netbook.
Comment

Does anyone know what that is?
Click to expand...

Possibly a more iPhone-like sleep mode (so the iPhone goes quite a while in standby but wakes up much more quickly than a notebook does). That would be nice....

they have waited just long enough. The battery tec just wasn't there up until now (latest macbooks and pros), the screen tec wasn't there either, the cpu wasn't there (pa semi) to allow for effective power management above all, and of course the ssd/flash storage had neither the speed nor the capacity for a tablet to be used, it's all coming together now, and by that I mean just right now - and the iphone platform had not matured enough.

And even this tablet (which leaves a lot to be desired in terms of design, something like an oversized magic mouse) won't be powerful enough to match apple's custom cpu and their superior (because of their market leadership position in buying these things) ssd or flash storage. And of course there's the interface too, where no one arguably has put more thought to that than apple.


KnightWRX said:
The same thing the Apple tablet will do (ie, not much).
Click to expand...

You obviously don't get tablets at all. And that's ok, not everyone gets a new tec revolution, that's why apple is single (almost) in consumer innovation, that's why 99.999% don't get it, and 0.001% have the vision.

It's their form factor, the book form that introduces the real revolution (let alone that a "netbook" with an atom is joke of a machine) here, no way to hold a netbook like a newspaper or magazine or book and read it.
Comment

What exactly will this do that a netbook can't???
Click to expand...

48 hours in standby mode for a device this large? Wow, that's horrible. Can't even make it through a weekend trip, even if you never use it.

And how scalable is Android OS? I think the challenge for Apple will be to scale the iPhone OS to a much larger (and different) device than the iPhone. As it is, the iPhone OS won't work very well on a tablet, and neither would desktop OS X. The foundation of the iPhone OS is very good though, and I think Apple's strength in software engineering is going to (again) put them ahead here. All these other manufacturers are trying to either shrink down a desktop OS or scale up a phone OS into these intermediate devices and the results have been horrendous.
Comment
You must log in or register to reply here.
Share:
Facebook Twitter Reddit Email Share Link
Register on MacRumors! This sidebar will go away, and you'll see fewer ads.
Sign Up
Top Bottom