CultofMac profiles one case manufacturer who remains confident in the tapered iPhone 5 design that has been circulating for months.

Hard Candy is in the process of manufacturing 50,000 of these cases and sending them to stores. The company based their cases on dimensions received by three different sources.

What stood out to us, however, was that their dimensions seem very different than the ones from other case manufacturers. The specs from Hard Candy include:

- Large 4.44-inch screen.
- It is significantly bigger than the iPhone 4, but the case tapers, making it feel a lot thinner.
- Large, lozenge-shaped Home button (This is rumored to be integrated with new Assistant function, allowing tasks to be controlled by voice).
Click to expand...

While the general shape is identical to the other tapered designs, Hard Candy's cases fit an iPhone with a 4.44-inch screen. This is notably larger than the other cases that we've seen. 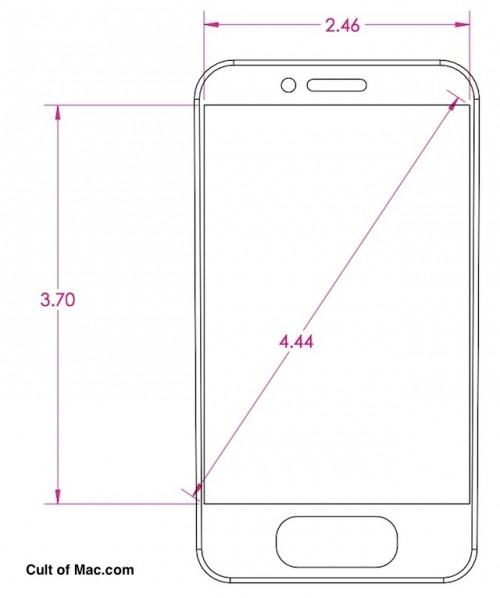 We're not sure why there is such a discrepancy, but at least some of these early cases are going to be wrong, if not all of them.

There's been some ongoing debate about whether or not Apple will release an iPhone 4-liked design or a new tapered design as shown above. Apple is holding their media event at 10 a.m. Pacific / 1 p.m. Eastern on October 4th, so we'll find out soon enough.

Isn't iPhone6 already out? What is this iPhone5?

Wait... Maybe this'll be the lineup:

I'm still confident of an iPhone 5. Thumbs up if you are too!

I'd love to see this, but I'm still not counting on it. I hope Apple proves me wrong!

I have butterflies in my stomach!

Wow, the screen on that one is a monster. Would Apple really go that big? I'm not even sure if I want one that big. I was thinking more around 4", but if I had to choose between this and a 3.5", I'd definitely pick this. Even if it cost $100 more.

I'm inclined to believe Hard Candy Cases as they're one of the better case makers out there. Especially if they have three sources. That's a lot of money to throw around.

So when they say tapered, do they mean tapered in the sense of an iPad 2 (which would be great) or do they mean the teardrop shape, which I've never held much stock in? I'm hoping for the tapered edges only. And if Apple goes this big, does that mean 720p display to keep it retina? And additional features, beyond Assistant, that could take advantage of such a monster screen? Some iPad gestures might even be useable on such a large screen. Here's to tomorrow! Whatever it brings, it will be new and shiny.
S

macduke said:
So when they say tapered, do they mean tapered in the sense of an iPad 2 (which would be great) or do they mean the teardrop shape, which I've never held much stock in? I'm hoping for the tapered edges only.
Click to expand...

According to the drawings posted by CoM, it'll be both.

I think, unfortunately, that this pretty much rules out the iPhone 5. Too many differing designs, no leaks or other evidence...
I predict iPhone 4S only (not counting a cheaper iPhone 4).

I'm so nervous, I'm not sure if more but differing iPhone 5 cases is a good or bad thing, I'm hoping it means we're getting one! and if the screen is that size (can't see it happening) I would love it!
D

Go poop them out lol (playing)

It's for the new iPod touch!
M

I'm currently a 3G'er and i'm a big fan of the iPhone 4 design and initally all I wanted was a bumped up iPhone 4 spec for the up and coming iPhone 4s/5.

BUT with all these rumours over the past few months i'm suddenly having a feeling that I'm going to be disaapointed if we DON'T see a re-design....

That shape is not a 'lozenge'. Look up the definition (a lozenge is diamond shaped).
A

No need for nerves. We can't change anything. Apple will reveal what they do. My information says there is an iPhone 5. No info on screen dimension. 4.44" does seem a little large and goes beyond most best guesses. However, Hard Candy are a good quality outfit and are unlikely to be flushing money down the toilet for no reason.

It will be the 3GSSS

It's for the new iPod touch!
Click to expand...

yes cuz they'd make the lil bro better than the iPhone ...
B

Why "notably larger"? Were the Case-mate cases ever measured? Aren't these measurements fairly consistent with the 3rd party case that MR obtained on September 3rd and measured with calipers at 4.7"x2.6" and with an implied screen size of 4" if the margins were the same as for iPhone 4 but >4" if the margins were reduced (i.e. in an edge-to-edge display)?

MR's alternative (smaller) dimensions used for its mock-up were determined by using the 30-pin dock as a reference from the leaked design drawings. I would have thought that this method is more prone to inaccuracy.

But clearly, even if all the new form factor cases ARE consistent in size, there is not a shred of evidence that the design is for the iPhone 5 or that we will be seeing it today.
A

Absence of evidence is not, er, evidence of absence.

Heh, before purchasing something that big, I think I'd need to check how it'd feel in my pocket when sitting down at some Apple store first.
A

Shrink this down to size and all of the dimensions overly pretty much exactly (and more precisely than the other teardrop cases) with the iPhone icon found in the iPhoto beta a few weeks ago. Gives one hope. Can't wait for the keynote.
A

Guess they're doing it just in case?

Gav2k said:
It's for the new iPod touch!
Click to expand...