The stream of the Euro 2020 soccer semi-final, one of the UK's most-watched TV moments in recent times, was yesterday hindered by frustrating technical issues for Apple TV users. 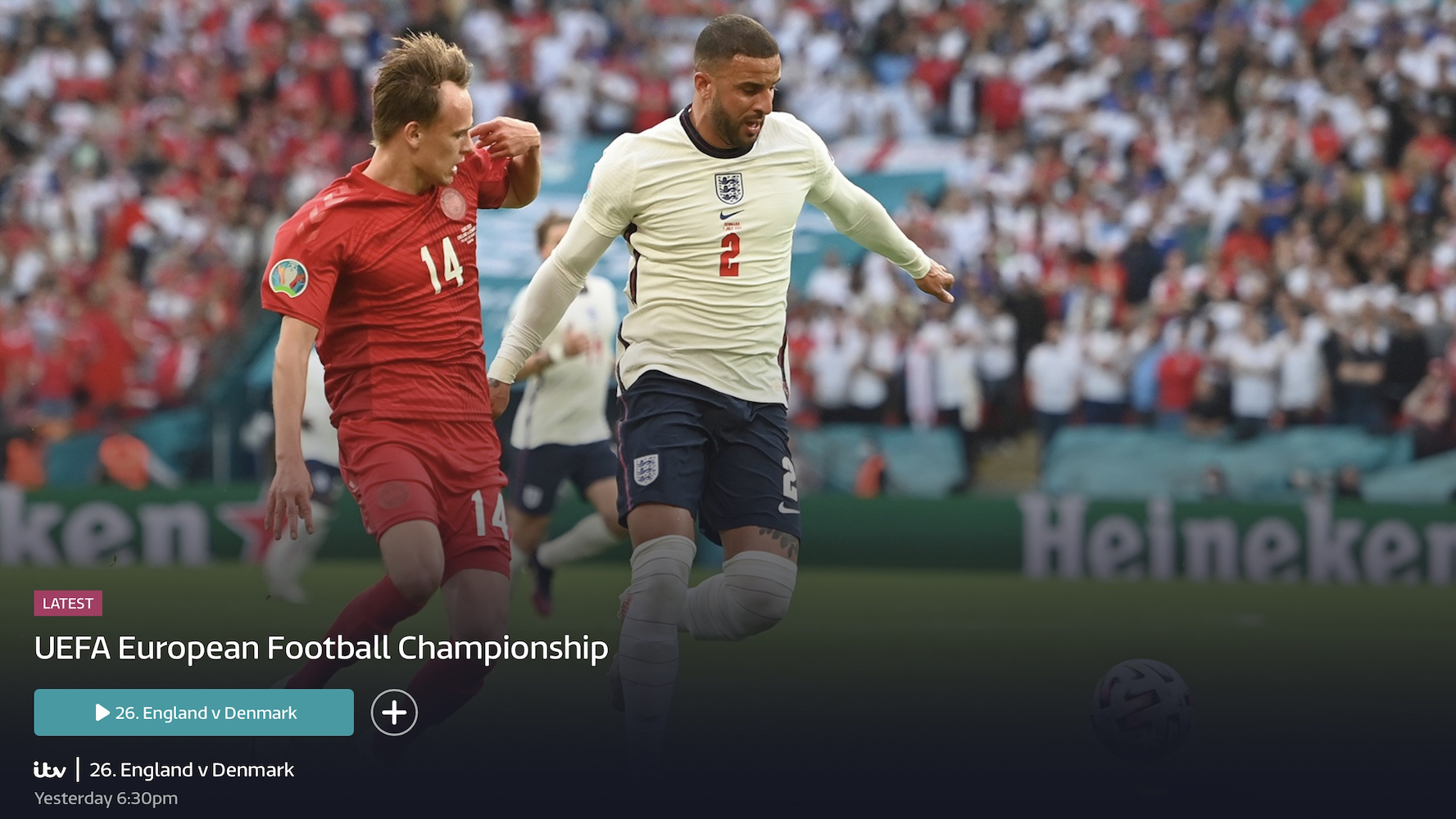 The technical problems, first reported on by iMore, affected viewers using the ITV Hub app for the Apple TV. According to ITV, the match was watched by as many as 27.6 million people, making it one of the most-watched moments in the UK since the London 2012 Olympics.

Portions of the tense second half of the match between England and Denmark were unwatchable on the Apple TV due to a problem that repeatedly kicked viewers out of the stream. Upon attempting to reconnect, the app played a number of ads before resuming and being kicked out again.

ITV was the only way for UK viewers to watch the game, which likely resulted in unusually large numbers of people trying to join the stream via ITV Hub. Nevertheless, streaming from ITV Hub on other devices appeared to be unaffected. ITV has since apologized to viewers over the experience.

The historic Euro 2020 final between England and Italy will be streamed via both BBC iPlayer and ITV Hub in the UK on Sunday, which should reduce the load on the stream, and at least provide viewers with an alternative if one of them suffers from issues. England fans will nevertheless have had reason to celebrate yesterday in spite of the problems with ITV Hub.

Article Link: One of the UK's Most-Watched TV Moments Marred by Technical Issues on Apple TV

Yep this was a pain, ended up watching it on my iPad...

Honestly BBC is superior, so I was very disappointed to see ITV was covering the game. Luckily the final is covered on BBC, for UHD goodness.
Last edited: Jul 8, 2021
Reactions: lilatheestallion, twistedpixel8, vmistery and 5 others
Comment
V

For me the ITV Hub App was crashing after every 1 to 2 min. I couldn't watch the game on Apple TV and started watching on live TV instead. Not sure the issue was with Apple TV or the ITV Hub App. Very bad experience.
Reactions: Agit21
Comment
V

LiE_ said:
Yep this was a pain, ended up watching it on my iPad...

Honestly BBC is superior, so I was very disappointed to see ITV was cover the game. Luckily the final is covered on BBC, for UHD goodness.
Click to expand...

I believe the Final is also with ITV not BBC but yeah BBC UHD is AMAZING!!!!
I don't think you can watch UHD via Apple TV iPlayer app though... you have to use your TV iPlayer app instead.
Reactions: Agit21 and George Dawes
Comment

This affected us too. We had to watch on standard def. on ITV1. Rubbish!
Reactions: Agit21
Comment

Final is on both BBC and ITV. BBC will attract vast majority (80% usually)
Reactions: Lukkee24, Agit21, Dunk the Lunk and 8 others
Comment
C

Could have just watch it on the normal telly.. Or in the pub like everyone else 😂
Reactions: alex00100, CarpalMac, decypher44 and 6 others
Comment

It's coming Homekit!
Reactions: SirAnthonyHopkins, Lukkee24, Demonknight and 23 others
Comment

cupcakes2000 said:
Could have just watch it on the normal telly.. Or in the pub like everyone else 😂
Click to expand...

The true Apple man with tidy beard forces himself to watch everything through all Apple devices.
Last edited: Jul 8, 2021
Reactions: Seanm87, Lukkee24, istvan and 17 others
Comment

this was the second game that ITV have messed up, one last week (I think) was stuck on a loop and then last night the app was just crashing every minute. I’d actually paid for the Hub+ subscription (now cancelled) so at least I didn’t have to watch the ads!

I ended up downloading the STV app to watch the same stream, and that app worked perfectly
Reactions: itsandi and George Dawes
Comment
S

BBC iPlayer on Sunday for me.
Reactions: Agit21, MrFootery, itsandi and 2 others
Comment

Can someone advise me whether the iPlayer app on Apple TV supports the UHD streams (it doesn't seem to be on BBC's supported list for the 4K broadcasts) - thanks.
Comment

Sounds similar to the issues I’m having with the History channel app here in the States. An absolute garbage of an app. It takes longer to watch an episode of something on Apple TV than it does on cable. Relentless ads and continuous lockups. There’s a ton of complaints on the App Store about the app so I‘m not the only one. Can’t believe the History channel won’t fix it.
Reactions: George Dawes and jhwalker
Comment
P

Macrumors journalism at its best, it was the app... not the Apple TV
Reactions: Colonel Blimp, secretbum, purplehaze0 and 14 others
Comment

Yep. Very frustrating. I watched the first half on ITV Hub app on my tv but had to give up at the start of the second half and watch it on my iPad.

Originally thought it might have been something to do with running the tvOS 15 beta on my tv but having read this article it seems like it was nothing to do with that and affected many people.
Comment

Seems like it's the fault of the app, not Apple TV. The title made it sound like it was Apple's fault.
Reactions: tavsingh, secretbum, Maconplasma and 10 others
Comment

It doesn’t - I think it could be due to Apple TV not supporting HLG HDR but correct me if I’m wrong.
Reactions: NightFox
Comment

This is something I have noticed with all ad-based streaming platforms I have tried (YouTube, Hulu, Peacock). Every so often it messes up and won't play content but still plays the ads. The worst is when it plays an ad before the stream then kicks out and starts looping ads.

I avoid ad-based content for this very reason. If ads are a form of payment then I should be compensated when I overpay.
Reactions: lilatheestallion, 123, MrFootery and 3 others
Comment
G