Following the announcement of the Apple Music Voice Plan earlier this month, Apple is now rolling out over 250 new activity and mood-based Apple Music playlists to users. 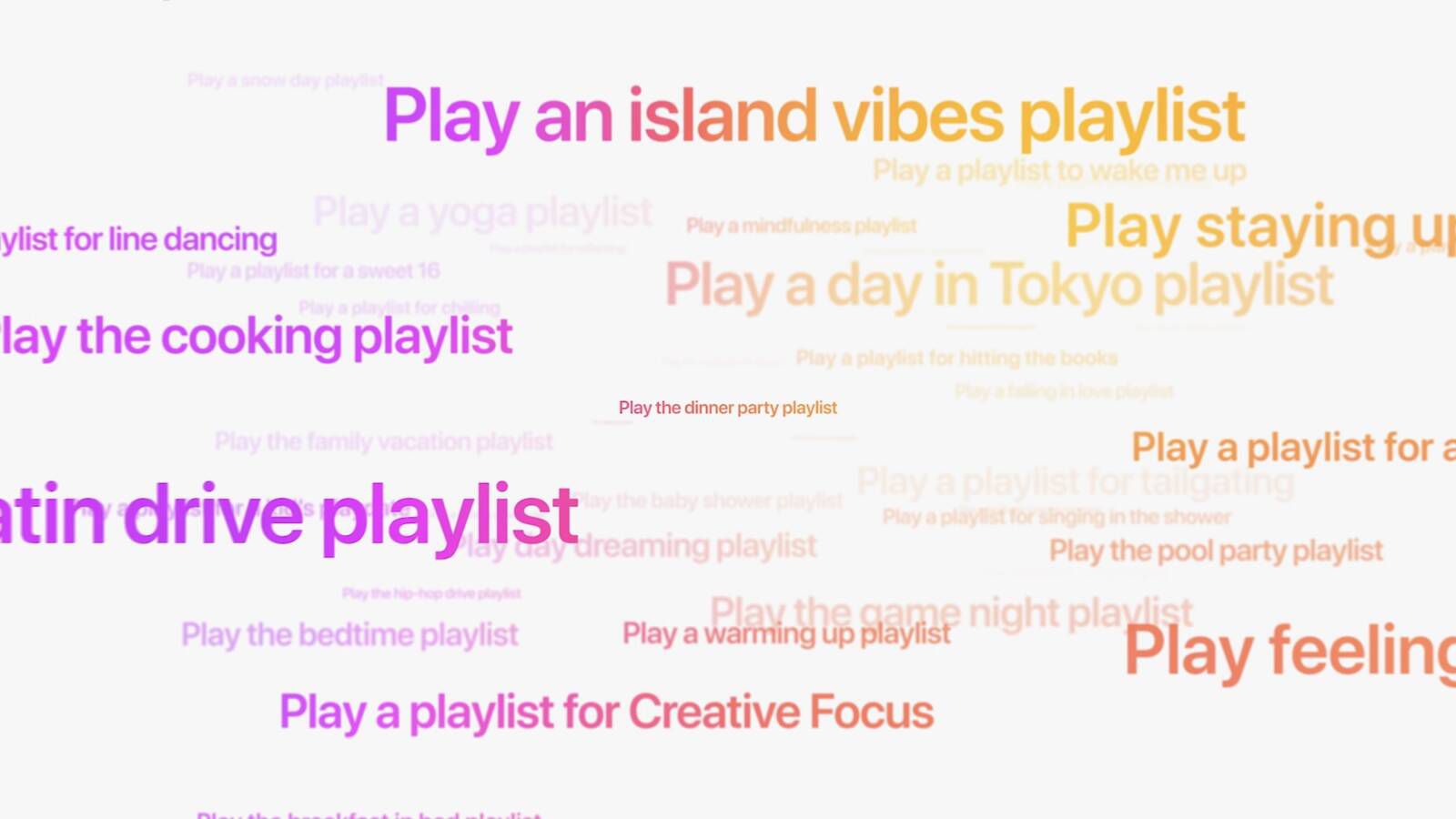 At its "Unleashed" event earlier this month, which also saw the launch of new AirPods and MacBook Pro models, Apple announced that Apple Music was gaining hundreds of new playlists based around moods and activities to compliment an all-new low-cost Voice Plan.

The Apple Music Voice Plan costs $4.99 per month and allows subscribers to access Apple Music's expansive library of songs and playlists using Siri on any Apple device, but withholds features like spatial audio and lossless. It also features a more pared back in-app experience with suggestions based on listening habits and a queue of music that was recently played through ‌Siri‌, rather than the full Apple Music app UI.

To kickstart the Voice Plan, Apple announced that over 250 new playlists based around moods and activities were being added to Apple Music. These playlists are curated by ‌Apple Music‌'s editorial team and are optimized for the Voice Plan, though they are available to all Apple Music users. To access the playlists, users can use ‌Siri‌ commands like "Play the dinner party playlist," "Play something chill," or "Play more like this."

As first spotted by MacStories, these playlists are now rolling out to users. Each playlist features custom animated cover art in a minimalist style, but Apple is not currently providing a central location to access all of the new mood and activity playlists in the Apple Music app.

MacStories has shared a comprehensive guide that lists all of the new playlists and is even offering a Shortcut to get fast access to them locally. The guide and Shortcut groups the new playlists into categories such as Happy, Feeling Bad, Angry, Chill, Confidence and Optimism, Self-Care, Inspiration and Focus, Work and Study, Get Going and Get Out, Romantic, Family and Celebrations, Workout, Sports and Games, Activities, Doing Chores, Driving and Transportation, Places, Meals, Seasons and Weather, and Zodiac.

Hey Siri, play classical music that is truly relaxing, nostalgic, and will help me focus while I read and study--not something that is made to put my brain into a deep sleep and not something that has a jarring opening.
Reactions: SFjohn, amartinez1660, Hammerd and 7 others

Literally Apple asking people to pay to use Siri ?
Reactions: SFjohn, unfunfionn, KeithBN and 5 others

I suspect the Apple Voice Plan service will be a very frustrating service...
Reactions: NARadyk, SFjohn, amartinez1660 and 12 others

hey Siri play me something to soothe me after my endless frustration of you not playing the artist I actually want to hear and having no screen based way to choose it with this asinine tier of service...
Reactions: NARadyk, SFjohn, amartinez1660 and 4 others
B

Why is Singapore not on the list of launch countries? Used to be a priority market for Apple...
Reactions: incoherent_1

jazz1 said:
"Hey Siri, play me some music that will make me feel like I'm not getting ripped off by this new Activity Music scam that should be free for the base price....(silence) Siri, hello Siri...what is the hold-up...oh it is a Hold-Up....my hands are in the air!"
Click to expand...

Wait it is included if you pay for a full Apple Music subscription though. There is no cost difference to those already subscribed to access this feature. Those already paying for Apple Music now (aka the regular plan) have nothing to lose here.

Voice plan is a toned down version of the full plan where you can only play songs if triggered through Siri.
Reactions: CarlJ, chabig, agoodpub and 7 others
L

As long as the playlist are not hardcore hip-hop music with extremely vulgar lyrics, I welcome this.
Reactions: NARadyk, amartinez1660, SurferPup and 3 others

No, they're asking people to pay for a Siri-only version of the entire Apple Music library, aren't they?
Reactions: SFjohn, amartinez1660, agoodpub and 4 others
T

Voice control is the new command line. The systems are not (yet?) really smart enough to consider what you want and can only respond to exactly what you ask. And you have to know the commands it will respond to. Exactly. The commands are not discoverable except by trial and error.

For example, I'd like to ask Siri to play a play list, but not on the Home Pod I'm engaging with but to the Air Play capable stereo system in the same room and another Home Pod elsewhere in the house.

srbNYC said:
No, they're asking people to pay for a Siri-only version of the entire Apple Music library, aren't they?
Click to expand...

Exactly, in other words, they’re paying to use a Siri-only version on Apple Music.

I'm guessing in a year or two, they'll either discontinue this or just make the whole of Apple Music available at this rate minus lossless and spatial audio without *having* to go with Siri and in five years time we'll have completely forgotten that this "Siri only" version even existed.

Certainly seems to be the case. This tier has no other real reason for existing unless they have convinced the artists to accept a lower royalty in order to be included in the mood playlists, hopefully increasing their exposure.

The issue I have with AM is that it seems to be focused solely on the younger generations. Ex, I tried morning coffee playlist and it was some song that was low key but singing about a bad boyfriend. That’s not what I think of when I’m making and sipping coffee. I personally like coffeehouse jazz for that.

They would be able to custom tailor the music to how you listen and do a much better job. Right now, it’s always missing what I actually like since I like pretty much everything but rap, country, and post 80s pop. When it gets the music right the lyrics are often garbage.
Reactions: amartinez1660, ommachi, Hammerd and 9 others
S

Hey Siri... Play some new music without atrocious lyrics, vulgar album artwork, and that hasn't been overproduced to death.

SIRI: Sorry... there was problem with that request. Please try again.
Reactions: amartinez1660, jimbobb24, icanhazmac and 1 other person
D

Just my own experience from multiple free trials of Apple Music, but their playlist generation is complete garbage and miles behind Spotify and Amazon Music.
Reactions: SFjohn, jimbobb24, jinnj and 2 others

Is there a 'stop recommending Drake to me' option available?
Reactions: erinsarah, SFjohn, amartinez1660 and 12 others
S

davidako said:
Just my own experience from multiple free trials of Apple Music, but their playlist generation is complete garbage and miles behind Spotify and Amazon Music.
Click to expand...

Nothing beats Spotify when it comes to recommendations.
Reactions: agoodpub, jimbobb24 and Octavius8

More curated playlists is more better. I’m gonna try some of these later.

People minds will blow when they discover something called “radio stations”.
So, Apple wants to charge, and a good deal of money, for the extra value that Siri supposedly represents?.
Later Apple will charge monthly fees for most voice commands in iPhones and then for email, then for Safari, then for 5G, then for photos recognition, then pro-motion, etc. The ambition of Apple is blinding them.
This service is absolutely ridiculous. This could have been a value added function of AM, that many of us would not use, but charging 5usd ON TOP of AM… wow. Ridiculous. Surely some people will pay, so good for Apple, but a joke to us…
Reactions: CarlJ and BJMRamage

QuarterSwede said:
The issue I have with AM is that it seems to be focused solely on the younger generations. Ex, I tried morning coffee playlist and it was some song that was low key but singing about a bad boyfriend. That’s not what I think of when I’m making and sipping coffee. I personally like coffeehouse jazz for that.

They would be able to custom tailor the music to how you listen and do a much better job. Right now, it’s always missing what I actually like since I like pretty much everything but rap, country, and post 80s pop. When it gets the music right the lyrics are often garbage.
Click to expand...

This is the biggest problem I have with  Music. It keeps pushing new music more than eras it should know I listen to. It also pushes genres I have no interest in. I already told which genres I like, but is ignored. The Like and Dislike buttons seem to be useless. What I also find annoying is that the same songs keep coming up in playlists. It’s like radio, where they only play 5 songs all the time
Reactions: SFjohn, amartinez1660, ommachi and 8 others
You must log in or register to reply here.
Share:
Facebook Twitter Reddit Email Share Link
Register on MacRumors! This sidebar will go away, and you'll see fewer ads.
Sign Up
Top Bottom