Apple marketing chief Phil Schiller has allegedly responded to an email from software developer Ben Slaney to further clarify why the new MacBook Pro maxes out at 16GB of RAM, noting that supporting 32GB of RAM would require a different logic board design which might reduce space for batteries.

Schiller: The MacBook Pro uses 16GB of very fast LPDDR memory, up to 2133MHz. To support 32GB of memory would require using DDR memory that is not low power and also require a different design of the logic board which might reduce space for batteries. Both factors would reduce battery life.
Click to expand...

Slaney himself wrote an article explaining how the new MacBook Pro uses a low power, enhanced version of RAM called LPDDR3E, which maxes out at 16GB. To achieve up to 32GB RAM would have required using DDR4 RAM, but low-power LPDDR4 RAM is not supported by the Intel processors powering the late 2016 models.

Using the iStat Menus tool, Slaney determined that, under normal conditions, the LPDDR3E RAM uses 1.5 watts of power. In comparison, he said the notebooks would use about 3-5 watts if they were using DDR4 memory, although this estimate is rather loosely based on tests of DDR4 RAM on Windows-based notebooks.

Slaney said the 2-5 watts saved translates to 10% of overall power usage being dedicated to RAM versus 20-30% that would be required for DDR4 RAM, which, if accurate, helps justify Apple's power versus performance tradeoff.

Schiller previously addressed these power concerns in an earlier comment:

To put more than 16GB of fast RAM into a notebook design at this time would require a memory system that consumes much more power and wouldn't be efficient enough for a notebook. I hope you check out this new generation MacBook Pro, it really is an incredible system.
Click to expand...

Apple's decision is even more justified when considering background power draw, or the energy a notebook uses to go back into sleep mode after regular usage. Slaney said this figure is estimated to be about 50% of overall power draw on an average system when using DDR4 RAM, but only 20% when using LPDDR3 RAM.

Moreover, the new MacBook Pro would get less than 7 days of standby time if it used DDR4 RAM, compared to 30 days with LPDDR3E RAM, he said.

Apple have been using LPDDR for several generations of their notebooks, and it's part of the way that they get very long standby time on them. Switching to DDR4 would drastically decrease it from the 30 days of standby time that they get now to less than one week. With DDR4 they'd have produced a notebook that would have a completely drained battery if it was at 50% charge and you closed the lid and left it for a few days. Not only would that be annoying, but by running the battery flat often it would end up damaging a percentage of their batteries because they'd frequently get 100% discharged, which puts a lot of stress on them, and sometimes even kills them.
Click to expand...

The rest of the article reflects upon poor battery life in several Windows-based notebooks with 32GB RAM, part of which can be blamed on the FAA's 100-watt-hour limit on notebook batteries brought on airplanes.

Full Article: "Why the MacBook Pro is limited to 16GB of RAM" on MacDaddy

Well, they compromised pretty much everything about this device already.

Who leaves their laptop on standby for 30 days?!
Reactions: dysamoria, rickyipcw, buckingham2015 and 124 others
T

What's with all the empty spaces around the battery? 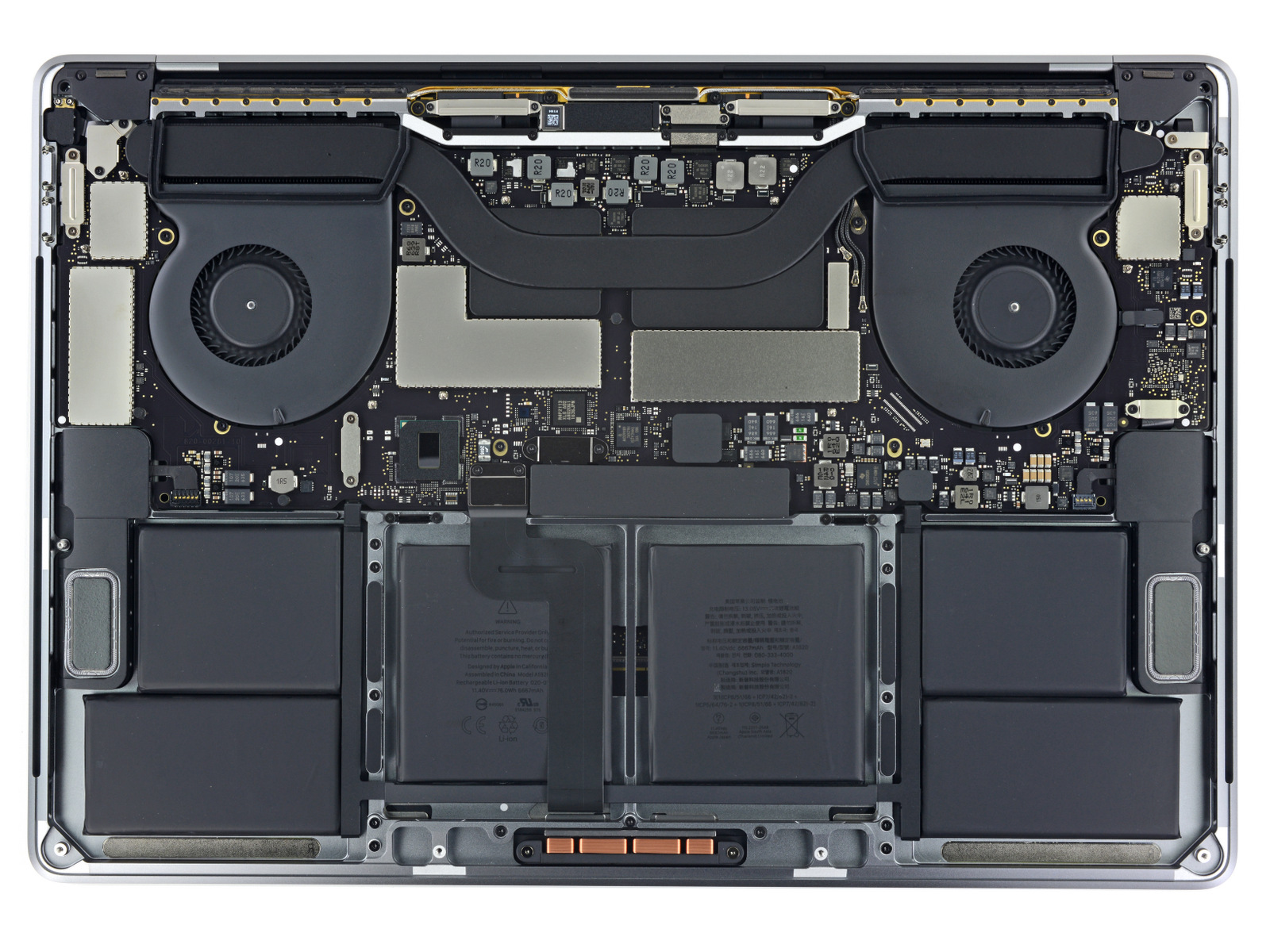 Use the empty space that's already there!
Reactions: Caribbean Mac, Hey Jude, Krafty and 40 others
W

Give me a break, there's at least 4 fingers worth of empty space. Returning the MBP soon for a 2015 model.
Reactions: ruimpinho, Caribbean Mac, Hey Jude and 63 others
W

Which they could have easily countered by making the laptop just a bit bigger /heretic
Reactions: temhawk, JackANSI, dysamoria and 83 others

Or just make the damn thing a bit thicker?
Thickness has never been an issue with my current MBP. It operates on my desk with the top down 90% of the time, and the times I do need it for the road, an extra pound wouldn't kill me.
Reactions: Bobbybergen, temhawk, ruimpinho and 153 others

How about using a bigger box? Have some courage my man.
Reactions: Bobbybergen, temhawk, JackANSI and 92 others

So, is he saying that for the next few years the MBP will not support 32GB of RAM? It's not that battery technology is moving forward that fast, and I don't see apple making a thicker laptop.
Reactions: dysamoria, twhart, aylk and 20 others

Ben Slaney wrote an article which highlighted a key reason the new MacBook Pro is limited to 16GB of RAM, a reason most missed.

Here is the article for those that are interested in reading it in it's entirety: https://macdaddy.io/macbook-pro-limited-16gb-ram

Phil read the article and has clarified a couple points.

The article is nice but not entirely accurate. The MacBook Pro uses 16GB of very fast LPDDR memory, up to 2133MHz.
To support 32GB of memory would require using DDR memory that is not low power and also require a different design of the logic board which might reduce space for batteries. Both factors would reduce battery life.

Any good black friday deals on a decent laptop to hackintosh?
Reactions: Hey Jude, jwdsail, 32828870 and 15 others

Granting an extra 0.3mm to the case would be anathema.
Reactions: ruimpinho, dysamoria, ex0dus1985 and 30 others

Standby time is key if you are going to spend any significant time away from a plug and charger. Of course no one needs 30 days of standby. But Apple's current standby ability means that you don't have to bring a charging cord when you go away for the weekend knowing that you are going to only use light work that weekend. It would be frustrating if the laptop lost charge over time quickly.

One of the key things about battery life is not how the battery works now, but how it will work three or four years from now. Every laptop is sufficient these days during its first year. But Macs are expected to last five years. How is the battery life going to be at that point? Will it be even serviceable for a cross country plane ride?
Reactions: schmidt65, MacsRuleOthersDrool, Ener Ji and 13 others
C

There is nothing "Pro" about the "Pro" simple as that!
Reactions: Bobbybergen, HJM.NL, ruimpinho and 87 others
M

They did want it thiner.
Reactions: york2600, jase1125 and tubeexperience

Or, they could have made it slightly thicker and have battery life with 32GB of RAM.

Apple is the best at both solving technology challenges when it suits their purposes and coming up with excuses when it doesn't.
Reactions: Bobbybergen, HJM.NL, ruimpinho and 83 others
I

I am glad I am moving away from Apple. The machines don't even use DDR4 RAM. That's like a Ferrari with a Ford engine. Also, don't want to compromise battery, but lets make it thinner. For giggles, lets put another power eating display above the keyboard. This is getting beyond retarded!
Last edited: Nov 21, 2016
Reactions: Bobbybergen, HJM.NL, ruimpinho and 67 others
R

Basically they're saying they can't do it.

Steve Jobs would have been like, I don't care what you have to do... JUST DO IT.

tubeexperience said:
What's with all the empty space around the battery?

You know these machines get hot, right? What's more, LiIon and LiPoly batteries can get hot with high-wattage use. That space is the space between having a laptop and a hot potato bomb.
Reactions: ConfusedChris, schmidt65, Xtremjeepn and 42 others
S

16GB is more than enough!
Reactions: Pufichek, DavidBoy, ackmondual and 4 others
P

How about not making the laptop thinner next time and put a bigger battery, user swappable SSD and RAM in it?
Reactions: HJM.NL, temhawk, ruimpinho and 49 others
S

longofest said:
You know these machines get hot, right? What's more, LiIon and LiPoly batteries can get hot with high-wattage use. That space is the space between having a laptop and a hot potato bomb.
Click to expand...