Luxury watch maker Montblanc earlier this month announced the "e-Strap", an accessory band that will add notifications, music control, and other smartphone-connected functions to a traditional analog wristwatch, marking one of the first efforts by traditional watchmakers to offer smartphone integration as the Apple Watch's launch nears.

Alexander Linz of the Watch-Insider blog had the opportunity to examine the e-Strap first hand during a demonstration by Montblanc CEO Jerome Lambert that was held over the weekend in Geneva. 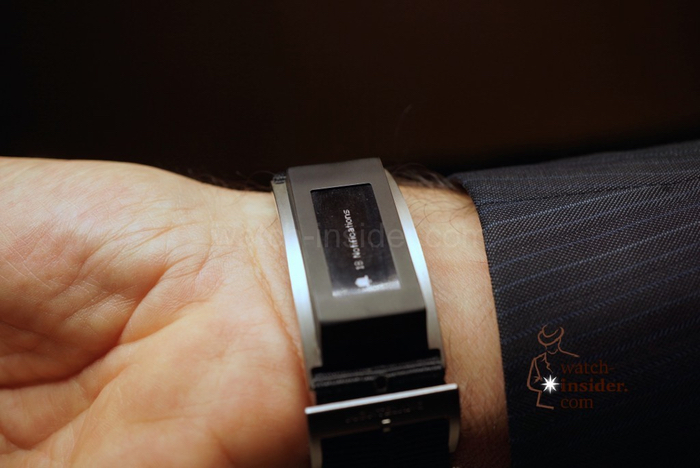 Detailed photos of the watch accessory reveal how it sits on a traditional watch band to rest firmly on the underside of the wrist. The display portion appears rather bulky, making discomfort a possible issue during daily use.

Other photos showcase the 0.9-inch monochrome touchscreen display which shares information such as incoming phone calls, upcoming appointments, and more. The display quality is not nearly as good as depicted in Montblanc's renderings of the strap, with text and icons appearing rather jagged due to the low 128 x 36 resolution.

Not a standalone device, the e-Strap will connect to an iOS or Android smartphone via an app that will allow users to customize the information being displayed on their wrists. 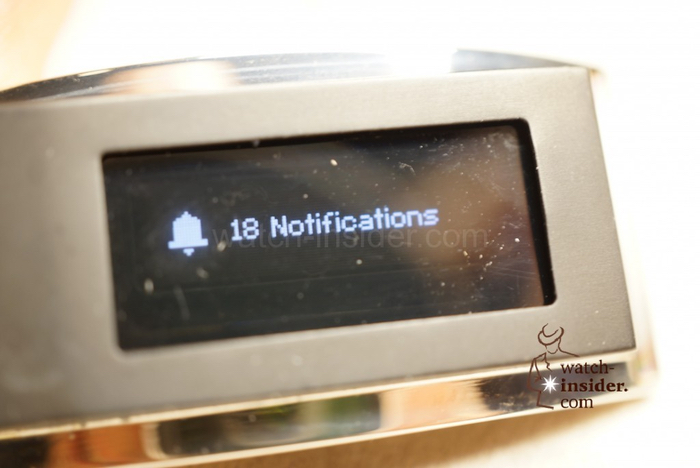 The e-Strap is expected to cost 250 euros and will be available as an optional accessory to select Timewalker Urban Speed watches. The e-Strap also may be compatible with other Timewalker watches that ship with 42-mm or 43-mm diameter cases.

let me understand. I have to buy a specific watch, then buy this, and it's last decade's technology.

This is disappointing because when I first saw this I thought it was a great idea, managing expectations springs to mind!
Comment

"Bulky", if otherwise designed well, doesn't bother me in the slightest.

I prefer bulky-and-useful over Apple's Thinner At All Costs mantra any day. (Whether Montblanc's strap is useful... well, I have no idea.)
Comment

Won't it get scratched because of its position underneath the wrist?
Comment

Am I looking at a house arrest angle bracelet?
Comment
T

flyingember said:
let me understand. I have to buy a specific watch, then buy this, and it's last decade's technology.
Click to expand...

Let me understand. I have to buy an iWatch, then buy an iPhone, to be able to use the iWatch?
Comment

This is the right direction but bad execution.

I'd prefer this method of "smart watch" than the Apple Watch. Yet that does seem bulky and low res.
Comment

Populism said:
Let me understand. I have to buy an iWatch, then buy an iPhone, to be able to use the iWatch?
Click to expand...

If you mean Apple Watch and want all of its features then yes.
Comment

I collect watches and can tell you that the last thing you want is bulk underneath the band....that is horrible.
Comment
S

Execution can be refined. What I think is interesting is that this is a completely different solution to the smart watch concept. IE - not disrupting the actual watch experience and design, but having a 2nd screen. Apple's watch will no doubt be fashionable - but for watch aficionados who aren't likely to give up their time pieces, this is a viable alternative - at least as a POC.
Comment

Wow this is going to sell like hot cakes.

Do I really have to do this?

Huh. Apple apparently has a bigger lead in this market than I expected. Who would have thought something like this would be hard?

This is what happens when management panics, over prioritizes time to market, and decides to outsource the design without proper oversight.
Comment

I wish they would just stick to making fountain pens.
Comment

Dang. The other companies could at least TRY to make some decent competition for Apple!
Comment

Ridiculous. They've totally missed the concept of "Smart Watch". Their execs' heads must not be getting much sunshine.
Comment

I don't gang, it looks really 1984ish...lol like an 80's future prediction of some sort of ankle bracelet
Comment
A

250 euros... that's almost as much as the Apple Watch. People who use this will actually look at the bottom of the watch way more than the top, and afterwards might be like "f- it I'm getting a real smart watch" lol...
Comment
M

A Kind of Alaska