bigpoppamac31 said:
Redid my speedtest and got much better results after upgrading to the latest Airport Extreme. Not sure how some of you are getting such super high speeds though.

I've got fiber-to-the-home here, and they offer up to 1Gbps speeds, but I thought that was just a bit excessive for what I need. Inside the house I run a TP-Link AC1200 dual band router, and I've got Cat 5E ethernet run through the walls to my office and to the living room for the TV and Apple TV. I do need to upgrade the switch I've got up there, as it's only 10/100, but it's not totally important at the moment. My local ISP is great people from top to bottom and I wouldn't switch for any price.

4G improved outside my house in Italy.
Reactions: 45ACP 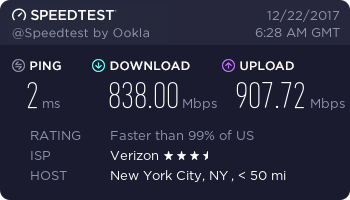 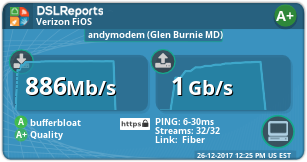 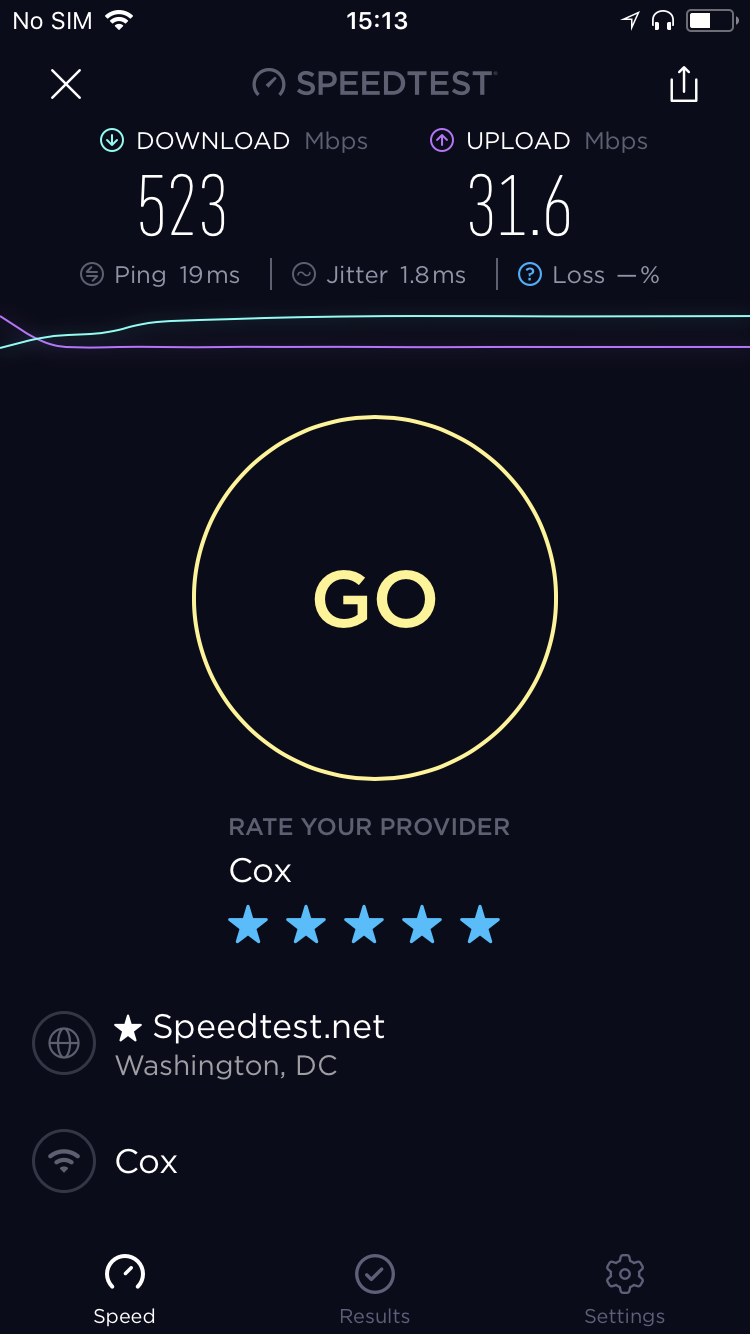 crzdcolombian said:
no offense but I hate you .... in CT we can only get 90mbs

Are you in a suburb? I think cable Wi-Fi performance is affected by other houses around you – Additionally, I usually get about 310 to 400, this was a bit crazy but it's still a valid test

Are you in a suburb? I think cable Wi-Fi performance is affected by other houses around you – Additionally, I usually get about 310 to 400, this was a bit crazy but it's still a valid test
Click to expand...

No, its called a monopoly..... in CT. Comcast is your only option. So they don't care because your only other option is a smaller provider that is even more expensive for slower service. Only reason to do that is out of spite...... but the smaller provider has just as bad customer service haha

Like where I live you can get 30, 50 or 100 mbs. Where wifes parents live they can get slightly faster but still insanely expensive to get the 100.

A while back they were talking about towns in CT doing GIGAbit internet themselves but Comcast obviously fighting that.
[doublepost=1514816661][/doublepost]

4G improved outside my house in Italy.
Click to expand...

This thread makes me sad 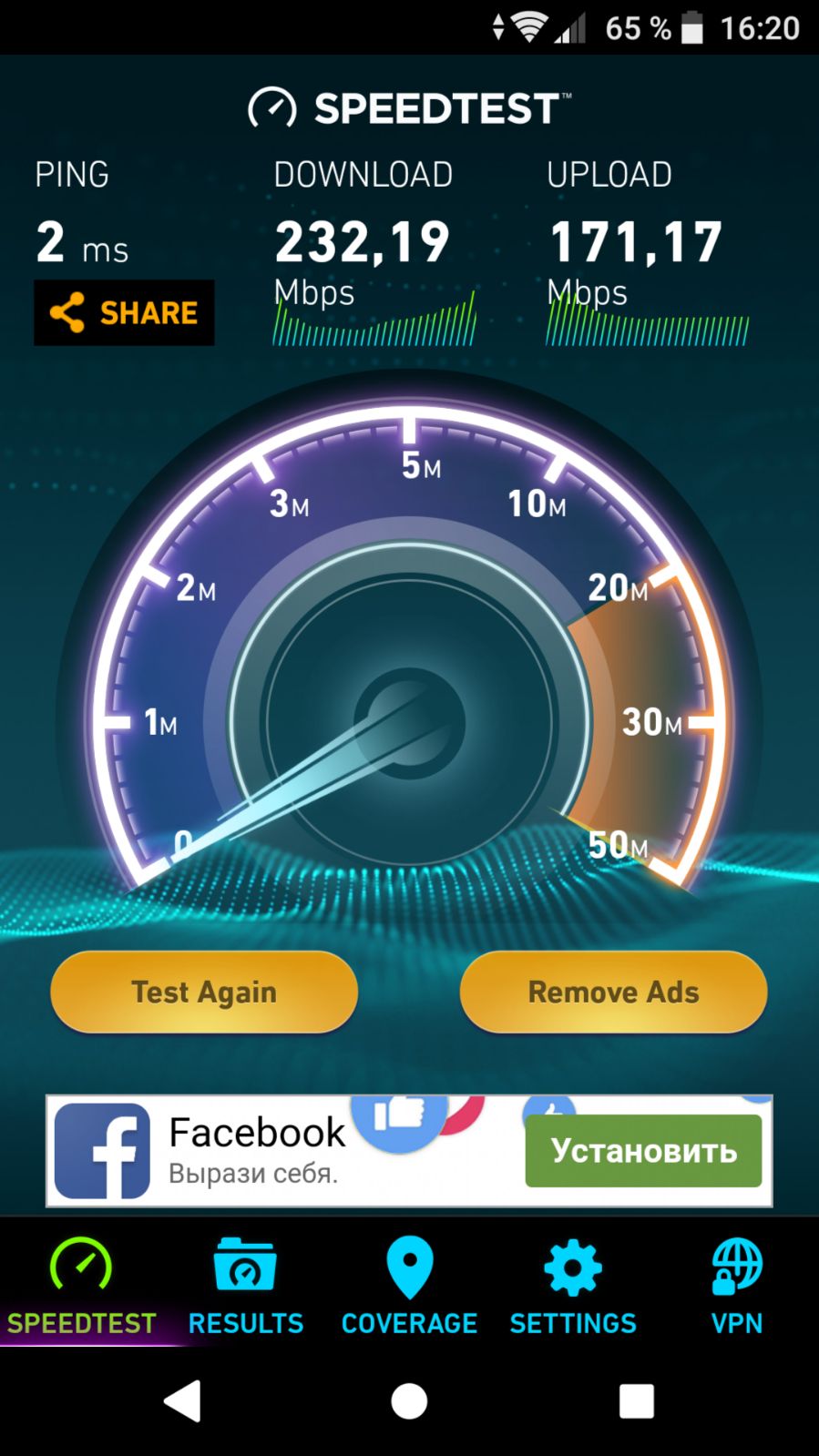 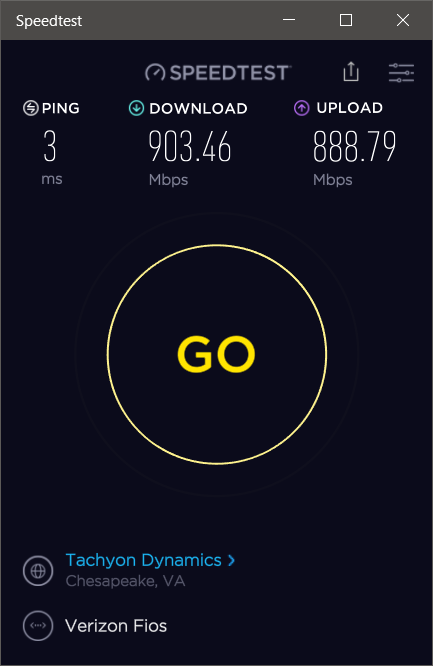 An island in the Pacific Ocean

Popped into 3BB the other day to buy a router with WiFi, having just bought a MacBook Air, my first ever laptop. The nice people there fixed me up with what I wanted (to be honest, I wasn't sure, but they worked it out) and set it up to work with the Air. They also upgraded my service from 10 Mbps down / 0.5 Mbps up, to 30 Mbps down / 5 Mbps up, at the same cost as previously (I pay in advance annually @ about 7,000 baht / $US 210 per year) This is what I am getting now: 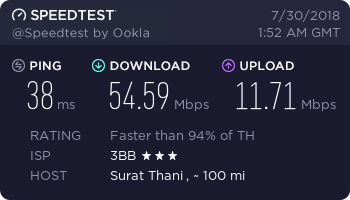 Before fibre came to the neighbourhood about four years ago I was using a dongle on my Mac Mini to access nominally 3G wireless internet @ about the same cost. Advertised as up to 7.2 Mbps, occasionally I got a little over 1 Mbps, but it typically delivered less than 0.3 Mbps. Got that in 2009.

Prior to that, in 2007 when they first introduced wireless internet (experimentally apparently) I was getting about 50 kbps from a system that could deliver up to 156 kbps. Nominally costing 700 baht /month, it was about 18 months before I was billed for a few months, then they shut the service down when the 3G system kicked in.

Going back to where I lived 35 years ago, the nearest telephone was 20 km away, and we didn't have electricity. Battery powered shortwave radio was where it was at to hear from the rest of the world!

dammit... why does Australia have to lag soooooo much (pardon the pun). I'd kill for those speeds.
E

iGobbleoff said:
dammit... why does Australia have to lag soooooo much (pardon the pun). I'd kill for those speeds.
Click to expand...

Anyone have any hints/suggestions/ideas, to reduce the ping?
I

ASUS AC68 router got replaced with Google Wifi. Quite pleased with the performance. I pay for 250/100. 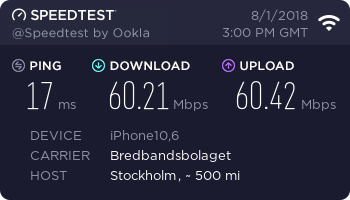 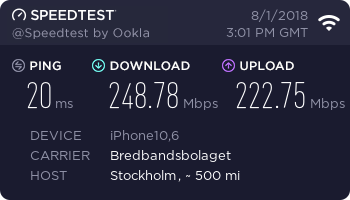 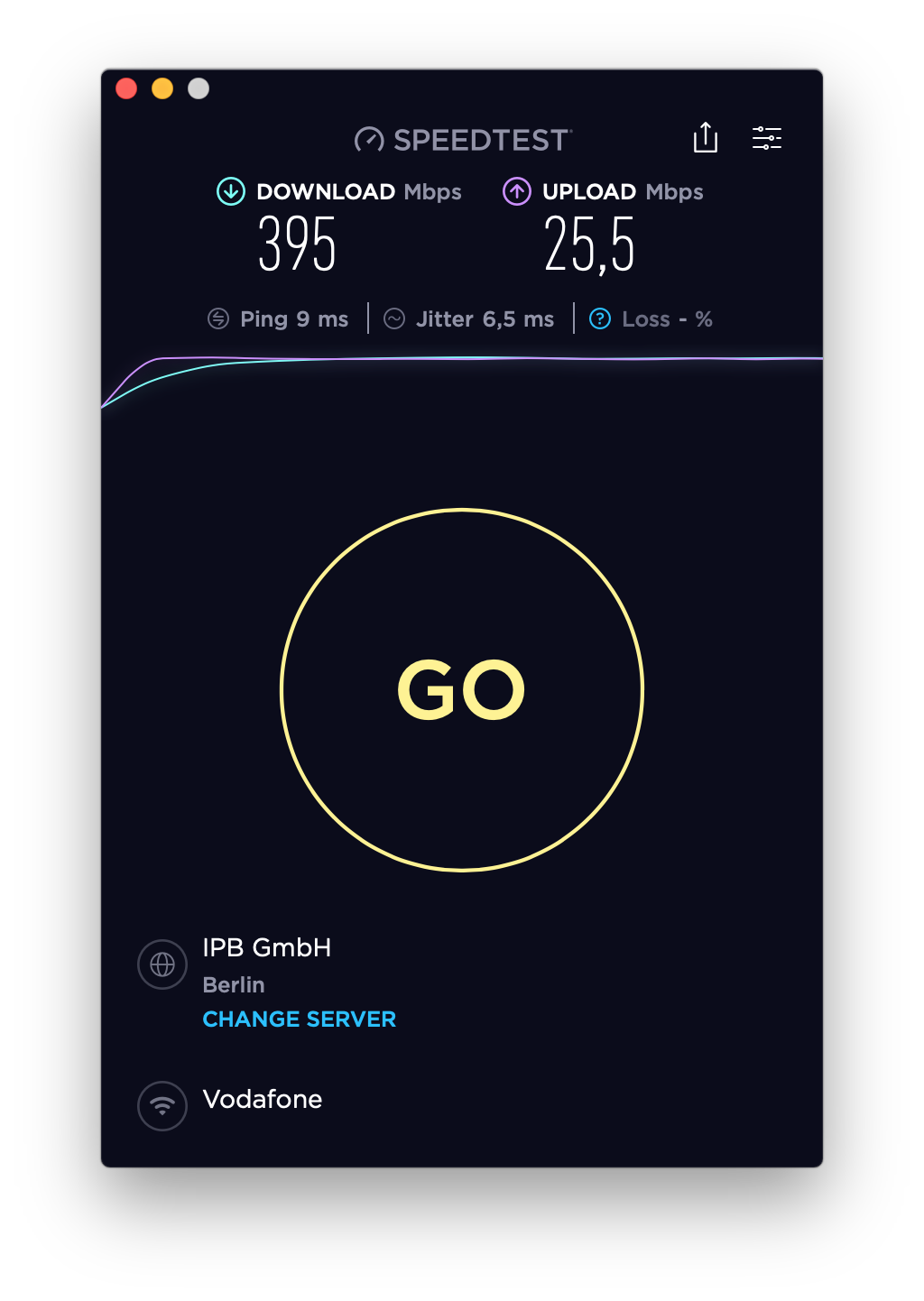 I am a guest in the land of smiles

What is the maximum wifi speed on the new MacBook Pro 2018? I have these results when I do a speed test: 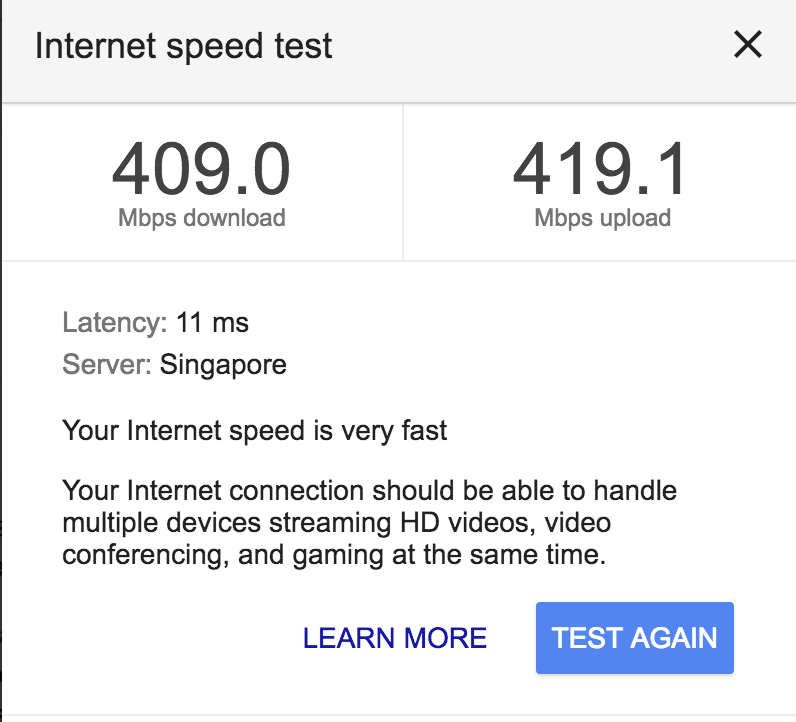 This is mine. I don't know how some of you are getting such fast speeds. Especially for uploads.

bigpoppamac31 said:
This is mine. I don't know how some of you are getting such fast speeds. Especially for uploads.

I have fast upload because my internet service provider offers symmetrical (or close to) speeds. A lot of legacy and traditional carriers only offer high download but low upload speeds. Finally a lot of places are running fiber optical cable and fiber can support hundreds of terabits per second and they build these cables in bundles. We really aren't limited except by routing equipment. There are places now you can get 10Gbps residential internet too. 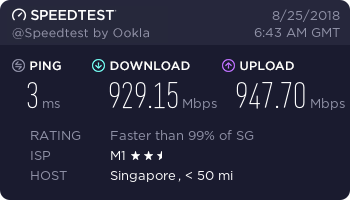 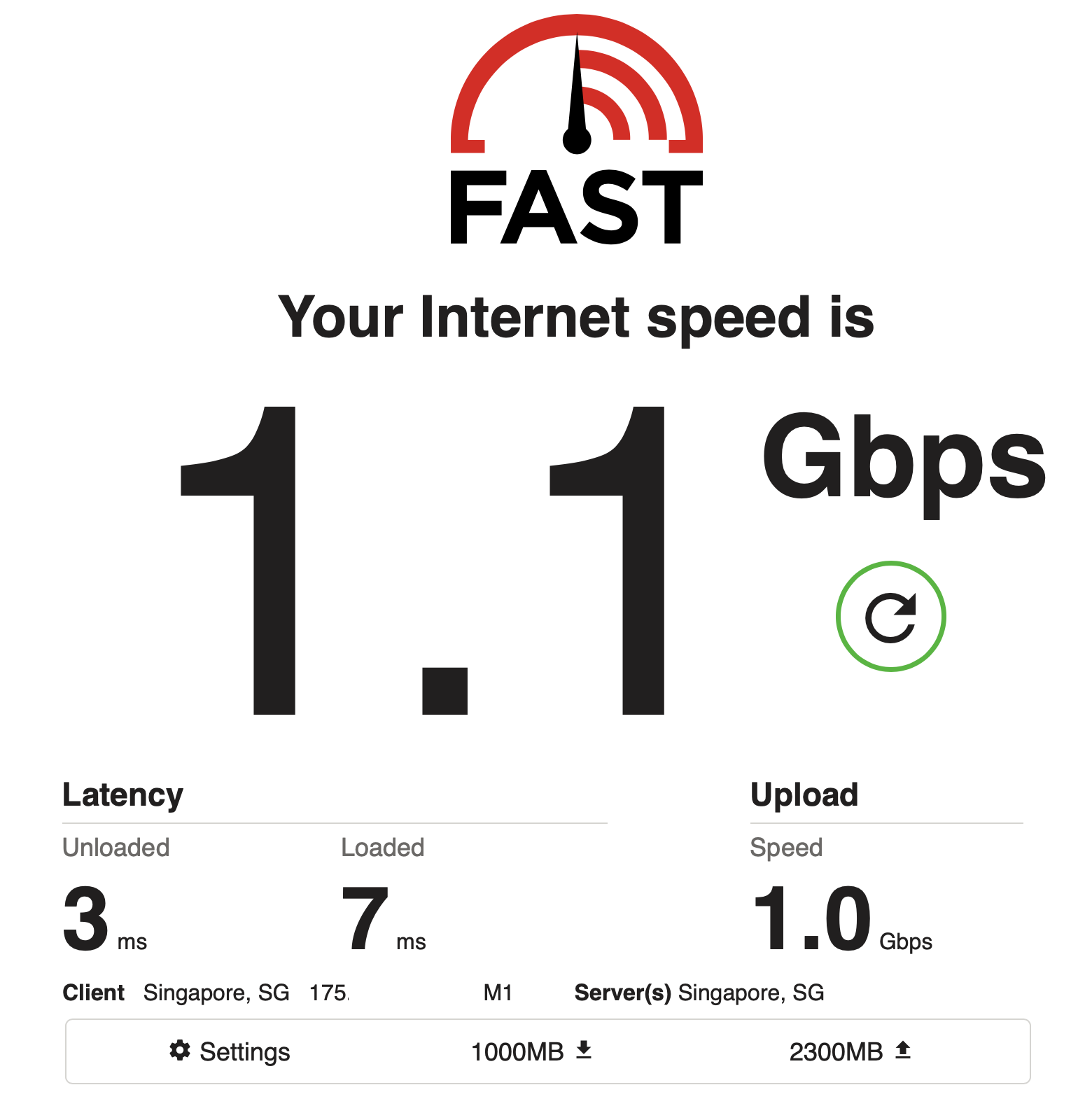