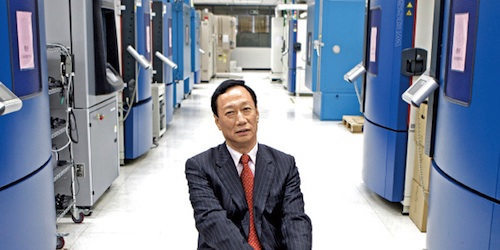 Bloomberg Businessweek publishes a lengthy profile of Foxconn founder Terry Gou, who has built his Taiwan-based manufacturing company into a major player in the computing and consumer electronics industries and become Apple's primary manufacturing partner for a broad array of its devices. The interesting profile comes as part of Foxconn's public relations effort to share the steps it has taken to deal with recent suicides and claims of worker discontent at the 900,000-employee company.

As it relates to Apple, the article addresses how Gou is willing to go to extreme lengths to produce quality parts for Apple's devices, even going so far as to spend in excess of $20 million to mass produce the iPhone 4's metal frame on machines meant only for creating prototypes. As a result of this commitment, Foxconn has been able to produce 137,000 iPhones per day while meeting Apple's design demands.

When Apple's iPhone4 was nearing production, Foxconn and Apple discovered that the metal frame was so specialized that it could be made only by an expensive, low-volume machine usually reserved for prototypes. Apple's designers wouldn't budge on their specs, so Gou ordered more than 1,000 of the $20,000 machines from Tokyo-based Fanuc. Most companies have just one. "Terry is a strong leader with a passion for excellence," says Tim Cook, Apple's chief operating officer. "He's a trusted partner and we are fortunate to work with him." The Longhua plant now produces 137,000 iPhones a day, or about 90 a minute.
Click to expand...

The report balances a description of Gou's personal life and dedication to quality with his demanding reputation, noting that he "exhibits severity and kindness in the extreme." Building Foxconn from a minor parts manufacturing company selling channel knobs for black-and-white TVs to television manufacturers, Gou has aggressively expanded his capabilities over time to constantly win market share and customers while also working to secure its intellectual property in the face of stiff competition in the Asian electronics manufacturing industry.

Gou notes that he failed to handle the suicide issues well, not realizing that he had a problem on his hands until the crisis had begun to spiral out of control. The company has taken steps to address workers' health and happiness with new activities and support channels and has undertaken a major effort to build new factories closer to workers' native homes to keep them closer to their family networks. The effort will also allow Foxconn to do away with its "compounds" where employees live and work, offering them a degree of separation from work when they go home to housing and entertainment options provided by local governments rather than the company itself.

The report concludes by nothing that Gou remains ambitious in his expansion plans, hoping to target the U.S. to expand production there beyond the current 1,000-employee facility outside Houston. Regardless of its future expansion plans, Foxconn appears to be maintaining a close relationship with Apple and is likely to continue being a major piece of Apple's manufacturing pipeline.

Great article. But I believe his last name should be Guo.
T

I am sure this was cleared with Apple legal ...

interesting article, though not a rumor.

down in Fraggle Rock

mwxiao said:
...I believe his last name should be Guo.
Click to expand...

Not according to the article or Foxconn's facebook page

They are an interesting company. I think they opened a massive building or warehouse not too long ago at Alliance Airport in Fort Worth.

Yes, I had to read it twice. More than some small countries so to speak. To manage this alone is a daunting task to say the least.
M

'nothing' in the last para should read 'noting' I believe. Interesting article.
S

great article. Good to see the company is upping its efforts to be socially responsible.

For many companies, the greatest assets is its employees.
K

Little late with that link MacRumors, but better late than never.


It's a great article, and definitely worth the read. Businessweek is hit or miss most of the time but this is a pretty good writeup.

137k per day and still a 3 week shipping timeframe
wow

Well, the iPhone is sold in a lot of countries, not just the US.

But I thought no one wanted to purchase the iPhone 4.

inket said:
Well, the iPhone is sold in a lot of countries, not just the US.
Click to expand...

Sounds like a really smart guy. Lots of good quotes too.

Gou himself, who in the course of a three-hour interview riffed on everything from Warren Buffett ("He's too old") to the uselessness of business degrees ("You can't read a book to learn to swim") to Steve Jobs ("I forced him to give me his business card"). Gou also mocked New York bankers who "see the Hudson River and say, 'I'm a king of the world.'"

I think the aphorisms lost something in translation though.

The US manufacturing comments are interesting. I have always said that it doesn't make sense for us to compete with China because our workforce doesn't know component manufacturing. We build things like cars and windmills, we don't have people that are component experts. It makes sense for a Chinese or Taiwanese company to come here to start those initiatives though.
H

Jobs that could have been in the USA. So much for technology ushering in a new phase of employment for Americans.

I am glad I am not part of this Millennial generation where you graduate 100K in the hole to earn 20-30K a year at some McJob.
S

is the metal frame is death grip antenna? (ouch $20 million gotta say that)

hugodrax said:
Jobs that could have been in the USA. So much for technology ushering in a new phase of employment for Americans.

I am glad I am not part of this Millennial generation where you graduate 100K in the hole to earn 20-30K a year at some McJob.
Click to expand...

Tell me about it. I slaved at my education and its worthless.
N

hugodrax said:
Jobs that could have been in the USA. So much for technology ushering in a new phase of employment for Americans.
Click to expand...

What makes you think these jobs could have been in the US? That would mean either a lot of American workers would have to accept much lower wages (below cost of living here) or we would have to pay much more for our iPhones.
R

The interview is a typical Emergency Exit for Public Relationship... A way to get away from a crisis before it drew more public attention.

Nevertheless, 16 people died to suicide... because they worked like slaves... before they drew the pressure on Foxconn. Foxconn got away from it because local government can't charge Guo & Foxconn while they supplied such a big amount of job opportunity.

Mattie Num Nums said:
For the price of 5000 US employees.

Tell me about it. I slaved at my education and its worthless.
Click to expand...

What did you study?