A purported schematic for the so-called "iPhone 6s" obtained by Engadget Japan (via BGR) reveals that the next-generation smartphone could have a thickness of 7.1mm, a slight increase or equal to the iPhone 6 and iPhone 6 Plus, which measure 6.9mm and 7.1mm respectively. The schematic also suggests that the "iPhone 6s" will still have a home button, while all other buttons and ports remain unchanged. 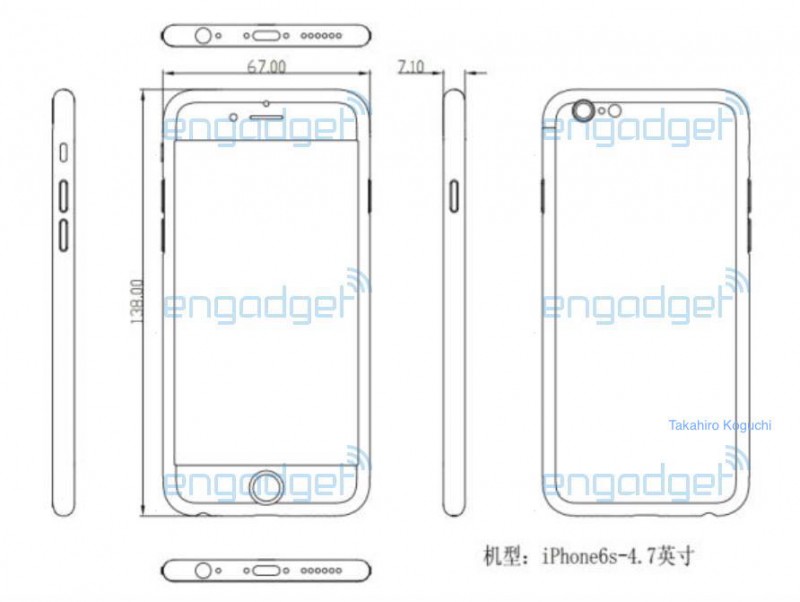 The slight 0.2mm increase in thickness could be the result of Apple adding pressure-sensing Force Touch technology to the next iPhone, enabling the smartphone's display to distinguish between a light tap and firmer press and complete different actions accordingly. The "iPhone 6s" is also rumored to adopt 7000 Series aluminum, which could possibly contribute to marginally different dimensions.

The schematic is consistent with leaked photos of the "iPhone 6s" rear shell, which confirm that the handset will have only minor design changes. In particular, the Lightning connector, speakers, microphones, headphone jack, volume rocker, mute button, sleep/wake button, SIM card slot, antenna lines and cutout for the rear-facing camera and LED flash are all identical to the iPhone 6.

The lack of exterior design changes on the "iPhone 6s" is unsurprising given that "S" model iPhones have historically looked almost identical to the iPhone released one year prior. The iPhone 3GS, iPhone 4S and iPhone 5S, for example, each had virtually the same design as the iPhone 3G, iPhone 4 and iPhone 5 respectively. Instead, the focus of the "iPhone 6s" will likely be on internal improvements.

Leaked photos of the "iPhone 6s" logic board reveal that the smartphone will likely feature Qualcomm's MDM9635M chip, capable of theoretical LTE download speeds up to 300 Mbps, double the max speed of 150 Mbps in the iPhone 6 and iPhone 6 Plus. The next iPhone is also rumored to feature an A9 processor with 2GB of RAM, an updated NFC chip for Apple Pay and an improved 12-megapixel rear-facing camera.

I'd welcome a thicker phone for an enclosed camera lens and bigger battery.
Reactions: Prince Akeem, Wahlstrm, unattributed and 52 others
Comment

arggg14 said:
I'd welcome a thicker phone for an enclosed camera lens and bigger battery.
Click to expand...

Ditto... I'm not a fan of the Camera Ring.
Reactions: unattributed, HVDynamo, Lukkee24 and 20 others
Comment
R

arggg14 said:
I'd welcome a thicker phone for an enclosed camera lens and bigger battery.
Click to expand...

I'm afraid .2mm is not enough to get rid of the protruding camera. It is only a small difference we'll barely notice
Reactions: cbobb123, Vanilla35, Eduardo Forneck and 4 others
Comment

Crosscreek said:
Jony Ive must be gone.
Click to expand...

Did anyone expect the home button to be removed? Why is that even part of the headline?
Reactions: HArzeh, cbobb123, unattributed and 30 others
Comment
H

recoil80 said:
I'm afraid .2mm is not enough to get rid of the protruding camera. It is only a small difference we'll barely notice
Click to expand...

Maybe, but I’ve heard that the camera will be improved. The new hardware could be lower profile. If not then no sale here I’m afraid.
Reactions: HVDynamo, ATC, Lukkee24 and 4 others
Comment

Crosscreek said:
Jony Ive must be gone.
Click to expand...

So he wasn't around when the iPad 3 got thicker and heavier?
Reactions: jponce97, JoEw, Lukkee24 and 10 others
Comment
H

Sure that’s not Officer in Chief of Design?
Reactions: cbobb123, panther quest, iZac and 19 others
Comment
Y

make the new phones as thick as the iPhone 4/4S and the battery will be incredible.. you can also probably squeeze in a crazy sensor into that camera.
Reactions: unattributed, HVDynamo, g-7 and 7 others
Comment

Why would the home button not be there? We are talking about the 6s right?
Reactions: Lukkee24 and Keane16
Comment
P

Unfortunately, this would mean that case manufacturers will have to spin out a new version for the 6S, rather than use the same case design for the 6. Some cases may "stretch" to fit, but the more rigid cases won't fit.
Reactions: dkh587 and Joe HS
Comment

If anyone actually reads to article, they'll know this thickness not for flushing the back camera, it's for adding force touch. I'm sure when this technology get more advanced it will get thinner and hopefully their recent camera company acquisition will fix the protrude but don't get your hopes up.
Comment

H2SO4 said:
Maybe, but I’ve heard that the camera will be improved. The new hardware could be lower profile. If not then no sale here I’m afraid.
Click to expand...

MacRumors said:
The schematic also suggests that the "iPhone 6s" will still have a home button, while all other buttons and ports remain unchanged.
Click to expand...

So EVERYTHING remains unchanged then. What a sentence, MacRumors.

Anyway, this reminds of when the iPad went thicker to accommodate the new backlights. I wonder if it will be any heavier as well.
Reactions: KentuckyApple, Prince Akeem, cbobb123 and 13 others
Comment
0

Hopefully they can manage to add OIS to the regular 6 with this thickness increase.
Reactions: goobot, PowerBook-G5, XTheLancerX and 1 other person
Comment

Rogifan said:
Did anyone expect the home button to be removed? Why is that even part of the headline?
Click to expand...

Yeah, I was thinking this too. The home button is such an iconic part of the iPhone that I can't see them getting rid of it.

Of course, Apple has been known to do unexpected things in the past, so it's not completely impossible, but...
Reactions: PowerBook-G5
Comment

I'm starting to get excited for the 6s now! Come on September!
Comment
2

Rogifan said:
Did anyone expect the home button to be removed? Why is that even part of the headline?
Click to expand...

Apple did acquire technology to combine the screen with the TouchID. This could mean that they will eventually eliminate the home screen, but who knows. I think that if they did that, they could increase screen real estate without increasing phone size. And IMO, that would be a good thing - any bigger and we will be talking on our ipad mini's.
Reactions: AppleScruff1, Gary C Smucker and iamPro
Comment

The only downside here is that some cases may not fit anymore. The upside is the phone will be a bit more grippy. I've always thought the iPhone 6 felt a bit TOO thin.

Maybe the extra thickness will go to a slightly bigger battery too. That would be awesome.
Reactions: XTheLancerX, Benjamin Frost and ptb42
Comment
H

Rogifan said:
The camera bothers you that much? I have my 6 in one of Apple's silicon cases and the protruding camera is hardly even noticeable. Btw, according to Business Insider Jony Ive hates the protruding camera so I'm sure of there's a way to get rid of it without degrading the camera they'll do it.
Click to expand...

Yup, bothers me enough not to buy it. That and the antenna breaks. For a company that are all about aesthetics, (apparently), the 6 is a travesty.

There is an easy way to get rid of it. A thicker phone. I’d prefer that.
Reactions: unattributed, Toubro, iZac and 7 others
Comment
T