Following concerns expressed during the lead-up to this week's Apple media event that the company would be unable to launch the Retina iPad mini in any significant volume before the end of the year, supply chain analysts continue to expect very low supplies of the device when it launches next month.

"The supply for that product is severely constrained," said Rhoda Alexander, director of Tablet and Monitor Research at IHS iSuppli.

"We don't expect to see meaningful volume until first quarter [of 2014]."
Click to expand... 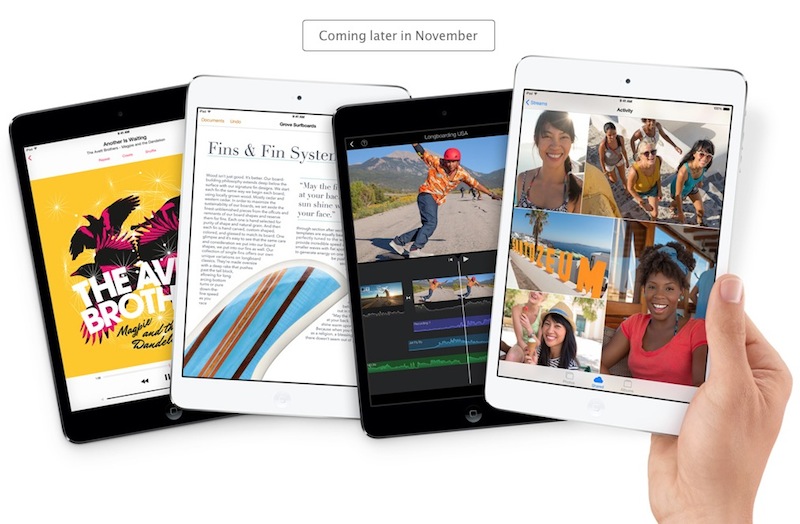 Alexander expanded a bit more in comments shared by The Telegraph yesterday, calling the supplies "ridiculously tight" at one-third the levels seen for last year's launch of the original iPad mini.

Rhoda Alexander, director of tablet research at IHS electronis and media, said: "The supply of the Retina Mini is going to be ridiculously tight in the fourth quarter.

"Apple's 2013 iPad shipment growth is shaping up to be comparatively modest and the shift in launch cycles has played a major role in the slowdown."
Click to expand...

Production of the Retina display panels for the new iPad mini is said to be the bottleneck for Apple, with Apple's suppliers needing to optimize processes for building displays with the same number of pixels as the full-size iPad but at the higher pixel density of the iPhone and iPod touch.

Alexander is certainly not the only analyst to be predicting tight supplies of the new iPad mini, with KGI Securities analyst Ming-Chi Kuo making similar claims. Kuo's modeling has Apple shipping only a little over 2.2 million Retina iPad mini units during the fourth quarter due to those low supplies and a mid-quarter launch, compared to nearly 6.6 million units of the non-Retina iPad mini.

Apple's own announcements have also suggested low availability of the Retina iPad mini, with the company introducing the device at Tuesday's event but declining to announce an exact launch date in specifying only "November". And with the iPad Air launching on November 1, it seems clear that Apple is struggling to produce the new Retina iPad mini in quantities sufficient enough to allow it to launch as the holiday shopping season kicks off at the end of November.

iPad Air for Christmas it is then....

Again, I'm hoping this is incorrect. If not, it would be a pretty rough oversight by Apple...Doesn't take a brilliant man to understand that products need to be on the shelf for holiday shopping season.

Well, according to about 10 different CNET articles on Tuesday, nobody is going to buy them anyway, or any other iPad again for that matter, so it's probably not too big of a deal.
R

Does anybody know if the Retina Minis will be carrier unlocked. If I buy from T-Mobile can I use it on AT&T as well?
M

i remember the stocks last year

my apple store is a flagship but had very little stock of iPad Mini, our customers couldn't wait so they went for the more expensive iPad

they paid in advance and had to wait for weeks to get their products...

Where is the gold version?

Where is the A7X?

Where is Touch ID?

My guess is this tablet will be in ample supply.

Agreed, that's how I got here, too! lol
W

The supply Vs demand game is always interesting. Porsche used to be very good at it too, limiting stock helped keep the residuals high, whilst demand for the product remained high. Thing is, over time, people get bored of waiting and will start seeking alternatives. It also allows time for competitors to up their game.
I

It sounds some kind of maketing tactics. If you just do not prepare for large volume production, why wouldn't you put the conferrence a while back, this seems much reasonable.

Xenomorph said:
Where is the gold version?

Where is the A7X?

What would A7X have that A7 doesn't have?

Demand will be super high. Supplies will be tight. Analysts will claim production issues. Opening weekend sales will be record breaking and many many millions.

Did I miss anything.
F

gregwyattjr said:
That's what he said
Click to expand...

Is that when she leaves you?

Anywho, I have a hard time believing Apple would set themselves up for over a year of shortages. A few months may be good for hype, but a year, that's just lost revenue.
S

Since I do a lot photography and love photographs I personally prefer the iPad. Now Have to wait I guess 2 months for the device to reach UAE. Just today UAE began preorder from one of the telecoms. I was one of the few lucky ones to get hold of the Gold. As of now Gold is out of stock though black and silver is still available. Well just FYI.
R

I bet the mini costs more to produce than the air, yet sell for $100 less. The pricing doesn't seem to make any sense.

A Large reason for this is also because of China being included in the initial launch. This is causing annoyances with not allowing preorders of the 5s and iPad Air for launch day.
B

iphone01ninja said:
It sounds some kind of maketing tactics. If you just do not prepare for large volume production, why wouldn't you put the conferrence a while back, this seems much reasonable.
Click to expand...

I hate this too. Some people would try to make profit from that. It doesn't seem they ready to sell but just to let people delay from buying other brands.

They're doing it on purpose lol

"The supply of the Retina Mini is going to be ridiculously tight in the fourth quarter."
Click to expand...

So he is basically saying Apple will still sell/ship more Units than the Surface and Surface Pro sold all last year combined, but there will still be a waiting period for most people?
You must log in or register to reply here.
Share:
Facebook Twitter Reddit Email Link
Register on MacRumors! This sidebar will go away, and you'll see fewer ads.
Sign Up
Top Bottom