Belkin, known for the accessories that it makes for Apple's devices, recently announced its first MagSafe products, the Boost Charge Pro MagSafe 3-in-1 Wireless Charger and the Car Vent PRO. The wireless charger isn't out just yet, but the Belkin Car Vent Mount PRO with MagSafe has launched.

The Car Vent PRO is, as the name suggests, a mount that's been created for use in the car with a design that attaches to a car's vents. Priced at $40, the Car Vent PRO is not a charger and has no charging capabilities. 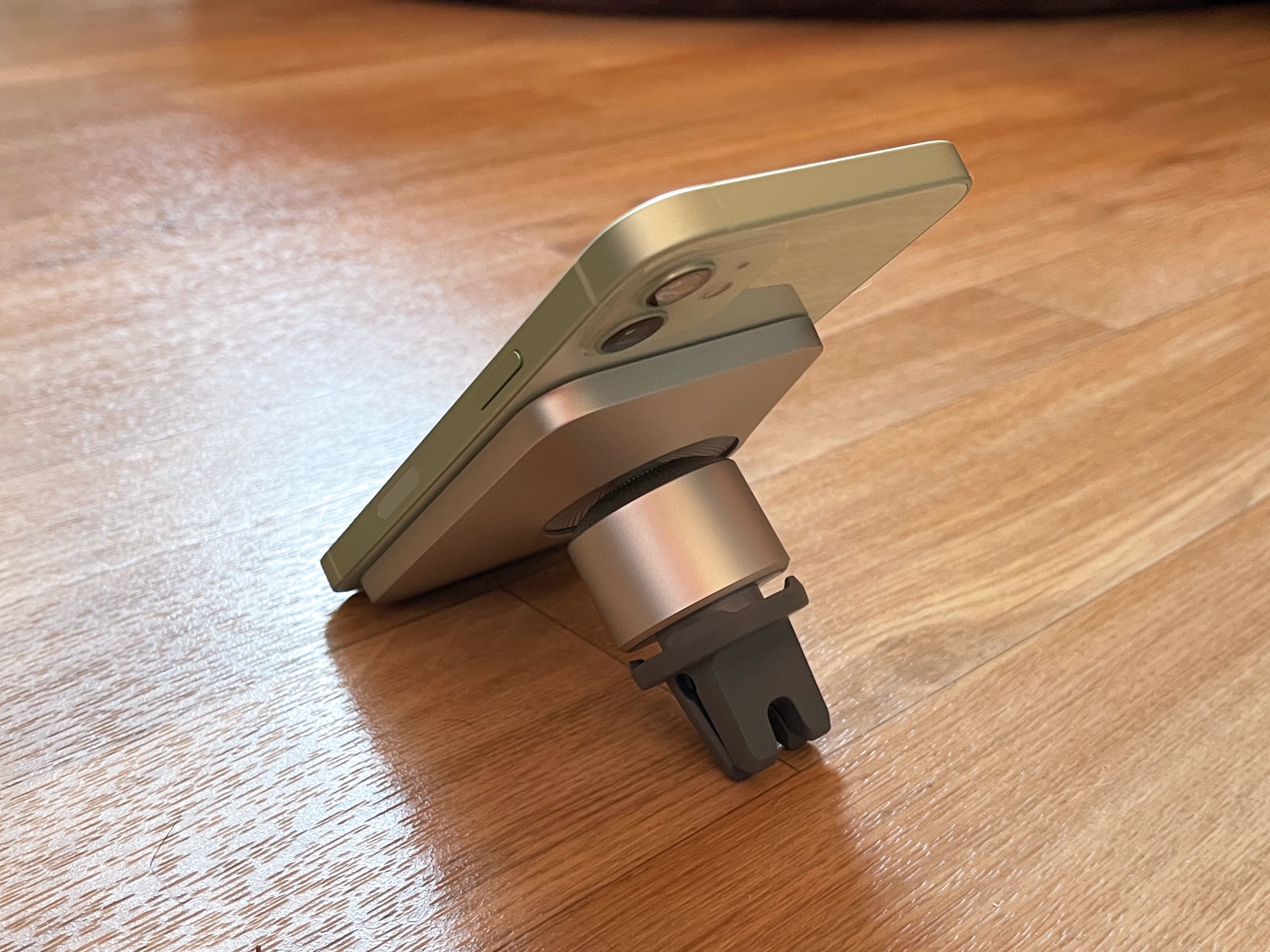 The accessory is a simple magnet-based mount that attaches to MagSafe devices that include the iPhone 12, 12 mini, 12 Pro, and 12 Pro Max, adhering to the MagSafe magnet built into those devices. It also works with MagSafe cases attached to iPhone 12 models.

I'm not entirely sure why the Car Vent PRO has "Pro" attached to its name because it's a fairly simple mount. It's made from a lightweight plastic material that's designed to look like aluminum with a softer material on the mount portion of the accessory to ensure an attached iPhone isn't scratched or otherwise damaged. 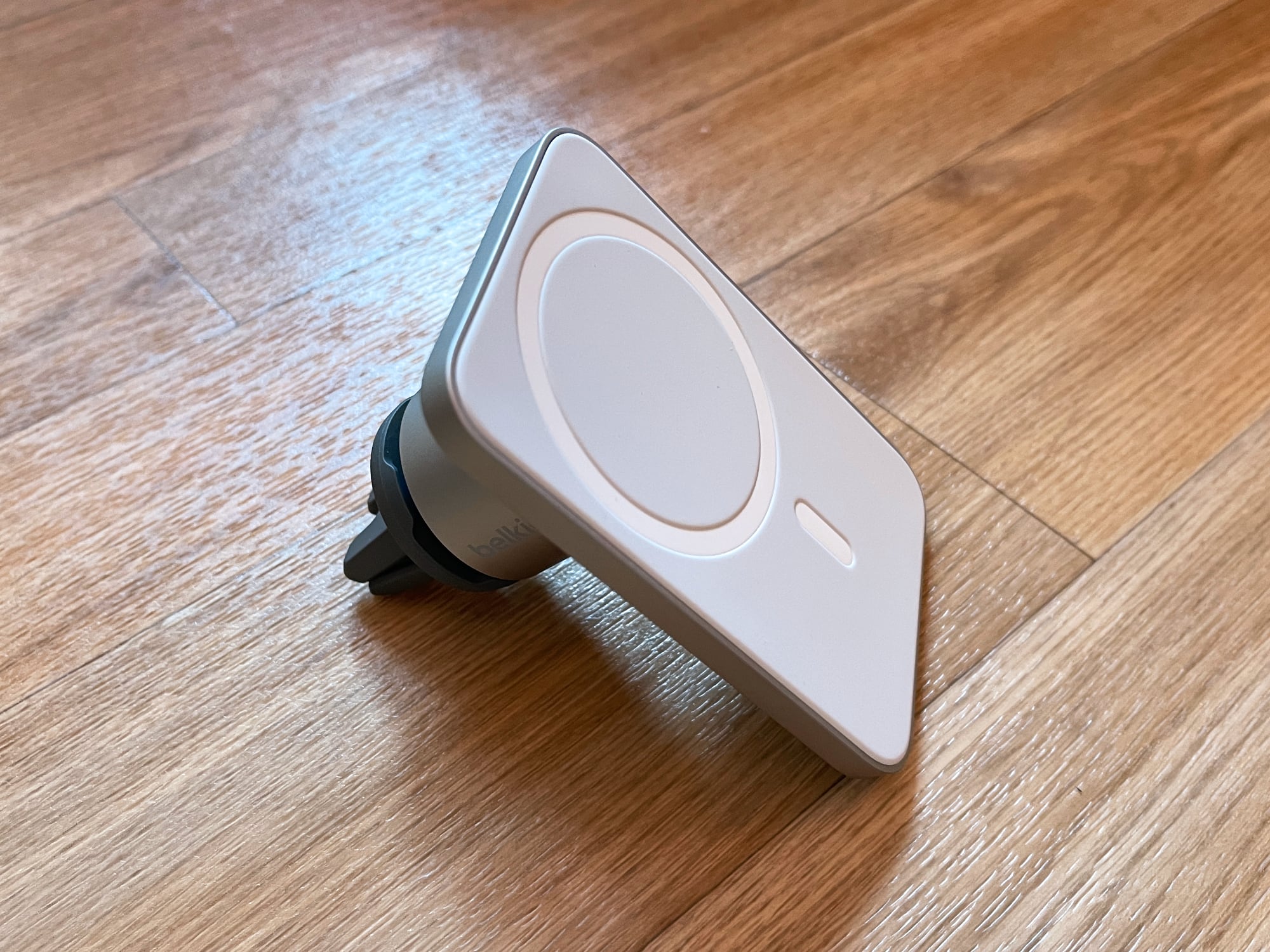 The lightweight design is nice because it's not putting unnecessary weight on the car's vents. There's a silicone prong on the back of the Car Vent PRO that grabs right into a car's vents, with about an inch and a half space between the vents and the front of the mount. The grip is tight enough that I'm confident it's not going to come loose from the vent. 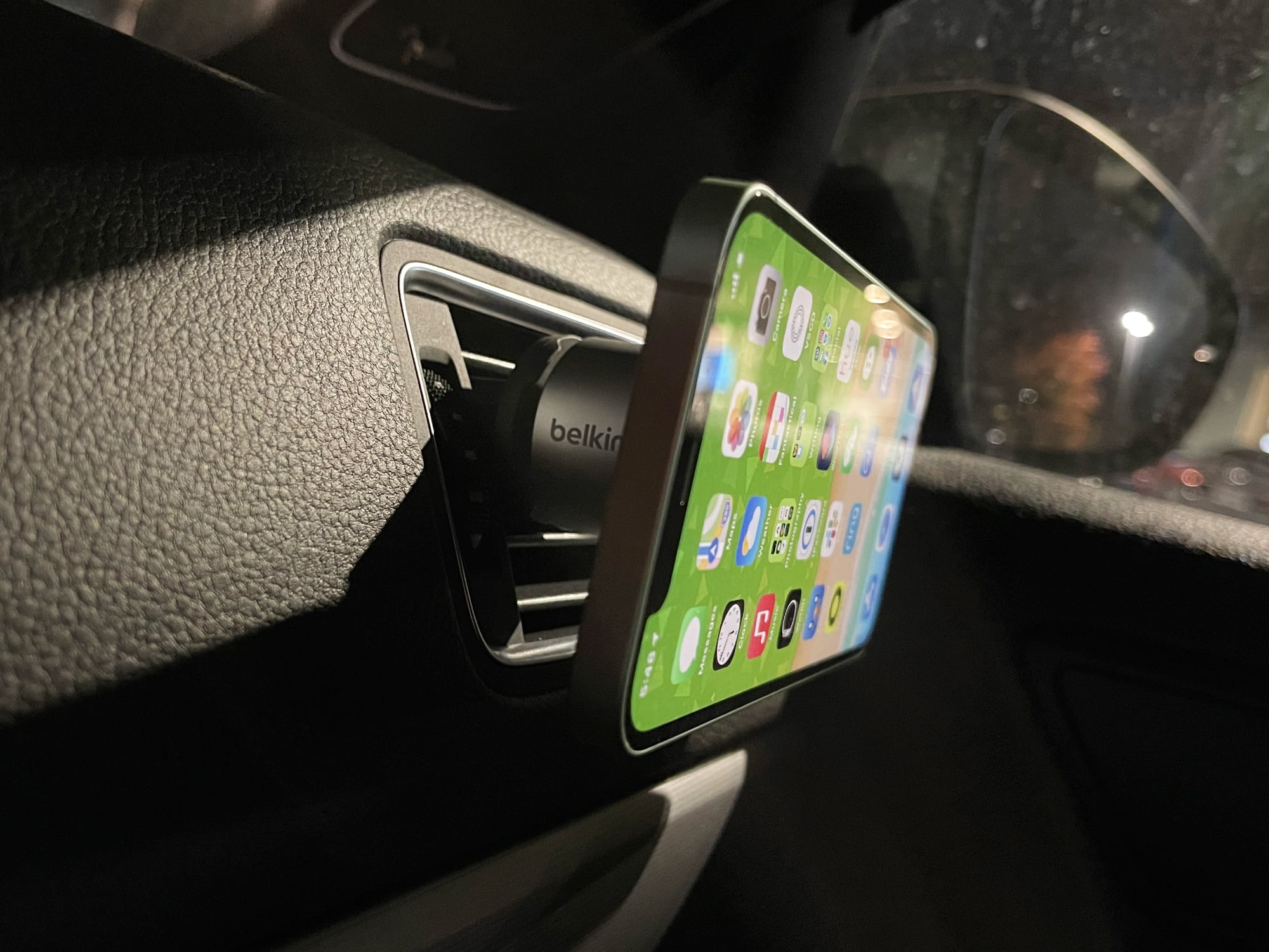 I'm not often in the car these days so I haven't been able to do extensive terrain testing on how well the magnetic connection works. With my iPhone attached, if I give the mount a good shake I can dislodge my iPhone, but I do have to put a decent amount of effort into it. 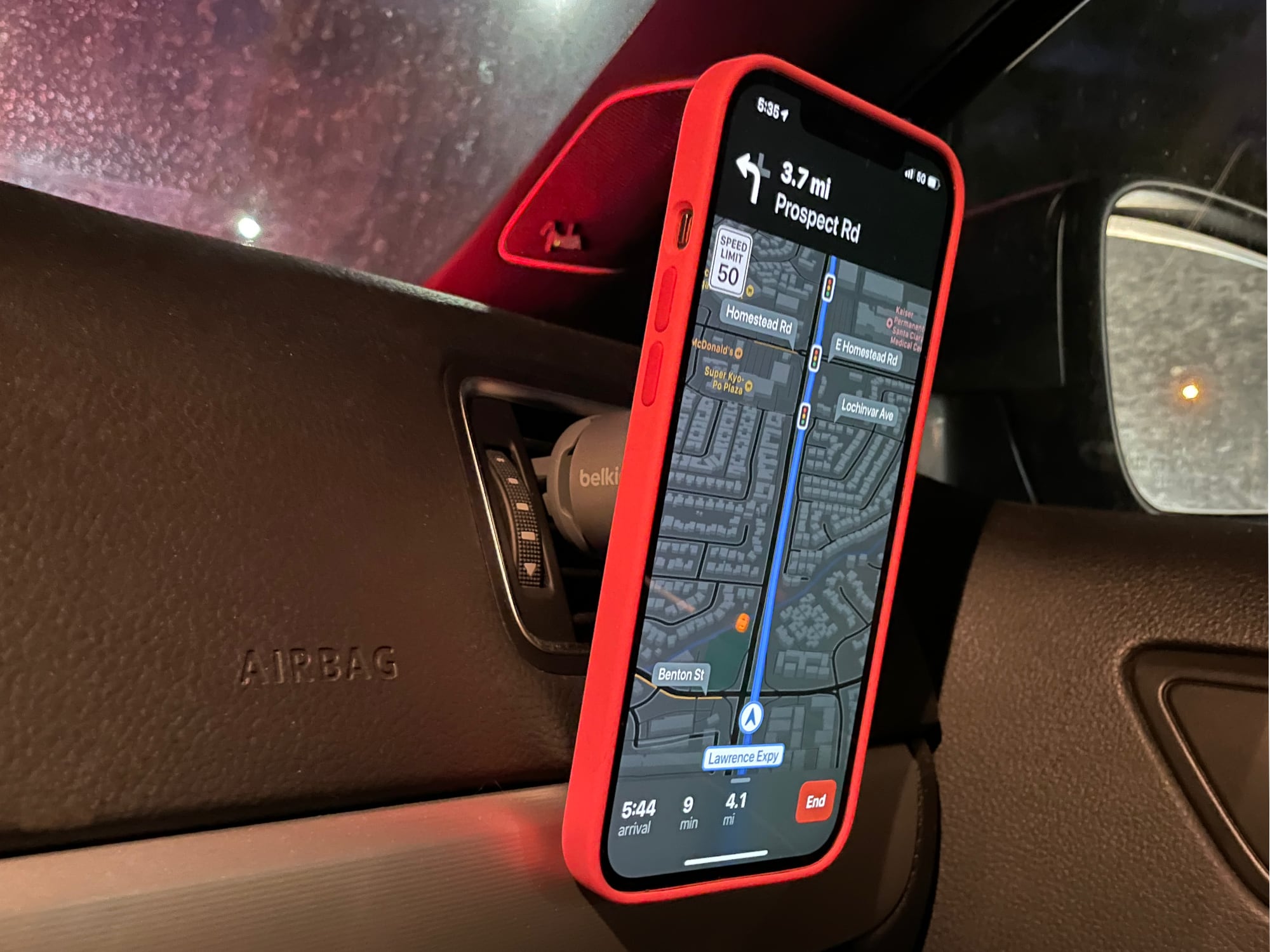 I suspect that there are situations where a huge bump could dislodge the iPhone from the mount, but for day to day smoother driving, it feels well-adhered. I took several trips on a fairly bumpy road and had no problems with the magnetic connection with an iPhone 12 or a heavier iPhone 12 Pro Max even at fast speeds and during turns. 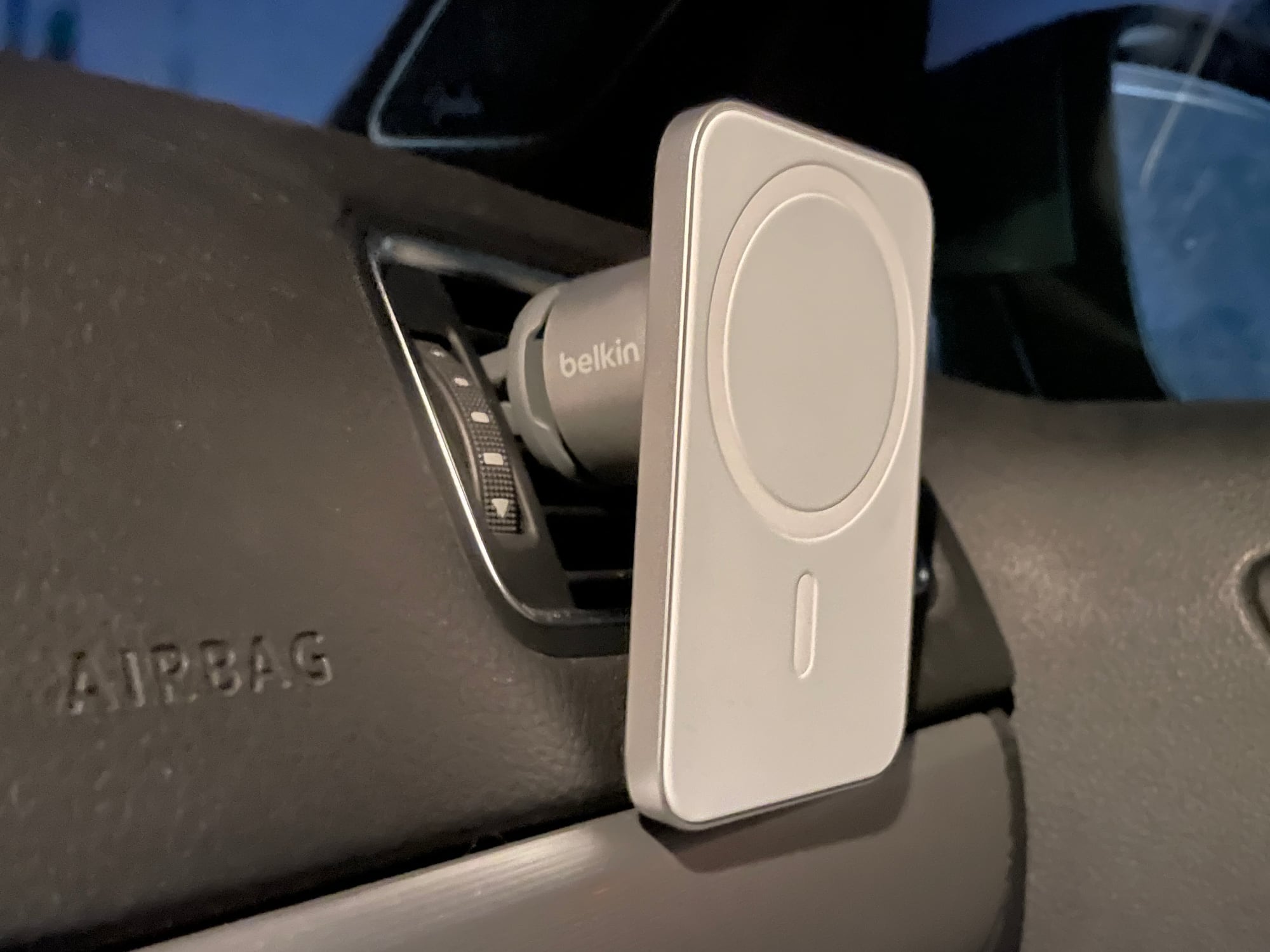 While there's no built-in charging, you can attach the Vent PRO to an in-car Lightning cable if you already have that setup, which makes it more useful. There is a spot for routing a cable around the back if you do want to use it with a charger. My car's charging ports are located in the center console under a lid, so it's not a convenient setup for my situation and I wasn't able to test it with a cable attached. 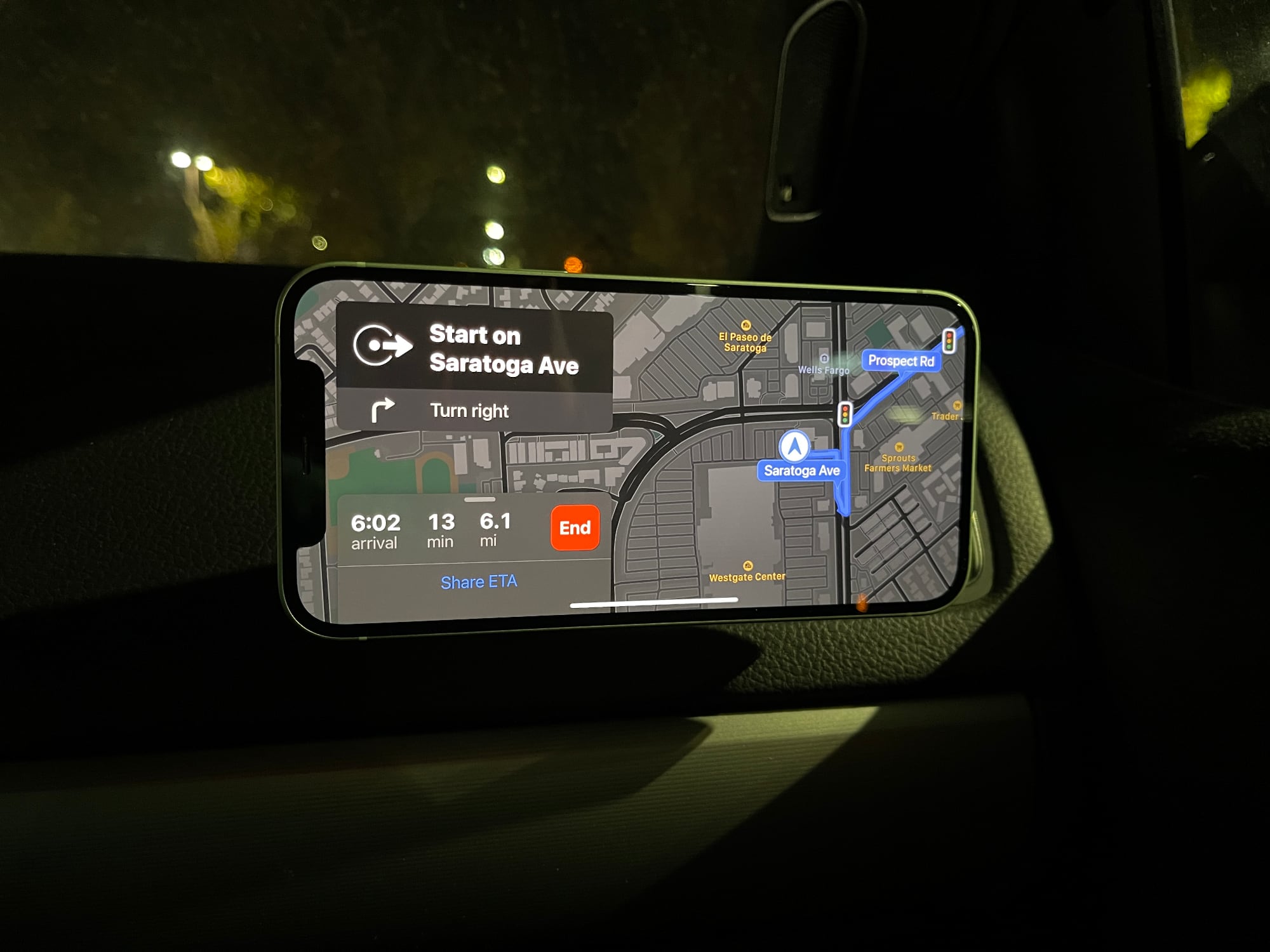 The Car Vent PRO can be used in either portrait or landscape mode with an attached iPhone, so depending on your in-car setup and how you prefer Maps to look, you can get it working the way that you like. To facilitate use in either orientation, the Car Vent PRO itself rotates thanks to an adjustable ball joint that can also change the angle of the phone as needed.

Belkin's Car Vent PRO does what it's supposed to do - it successfully provides a way to mount your iPhone in the proper position for using apps like Maps while in the car. The magnetic connection held up well in my testing, and the adjustable ball joint allows the mount to work in most vehicle setups.

Compared to other mounting options, it's simple because it requires no extra hardware or magnets, and it's basically the only MagSafe mounting option at the moment. If you need a mount for the car and have an iPhone 12, Belkin's option is worth checking out.

The Belkin Car Vent PRO can be purchased from Apple for $39.99.

Note: Belkin provided MacRumors with a Car Vent PRO for the purpose of this review. No other compensation was received.

Ha, I was semi on board even at $40 when I thought it WAS made out of aluminum. Now that I hear it is made from plastic, this is a hard pass.
Reactions: Oilbrnr, Surfer13134, imageWIS and 2 others

This would be "Pro" if it included wireless charging. This is just a magnetic mount.
Reactions: FHoff, Hammerd, Prince Akeem and 24 others

"I'm not often in the car these days so I haven't been able to do extensive testing on how well the magnetic connection works."

Maybe have somebody who does drive review it then? lol
Reactions: Orka, Tech for Kings, qtrim and 30 others
T

Just seems pretty redundant without charging capabilities. The point of a magsafe mount is surely to provide ease of attachment without unnecessary fiddling. It defeats the point if I have to attach and remove a cable each and every time I want to move the phone.

I would rather Belkin had focused their efforts on releasing their 3-in-1 MagSafe charger before Christmas. That’s a far more enticing release.
Reactions: JulienBerthelot, attila, jermwhl and 6 others
M

I'll definitely grab something like this when I upgrade in 2 years. Keeping my car for another 5 or so which doesn't have carplay. Probably not a $40 plastic version. In 2 years I expect several options.
Reactions: aajeevlin
M

Still waiting for this stand, guessing it’s not this year then.
T

Yes, it's expensive, but I got it right away and it works great. Sticks tight and easy to use. Happy with the purchase and much nicer than other similar vent mounts.
Reactions: 3rdiguy, friedmud, CPx and 5 others

I’d have been into this if it had a stand GPS sized ball mount, so I could attach it to an arm; hella cheaper than buying a GoPro and dash mount.
Reactions: Blu-ray1972
D

it’s kinda pointless until it can charge the phone though isn’t?
Reactions: FHoff, ignatius345, attila and 1 other person

kuwxman said:
Ha, I was semi on board even at $40 when I thought it WAS made out of aluminum. Now that I hear it is made from plastic, this is a hard pass.
Click to expand...

Why do you care so much about the material though? If it's well put together and does its job, that's what matters. Btw I think aluminum could interfere with the cellular reception.
Reactions: MRGRAY6997
M

Danindub said:
it’s kinda pointless until it can charge the phone though isn’t?
Click to expand...

Returned mine immediately. The magnet is definitely not sufficient. Literally going around a corner from a turn lane is enough to make the mount shift one direction or the other and send my phone flying. The mount may be "lightweight" but it protrudes so far out from the mount point on my car's vent that with my iPhone Pro attached it's enough to make my vents swing in whichever direction I turn the car (and thus the phone flying). This is a terrible product.
Reactions: Kram Sacul, billcod, Hammerd and 11 others

mnsportsgeek said:
Is wireless carplay pointless then?
Click to expand...

Obviously not (as long as your car has a wireless charger)
Reactions: attila and decypher44

Living in Florida car vent mounts are unacceptable. I want one where I can attach it to my existing floor mount. They need to make one with a GPS/GoPro/Standard ball hitch attachment to be worth anything.

I got this one off Amazon and it works very well and blends in - wireless charging as well.

Not an affiliate - bought it, use it... works great. 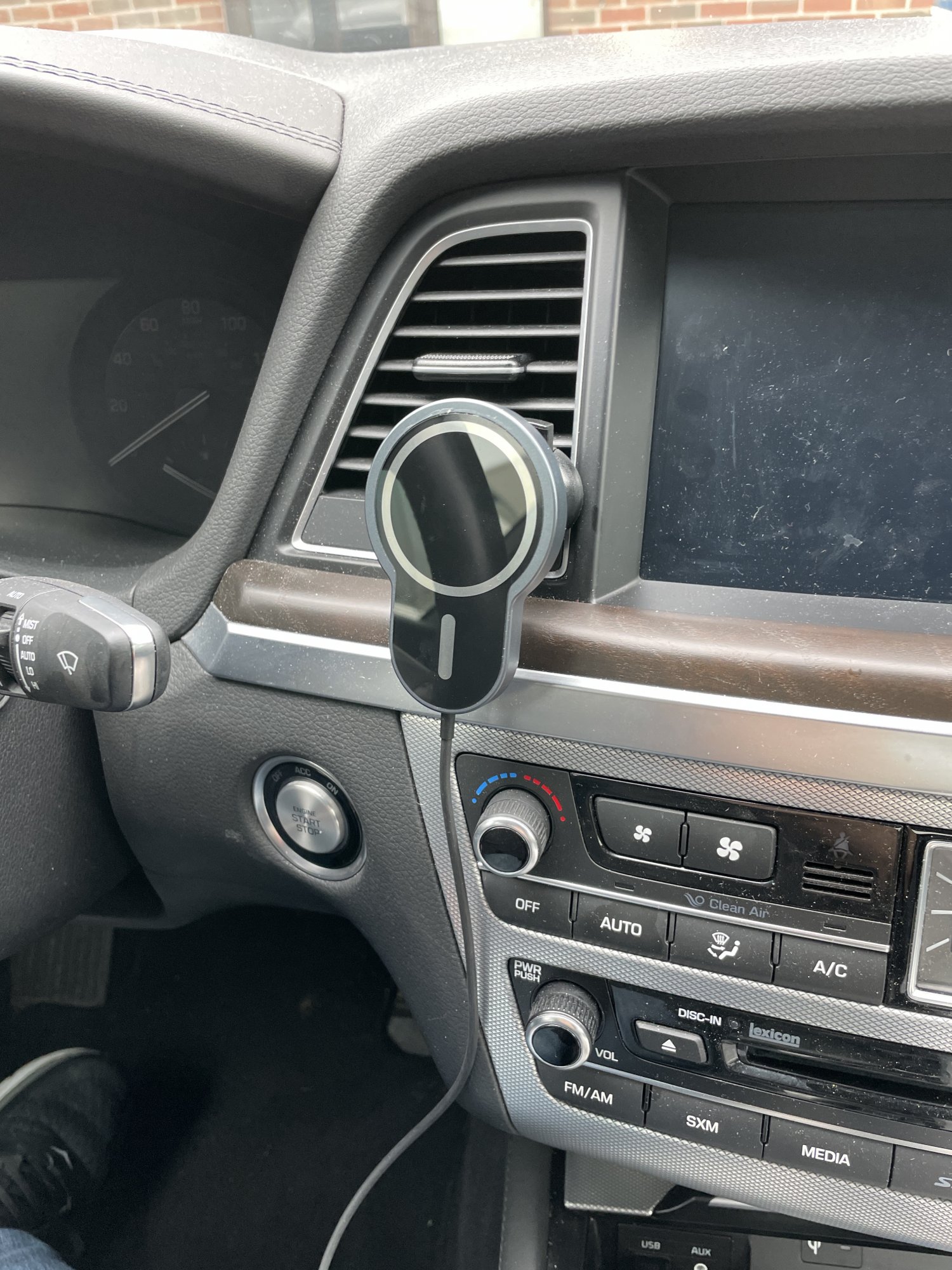 Does not give the same “Bling” you get with an actual MagSafe charger from Apple though.
Reactions: DanTSX, lorkkrue and LeadingHeat
T

You can still plug in a charger
Reactions: Huck
G

I like the idea of a Magsafe car mount, but not a vent one. I'd get one if it had a suction cup mount that can attach to my windscreen and that includes charging via Magsafe. Currently using the Belkin universal car phone mount which i really like. Turn that into Magsafe with charging and i'm sold!
Reactions: mlblacy, neliason and V.K.

I got the ESR one. Same price and it has wireless charging, but only at 7.5W. So far it's being working great. 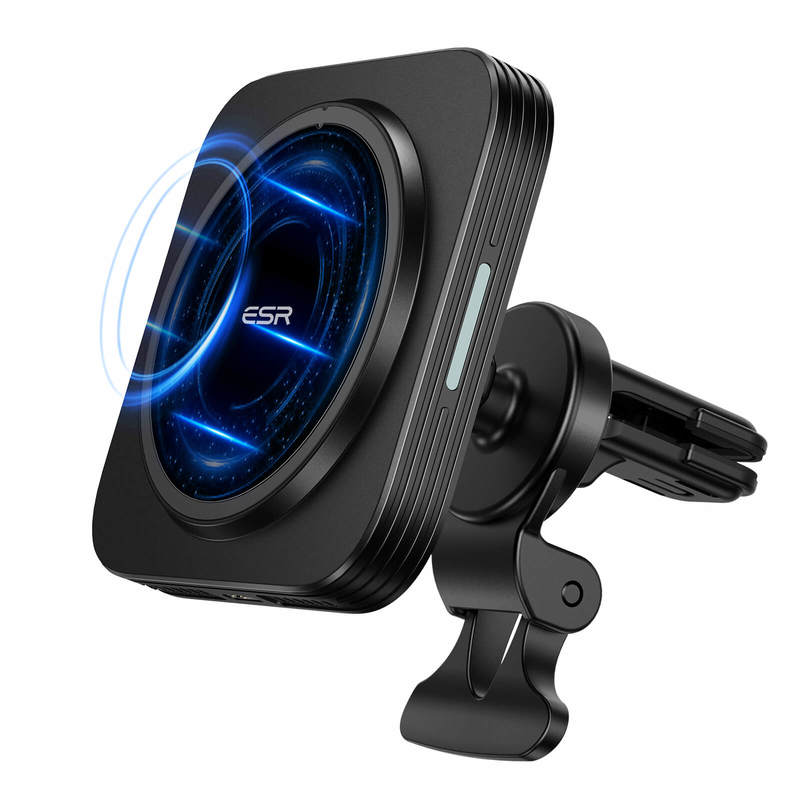 This car mount with MagSafe supports wireless charging for iPhone 12 series. With it, you have both MagSafe car mount and MagSafe car charger.
www.esrgear.com
Reactions: owking7967 and lorkkrue

theBigD23 said:
You can still plug in a charger
Click to expand...

What? A charger? What are you talking about? I want a MagSafe mount for my dashboard.
Reactions: Huck
L

I purchased this when it came out and it didn’t work for me. The magnet is weak and the clip for the actual vent wasn’t sturdy enough. But maybe it’s one of those situations where it will vary depending on your car (I own a Model S)
Reactions: ignatius345, SuperCachetes, rjp1 and 1 other person

Noah Bloom said:
"I'm not often in the car these days so I haven't been able to do extensive testing on how well the magnetic connection works."

Maybe have somebody who does drive review it then? lol
Click to expand...

I did test it on several drives, FYI, on different roads and for several hours. Just wanted to clarify that I have not been able to use it day in and day out and have not been on super rugged terrain. Not sure any of us here at MR are in the car much at the moment.
Reactions: Noah Bloom, neliason, CPx and 1 other person

GreenBee77 said:
I got this one off Amazon and it works very well and blends in - wireless charging as well.

Not an affiliate - bought it, use it... works great.
View attachment 1696310
Does not give the same “Bling” you get with an actual MagSafe charger from Apple though.
Click to expand...

This one is currently at 1 out of 5 stars on Amazon - 2 reviewers said the magnets are not strong enough, especially for the Max - falls off at slightest touch. Can you confirm or deny?
Reactions: WitchDoktor and Mrjetsondc

mnsportsgeek said:
I'll definitely grab something like this when I upgrade in 2 years. Keeping my car for another 5 or so which doesn't have carplay. Probably not a $40 plastic version. In 2 years I expect several options.
Click to expand...

If you get a car with Car Play then you don't need a mount, just throw it in the center console.
Reactions: FightTheFuture, decypher44, Rocko99991 and 1 other person
You must log in or register to reply here.
Share:
Facebook Twitter Reddit Email Share Link
Register on MacRumors! This sidebar will go away, and you'll see fewer ads.
Sign Up
Top Bottom