Samsung today announced that mass production has begun on a new NVMe PCIe solid state drive in a ball grid array package, the first of its kind to be available in large quantities. The SSD, called the PM971-NVMe, is tiny, merging all SSD components into a package that's smaller than a standard U.S. postage stamp. 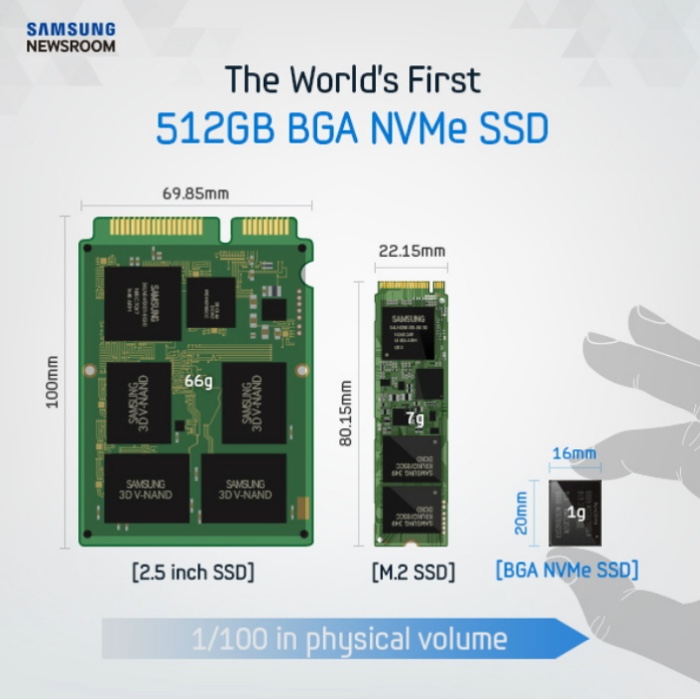 Designed for next-generation PCs and ultra-slim notebooks, the PM971-NVMe measures in at 20mm x 16mm x 1.5mm and weighs approximately a gram. Its volume is about a hundredth of a 2.5-inch SSD or HDD, and it offers performance able to surpass a SATA 6Gb/s interface with sequential read/write speeds of up to 1500MB/s and 900MB/s, respectively.

According to Samsung, it takes 3 seconds to transfer a 5GB-equivalent full-HD movie and is up to 1500 times faster than a standard hard drive when it comes to random read/write input output operations per second (190K and 150K, respectively). Samsung plans to offer the SSD in 128, 256, and 512GB configurations. 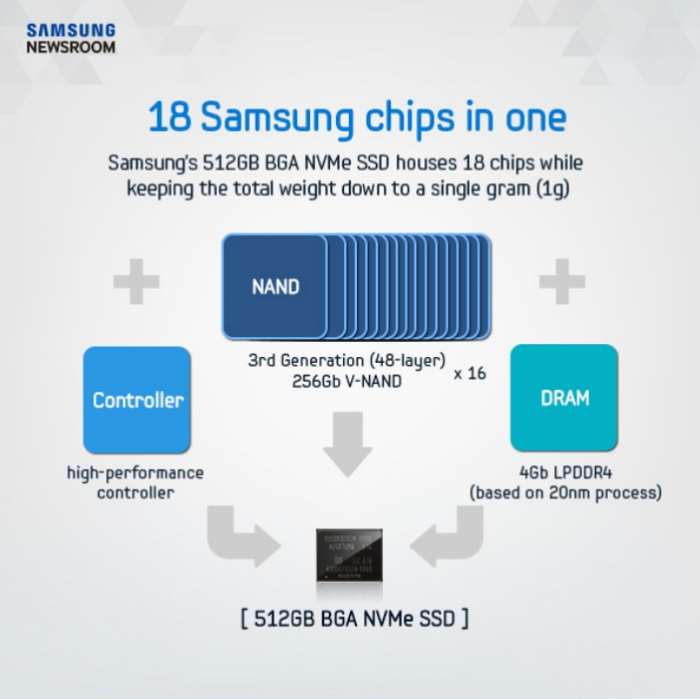 Apple has used Samsung SSDs in its Mac machines in the past, and it stands to reason that the company could adopt Samsung's newest technology in the future. There's no guarantee that will happen, but Apple often likes to include cutting-edge technology in its products.

Apple has been using a faster NVM Express interface for the SSDs of its most recent machines, starting with the 12-inch Retina MacBook. Intel is also developing next-generation 3D Xpoint SSD technology that's set to launch in 2016 in its forthcoming Optane solid state drives, another hardware option that may be of interest to Apple.

Is this what love feels like?
Reactions: Konrad74, Nebulance, Avieshek and 14 others

...but Apple often likes to include cutting-edge technology in its products.
Click to expand...

Jokes aside, this sounds awesome.
Reactions: rjohnstone, DogHouseDub, Konrad74 and 24 others

This is pretty cool!
Reactions: Sandstorm
A

Have there been any studies about the reliability of these growingly complex SSD's vs traditional spinning drives? Just curious....
Reactions: robu2, Saucesome2000, Apple Knowledge Navigator and 1 other person

I'm sure Apple will rush to get this soldered and non-upgradable storage into the Macs as soon as possible!
Reactions: ToomeyND, idealtracks, Santabean2000 and 17 others
G

Don't worry everyone, the next iMac will still come with a 5400rpm drive.
Reactions: ruimpinho, Dave Walker, mi7chy and 69 others
M

Why is Apple even using spinning hard drives anymore? Especially 5400rpm ones!
Reactions: ruimpinho, MacMan988, Radeon85 and 5 others
L

Gotta hand it to Samsung with this one. That's amazing!
Reactions: ToomeyND, ruimpinho, rjohnstone and 6 others
F

Did Samsung invent and design this, or fabricate it to some inventors specs - could be a large R&D dept. of a major corp. or a garage genius?

Oh yeah that's absolutely amazing, I wonder how much it'll cost though. Let's all pray within the next few years, I'll be able to buy a SATA 1TB SSD for $100!
Reactions: Dave Walker, Avieshek, TMRJIJ and 1 other person

First of all, this is great.
Second, I wonder if the limit of 512 is about physical limit or a business decision.
Reactions: Avieshek, foxkoneko, 69Mustang and 4 others

redheeler said:
I'm sure Apple will rush to get this soldered and non-upgradable storage into the Macs as soon as possible!
Click to expand...

Ah yes, the little room you have to make a slide in/press-on or similar mechanism work... not.
It's all about shaving off that one millimeter, because you know, the bag you carry your MacBook in gets smaller and smaller by the day and as we all know we carry more and more paper competing for space... Wait...

Your MacBook broke? Too bad, here, we'll fix it for 700 bucks, because we have to replace the entire ****ing board for you.

PS: My backstory with soldered-on parts is my older iMac's soldered-on GPU... I'd love to put it to good use again, but no way in hell am I going to spend north of 400 bucks on an entire logic board just to fix a faulty mobile GPU that's over 10 years old.
Tell me more about how green you are, Apple...
Reactions: ToomeyND, rjohnstone, AleXXXa and 4 others
I

MacRumors said:
..., but Apple often likes to include cutting-edge technology in its products.
Click to expand...

Before I owned any Apple products, this was always my impression of them. Would love to see Apple on the cutting-edge again.
Reactions: idunn, TheRealCBONE, AleXXXa and 6 others

These won't be seen in a mac for another decade, sorry peeps.
Reactions: AleXXXa, Avieshek, Adithya007 and 3 others

Trusteft said:
First of all, this is great.
Second, I wonder if the limit of 512 is about physical limit or a business decision.
Click to expand...

Probably a mixture of both. They need to recoupe some of the initial investment to date to continue the process. The R&D on this must have been billions. So management probably ant to start seeing a return. Which is perfectly understandable.

If this is included in the next few Macs would be nice for Apple to actually acknowledge the effort from Samsung on this, not taking all the credit claiming it is down to them.
Reactions: AleXXXa, vmistery and Trusteft

garirry said:
Oh yeah that's absolutely amazing, I wonder how much it'll cost though. Let's all pray within the next few years, I'll be able to buy a SATA 1TB SSD for $100!
Click to expand...

You and me both, man.
Reactions: JPLC

Hold on, let me take out a second on my house and I'll buy one.
Reactions: Adithya007, 69Mustang and kdarling

How does the read/write speed compare to RAM?

If you're talking about writing 5 GB in 3 seconds... that certainly sounds like it's in the realm of RAM speed to me.

You could transfer an entirely TB of data in under 10 minutes and 30 seconds.
Reactions: Avieshek and V.K.