Samsung today hosted a media event in New York City, where it introduced the all-new Galaxy Note7 with an updated S Pen, a new Gear VR headset powered by Oculus, and the Gear 360 camera. All three products will be available in the United States on August 19, with pre-orders starting tomorrow. 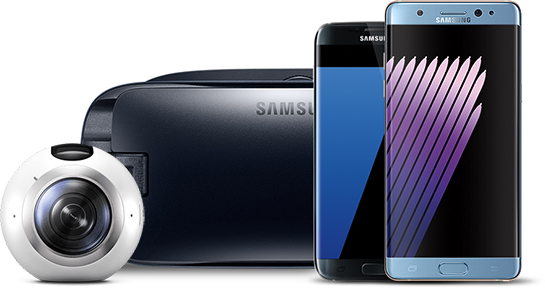 Additionally, the Galaxy Note7 features a built-in iris scanner for unlocking the smartphone with your eyes, 64GB of internal storage expandable up to 256GB with a microSD card, a larger 3,500mAh battery, 802.11ac Wi-Fi, Bluetooth 4.2 LE, NFC for contactless payments, and a USB-C connector. The device will run Android 6.0.1 Marshmallow out of the box, eventually followed by Android 7.0 Nougat.

Samsung complemented the new smartphone with an updated version of its S Pen. The stylus features new Air Command functions, including Magnify and Translate, that enable users to zoom in on the screen or convert languages with a simple hover gesture, along with double the pressure sensitivity and a smaller 0.7mm tip geared towards providing a more ballpoint pen-like experience.

The Galaxy Note7 in Blue Coral, Silver Titanium, and Black Onyx launches at AT&T, Verizon, Sprint, T-Mobile, and U.S. Cellular on August 19. Pricing will be similar to previous Note devices, amounting to around $750 to $800. The smartphone will also be available at Amazon, Best Buy, Car Toys, Sam's Club, Target, and select Walmart stores. An unlocked version will be released at a later date.

"It comes with brains", says the video. So you know it's really good.
#SamsungRumors
Reactions: MaloCS, yanki01, DemetriJ and 5 others
Comment

Can anyone tell me, am I reading Macrumors right now?
Reactions: Ladyc0524, TheHorrorNerd, VMMan and 31 others
Comment
T

I still find it hilarious that Samsung, pre-iPhone 6, misread what Apple was doing with "curved glass" and thought they meant curved screen, and doubled down on this idea...and now they are stuck pretending like anyone ever wanted that.
Reactions: zzLZHzz, hassaan22, Ladyc0524 and 38 others
Comment
D

Someone has to release hardware. If apple doesnt then at least we can read about samsung and the rest.
Reactions: prspectiv2, Demo Kit, SoSickSadNslOw and 56 others
Comment

Funny how they reduced the camera from 16 mp to 12 mp. I guess they're finally acknowledging that more megapixels doesn't mean a better picture.
Reactions: tripmusic, ielessar, zzLZHzz and 34 others
Comment
J

They forgot to remove the 3.5mm headphone jack
Reactions: Lopov Jack, tripmusic, hassaan22 and 37 others
Comment

DISAPPOINTING!! Basically same as the last years model. I don't give a sh*t about the iris scanner. I guess I'll wait for the iPhone 7.
Reactions: mytawalbeh, alexmarchuk, dan911 and 5 others
Comment

Good luck outperforming the A10 chip. As always, it won't come close.

EDIT: Even the A9 chip has a faster Single-Core score. The Note 7 has a faster Dual-Core but most tasks are typically done with a single core.
Last edited: Aug 3, 2016
Reactions: tripmusic, zzLZHzz, urtules and 20 others
Comment

Thanks for letting us all know your past and future purchasing plans.
Reactions: ielessar, hassaan22, sransari and 27 others
Comment

I thought this site was called MacRumors not SamsungRumors. At this point are new phones from Apple competitors really that newsworthy?
Reactions: mytawalbeh and DavidSki
Comment
E

Are the comments bashing Apple at every turn? Did anyone say Steve would never do that? Do people claim Apple no longer innovates?

Then yes, you're in the right place.
Reactions: hassaan22, srminton, pratikindia and 26 others
Comment
7

I wouldn't mind trying one for fun, but I really wish it had stock Android 7.0... I cannot stand these 3rd party android wraps... Well, hopefully Apple has a few surprises next month

.. I am kinda disappointed that Samsung basically released a Galaxy S7 Edge+
Reactions: Ladyc0524, MaloCS, ICEMAN-sven and 3 others
Comment

I'm not going to lie, the Note 7 looks really sharp and innovative.It's tempting,
But I remain loyal to Apple, even though iPhone 7 does not really have me excited.
Reactions: prspectiv2, Ladyc0524, MaximizedAction and 12 others
Comment

Looks amazing to me...
Reactions: WhySoSerious, Menneisyys2, dazz87 and 15 others
Comment
M

You've been here since 2013. Major Samsung product reveals have always been given an article or two by this site. Nothing new.
Reactions: AppleScruff1, Ladyc0524, Oalico and 23 others
Comment

What's that in your pocket? A VR headset? Or are you just happy to see me?
Reactions: Dydegu, FasterQuieter and vmistery
Comment

Planning on replacing my 6+ with a Note 7 ("black onyx" model). Zero interest in the next iPhone. Nothing Apple can do to the hardware will get my attention. It's all about the software, which has seen very few practical changes / feature additions. iOS 10 is really iOS 9.4. This snail's-pace "innovation" by Apple has finally gotten too old for me. Even a jailbreak isn't saving me like I thought it would.

That said, I'll have a 20-day return window, just in case!
Reactions: Demo Kit, YMark, pjanders and 21 others
Comment

Also, if Samsung would just remove their damn name from the top front and redesign that speaker up top then the phone would be so much more appealing to me.
Reactions: Ladyc0524, pjanders, c0ppo and 4 others
Comment
I