While Apple has for several years offered a replacement program to users whose MagSafe adapters (as well as pre-MagSafe "barrel" style adapters) have exhibited signs of strain relief problems, the company has updated its support materials to reflect that a settlement has been reached in a court case over the design of the connectors.

The settlement will provide a cash payment if you are the original owner (by purchase or gift) of certain Apple MacBook or MacBook Pro computer models ("Subject Computer") or separately purchased an Apple 60W or 85W MagSafe MPM-1 ("T") Power Adapter ("Adapter"), your Adapter showed signs of Strain Relief Damage, and you purchased a Replacement Adapter within the first three years following the initial purchase of the Subject Computer or Adapter. If the court approves the settlement, you may be entitled to a cash payment in the following amounts depending on whether you purchased your Replacement Adapter during the first, second or third year following the initial retail purchase of the Subject Computer or Adapter: (a) first year, the actual amount you paid (excluding taxes and shipping/handling fees) up to a maximum of $79; (b) second year $50; (c) third year $35. There is a limit of three refunds per Subject Computer. You may also be able to obtain a Replacement Adapter at no charge from Apple if your Adapter shows signs of Strain Relief Damage now or in the future.
Click to expand...

The settlement program is open to all purchasers of machines with T-style MagSafe power connectors who provide a valid claim form and proof of purchase for the replacement adapter. Users have until March 21, 2012 or three years from the date of original purchase, whichever is later, to file a claim for a previously-purchased replacement adapter. Apple will cover current and future replacements free of charge through December 31, 2012.

They must have been using them wrong.

I have never seen the 2nd pictured L style connector. What does that come with? It looks hideous

I've gone through several L MagSafe adapters from fraying at the connector. Apple has replaced them all under warranty.

I had a first gen Macbook Pro and when the connector started to fray, they replaced it right away for free even though it was out of warranty

Have one since 2006 and it's still looking quite good. It looks exactly how you use it.

I can't say that I like the L-Style connector though, it either points out back, or forward blocking a couple ports.

Never seen a Mac with that issue.

But good news for clumsy folks.

It appears that compensation is restricted to US residents. A little unfair, I feel - as I would meet the criteria for repayment if I were US resident

I can't say that I like the L-Style connector though, it either points out back, or forward blocking a couple ports.
Click to expand...

Same here. What are people doing that they keep fraying- especially the poster who stated he went through SEVENTEEN MagSafe adapters. That's abnormal and the problem does not seem to be the cords, but the way he's using them.

I also much prefer my T-Style. Much better for my outlet location and the way I work with my MacBook.

Apple is not responsible for your dog or cat chewing on the cable or someone obsessively plugging and unplugging it over and over again.
L

Wow. Ok I had this problem and my adapter stopped working...I didn't know about this program and I just bought a non-apple replacement one 1.5 weeks ago...threw away the old one already. Whatever...It was only $20.

Replace it within 1 year of purchase? What happens if they start to fray after 2 years. I think that's ridiculous. My "MagSafe" adapter is fraying at the part that plugs into the wall. I guess after wrapping it up so many times, it puts strain on the cord. The lesson I've learned from this is that I'll never wrap up a power adapter again. Now I just wad the entire thing into my laptop bag.
M


iRCL said:
I have never seen the 2nd pictured L style connector. What does that come with? It looks hideous
Click to expand...

I think my very first MBA had this connector, still works just fine with the 2011 one.

iRCL said:
I have never seen the 2nd pictured L style connector. What does that come with? It looks hideous
Click to expand...

Over the past couple of years, Apple's given me maybe 5-6 replacements for a couple of different machines. The last time I went in, they gave me an L-style in exchange for the broken T-style.

It's a very common problem among mobile users.
T

tibi08 said:
It appears that compensation is restricted to US residents. A little unfair, I feel - as I would meet the criteria for repayment if I were US resident
Click to expand...

Contact Apple in whatever country you are in and keep "whining" citing this court settlement.

They will eventually give you an itunes gift card or replace it depending on how old it is.

Try a few times until you get to a person that is a little more liberal with replacements etc.

Gotta stay on it though.

I have seen that happen. On my Macs, I always make sure there isn't any strain on the wire so it doesn't do that.
C

My late 2008 MBP has done this. I'm from the UK, does this mean i can get it replaced for free?

I haven't seen it happen yet with a bunch of devices, but then, I've always figured an $80 power cord should be treated well... so while I do sometimes "cram it into a bag," I usually just make sure when I wrap it, that there's a little slack at the end. It's common sense and hardly a problem unique to Apple.

... and yes, I've seen many, many people wrapping power cords like they were clothes line that had to be made as tight as humanly possible.

How long until the fraying issues with the usb dock cables are resolved? Apple cables just flat out suck.

Ironically, I've never had a problem with my MagSafe cables, however.
S

HOW THE **** do you go through at least 17 ****ing cables, then have the gall to blame it on Apple? I mean, do you think that just MAYBE, you're doing something absolutely ridiculous to the cable? In 4 years of owning macbooks and both types of cables, with daily usage, I haven't frayed one. As for the L style, I don't see how its possible to even fray, let alone 7 TIMES. So I'm actually curious to what you're doing to the cable, because you're probably the only human being on the planet that has gone through that many. That, or you're just flat out lying.
R

iRCL said:
I have never seen the 2nd pictured L style connector. What does that come with? It looks hideous
Click to expand...

Just took a picture of my MagSafe connector, as the second L connector in the picture. 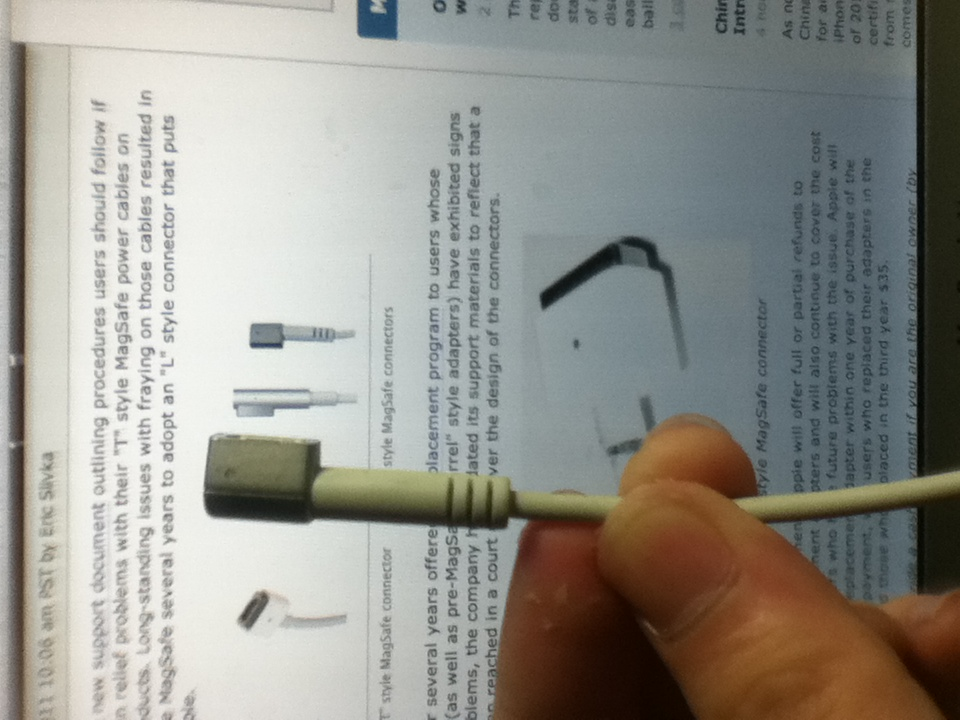 It's from an original MacBook Air, maybe that's why it's a bit ugly.

aristotle said:
Apple is not responsible for your dog or cat chewing on the cable or someone obsessively plugging and unplugging it over and over again.
Click to expand...

well seeing how I don't have a cat or dog or any animals for that matter and cable stays plugged in all the time thats not the issue.. None of my other cables for any of my other electronics have this issue... Think my issue maybe related to cable is so much thinner then all my other electronics and I live in the desert so don't know if the heat has any affect on it.
You must log in or register to reply here.
Share:
Facebook Twitter Reddit Email Share Link
Register on MacRumors! This sidebar will go away, and you'll see fewer ads.
Sign Up
Top Bottom